The normal has become abnormal 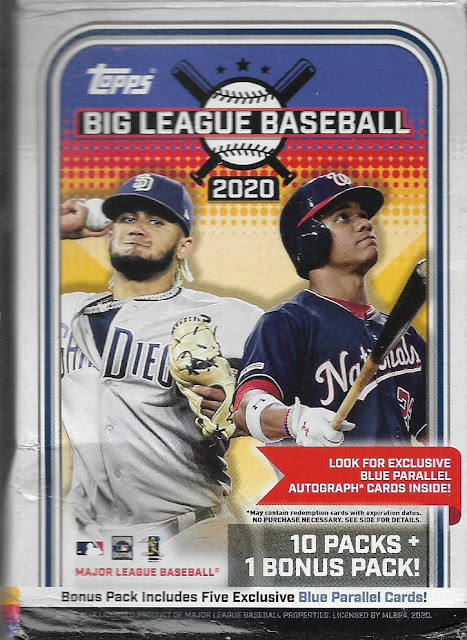 Earlier today, I conducted an interview with someone in the professional sports industry for a story I'll be writing for my job.

As story interviews tend to do these days, talk often turns to COVID and how strange our worlds have become, and she was talking about walking onto an airplane for the first time in three months. Flying is something she does a lot for her job but it seemed bizarre to her at that moment.

"The normal has become abnormal," she said.

What a perfect way, I thought, to describe opening a box of cards.

I have not opened a box of current cards in almost five months, since a blaster of Heritage in late February. What was a monthly, sometimes weekly, occurrence for more than a decade has become a strange animal over the last 150 days.

So that's why when I was opening some 2020 Big League cards for my birthday yesterday, the first Big League I've opened even though the product has been out for more than a month, it seemed so odd to me. "Look at me! I'm opening a box of cards!" is a thought that came out of my head.

The cards were a gift from my wife. I had requested some 2020 stuff to open since I hadn't done so in so long. But don't go to Target or Walmart, I said. You won't find anything there, and also I don't want you being trampled by some dim bulb racing for the last Bowman megabox. Just buy it online.

So she did. The blaster box arrived a bit crumpled as you see above, but everything was safe inside. 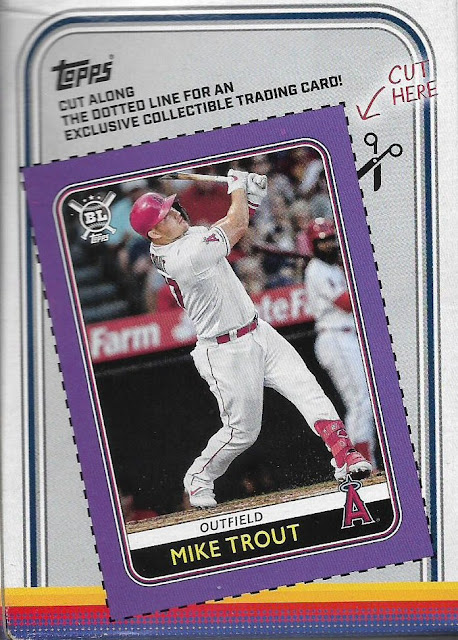 You can see my cut-out Trout card is perfectly intact.

She also ordered three 30-card fat packs of Big League and those arrived safely as well.

Even though I left open the option of her buying Series 2 and a couple of other current cards, I was hoping for Big League because those are the current cards that appeal to me most. The more I see 2020 flagship, the sadder I get. It's so abysmally boring. But Big League is interesting, looks great, reminds me of collecting in the good old '70s and '80s, and adds a few colorful parallels, too.

I already own all of the Dodgers from this set -- parallels excluded -- as I ordered the team set online. So any exciting Dodger content was parallel in nature. That left me open to appreciate the other cards for what they were.

Let's break it up in terms of the three 30-card packs and then the blaster.

Here are the 30-card pack highlights: 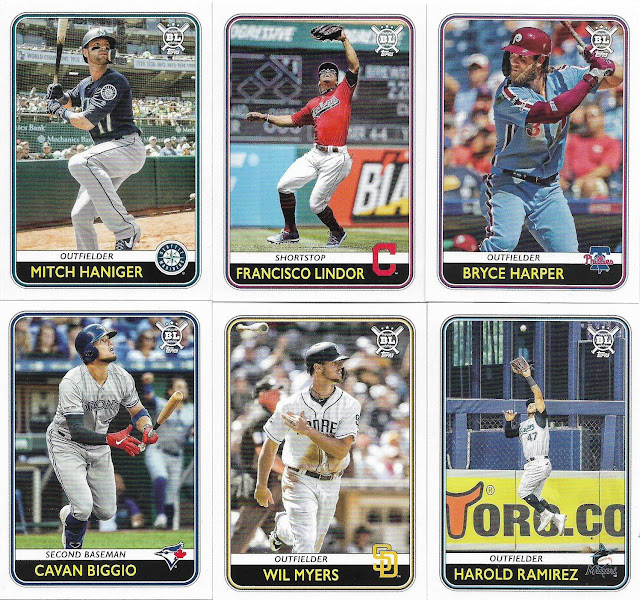 Some of the better images in vertical format. 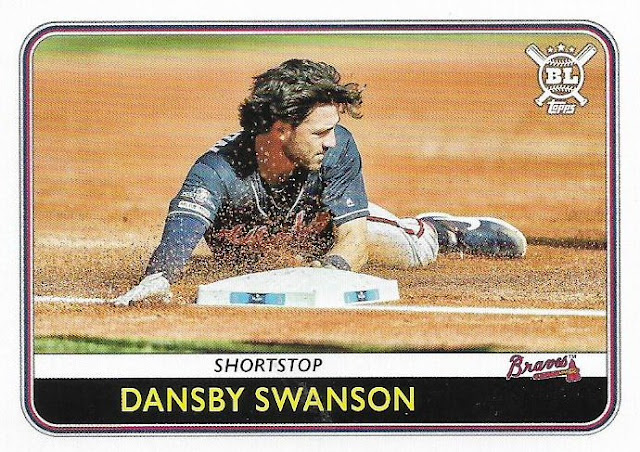 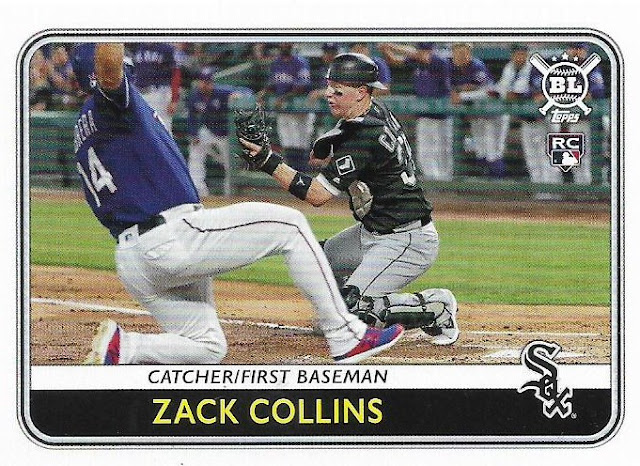 Some of the better horizontals. 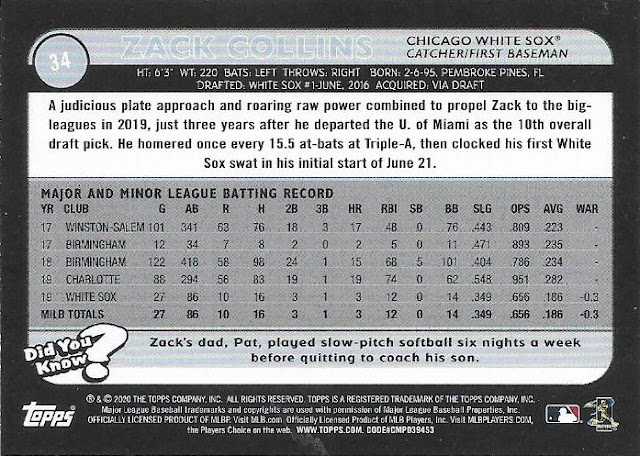 If Big League has any weaknesses -- outside of those caricature inserts it insists on every year and too many league leader cards -- it's the thinking (or not-thinking) about how lettering and coloring is going to present. Gray lettering on a gray background is headache-inducing. Zack's name doesn't even look this clear in hand. This reminds me of when Archives used the 1977 Topps design a couple years ago and thought white lettering inside a bright, yellow flag was a good idea.

But to balance the good with the bad, I've gotta bring up the great factoids that Big League produces every year and I don't know why that's confined to a "kid-friendly" product. 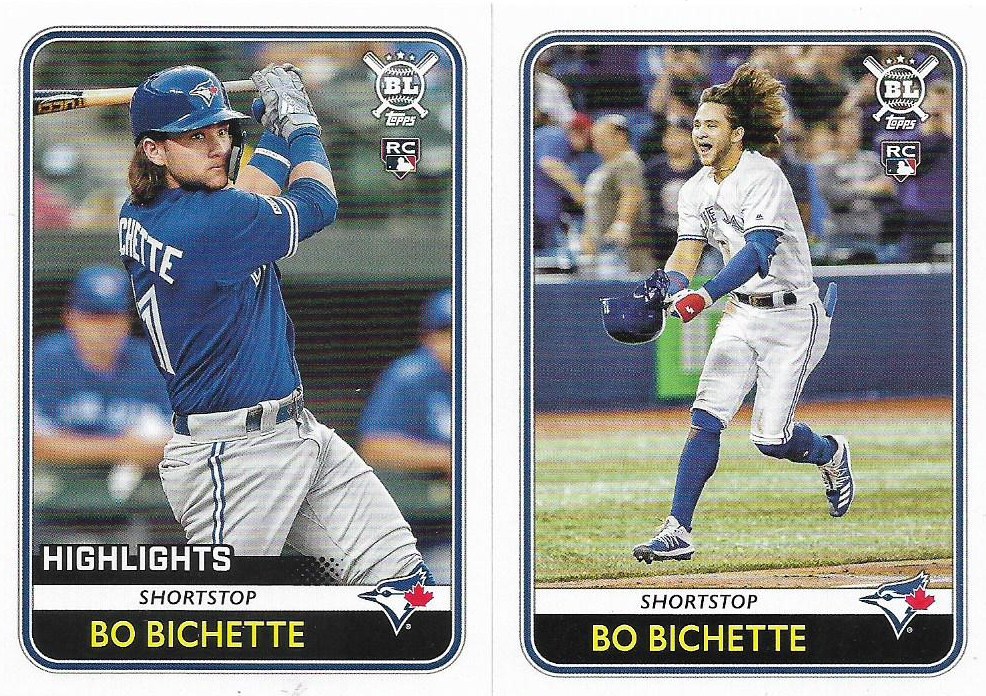 Wooo! Double Bichettes! This is a certain video breaker's wet dream. If you know to whom I'm referring, I love how he always lists these rookie cards or "hits" as his favorite cards in a box. It can never be a non-rookie card without fabric or scribbles attached to it. 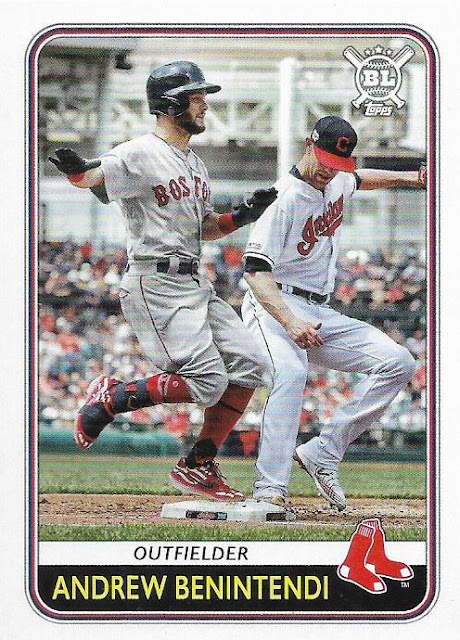 For example, this is probably my favorite card out of the fat packs. It's one of the best photos in the set. Video-breaker dude would ignore it. 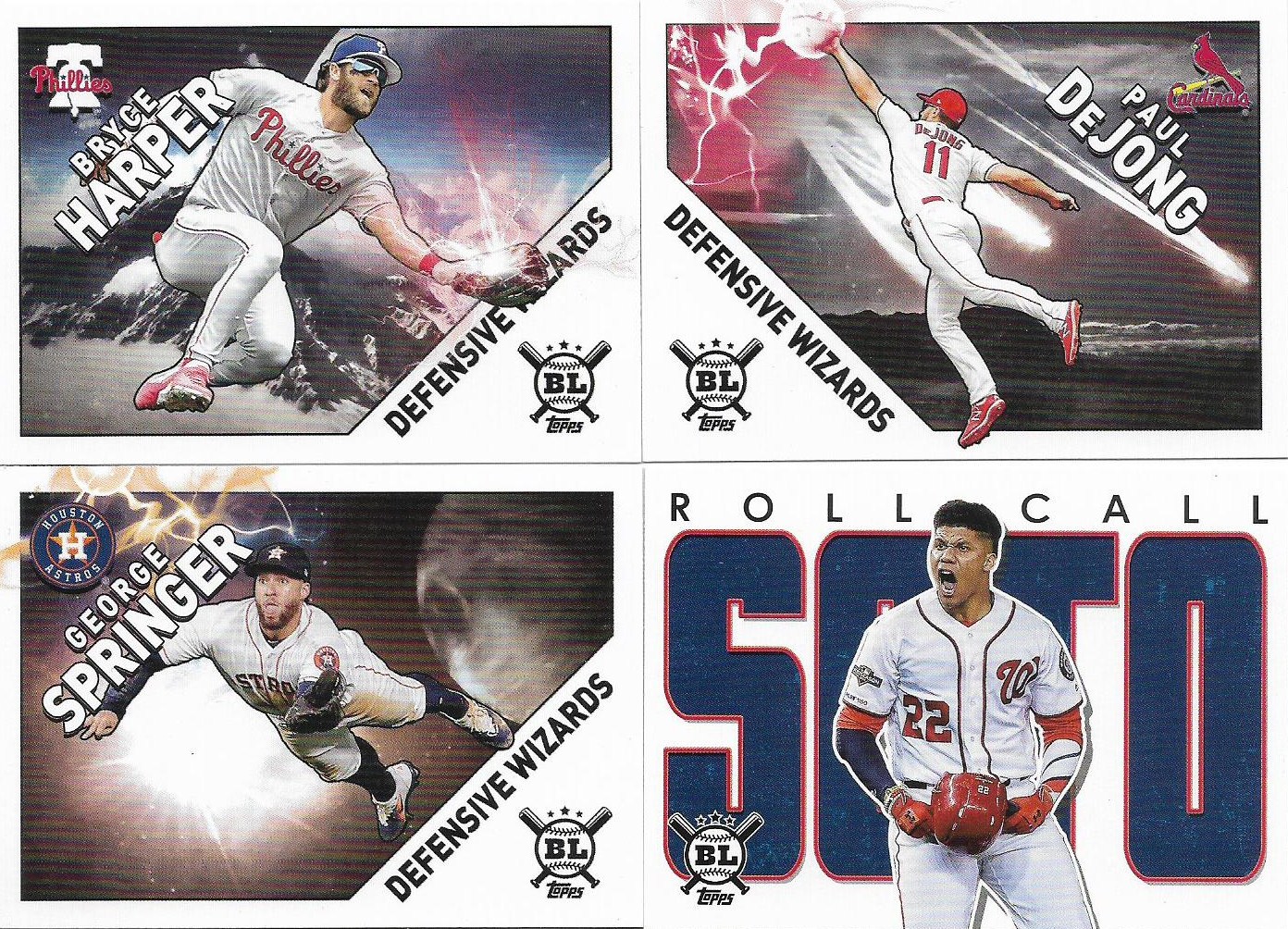 Some of the inserts from the fat packs. I'm not showing everything because a few of what I pulled is destined for fellow traders or has even already been sent off (sure feels good to have some modern cards to send people again). 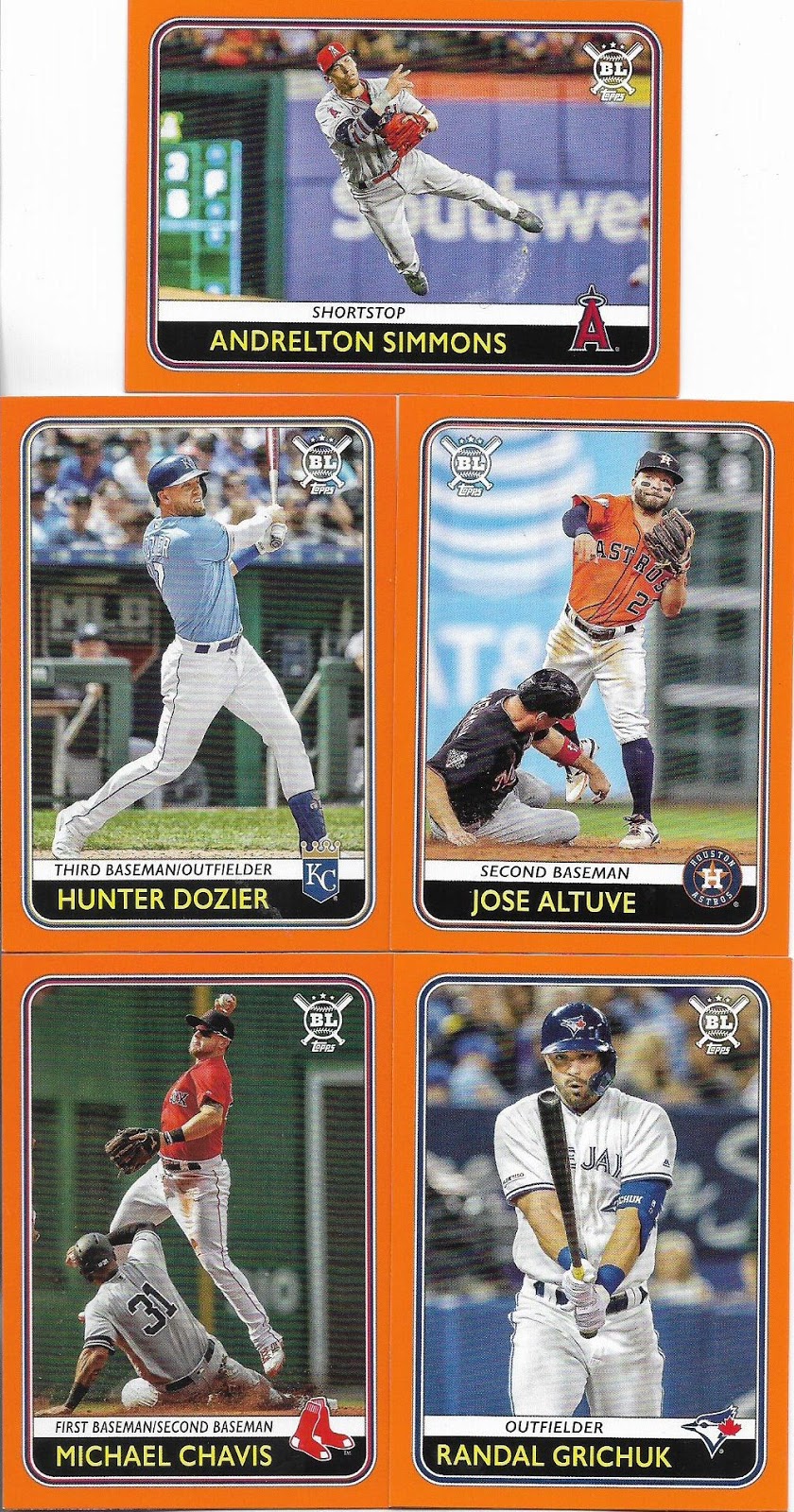 Again, not all of the orange parallels I pulled out of the fat packs. One in particular is in the post office's grubby hands currently. 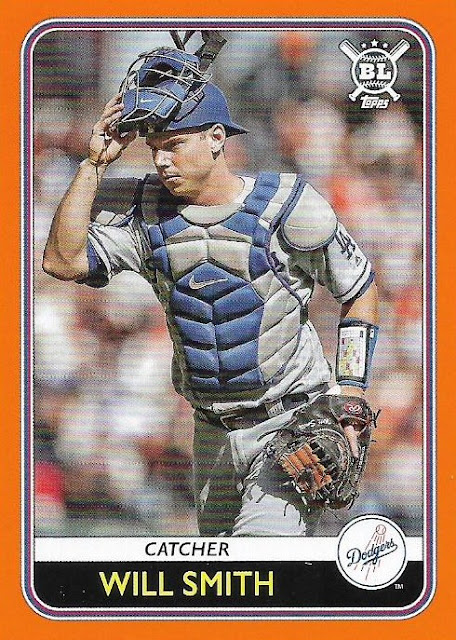 But this one stays with me. 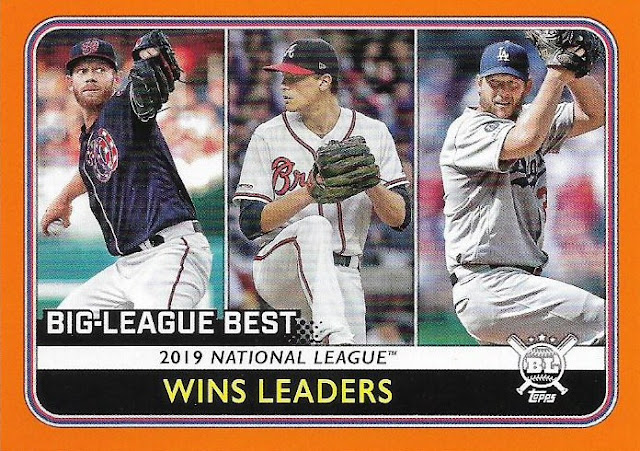 Oh, and I guess this one. There are so many Dodgers in the leaders cards that it makes parallel hunting triple the work. Not that I'm trying that much.


So, those are the highlights of the fat packs. Let's move on to the dented blaster. 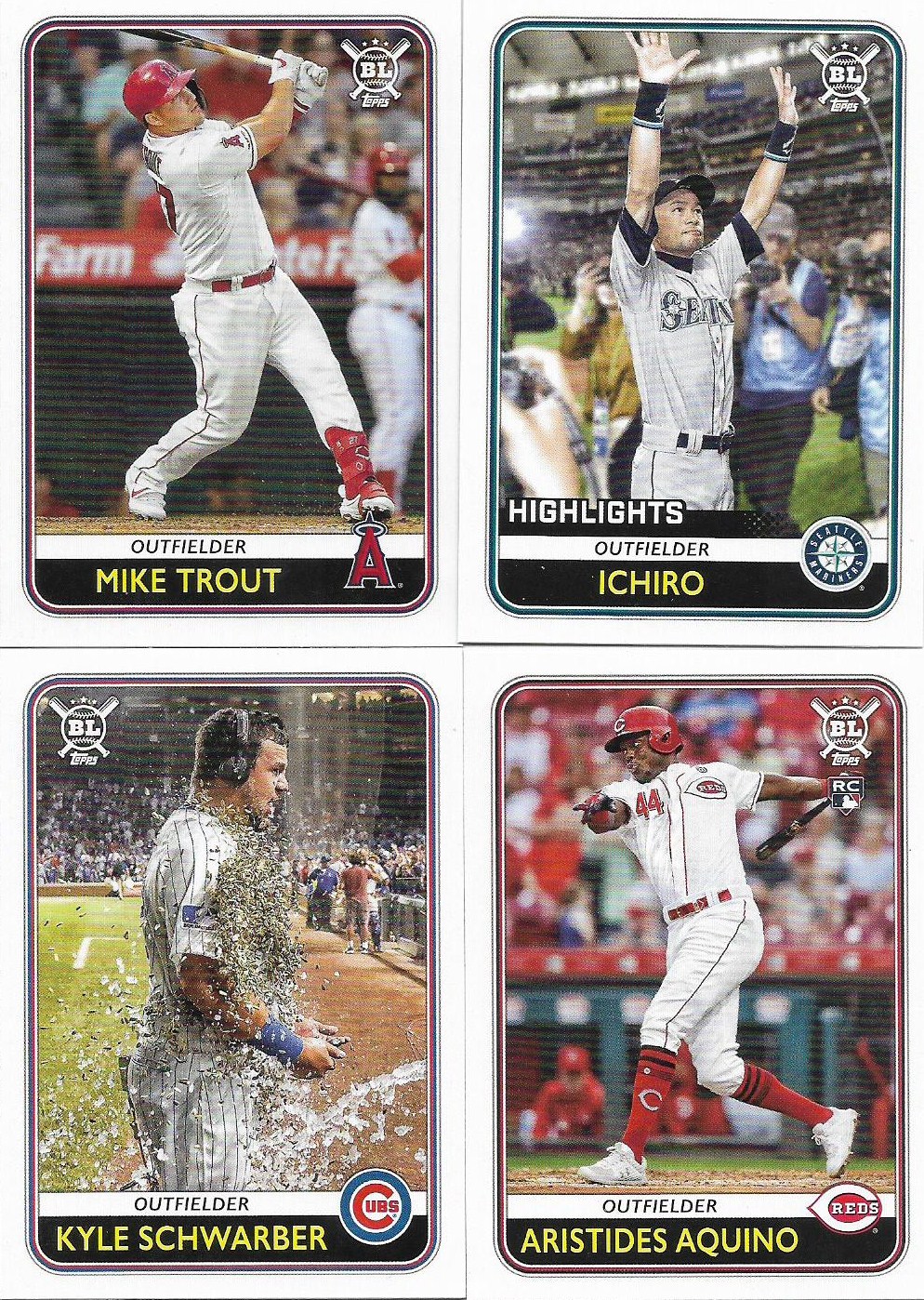 A few of the vertical highlights. 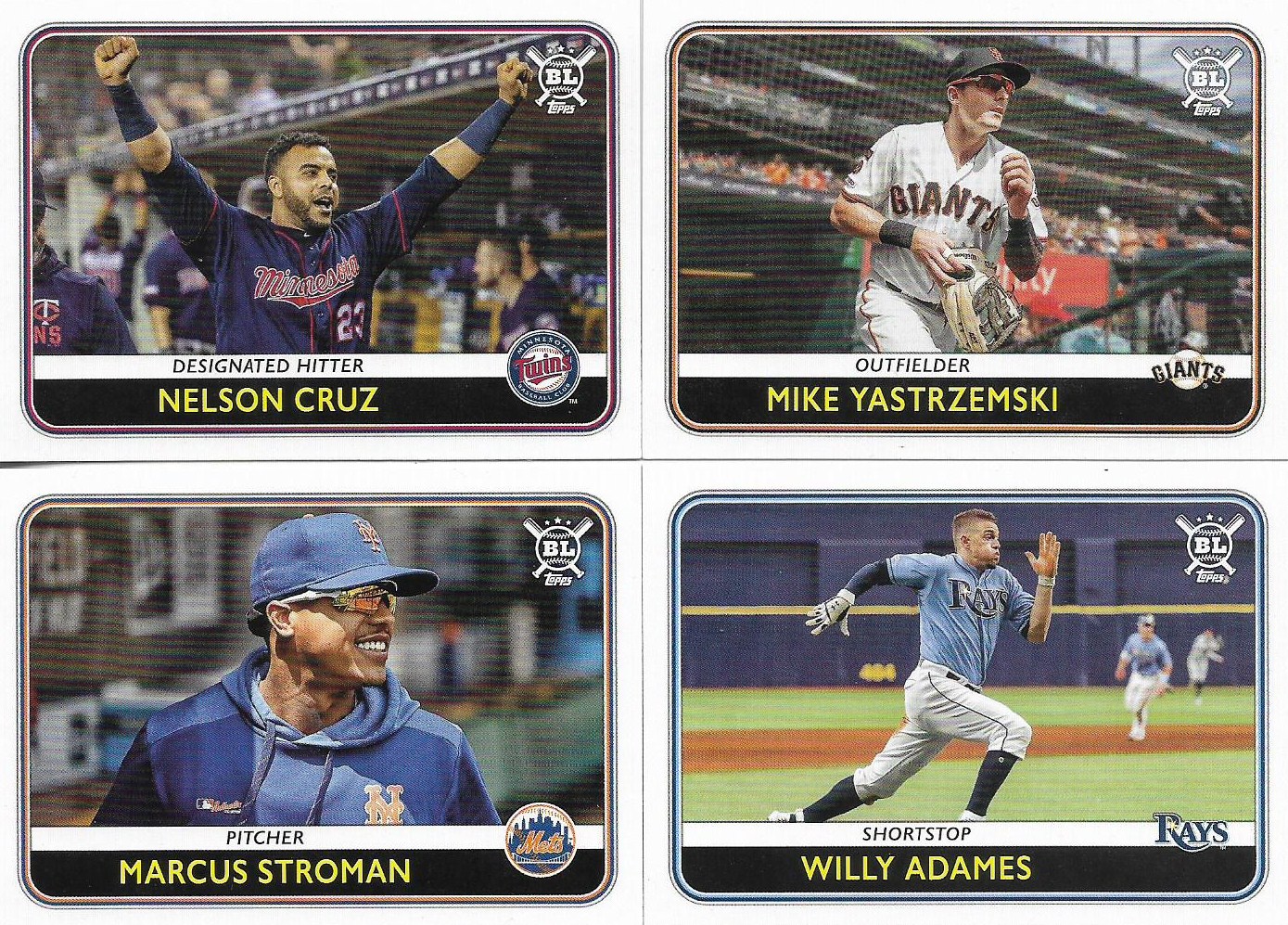 Some horizontal highlights, although the orientation of the Stroman card is kind of odd. 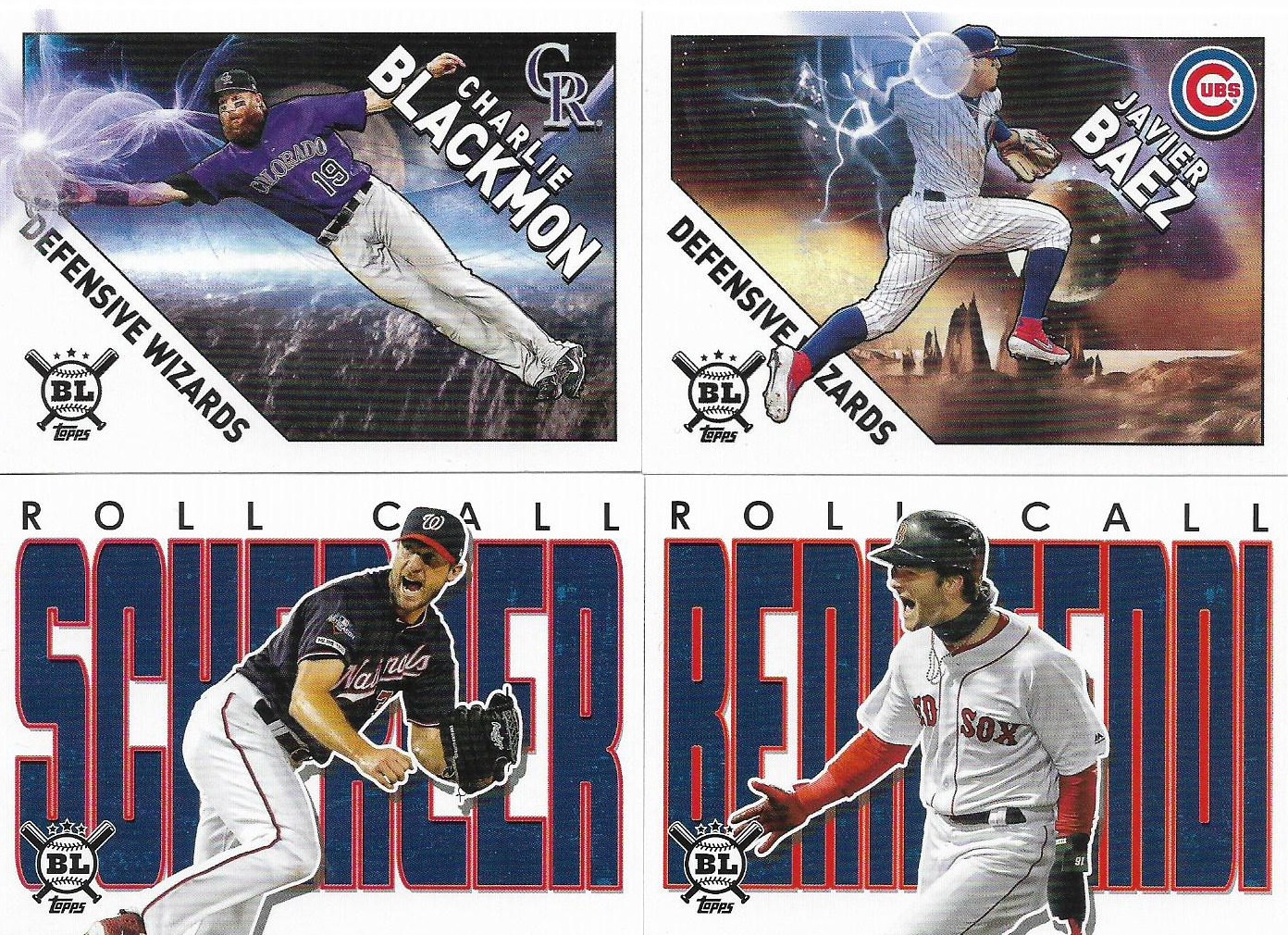 A few more of the inserts that aren't packaged up/destined to be packaged up! 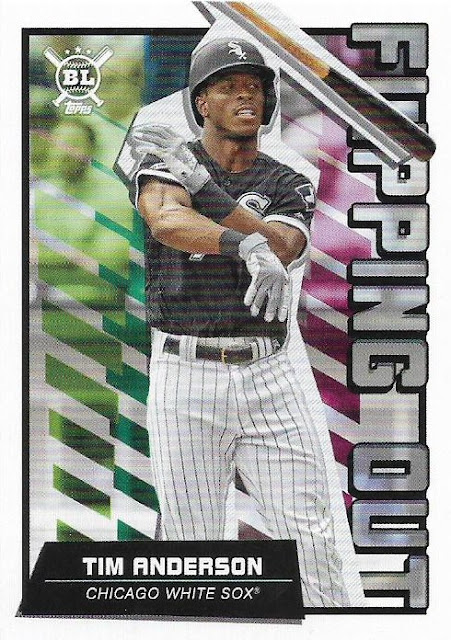 The Flipping Out inserts don't do a lot for me just because they're a little too 1993 Topps Kids (OK, maybe it is a kids product). But I like this one because Tim Anderson's bat flipping is so damn aggressive. He's going to put out an eye some day. 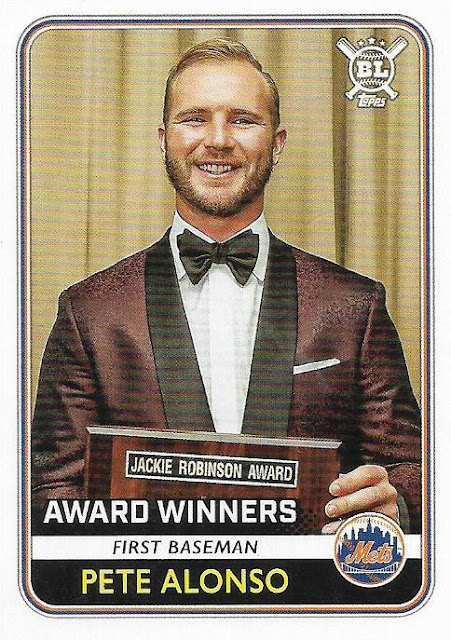 Pete Alonso is a little too young to look like a dad but he's getting there. 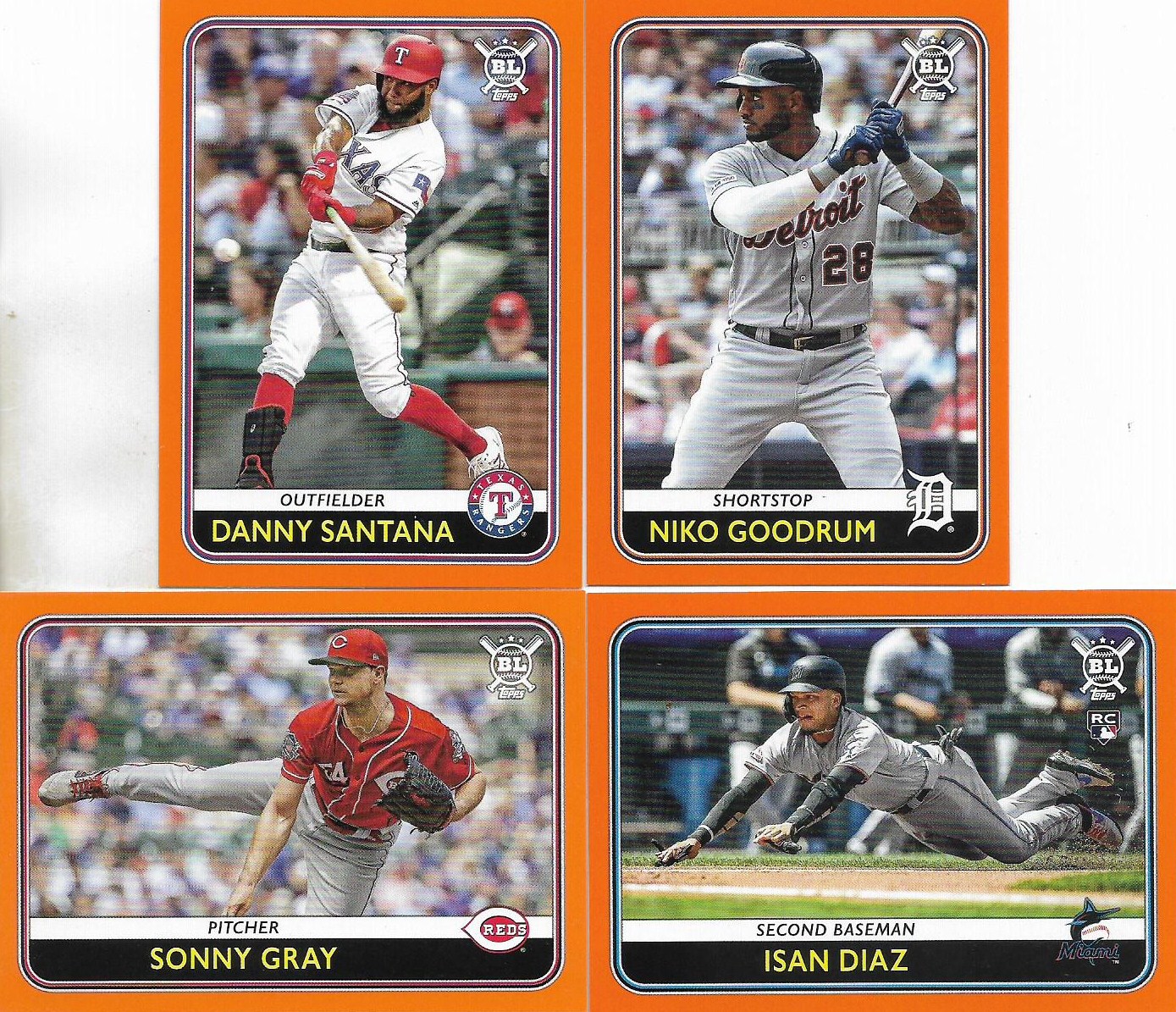 Some of the orange parallels from the blaster that I'm showing. 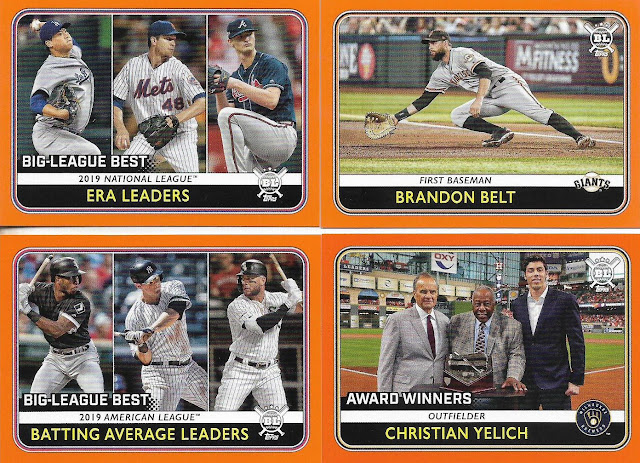 And that's some more. It's interesting that Hyun-Jin Ryu is shown as a Dodger in the league leader cards but he's photoshopped into a Blue Jays uniform on his own card. 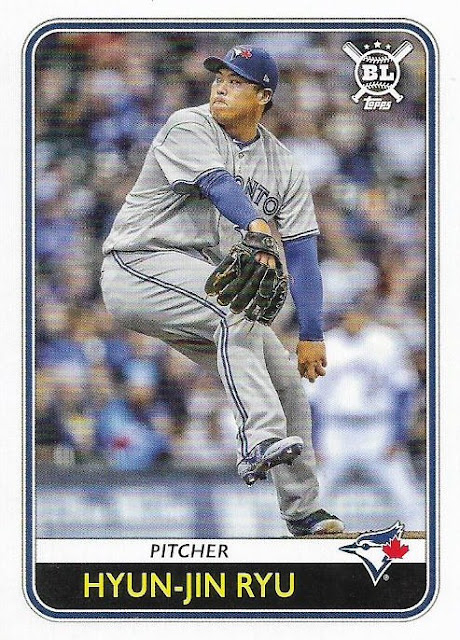 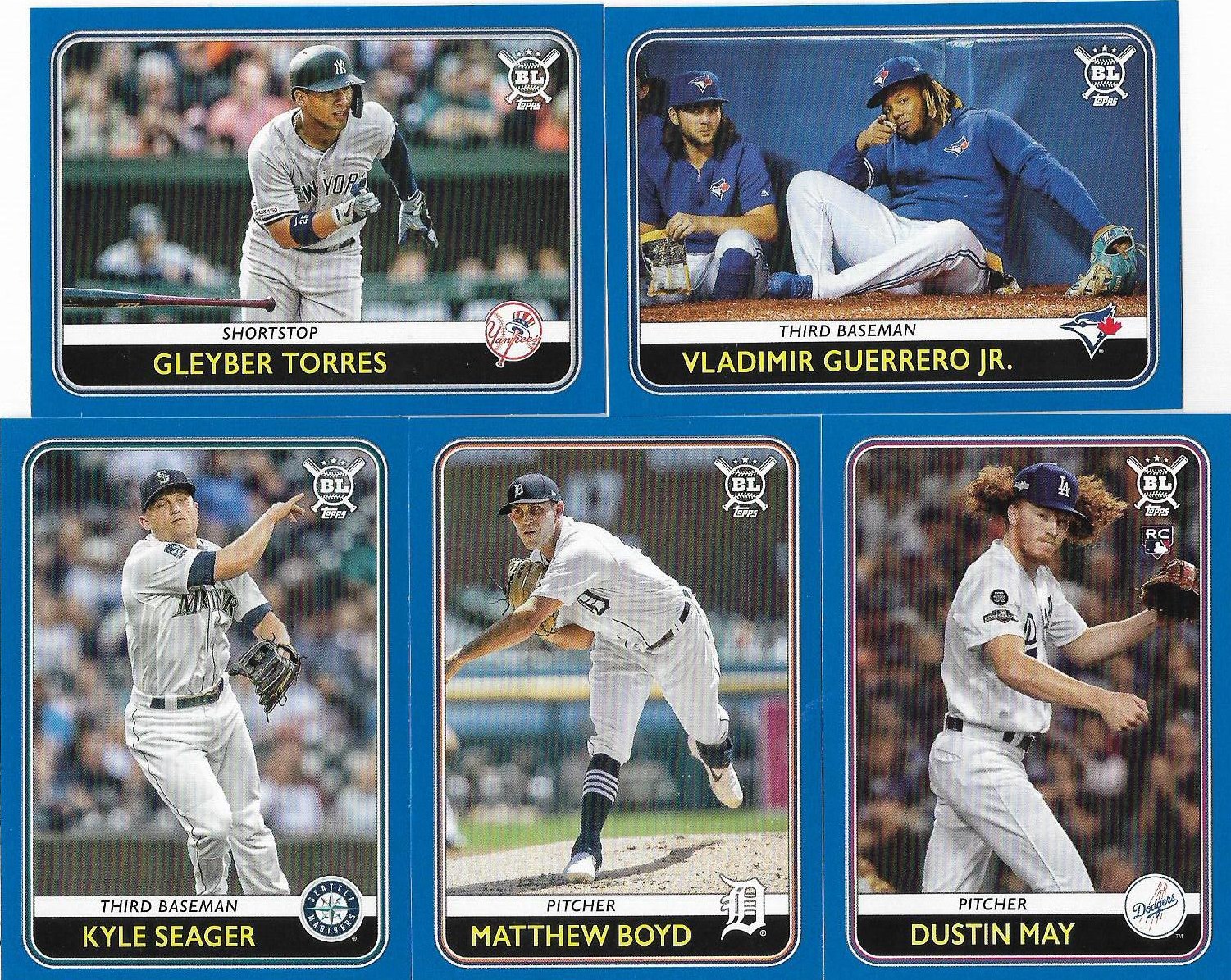 Each blaster comes with a pack of five blue parallels and my wife picked very well with these.


This is at least the second straight year that I've received cards for my birthday, which is an excellent trend, but also probably why it felt a little abnormal as I'm not quite used to that, given all the other years when birthdays were card-free.

So I guess this card opening experience wasn't all that normal. Let's call it "abnormal on top of abnormal".

But it's the good kind of abnormal.

Mike Matson said…
I love Big League. I think if there's any modern sets I want to collect, it's Big League and Archives.
Love the number of Jays you showed here too..
July 17, 2020 at 7:37 PM

Elliptical Man said…
She got you some nice cards.

- I like the Harper in the old school Phillies uniform.

- Too many ho cards for my liking. Both Gleyber and Vlad Jr. were hurt by this.

bbcardz said…
The Will Smith card is nice but would probably look better as a blue parallel. Nice stuff!
July 17, 2020 at 8:40 PM

John Bateman said…
The Benintendi card is one of the most unique looking shots ever on a main set baseball card. I know I have not seen every Baseball card in the last 25 years but I can not think of another card that shows a hitter, pitcher and 2 sides of the first base bag in one shot. You would think that because this type of play seems to happen a lot in baseball it would show up on a regular issue baseball card more.
July 17, 2020 at 8:57 PM

Johnnys Trading Spot said…
I like this years' Big League better than Flagship, and I like Flagship this year.
July 17, 2020 at 9:29 PM

Fuji said…
However collectors want to describe this product... it's still my favorite product of 2020. Every time someone writes a post on this stuff, I find a new card I love. Can't wait to get my hands on a complete set of this stuff.
July 17, 2020 at 10:53 PM

Nachos Grande said…
Big League reminds me of a lot of the reasons why I love the Collector's Choice line from Upper Deck (say from 1997 - 1999 in particular). The one downside for me is that the inserts don't interest me as much in Big League, I like the stickers and bobble head inserts from the CC line (which probably means I'm nothing more than a big kid but that's okay by me).
July 17, 2020 at 11:26 PM

First think I would do is cut out that Trout card on the box bottom!

acrackedbat said…
Hope your birthday was fun! I think these cards are proof that is was! BL hits the spot this year. Benintendi's card is striking. I had one for about five minutes. It was cardnapped. I may have to put this on a w/l for myself. Not sure how you managed to get the Trout blaster but it is the best choice.
July 19, 2020 at 4:21 PM