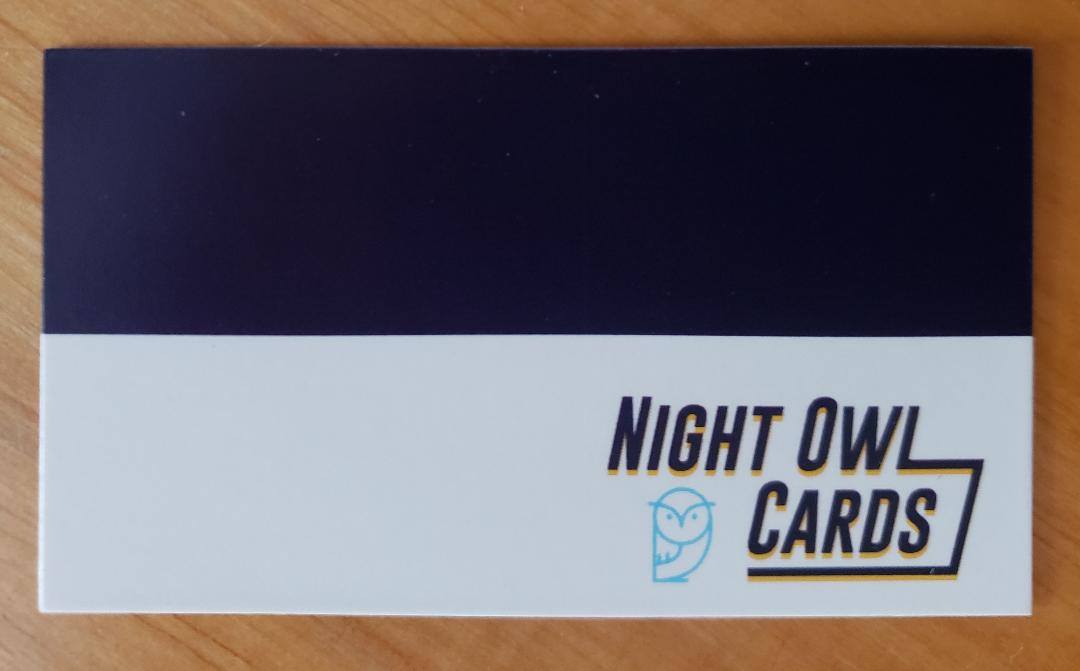 Here's some branding news for the blog:

Night Owl Cards has its own business cards!

The business cards feature the new logo for Night Owl Cards. I'll probably periodically distribute these with trades so I can look a bit more professional than the traditional "scrawled-on-a-cut-up-piece-of-paper" notes that I've been using for the last decade.

The cards look particularly sweet, I think, because, like the logo, it was designed by my daughter, who is a college graphic design major. You should have seen me stumbling along with my business-card graphic concept until she took it over and devised something waaaaaaaay better almost instantaneously.

Like all good two-dimensional cards, the business cards have informational backs, as well. 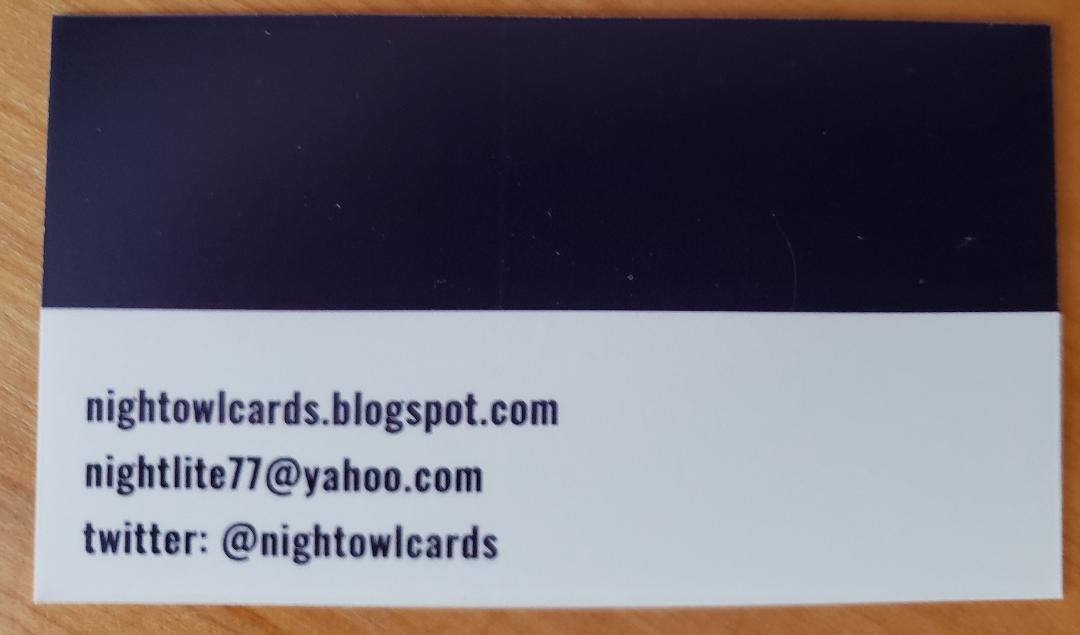 That's everything you need to know when dealing with me.

My primary objective with the cards was simply to get the logo some publicity. Since Blogger makes it difficult to present the new NOC logo front-and-center in any kind of tasteful way, I've had to place it on my sidebar. I know people still check the sidebar, but it's not visible when anyone first visits the blog. So I'm trying to increase the visibility of the logo.

To that end, I'm trying to think of other ways to make the logo visible. I may look into T-shirts. I have no idea who would want one (besides a couple of family members and ... um ... me), but if I get wind that anyone is interested I may give it a go.

Other than that, I'll check out what's available. I am immune to anyone thinking I'm big-timing everyone. This blog has never included any advertising outside of what I do for the blog, and this is along the same lines. But I don't want to do anything that, if I was on the other end, would make me wince.

But, also, my kid is talented and her work should be publicized. It's been difficult for college-age kids to get even part-time jobs in this pandemic environment. The place where she worked on campus shut down and who knows when it's going to return to business. So whatever I can do is what I'm going to do.

Meanwhile, business cards aren't the kind of cards that you come to this blog to see. So, I have a few items from the last couple of giveaways that other bloggers have staged. 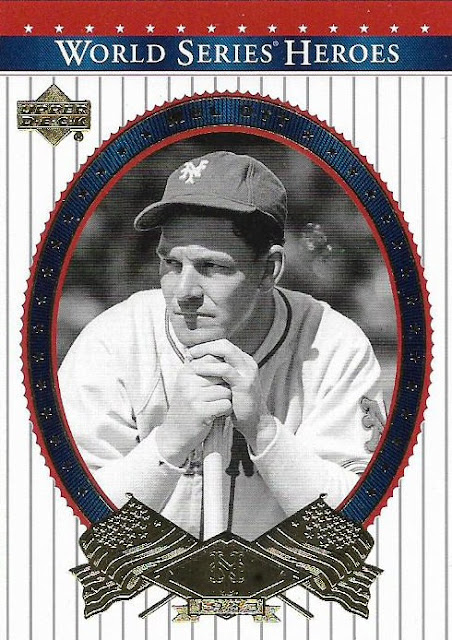 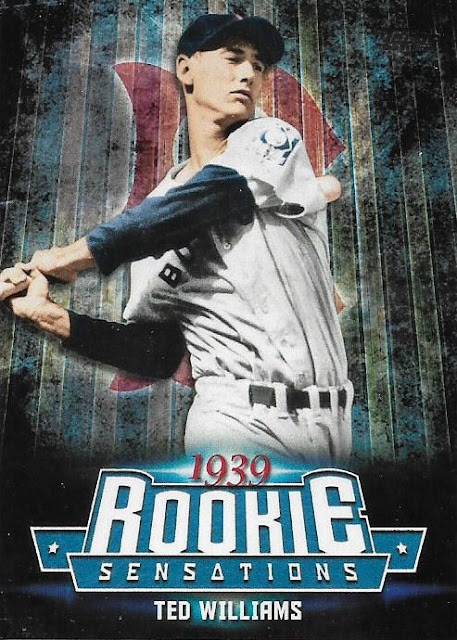 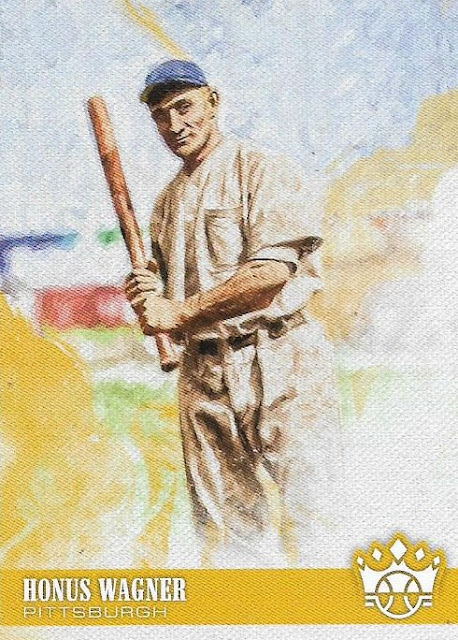 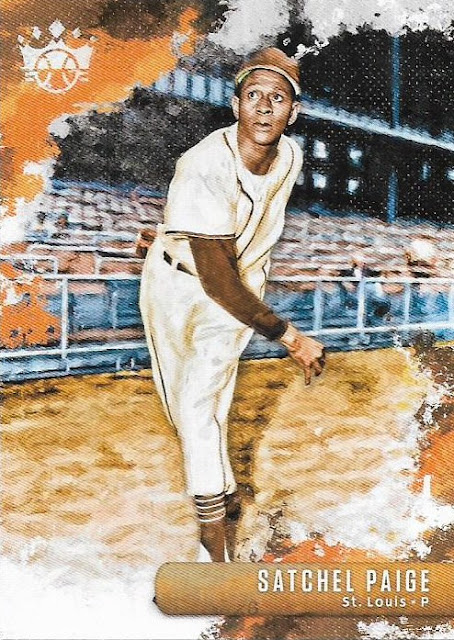 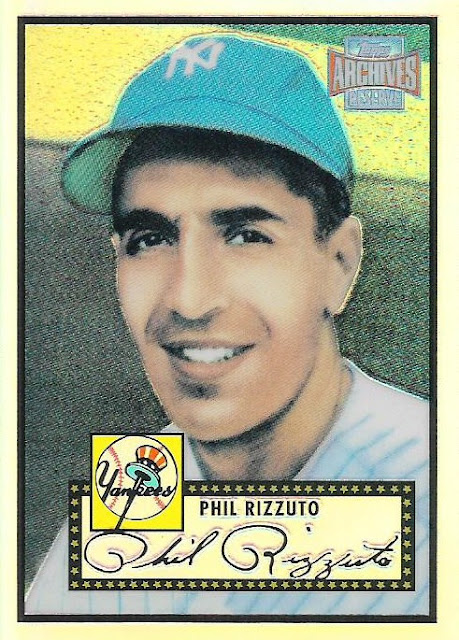 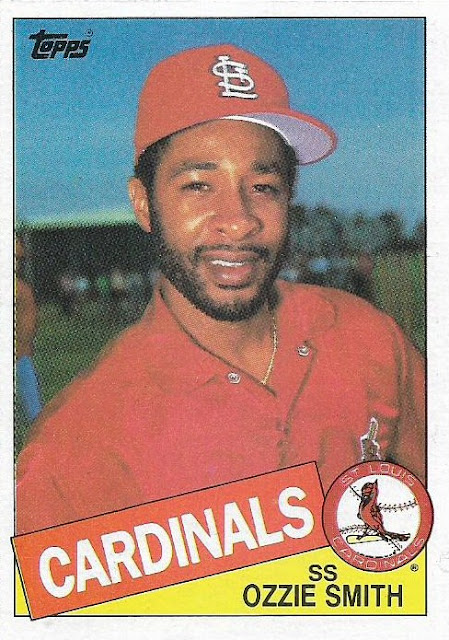 The above six are from Johnny's Trading Spot's Big Fun Friday series.

I've won three or four of these now. This recent one was the least successful for me. My initial pick produced some '70s vintage, but since I own most of the '70s vintage out there already, I grabbed the above cards instead.

Five of the six are new to the collection (Sorry, Ozzie, let's see what you can do as an upgrade). A few too many Yankees and Giants for my taste, but I can't complain about a Mel Ott and Phil Rizzuto. Especially not when a Ted Williams and Satchel Paige accompany them. 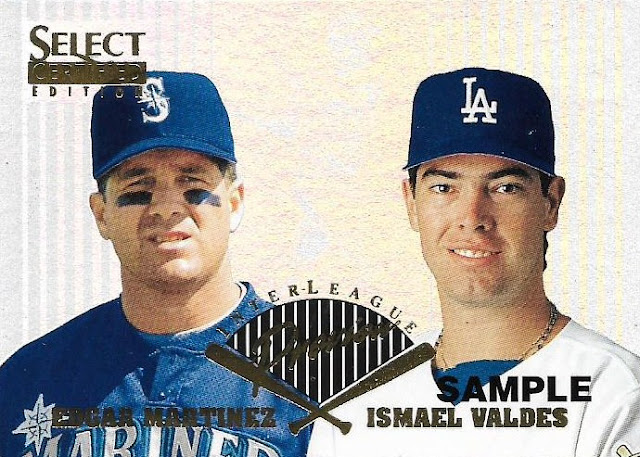 The other giveaway card came from one of The Diamond King's many Diamond Nine giveaways.

It's a card I had never seen before so I knew right away that I needed it. Weird sample card of a weird interleague game for an overall weird Dodger card with a Mariner on it? Yup, that's a new one.

I casually made mention in the Diamond Nine comments that one of the other cards up for the taking was one my dog happened to chew way back when he was a puppy. 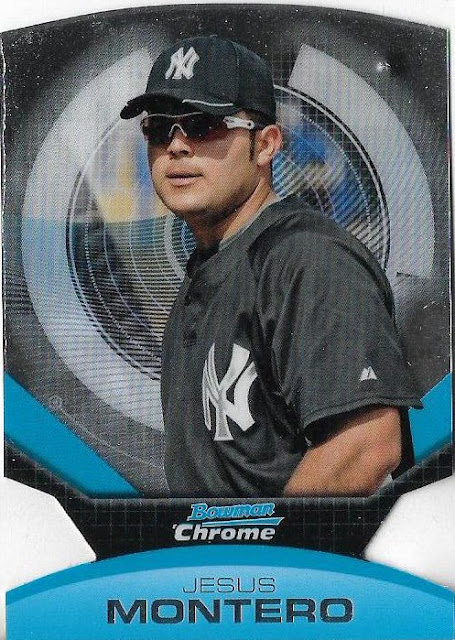 This is the chewed card. It doesn't look too bad here, just a tooth puncture in the top right and some scuffing on the left side. But at the time, Montero was a hot prospect and how am I going to pawn this off on a Yankee fan now?

As time went on, Montero was traded to Seattle, then became a bust, then was forgotten completely. The fancy, chewed-on card sat in my neglected box of Bowman cards completely unwanted.

I never mentioned any of this to the Diamond King but he must've felt sorry for me anyway because that Montero card arrived with the Martinez-Valdes card. 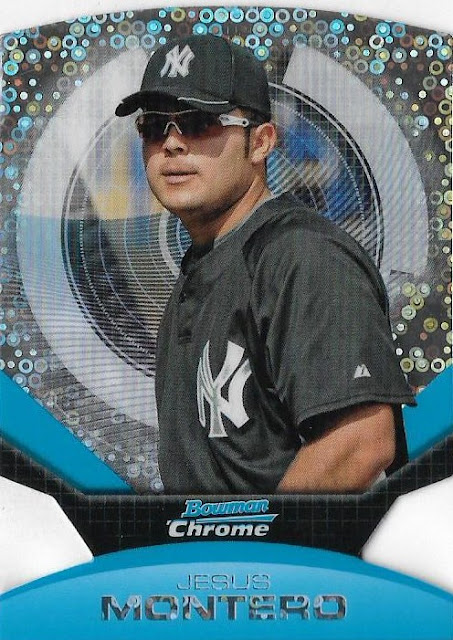 As you can see it's some sort of bubble refractor parallel, which I didn't know when I saw the giveaway card originally.

hey, doggie, are you hungry?

Elliptical Man said…
When I think of business cards, I always think of American Psycho. Yours is a lot more wholesome.
July 26, 2020 at 8:06 PM

Alex Markle said…
Love the business cards. I've been contemplating creating some of my own or maybe some stationary so I'm not scribbling notes on scraps of paper either.
July 26, 2020 at 8:17 PM

Nachos Grande said…
Great looking business cards! I know I don't have the talent to create ANYTHING artistic so kudos to your daughter.
July 26, 2020 at 10:17 PM

Fuji said…
Your business card is awesome! Your daughter did a great job on the logo. It'll be a hot commodity among bloggers for sure.
July 26, 2020 at 10:57 PM

bbcardz said…
Love the look of the business cards. Now I also may have to think about considering business cards for my blog too.
July 27, 2020 at 3:38 AM

Comatoad said…
Nice looking business cards. I agree with you about the t-shirts, too. I've slowly been trying to open my video production business (McDuff Media). I created business cards, because, yes, they do make you look more professional, plus I had a few polo shirts my wife and I wear when shooting, to give us a more professional look. Believe me, it all definitely helps.
July 27, 2020 at 3:44 PM

Jafronius said…
Nice work on the business cards! When Johnny said I did have the option to steal it back I wanted to, but then I thought if Night Owl stole the cards there must be a good reason, like maybe he needed a card from the group. Rather than incur the wrath of the Night Owl, I chose another number...
July 28, 2020 at 9:24 AM