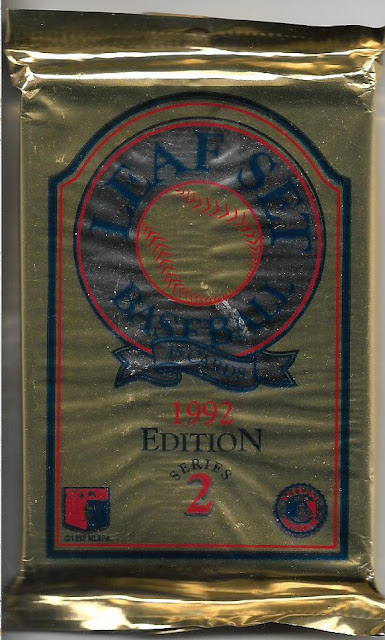 I've been out of town for the last few days, appreciating my first road trip of any kind in five months.

Usually when I go away, I try to scope out some sort of card-opening scenario, a surprise card show perhaps, an antique shop, heck, even a Target run in an unfamiliar place is exciting.

But seeing that the COVID era isn't ending any time soon, dropping in at any store or shop for card frivolity remains impossible for me, I don't care what you see from those video card-breakers raiding the aisles at Walmart.

I haven't opened a pack of cards since an ill-advised Target run in mid-March. It hasn't been as difficult as I expected, but if you throw a four-month pack drought on top of going on a trip and leaving my cards far behind, that's when the withdrawal symptoms start to kick in and nobody wants to see night owl cranky and shaking while on vacation.

I've been holding on to this pack ever since reader Jonathan sent it to me months and months ago. I haven't had the desire to open it because, come on, it's 92 Leaf. Who hasn't seen those cards falling out of a repack box? But before I headed out the door, I threw it in my suitcase because I knew what was ahead of me.

I did open it while sitting on my hotel bed between visits. (I know some are cowering at the thought of traveling and hotel-living at this time. But there was plenty of sanitizing and mask-wearing going on. And NYers, for the most part, are taking this much more seriously than other spots in the country). Opening that pack felt good, too. It was actually interesting to me.

So I'm going to show it here now, since I just got back and it's not like anything else is prepared.

There's no need to prep you for this pack. Everyone should know what this set is all about by now. 1992 Leaf has even been showcased three times on A Pack To Be Named Later, way more than it should be. 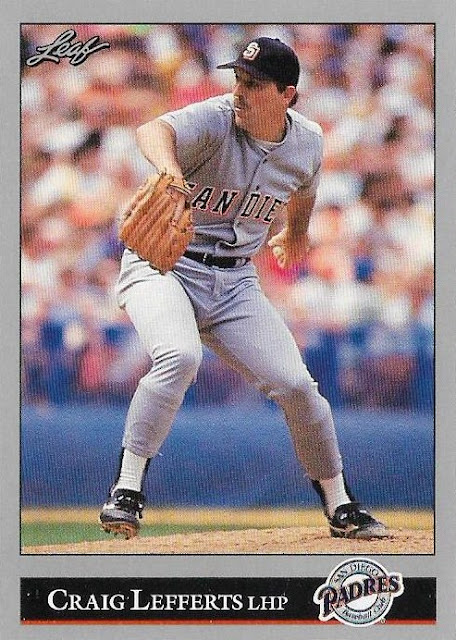 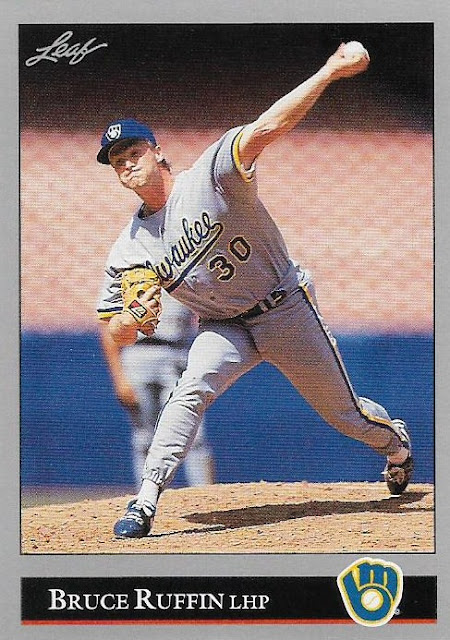 Are you sorry you stayed with this post? I don't blame you. But it'll get better. A little. 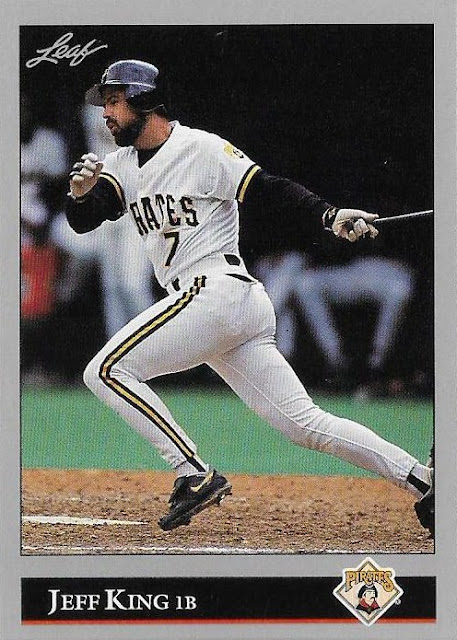 I've interviewed him. So excitement for me anyway. 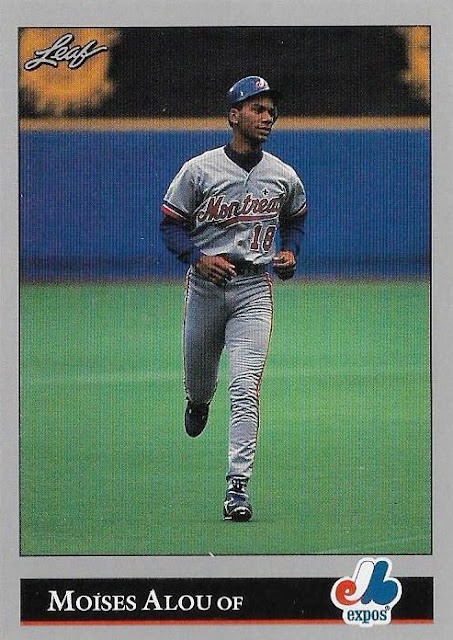 The best part of this pack, by the way, is the Expos content. It was quite the Expos-heavy pack. 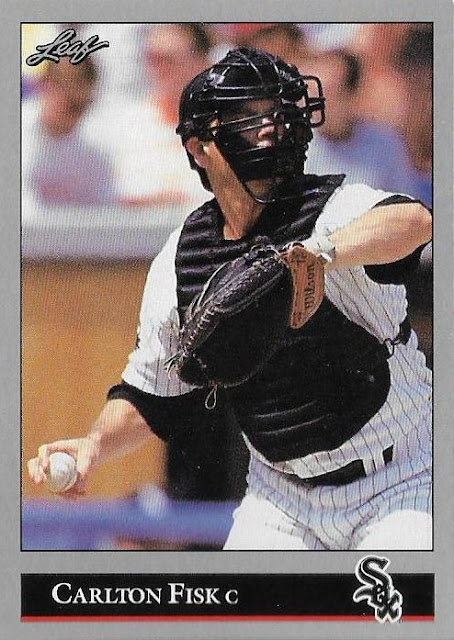 Not nearly as interesting as a Red Sox Carlton Fisk card. 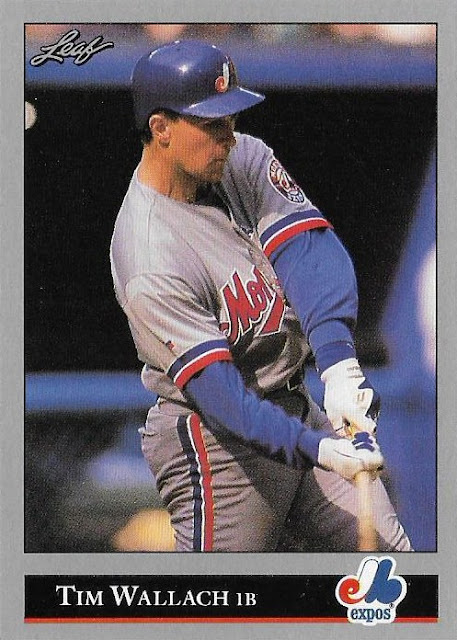 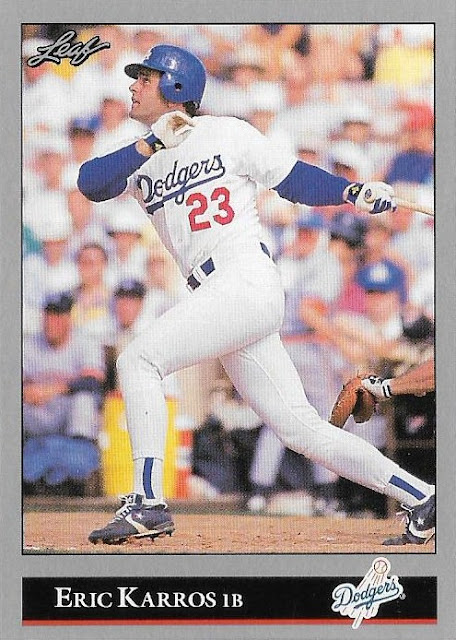 A good pull in '92. Karros was the Rookie of the Year. 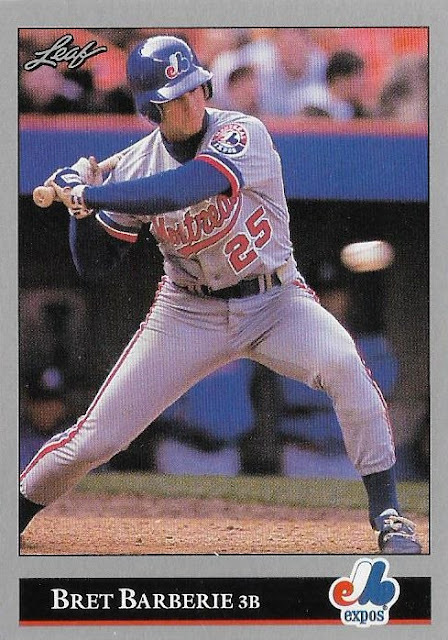 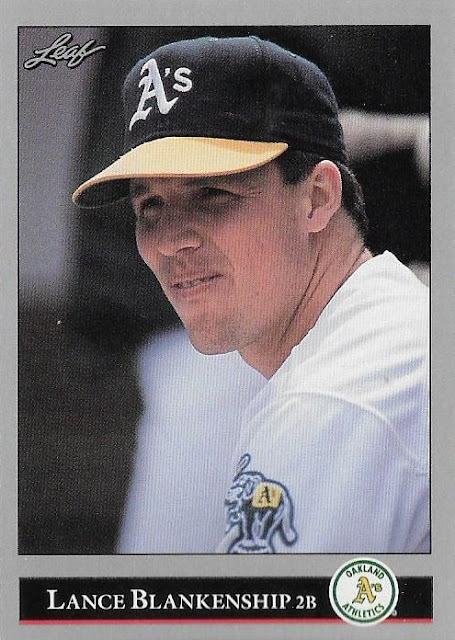 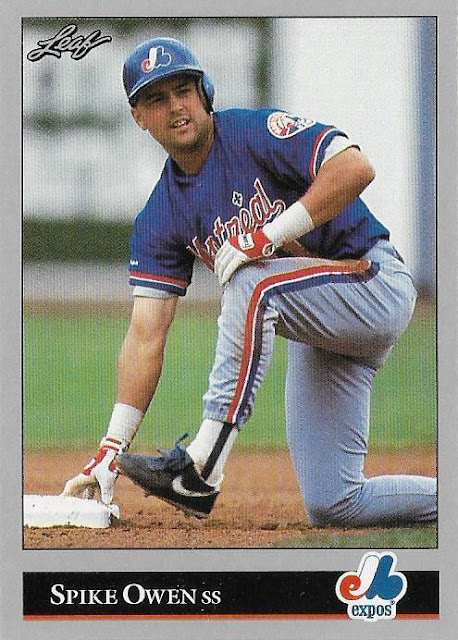 Expo #4 and the star of a game I covered. 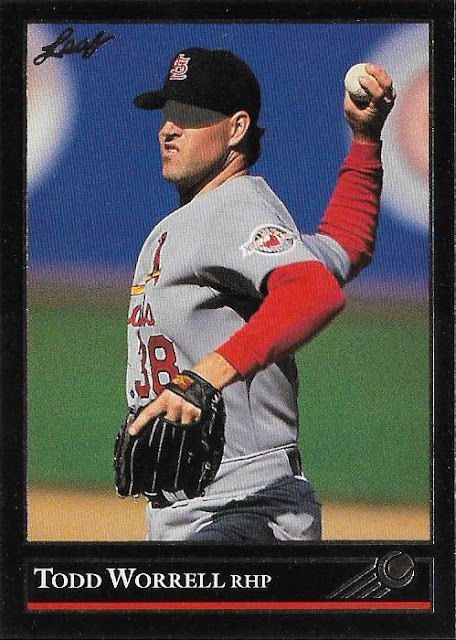 The promised one-per pack Leaf Gold Edition card. I never understood why these were called "Leaf Gold Edition" when the obvious selling point of these parallels are the black borders. 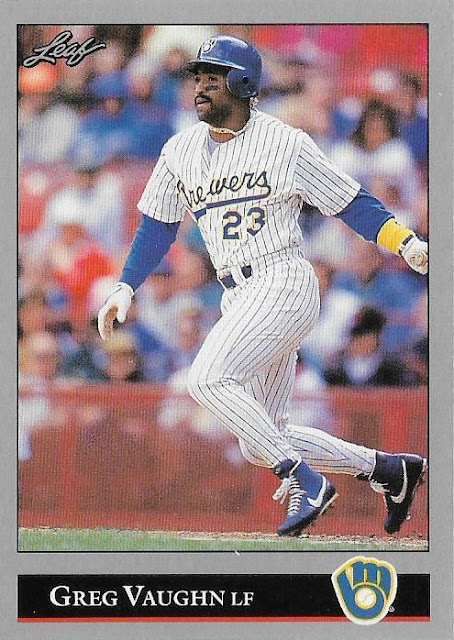 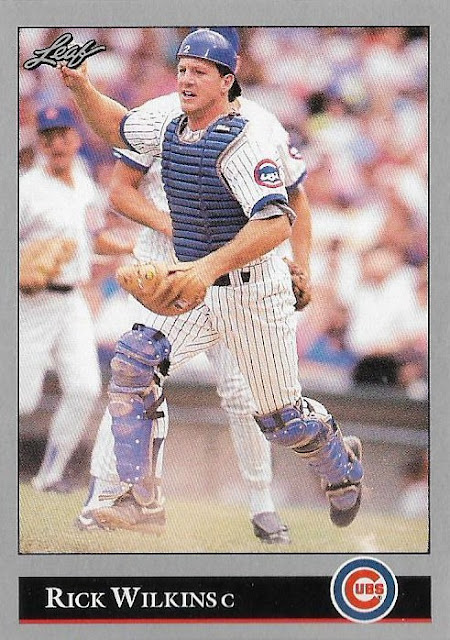 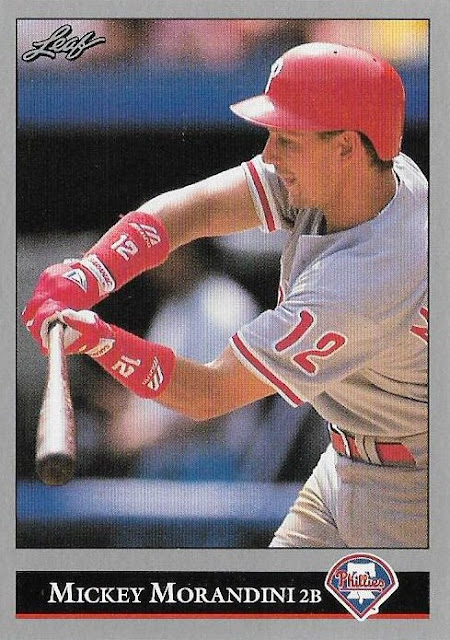 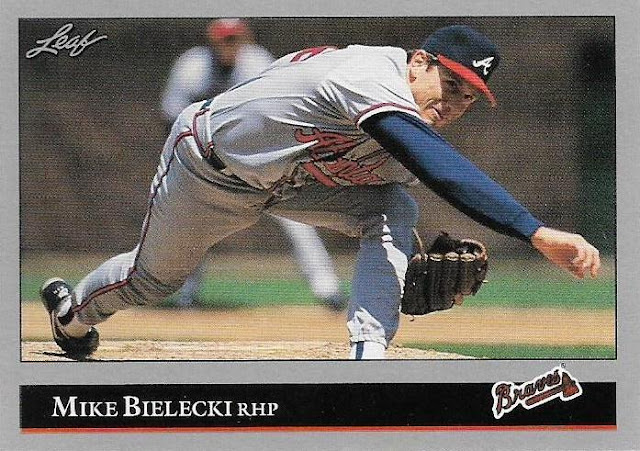 The only horizontal card in the pack. 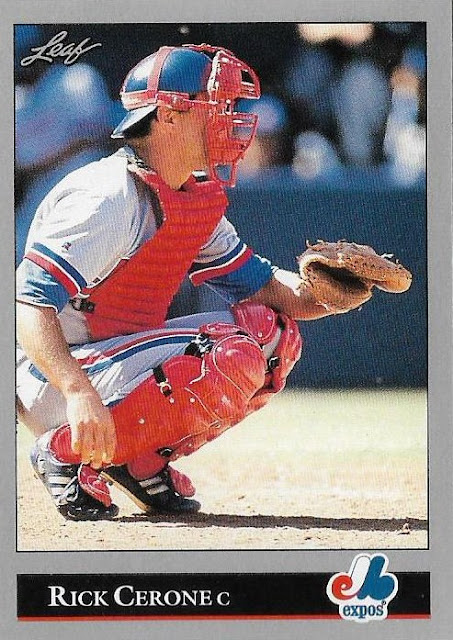 Expo #5! The nostalgia factor is off the charts!

This is the highlight of the pack for me. Until I pulled this card, I didn't know that Rick Cerone played for the Expos. 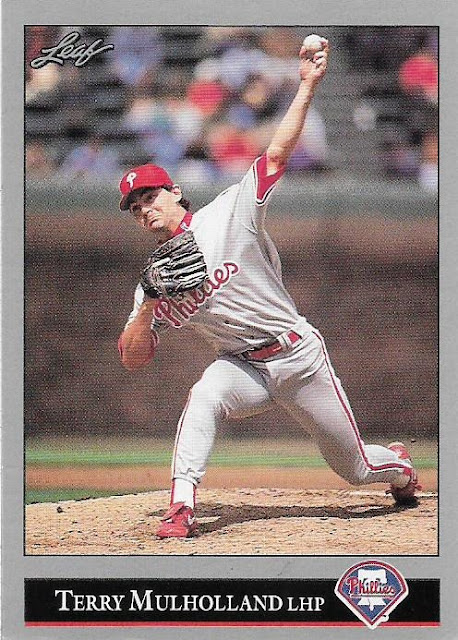 
OK, that's the end of the pack. If you've been paying attention, you have realized that this pack contained 18 cards even though the front of the pack says "15 cards". I don't know how that happened.

Almost as startling as three extra cards is that there were no duplicates within the pack, which given '92 Leaf's collation is somewhat amazing.

I will never say I can appreciate early '90s Leaf on any level. I wasn't aware of Leaf when it emerged as the first premium set in 1990. And I never saw it when it quickly became irrelevant in 1991 and 1992.

But it got me through a desperate time the other day and that's the best '92 Leaf will ever do.

Laurens said…
No one wants to hear it but I've opened a total of 3 packs this year - one pack of 2020 Topps Big League and two 2020 Topps Series 2 hanger boxes - it shouldn't bother me but I feel left out.

Commishbob said…
I'm not ashamed to admit I like the design of that Leaf set. I'm fine with plain. The Venn diagram of my collecting and Leafs time on the shelves shows only a sliver of overlap. I was going when it was coming.

Mike Matson said…
Nice pack! That would be one I'd be really happy to have..

Cerone is an interesting one..
He played for both Canadian teams and both New York teams over his career.
He also played for both native themed teams..
The early 90s were a weird time for Expos catchers..
1991 and 1992 you had four catchers each year..
Three of those catchers over those two years finished their careers. Hassey in 91, and Cerone and Carter in 92.
July 15, 2020 at 7:42 PM

Jamie Meyers said…
When I saw that Rick Cerone I actually said under my breath that I didn't realize he'd played for the Expos. Then I read your comment immediately after.
July 15, 2020 at 7:47 PM

night owl said…
I was wondering the same thing. Very weird shading under his cap. Don't know if they tried to lighten it or what.
July 15, 2020 at 8:48 PM

Johnnys Trading Spot said…
I never noticed before, that Worrell lost his eyes on that card. What happened to them?
July 15, 2020 at 9:20 PM

Brett Alan said…
Props to you for not going into Target and such. I'm thinking maybe I'll order a blaster online at some point, but I'm not going to risk my health and others' health to go card shopping.

Card bubbles said…
I have not opening anything new yet this year. It had been partly planned, but Covid has kept me in line.

bryan was here said…
Ahhh, '92 Leaf. The nadir of the junk-wax era. I remember my sister was working at a Rite Aid at the time these dropped and she bought me a box of them. They were actually nice cards, especially the black gold variations. Seeing these brought back memories of the summer of '92 when I was about to start my last year of college. I can almost hear Boyz II Men on my stereo just reading this!

Fuji said…
Kudos to New York for taking things seriously. Very impressed that you guys have been able to drop those numbers. Hopefully California and Florida will follow in your footsteps. I feel like most people in my area are very good about wearing masks and social distancing... especially in stores. I try to limit my visits to Target to one per month and I do walk by the card aisle when I do, but outside of a pair of Series 2 boxes I noticed a few days ago, it's been pretty bare.

I also hit up my LCS last week. Normally I don't even go to card shops anymore (even before the lockdown), but it was about 50 yards away from an Arby's that my friend wanted me to grab her. I was very, very impressed by the store's policy. They limit the amount of customers that can enter the store at any given time and make you wear a mask. They also make you read a set of rules and verbally agree to them before being allowed to enter.
July 16, 2020 at 9:22 AM

Adam said…
I've always liked 1992 Leaf and thought it was a pretty nice design. Also, Rick Cerone on the Expos? Like you, zero clue he was ever on the Expos.

And good on New York for taking all this seriously. I wish Ohio would too (our governor is great, it's the idiots in the area I live in I'm more concerned about) and wear masks. I made a quick run to the IGA around the corner from me and I was the only customer of the dozen or so in there wearing a mask (despite there being a mandatory mask order in my county) and 3 of the 7 employees were wearing them as well, none of the cashiers. To say I couldn't get out of there fast enough was an understatement.
July 16, 2020 at 6:32 PM

Doc Samson said…
Ironically, I just purchased a complete set of the 1992 Gold Leaf parallel set with the black borders. Just a beautiful set that uses black very well unlike, uh hem, 2007 Topps. I believe Leaf avoided using the word "black" because there was a Topps black gold set or something like that. Not sure.

One more thing: showing my age, I remember when 1990 Leaf came out. At that time, it was considered the first true premium set, beating out Ultra and Stadium Club by one year. And of course, 1990 Leaf featured the Sosa and Thomas rookie cards. Fantastic post, Mr. Owl.
July 17, 2020 at 7:33 PM