'56 of the Month: George Zuverink 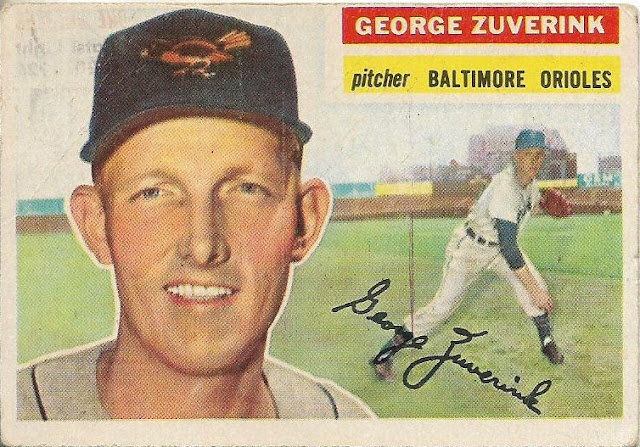 If you are tempted to skip this post because it's a single-card post, or it's a player you don't know, or it's "just some old card," perhaps this bit of trivia will keep you here:

In terms of every player to play in major league baseball, listed alphabetically, George Zuverink is the third-to-last name on that list. According to baseball-reference, you would have to read 19,687 names before finally arriving at:

Until Tony Zych came along in 2015 (Zych pitched in 70 games for the Mariners, you can find him mostly in prospect sets and Team USA sets), Zuverink was the penultimate name on the MLB list with only Dutch Zwilling, who played from 1910-16, holding down the rear.

Let's delve a little more into the Z's of Major League Baseball since you have told me by reading to this point that you are fascinated by this topic. So am I! Let's go!

Just 96 players with a last name beginning with the letter "Z" have played in the majors. The most notable of that group are Don Zimmer, Barry Zito, Carlos Zambrano, Todd Zeile, Ryan Zimmerman, Richie Zisk, Ben Zobrist and Geoff Zahn.

I was curious about whether the 1956 Topps set contained the most "Z" players since there are four of them and that seemed like a lot to me. Those players are Zuverink, Zimmer, Norm Zauchin and Gus Zernial.

I totaled up all of the "Z" players for the modern-card era, which I'm starting at 1952. I kept the list though to players who appeared in the majors for more than one year, thereby having a better chance of showing up on a baseball card.

That list told me that we are indeed in the heyday of "Z" ballplayers and have been since the turn of the century, particularly since 2007. From 2007 to 2018 there have been at least 8 players in the majors with a last name beginning with "Z" each year. In 2019, that total dropped to six.

In the first dry period, Z-players Chris Zachary and Jerry Zimmerman represented the Z's for a good portion of the '60s. When Zimmerman departed, Bob Zepp took his place.

During the late '80s, Paul Zuvella usually ranked as the only Z-player. Finally, Todd Zeile appeared in 1989 to help build to the glorious Z period that we know now.

OK, some of you must wonder why I'm going on and on about the Zs.

No reason really, I've just always been interested in it. When I was collecting cards, the 1978 Topps set was amazing for a lot of reasons, but one of the best was that it was the solo-card debut of two Z players, Joe Zdeb and George Zeber.

Who were these guys? They were unfamiliar with exotic last names. Neither lasted very long in the majors but that made them all the more interesting.

Also, as I mention recently, Jim Zorn was making a name for himself in the NFL at the same time. And there was that favorite from my first year of card collecting, Richie Zisk, to this day the only former major league player to call me on my cell phone.

That's all the reason I need to follow the Z's. 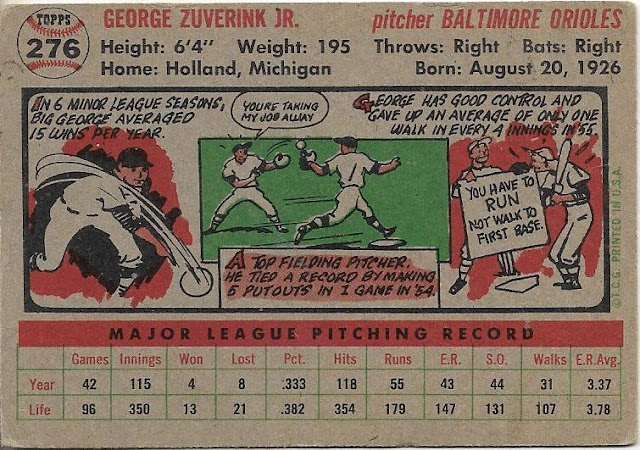 OK, now back to poor George Zuverink, who I've neglected.

Zuverink was discovered when he was serving in World War II, playing in the Philippines. He was stationed in Australia during the war and spent most of his time during the war driving fuel trucks. He was signed by the Cardinals, then picked up by the Indians. He won 20 games in the minor leagues in 1950.

His best MLB years were with the Orioles in the mid-1950s. He worked as a relief pitcher and he led the league in appearances in 1956 and 1957.

And, yeah, he is part of another Z trivia question.

He formed the first all-Z-name battery by pitching to Frank Zupo during a game against the Yankees in 1957.

Thanks for indulging me in some "Z" research. My "Z" questions are sufficiently answered. Even if I never mentioned Eddie Zosky or Julio Zuleta or Oscar Zamora.

And for those who couldn't be more bored by what I just wrote, please know that this post is mostly a set-up for my next '56 of the Month post, which you'll see next month.

That's all the hint you'll get.

Wrigley Wax said…
I did a CubZ post a couple of years ago... the Cubs have had more Z players - 15 - than any other team. The next closest was 9.
Three of the players on your 2017 list were Cubs

Fuji said…
This post has to hold the record for most Z's in a single card blog post. Made me think the first person on the list would be alphabetically. Had Aase in my head. Totally missed the two Aarons and David Aardsma.
July 13, 2020 at 12:03 AM

bryan was here said…
Perhaps for a follow up, you should do Z's in other sports. Maybe Zarley Zalapski and Zane Zenner!
July 13, 2020 at 2:08 AM

Tom Robak said…
Tempted to skip? No way, it’s a 1956, impossible to skip. Plus I remember him from other sets, also pleased to have him included in my autograph collection. Thanks for posting a ‘56 and the interesting Z information.
July 13, 2020 at 9:10 AM