The best Dodger cards ever made countdown: 90-81 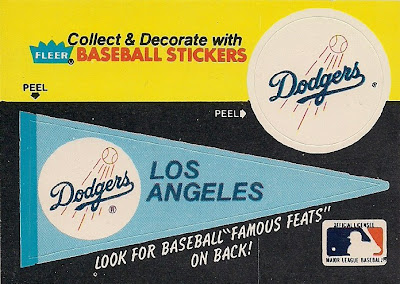 I am already grateful for these countdown posts. It's a very busy time of year, and also a very poor time of year. So I can't rely on cash or time-consuming research to produce posts. But countdown shows? Well, that's just cheap and easy entertainment!

What else can you get that's so cheap and easy?

Tonight, I have for you cards number 90 through 81 of the best Dodger cards in my collection. As always, please remember, the best cards are only cards that I have. So if you're wondering why the 1952 Topps Andy Pafko card isn't in this countdown, that's why. Either live with it, or pony up and send me the Pafko card.

I hope the popcorn's ready, because I'm going to begin. 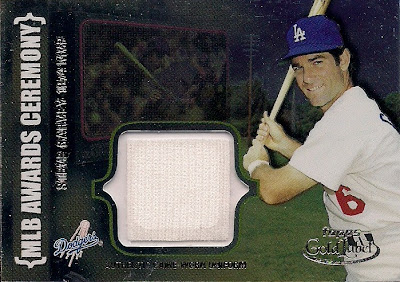 I've said that I'm not going to include "hit" cards, like relics, unless they're special in some sort of way. I consider this one "special." It's one of my favorite cards of all-time. Not only is it a jersey card of a player from my childhood, but it is designed fantastically.

There's a decent-sized photo of the player (the downfall of many a relic card). There is a reproduction of his 1974 Topps card, as this card is recognizing his '74 MVP award. And the jersey swatch can be viewed both from the front ... 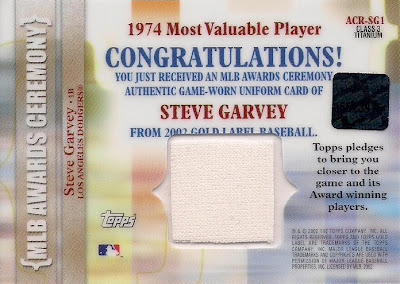 Plus the card is very shiny, which means nothing to my scanner, but everything to me.

This is how you produce a relic card. 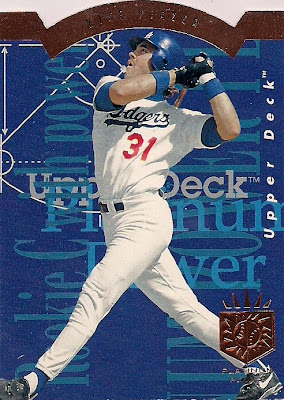 I'm going to get myself in trouble guess-timating on years and beginnings here. But I believe Upper Deck SP debuted in 1993. I also think that this might be the beginnings of diecut cards, but I'm not sure. At any rate, it is very early in the diecut game and very early in Mike Piazza's career, as '93 was the year he won Rookie of the Year honors.

That all adds up to what had to be a desirable, milestone card at the time. Good enough for the countdown show. 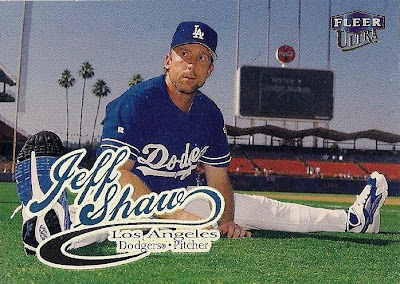 There are plenty of cards featuring Dodger Stadium in the background. But this -- a ground floor view -- is a whole new perspective and captures the beauty of Dodger Stadium in a way that you can only observe if you're standing on the field. And thanks to the terrific scenery and the placement of Shaw's name, we don't have to concern ourselves with the fact that this is a crotch shot. 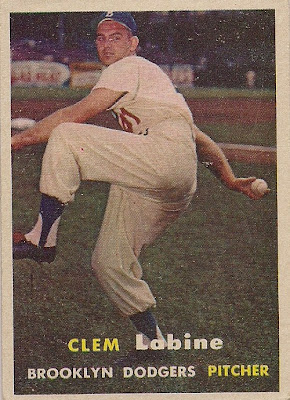 Labine had some fantastic wind-up. I've seen it on several cards and in several different photos. This is perhaps my favorite photo of the entire 1957 set. The set can be kind of drab, but not with a cool, old-school photo like this. 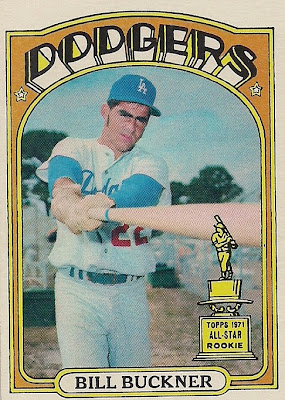 Billy Buck's very first solo card is a great one. The "mid-swing" pose is perhaps the greatest of 1970s poses, and the rookie trophy beats the snot out of the rookie cup all day. Plus the placement makes it look like Buckner's really trying to knock the little man off the trophy. Add the fact that Buckner doesn't look close to how he would look for just about his entire career, and there is just too much awesome in one card. You may consider Buckner a Cub or a Red Sox, but the Dodgers have THIS card, my friend. 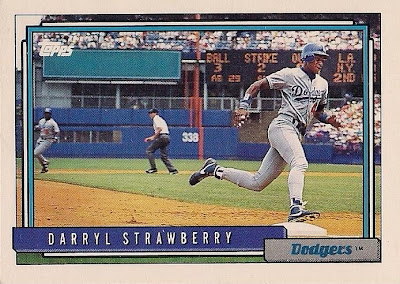 The early Dodger cards of Strawberry are nothing great. Glorified head shots, Strawberry at a press conference, etc. I skipped all those cards -- even if they came out earlier than 1992 -- for this one. I consider this Strawberry's REAL first Dodger card. The photo is action-packed and exciting, even if it does depict a Dodger loss. (Yet, about all I think about with this card, is that blank, green screen staring at me). 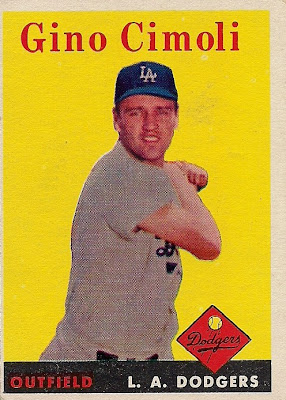 The scrapbook nature of the '58 set never appealed to me, and this card has a true sloppy scrapbook feel as someone apparently cut off the bat when they were cutting out Cimoli's picture to glue on this card! Now, thanks to that flub, we can speculate as to what Cimoli might really have been carting over his shoulder. A garment bag? A sack full of cats? The possibilities are endless. Perhaps most shockingly, Cimoli isn't the only example of a player toting a phantom bat in the '58 set. 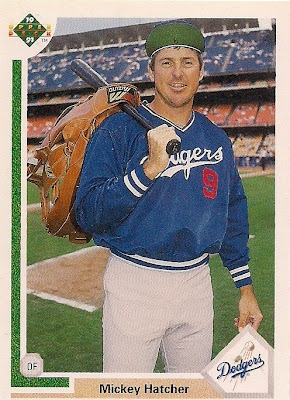 This card was created at the prompting of a Dodger-hating Giants fan working for Upper Deck. But the joke was on him, as this became a classic card for Dodger collectors. Not only is Hatcher carting his monstrous glove that he made famous on his 1986 Fleer card, but he's got a whole Gomer Pyle thing going with his cap. 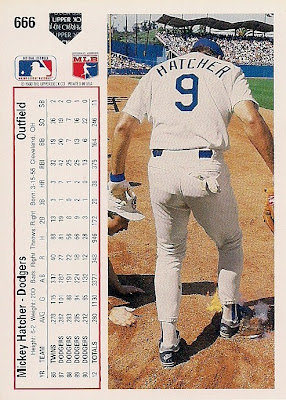 Turn the card over to the 666 number that Upper Deck hater gave the Dodgers for a stretch and there's Hatcher stomping a fire near the dugout. Classic! That's a lot of effort Upper Deck went through for a card of a player on a team it supposedly hated. Me thinks Upper Deck really loooooooooooooved the Dodgers. 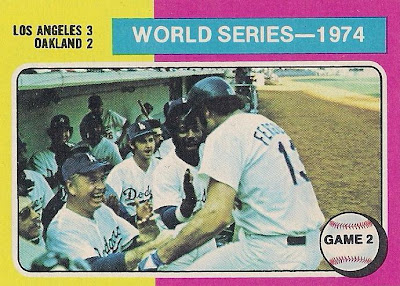 This card is one of my favorites from the first year that I collected cards, a joyous scene of my favorite team in the World Series. So many identifiable characters of that 1974 team are in this photo. But beyond my personal connection, it is also the sign of new beginnings for the Dodgers. After eight years of rebuilding, they finally made it back to the postseason, and they would continue to be a postseason force for another 10 years. 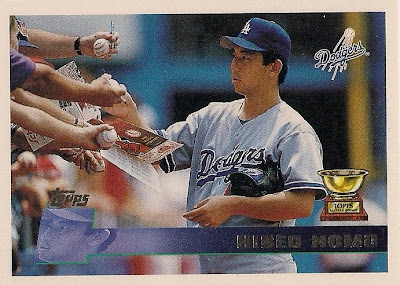 Granted, this isn't any one of the many rookie cards that Nomo had in 1995. But it IS Nomo's first Topps flagship set card and it's a great one. The rookie cup is great, but the photo is what makes the card. It captures Nomomania from the previous year perfectly. The "autograph hounds with arms outstretched" is a classic photo bordering on cliche. But it really works here.

And there you go, the second group of 10 from the list. Quite a bit of variety there, I think.

And I barely had to do anything on a very busy day.

Stealing Home said…
you've again added a couple of my favorites as well.
the straw rounding third and hatcher's hot foot are already in my collection.
i'm seriously jonesing for that Ferguson-Alston WS card.
October 9, 2012 at 7:59 PM

Nick said…
Great picks! I can't wait to see what tops these.

The '72 Buckner is one of my personal favorite Dodger cards as well. I've got that '91 UD Hatcher around here somewhere, I never noticed that awesome shot on the back!
October 9, 2012 at 8:11 PM

P-town Tom said…
I love cheap and easy blog posts. They really are the most entertaining kind.

I have that Hatcher card, too. But I must have never looked at the back. That's pretty cool! By the way, I'm not so sure Hatcher wasn't given the "hotfoot" treatment!
October 9, 2012 at 9:14 PM

runfore!kelloggs baseball cards said…
Wow. Great selection of cards. I didn't really collect any cards for a number of years after the 1994 strike, but I really love your choices.

AdamE said…
90. A swatch that is viewed from the front and the back has to be a pack searchers dream.

88. I'm glad you took my advice on no more crotch shots.

87. Seriously, how old school of a name is Clem? If I met someone tomorrow and they said their name was Clem and they were under 80 I would have to suppress a laugh.

86. When Bill goes to the mall those people that do eyebrows in those kiosks must stalk him until he leaves.

84. I never noticed how bad the 58 design is until this card. It really does look like some kid cut out a picture and put it on there. I wonder how many kids back in the 50s actually did this?

83. I don't remember Hatcher as a player. Did he cart around that big glove because he couldn't catch? Quirky cards are not for me.

81. It is great that Nomo is signing for fans but what is that look on his face? At first glance he looks scared. Second glance makes me think he is a little pissed. Third look and he is just out there in a daze, like he had breakfast with Dock Ells before the game.
Wow, 250 word comment and I did my own post today. Well, sort of.