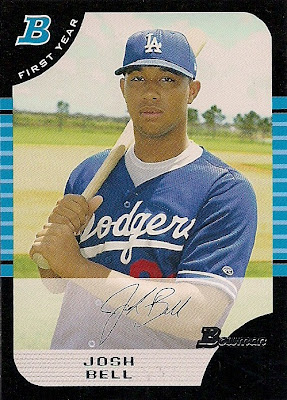 OK, I know how you feel.

You're bummed about how the baseball season ended. That horrible team with the awful taste in clothing attire won the World Series again. It was one of the dullest Series since you started watching baseball, and you know the TV ratings are going to be at historic lows.

You went through a lot for seven months to have it turn out like this.

I don't have a lot of energy to put into this because I went through my own personal hell of declaring for everyone in the north country readership that some team that nobody cares about won a World Series (yes, there are still people around here that actually read type printed on paper. Are we backward or what?)

But I thought it would be imperative -- the least I could do really -- to show some Dodger cards in light of what just transpired.

If only as a reminder as to who will win the World Series at this time next year.

That's right, folks. Marco Scutaro is about to turn into a pumpkin in five, four, three, two, one ...

And, presto! The Dodgers -- or anybody really (Please, somebody ELSE) -- will be there to make things right.

So here are some Dodgers from another person who I'll bet doesn't like this year's World Series winner any more than I do. He's the operator of Home Of The Toddfather, which means he's a Rockies fan -- the team who let Scutaro go.

Yikes, I wouldn't want that on my head. 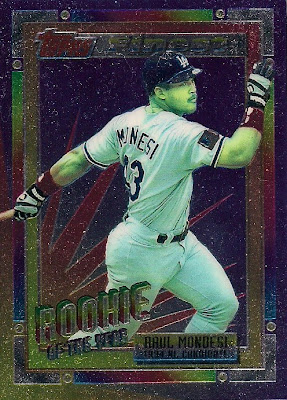 A terrific 1994 Finest Rookie card of Raul Mondesi. This looks so much better than this dull, dusty thing that showed up here. 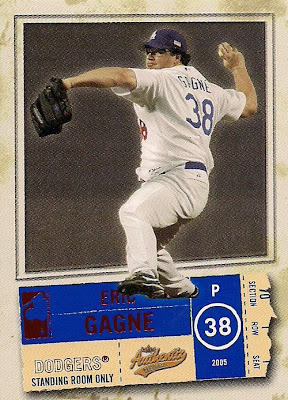 This is a parallel type card. Something called "Standing Room Only" from Fleer Authentix with a red foil thing going. I know that's a lot of vagueness, but if you want information, go to baseballcardpedia.com 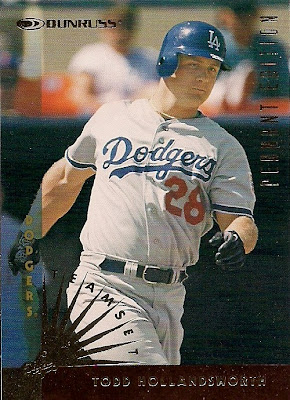 More shiny parallelness -- although you can't tell it here. This is the "Pennant Edition" of a 1997 Donruss card. And I'm happy once again that I wasn't collecting in 1997. 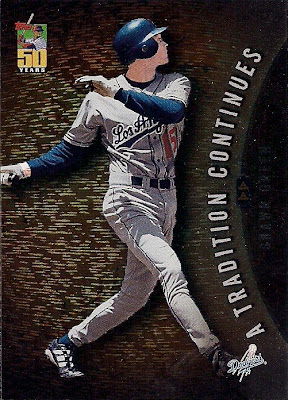 Shawn Green once refused to play against the Dodgers' hated rivals. No, it had nothing to do with their putridness. It was because it was Yom Kippur and Green is Jewish.

But I tell myself it was because of the putridness. 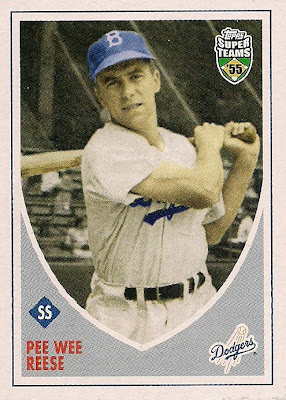 In Pee Wee Reese's rookie season in 1940, he hit a grand slam in the bottom of the ninth inning to beat the precursors to the current orange uglies. Reese wasn't the captain for nothing.

So there you go. A few Dodgers to get your mind off of the end of baseball season. And the start of winter. And counting the weeks and weeks until spring training camps open.

But at least there's one good thing about all of this.

The Giants officially go back to being the football team from New York.

I can handle that a lot better than that other team.

Stealing Home said…
haha thanks for giving us some Dodger goodness.

on the bright side, everyone has been spared whatever wacky topic i was gonna have to dream up for my Game 5 WS Heroes installment.