The official, unofficial, you're never REALLY going to know, tally 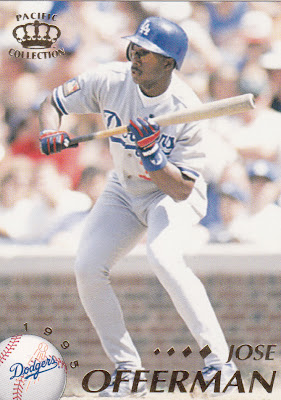 I've been doing this blog for a couple of years, and one thing I have noticed is that some collectors have the organizational aspect of the hobby down cold.

I'm not one of those collectors. But I've been envious of the ones who know exactly how many cards that they have. I've never known that. I just have never gotten around to counting them all up.

Wrigley Wax, every once in awhile, announces how many Cubs he has in his collection. That always caused me to wonder how many Dodgers I have in my collection. I've been wondering now for more than two years. But not anymore.

Today, in the middle of about 400 other things going on because it's still blasted MARCH, I did a quick inventory of all my Dodger cards. Yes, I'm insane. But in that state of insanity, I was lucid enough to keep the count to just my cards. Stickers were out. Glossy 5x7 photos were out. Postcards were out. All I tallied were those items that meet the traditional definition of a card (cards with relics were OK). I also did not include any Dodger doubles, because, you know, I have standards.

When I was finished, I came up with a grand total. Here it is:

Now, I'll tell you right off, that number is incorrect. I'm pretty certain I screwed up somewhere. Several times. First, all my Dodger cards are not in a spreadsheet on a computer. Some are, some aren't. So, when you're tallying in two different formats, errors are going to arise. Also, there are all kinds of entry errors that occur when dealing with databases. Or at least when I am dealing with databases, anyway. And then there are the common variety "did I type that number in the calculator already or didn't I?" errors.

Of course, I continue to add to that total as I write this. For example, there are cards stacked up from just-received packages that haven't been added to the total.

Let's have a look at one now. It's from madding at Cards on Cards, whom I've traded with possibly more than anyone (although that "27 trades" statement from Nachos Grande is making me wonder). 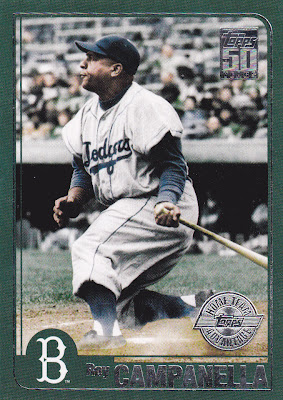 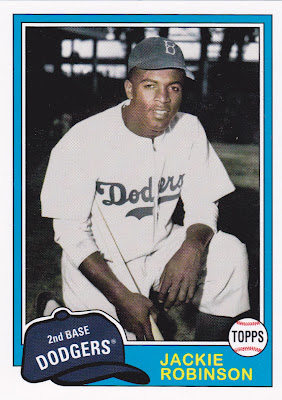 I'll start with a couple of Vintage Legends cards from last year's Topps, featuring two of the guys I just complained about three posts ago.

But I still love these cards. Especially the Jackie Robinson card. Blue is the border Topps should have used for the 1981 Dodger cards, as was demonstrated so well here. Unfortunately, Topps used blue for the Astros and A's instead because that made perfect sense. 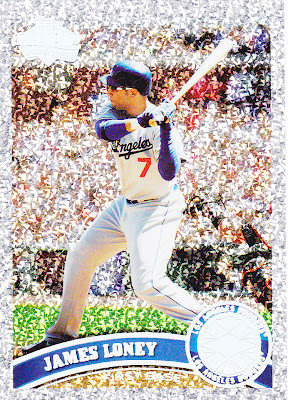 These diamond parallel cards are the reason I keep buying 2011 Topps even though I'm not collecting the set.  So many folks are trying to complete this set, that I can't afford to ignore the cards. That Topps is a shrewd dude.

By the way, I'm getting close to having all the Dodger diamond parallel cards for Series 1. If you have Casey Blake, Russell Martin or Vicente Padilla, you know what to do. 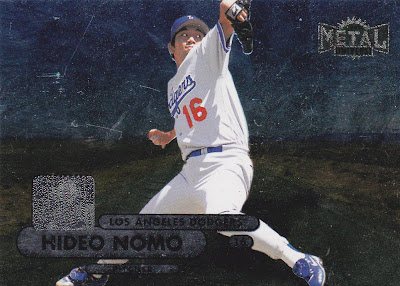 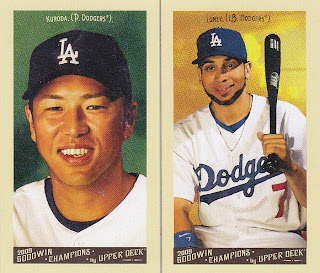 A couple of Goodwin minis. It turns out I have one already (Loney). I have a mini-specific post ready to go, but it's going to have to wait until I'm not as busy. I'll shoot for next month. 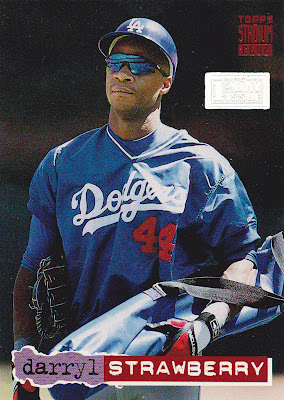 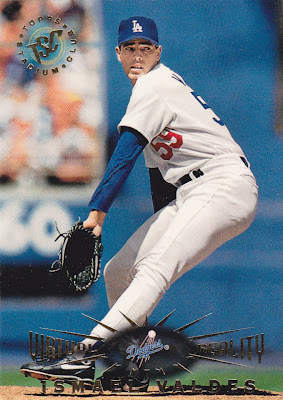 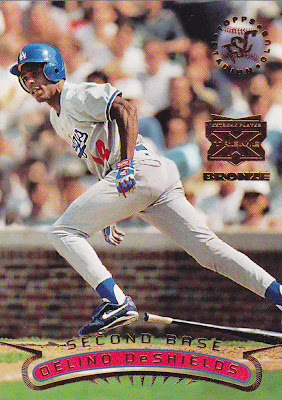 Time for the Pointless '90s Parallels portion of the show!!!!!!! Stadium Club really veered off course during the mid-1990s, didn't they? I suppose they were cool at the time, but I'm glad I wasn't collecting then. 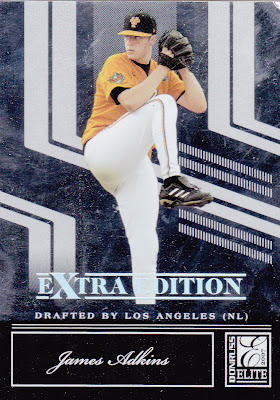 I get alarmed when I see people listed with Los Angeles (NL) wearing orange. Fortunately, the card back is bathed in Tennessee Volunteers creamsicle orange, which is a thousand times better than that squash-colored orange that other team wears. You know the one. The one that won't repeat this year. 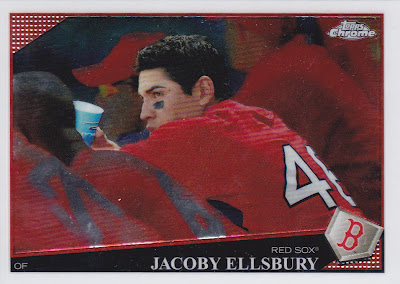 You observant folks will notice that this is not a Dodger card. But you can stop looking for your gold star because you should also know I'm still trying to complete the 2009 Topps Chrome set. Fortunately, madding knows this and this is one more off the list. And his gold star will be shipped out in the mail Monday. 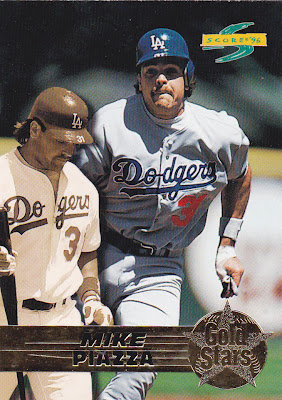 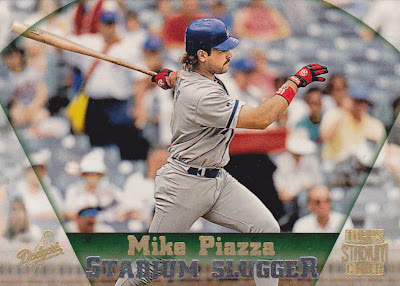 Two more Piazzas. I'm sure someone out there has 10,615 unique Piazza cards. But I don't know if they want anyone to know that. 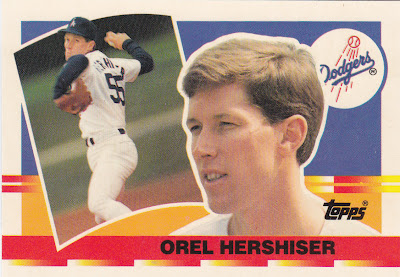 The final card that I am showing is a Topps Big item from 1990. It has a tremendous Ocean Pacific look to it, only exceeded by the best hair-combing job ever documented on cardboard.

So, after those cards from madding, the Dodger card total is now up to 10,629 cards. (There is one card in the package I forgot to scan).

Just not a numbers guy.

Anonymous said…
I'm impressed - first, at 10,000+ unique Dodgers cards, and second, that you made the effort to count them. :-)

I like the Darryl Strawberry 1st Day Production parallel - you don't seem many of them on card blogs.

BASEBALL DAD said…
Thanks! Now I can get some rest ! I've been losing a lot of sleep wondering about your Dodger total.You are right up there with David and I and our Indians.I don't know about Dodgers, but about 3 years ago there was supposedly about 40,000 different Tribe cards ! I need to get some more albums.
March 20, 2011 at 3:57 PM

beardy said…
Impressive number indeed. At least you were able to locate all of your Dodgers cards. I fear that some Orioles card may have mistakenly ventured into the "Closet of Commons", and are therefore destined to a life of misery, potentially surrounded by Yankees cards.
March 20, 2011 at 4:53 PM

Mark Aubrey said…
Finally a Hershiser that you've recently show that I actually have.

madding said…
I honestly don't want to know how many Cardinals cards I own. The thought makes my head hurt. I do have 9 binders and three unsorted stacks on my coffee table.
March 20, 2011 at 5:11 PM

Wrigley Wax said…
Welcome to the world of the organized! You have a very impressive number of Dodgers; you've got my Cubs total topped by 2,000. Looks like the Cubs are in mid-season form, down by a bunch!
March 20, 2011 at 5:30 PM

Chris Stufflestreet said…
If somebody ever came up and demanded to know how many cards you have and demanded it be right...tell them they have to count it. That should solve your issue quickly.

When I was a kid and lived just up the road -- and over there 15 miles is definitely "up the road" -- I used to keep a graph of all my Topps sets, instead of using that paper for my trigonometry assignment that the paper had been bought for me to do. I kept track of total cards, as well as percentage. It looked nifty.

Today, all I do is keep a "to go" number. Each set on my wantlist lists how many cards are left before I finish. At the top, there are numbers of how many total cards I need for the Topps and Bowman runs I'm working on.

Feather Chucker said…
Dang that is a lot of cards. I've thought about doing a database before but that seems like so much effort. I saw a person do a flickr collection that was pretty awesome. I might be down for that. I just can't see spending a whole day taking pictures of all my cards.
March 21, 2011 at 8:45 AM

Yankeejetsfan said…
Organization? What is this? I know not of it as I have Yankees cards in boxes that really need to be put in their binders. If I had to guess, I would say I have over 10,000 diffrent Yankees cards. Maybe one day, I too will join the land of organize.
March 21, 2011 at 3:47 PM