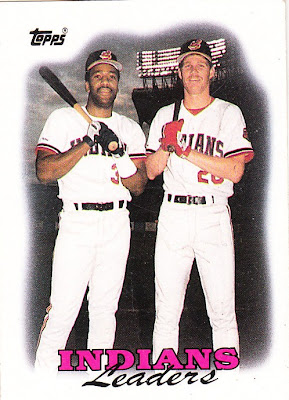 Since Opening Day sits just four days away, I present to you a cautionary night card.

Any Cleveland Indians fan knows that the 1987 season was a disaster. Sports Illustrated famously put Joe Carter and Cory Snyder on the cover prior to the season and proclaimed the Indians the best team in the American League.

The rational for doing this was basically because Cleveland had finally enjoyed a winning season in 1986, going 84-78. It was its first winning season since 1979 (when the Indians went 81-80), and the Indians had never been that far above .500 since 1968. The Indians had also scored a bunch of runs in '86, so, SI figured, someone must be doing something right on that team.

The problem was there was a whole lot of wrong on that team, too. The Indians simply managed to keep it hidden well in 1986. The Indians' top two pitchers in '86 were knuckleballers, Tom Candiotti and Phil Niekro. And Niekro was about 240 at the time. Their No. 3 pitcher was Ken Schrom, and there was next to nothing after that.

Tony Bernazard and Mel Hall weren't the standouts that they seemed to be in '86. And switching to Chris Bando at catcher in '87 to replace Andy Allanson turned out to be a wash.

Instead of finishing first, or even fifth as they did in '86, the '87 Indians finished last.

But that didn't deter Topps. Or Joe Carter and Cory Snyder for that matter.

In the 1988 set, Topps posed Carter and Snyder together under the spotlight. After all, the Indians might have sucked in '87, but Carter hit 32 home runs and Snyder hit 33. They were young, break-out stars. Maybe SI was rushing things a little. But with Carter and Snyder, Cleveland would get things right eventually. Right?

By then, Carter had become a Blue Jay and a national hero, giving Toronto back-to-back World Series titles with his blast against Mitch Williams in the '93 Series.

Snyder toiled with Cleveland until 1991. Then he went to the White Sox, and the Giants, and the Dodgers, where he led the league in strikeouts for L.A. in '93. But at least the Dodgers had a .500 record that year.

The moral to the story?

You can have two young power hitters on your team. You can even lead the league in runs. But if you ain't got pitching and the rest of your offense is Brook Jacoby and a bunch of scrubs, you're not going anywhere. Even if you do have all the pitching, there are no guarantees.

This is why I refuse to proclaim the Phillies 2011 N.L. champs or even 2011 N.L. East champs. Sure, they've got a ton of potential on the mound. But I wouldn't be surprised in the least if the Braves outsmarted Philadelphia thoroughly this season.

(Then again, a certain magazine just placed on the cover two youngsters who play for Atlanta. At least SI didn't say the Braves were the best team in the N.L. Phew!)

Building a team is a lot more difficult than propping up two mashers under a bank of lights and writing THE FUTURE underneath in big bold letters. That is why I will always respect a general manager more than an agent, and why I'll always be a team collector and not a player collector.

As cliche as it is to say, baseball truly is a team game, unlike some other sports. One star isn't going to lead your team to a title. Not even two stars will do it. Looking at my 1988 Topps Orel Hershiser card doesn't mean even a quarter as much to me as looking at my '88 Hershiser card surrounded by my '88 Jeff Hamilton card, Franklin Stubbs card, Mike Scioscia card, Mickey Hatcher card, etc., etc.

Topps and SI should have known:

--David said…
Wow! Bravo! I couldn't have put together a better post summing up the Tribe, especially based on this one card. I have that copy of SI floating around somewhere because my uncle sent it to me as a "good luck charm." So much for that, eh?
March 27, 2011 at 5:21 PM

Matthew Glidden said…
Great article and good point about seeing any significant improvement as "the turnaround year" for moribund teams. (Similar lessons learned by Seattle in 2010 after finishing one eyebrow above water in 2009...)
March 28, 2011 at 8:09 PM