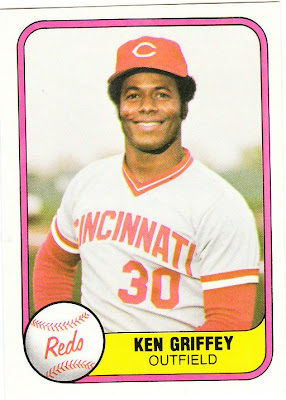 I have decided to create a series out of my visits to the particular dollar store that sells cards from the '80s and '90s. I wasn't going to do this after the last couple of visits, because the aisle seemed to be conquered by football and basketball offerings. But things changed during a trip there the day before Easter.

So, if you want to read about my previous visits, go here and here and here. Meanwhile, I hope to chronicle more dollar-store trips and I'll have them all linked on the sidebar.

And that's because during my latest trip, I found a number of new zip-lock bags had been positioned in front of the non-baseball cards. In most of those bags were cards from 1981. Dang! I had stumbled across cards from the era of instant gratification.

For those of you who remember 1981 and were collecting before '81, you know that was the year that Fleer and Donruss showed up in the same candy aisle as Topps. That may not mean much to those who know nothing but choice after choice of card product, but this was something shocking to young collectors in '81. Wherever we went, every drug store had at least one of the three brands. Some just had Topps. Some had just Topps and Fleer. Some, weirdly, just had Donruss. And some very smart stores had all three.

Well, flash forward to 2010, and my dollar store had '81 Topps and Fleer. Now, I am just a dozen cards away from completing the 1981 Topps set. So I immediately snapped up the bags containing '81 Topps. 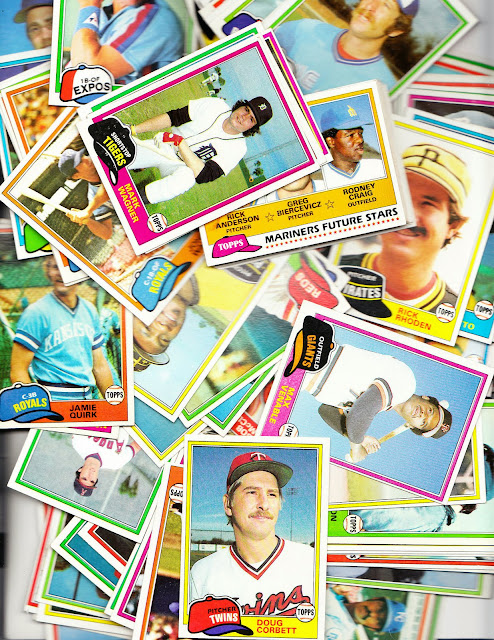 Still very cool. I will find uses for a lot of these cards.

I like 1981 Fleer simply because it takes me back to that time when we suddenly had options in card collecting. But when it comes right down to it, I don't like much else about that "first" offering from Fleer. The fronts were boring, the backs were even more so. But the opportunity to collect more than one Ron Cey or Dusty Baker card was just too irresistible.

I came up way short in completing the set, and I really have no intention of ever completing it, but it's still very, VERY cool to find cards that I collected when I was 15.

And here are players that I didn't have already: 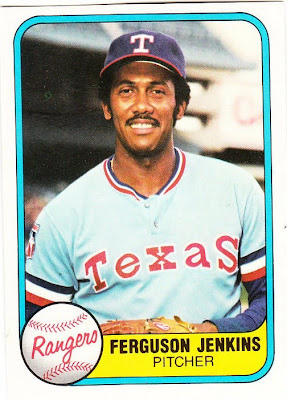 I remember Jenkins being a favorite of my brother, probably because he played for the Red Sox and the Rangers, two of his favorite teams. 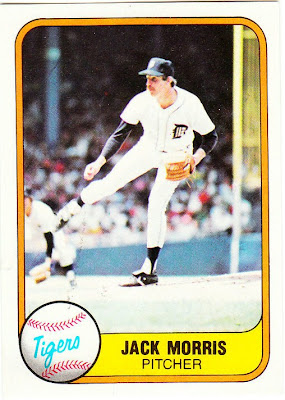 Early Jack Morris cards are fantastic. He's one of those guys I wouldn't mind seeing in the Hall of Fame. But I'm not going to rail about it if he doesn't get in. I'm not one of those people. 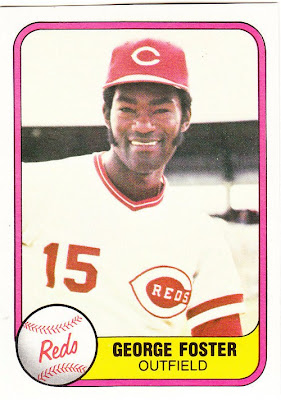 Look! George Foster is smiling! Would he still be in the Bad Ass club if I had seen this card prior to inducting him? Sure, he would. I saw the guy hit. 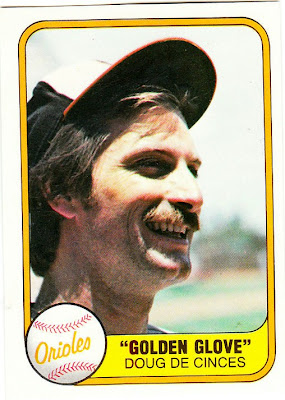 Fleer's decision to give random players "title" cards like "Golden Glove" were confusing to me in 1981. It still doesn't make much sense. Neither does the extreme close-up shot. 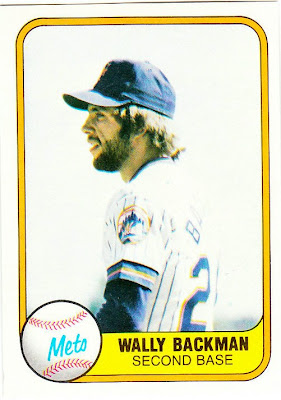 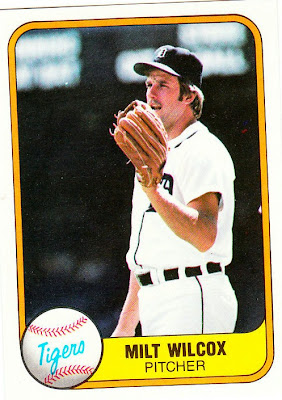 Here is a hallmark of early Fleer -- off-center photos (not off-center scans -- that would be me). Fleer had all kinds of issues with its re-entry into major set production -- photo problems, all kinds of errors. I'm not one of those people who thinks these were on-purpose to get collectors to buy their sets. Fleer just seemed plain inept back then. It didn't seem like a  marketing ploy. 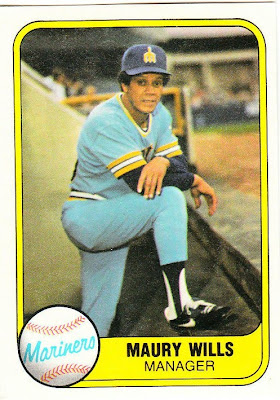 I would have loved to get this card back in 1981. After Topps gave managers their own cards in 1978, it stopped the practice until 1983. I always enjoyed manager cards, and getting a card of the former Dodger great would have been sweet. He wasn't much of a manager though. 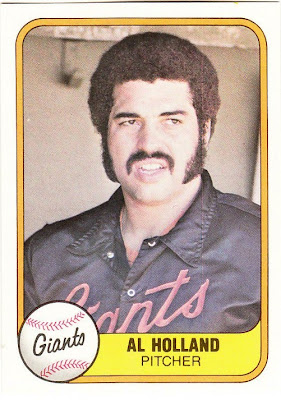 I look at a photo like this and wonder how my life would have been different if I could grow hair like that. 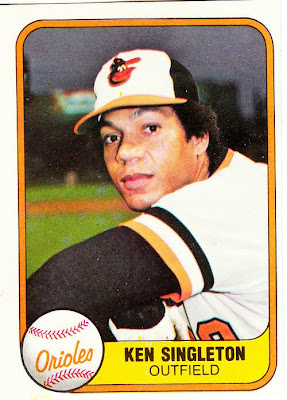 This may or may not be a night card. Perhaps it's a dusk card. A lot of the Orioles photos in this set were taken at Fenway Park. It seems like it was an all-day affair to take Orioles pix as some photos are in daylight and others are near nightfall. You can see the Marlboro sign lit up in the distance behind Singleton. 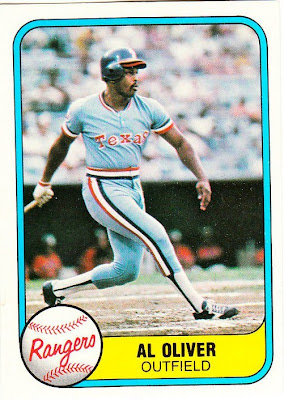 Al Oliver was another one of my favorites as a kid. I was thrilled when he came to the Dodgers, although he didn't have much left then. The Orioles in their orange unis lined up in the dugout add a nice effect. 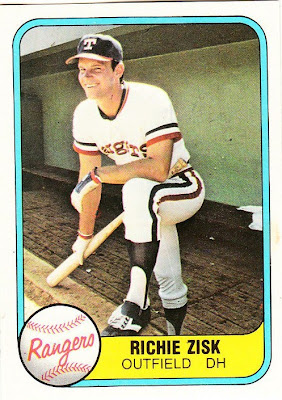 Always happy to get a card of a player who was such a pleasant interview subject. 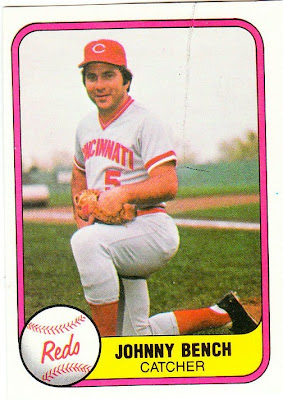 It's exceptional to nab a Johnny Bench card for just 3 cents, even if there's some sort of mark running through the card. 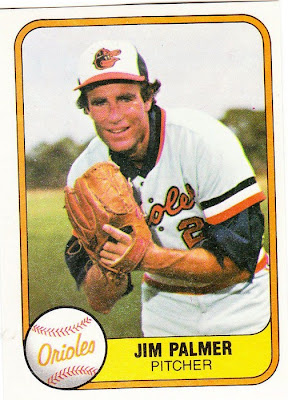 I saw very few Jim Palmer cards when I was young because my Orioles-loving brother would get them all, so this is probably the best card of the bunch for me.

All told, I found 59 cards that I needed. That's not too bad. It's a lot better than I do when I'm at Target.

It's cards like these that'll keep me going back to this particular dollar store. Originally, I didn't expect to find anything, but now can't wait to get over there and track down any other '81s that I might've missed. I think I'll do that tomorrow.

Mariner1 said…
If you have any Mariners cards in those 81 Fleers that you would part with, I have a good home for them. Let meknow which 81 Topps you are looking for and I might be able to help out.
April 7, 2010 at 7:48 PM

night owl said…
No, it's not the Dollar Tree. I read how the Dollar Tree has cards, too. But they are more recent cards, and my Dollar Trees (that's right, plural) refuse to stock them.

Motherscratcher said…
That's fantastic. There's a dollar store right next to my office and I'm going to check tomorrow to see what they have. The only thing I've ever seen there is Upper Deck X for some reason.