The problem with the '90s

April 28, 2010
I am here to alert you to a fine weekly baseball card feature on the most excellent Baseball-Reference.com Blog. I'll let the astute Andy do the rest of the talking about it:

From Andy at Baseball-Reference.com:


Click on that link to call up the relevant posts.

We would like to feature some of the excellent card blogs out there.
If you would like to participate, please email me at 88topps at gmail
dot com to direct me to one or two posts on your blog that you would
like to have highlighted. It doesn't matter if they are recent or old,
but they must contain scans of the front and back of a card that can
be used on our blog (minimum size 400 pixels by 285 pixels.) If I
choose to use your scans as the basis of a post, I will credit your
blog by name and also include a writeup about (plus link to) your
original source post. In return, I ask that on your blog you include
either a link or a post for the Baseball-Reference.com blog located at
baseball-reference.com/blog (not a link for just the main
Baseball-Reference.com site.)

We currently get about 40,000 pageviews per week and would love to
send some traffic your way. Please pick out a couple of your favorite
posts and send them my way!

I took a peek at the site and there are lots of cool cards there. Lonnie Smith, Diamond Kings, a 1967 George Brunet. But not only are there cool cards and cool discussion of the cards, but also insightful statistical analysis of the players or teams or something related to the card.

For example, I bet they could go to town with this card: 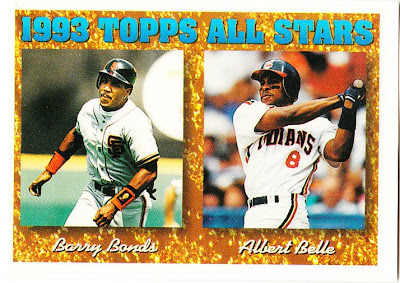 A couple of sweethearts, eh? I'm sure Baseball-Reference.com might discuss the similarities/differences of each player's enormous abilities in a statistical format that will cause you to see Bonds and Belle as you never have before.

It's far more than what I could do.

I would probably just focus on the emotional aspect of the two guys. You know, my gut-reaction to what I know about them. For example, what if I were to invite these two jerkwad ... er, fine upstanding gentlemen to dinner and my folks said to Bonds and Belle, "tell me about yourselves," what would they say?

Would they mention that one of them once hit trick-or-treaters with his car in a violent rage? Would they mention the spousal cheating and abuse? The stalking? The endless drug allegations? The bat-corking and then sending a player through the ceiling panels to try to remove the offending bat? The repeated blaming of the media? The refusal to deal with the media?

To me, this card pretty much sums up the '90s. I've mentioned before that I'm not a big fan of 1990s baseball. When I stumble across card sets from the '90s that were often unknown to me because I didn't collect for large chunks of the decade, I wince as I read the names: Sammy Sosa, Mark McGwire, Roger Clemens, Rafael Palmeiro, Jose Canseco and many, many others.

Especially with cards from the late 1990s, a lot of the players look like inflated freaks. I remember finding a few Pacific cards at the dollar store. I think they were from around 1998. Every player looked like they just spent 36 hours in the gym. It didn't look like baseball to me. It looked like weightlifters playing baseball.

Unfortunately, that's what I think of with most of the cards from the 1990s. I don't get a warm, fuzzy feeling looking at those cards like I do with cards from the '70s or '80s. The game really changed for the worse in the '90s (and I'm not saying that just because the Yankees won everything for a lot of the decade).

We all thought that it was great back then. But now we're trying to get it back to the way it was before the 1990s. I don't think we'll ever get it back to the way it was: we'll probably never see people who look like Bake McBride playing ever again. But hopefully, there is more of an emphasis on everything that makes baseball great. Not just the home run, but the well-pitched game, the double steal, the over-the-back catch and the squeeze play.

The Belle-Bonds card was sent to me by Rod of Padrographs. Thanks for the bad flashback, Rod. 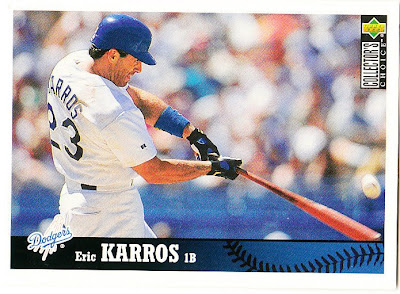 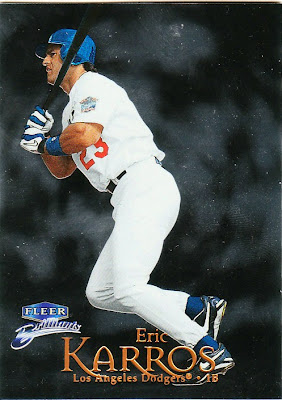 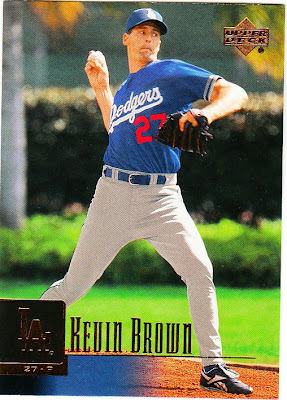 OK, so Brown was another one of those unpleasant '90s characters. But at least he wore the right colors for a few years.

Thanks, Rod. I think.