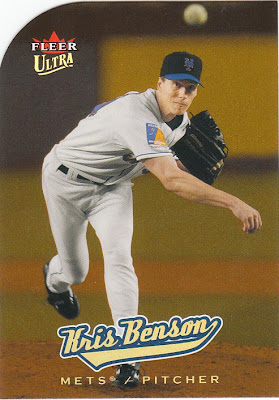 Around this time every season, I will come across a player in a boxscore and think out loud, "when did he end up here?"

That player this year was Kris Benson. He was the winning pitcher for the Diamondbacks against the Phillies last night. As far as I knew, he was still a Ranger. And even knowing that was quite a feat, because my brain keeps saying that Benson is still a Met, and Anna is still bouncing around in her Mrs. Claus get-up.

This is what happens when you get older. The job, the family, the house, the car, the school activities, the relatives all conspire to remove baseball from the center of your universe. No matter how hard you try to push baseball back to the center, something will come along and displace it. Baseball is merely a revolving planet, even if this blog makes it appear that it's my sole focus.

Once, I knew every player on every team. Of course, it was easier then. There were only 24 or 26 teams. And if I hadn't given up fantasy baseball, I'd still know just about every player out there.

The blogs help. There are fans of just about every team -- excluding the dastardly Rockies -- and that helps me figure out which players are on which club.

But I've come to grips with the fact that many, many people have a better idea of who the sixth guy in the bullpen for the Brewers is than I do. So after going through the rosters today, here are a few players who I had not accounted for:

Feel free to laugh, but I'll bet a few of you non-fantasy types didn't know Garret Anderson and Jamey Carroll were Dodgers (unless you read a certain blog, of course).

Jonathan @ RGB Cards said…
If it makes you feel any better, Fred Lewis only got traded last week. I didn't know he was in Toronto either until I turned on a Blue Jays game and there he was.
April 24, 2010 at 6:44 PM

Play at the Plate said…
Mercifully, Kris is no longer with the Rangers...yet another failed pitcher reclamation project by the Rangers.
April 26, 2010 at 2:37 AM