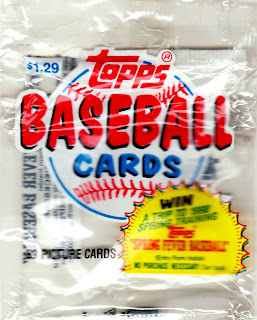 Well, my dreams of competing against the 2010 Heritage blaster fantasy league members by using a cello pack of 1989 Topps cards was dealt an immediate and crushing blow when I realized I am just too darn lazy.

My intent was to pick my fantasy team of 1989 players, find a comparable 2010 player, and then use those comparable players on my team. Well, finding comparable players is a long and excruciating task. I got through all of one-and-a-half players and gave up, beating myself up for the 45 minutes that I had wasted.

So, Dan Plesac, you will never find out how you would do as Matt Capps. And Alejandro Pena, you will never know whether your most comparable 2010 pitcher is Rafael Soriano, because I quit in disgust while going through the Minnesota Twins roster.

That means all you're going to see is what kind of a fantasy team I could form out of the 39 cards from the cello pack that madding sent me. And that's good enough, really. Say it is. You'll make me feel better.

All right, according to the rules, I needed to find two catchers, an entire infield and an outfield, a corner dude and a middle dude, an extra outfielder, a utility guy and seven pitchers. Twenty players.

I did pretty well in some areas, and not so well in others.

I'll start with the pitchers. A whopping 23 of the 39 cards were pitchers, by the way.

The starting staff features a Dodger and an ex-Dodger: 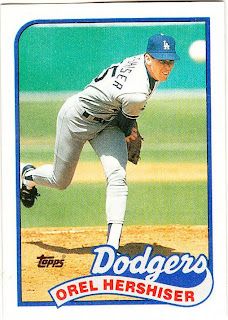 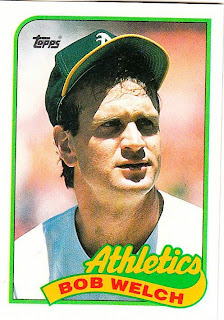 Two of my favorites, Orel Hershiser and Bob Welch. Awfully good pitchers, even if both seem to be ignoring my autograph requests. 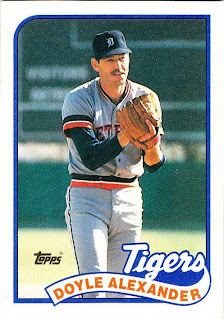 I'm adding Doyle Alexander as my No. 3 guy, someone who seemed like he would pitch forever back in the late '80s. He started his career with the Dodgers. 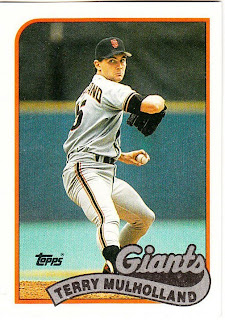 And here's another guy who was determined to play forever. He played for the Dodgers, too. 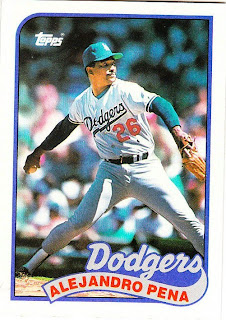 My bullpen includes another Dodger, Mr. Pena, who can start, too. 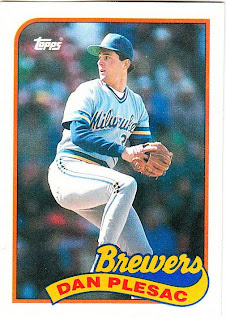 Here is Plesac, who most likely would be the closer, although he'd have trouble finishing games from the MLB studio desk. 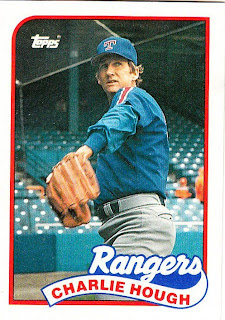 ANOTHER former Dodger, Charlie Hough is the final member of the pitching staff. He can start or relieve, too. Perhaps Tim Wakefield would be the guy to play him in the 2010 Heritage version. I don't really like the idea of having Wakefield on my fantasy team.

That is a damn fine pitching staff. But it's not as good as my infield. 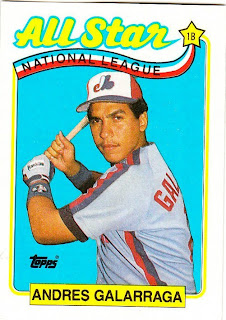 First base. The Big Cat is the power supply on this team. He looks so cool in a Montreal uniform. Much better than in a Colorado purple thing. 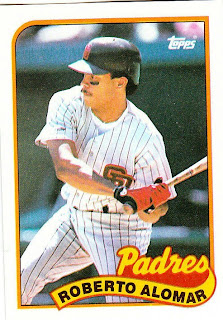 Second base: Future Hall of Famer Roberto Alomar at the start of his career. Finding a comparable player to him today might've been tough. There were no rookie stars at second base last year. 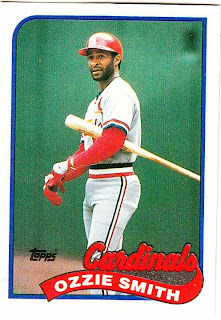 Shortstop: Current Hall of Famer, Ozzie the Wizard. You can't get better than that. The back of his card says "Ozzie performs a somersault upon taking the field." Really? I never knew. 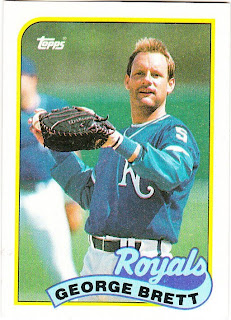 Third base: More Hall of Fame power. Will this team ever lose?

Oh, yes it will. Here come the weak links. 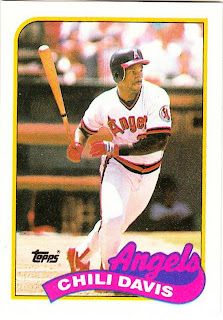 The first guy is pretty good. Chili Davis had a coveted rookie card back in the days of "Ebony and Ivory." Fortunately, he got out of that awful Giants orange (but then donned pinstripes. Yick). He'll make for a nice center of the lineup. 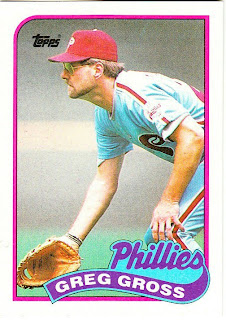 Here is where things take a dark turn. Gross was decent back in the mid-1970s, but by 1989 he was at the end of his career and strictly a role player. 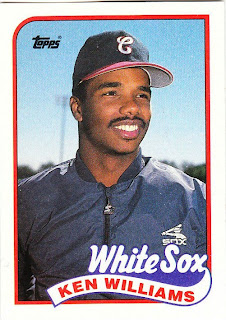 Because pitchers took up so much of my pack, Ken Williams is my other starting outfielder despite a .232 career batting average at the time and a trip to Triple A Vancouver in 1988. Maybe given his present-day GM duties, he can work on finding some outfielders for my team. 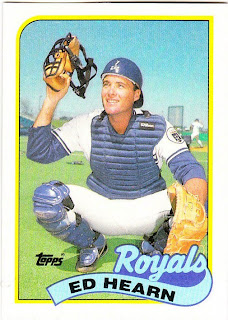 The two catchers are miserable. First is the starter, Ed Hearn, who was never a regular starter as far as I know. I believe Hearn made an appearance in Topps' Fan Favorites series, which I find puzzling.

Here is the other catcher ... 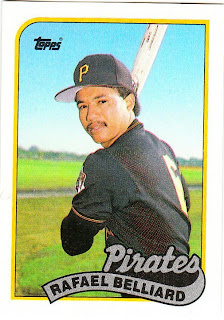 Yes, Rafael Belliard. I know he never played catcher. He's all I've got.

OK, onto less depressing areas. The bench. It's respectable. 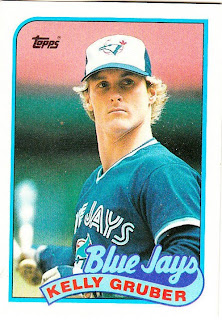 The corner infielder is the whatever-happened-to-Kelly Gruber. He had a break-out year in 1988, so he's a nice fit. 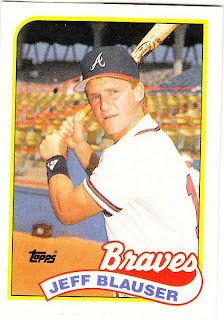 At middle infielder I've got Jeff Blauser. He was just getting started at this point. But he helped the Braves to a World Series -- although I sometimes wondered how -- so I'm suiting him up. 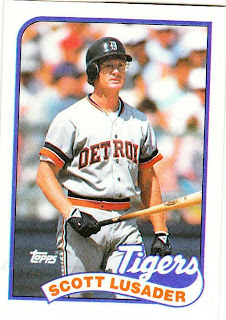 The extra outfielder is a guy that is a complete mystery to me. Scott Lusader? I have no idea what he can offer. Not much, I suspect. 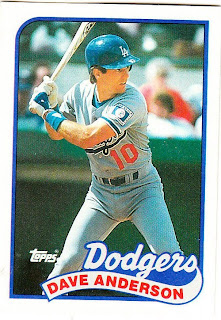 The utility guy is third base/shorstop of the '88 Series champions, Dave Anderson. Hopefully he can play the outfield, too.

My manager is Tom Trebelhorn, only because the other option was Doc Edwards.

So this is the starting lineup. Very top-heavy:

Perhaps at the end of the summer, I'll total up the team's 1989 stats in each of the fantasy team categories and see how it would have done in the 2010 Heritage blaster league. But I'm not totaling it now because I'd have to calculate on-base percentage and earned-run average and it's a holiday weekend and I've got relatives coming in and they'd be wondering why I'm calculating OBP -- OK, they'd be wondering what OBP is -- when I should be paying attention to them.

So later. Much later.

That's the team. I won't tell it to win like it's 1989, because they're not going to be competing for anything.

And that means I can ask:

Is there anyone left on earth that needs some 1989 cards?

night owl said…
Believe me, I'll be using baseball-reference when the time comes. My days of mathematics by hand disappeared when I took my last required math course in college.
April 2, 2010 at 11:10 PM

Matt Runyon said…
Great infield, good pitching staff, bleh outfield, absolutely painful catching. It would be fun for a bunch of us to pick up one of these types of packs and see what we can come up with for a "fantasy team"
April 3, 2010 at 1:13 AM