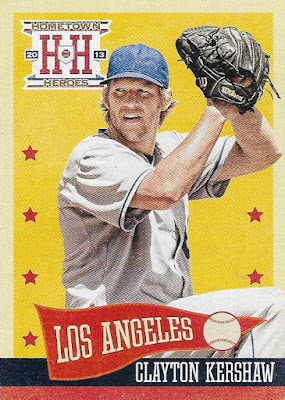 All right, it's fairly obvious at this point that I'm not going to be able to tackle It's Like Having My Own Card Shop's anniversary contest in proper fashion. For weeks I've been staring at the possible writing exercises and coming up with nothing.

Most of the prompts, to be honest, I don't feel like writing. I don't care how nice the prizes are, I will not write something I do not feel.

But what I did do recently was share my collection with someone else. It's not on video. Sorry. I'm sure I'm disqualified. But I like the story too much so I'm writing it anyway and entering it in the contest. Let the controversy ensue if I'm chosen the winner.

So, here's the story:

As you know, I've been through a lot the last several months, particularly the last two or three. Both of my parents passed away, a month apart, from terrible diseases and it's been a struggle running my own life while all of that was happening.

However, I refused to -- and continue to refuse to -- dwell.

Time and again, people I knew, whether relatives or friends or friends of my parents, talked about how awful the situation was, stressed what a terrible burden me and my brothers were handling, and discussed the unfairness of it all.

I didn't have a lot to say when the conversation took that turn. I still don't. Yes, I know it was as difficult a situation as I've ever encountered. However, I have always preferred looking for the good side of bad situations. It's just the way I am. I may seem hypercritical sometimes, but overall, I prefer looking for silver linings. I am basically a positive guy.

To me, continuing to bemoan my fate, whether in conversation or even in my own head, is useless. It doesn't accomplish anything and it's so the opposite of what I want to talk about that when the topic comes up, I can barely form words that show the person I am listening.

I made my peace with my parents' predicaments months ago -- my mother last summer when it looked like no matter what she had, it would not end well, and my dad last April when I saw him using a walker out of the blue and all of the puzzle pieces clicked together.

Those were the "oh, woe is me" moments and they didn't last long. I brushed myself off and knew without a doubt we were still so much luckier than many, many people.

And, yes, that's me clinging to a silver lining.

It's just what I do.

Throughout the ordeal, I made contact with many family members and folks I barely knew by name. I've gotten to be friends with some of them and I've reconnected with family members long forgotten. I just talked yesterday to my house-bound aunt, now 89 years old, and have made regular phone conversations with her a habit. I'm so glad we have that now.

That is a silver lining. There are so many.

And now, the baseball card part.

Among the many family members who have wandered in an out of our year-long trial are my daughter and my nieces and nephew. Those poor kids have gotten a front-row glimpse of how brutal life can be. One of those kids is my brother's son. He's 12.

A couple of years ago, I found out that he and his sister collected baseball cards. I gave them a few packs of cards one time during a visit.

During a more recent visit to my parents' house, for their grandfather's funeral, I was working through various affairs, financial issues mostly, and I decided I needed a break. I wandered down to the basement where my nephew was sleeping during his stay. I asked him if he still collected baseball cards.

I asked him what kind of cards he collected. I already knew he liked the Orioles. My brother is a lifelong Orioles fan and now he's foisted that unfortunate rooting choice on his kids. (In the early stages of Baltimore's terrible season, when he and I were sitting in my mother's hospital room, I couldn't resist asking him how he was handling Chris Davis' terrible start).

But he surprised me by saying he also followed the Mets and Cardinals. "That's interesting," I said to myself again. "I suppose when your favorite team is so bad, you have to pick alternatives."

So eventually I went home and when I finally got to the stage when I could send out card packages again, I put some together for several collectors -- and one nice fat box of cards for my nephew.

Up to that point, I don't think he knew I collected. I had never discussed my hobby in front of him. But I broke the ice here. I told him I wouldn't overwhelm him with cards. I said I have a lot and he doesn't need to be a pack rat like me. But I tried to give him a nice selection geared toward his interests. I added a bunch of Orioles, both modern and from my brother's and my childhoods, and even a couple vintage items. I found some Mets and added those, same with the Cardinals. I also tried to accumulate the stars of the day, no matter what team, because I know kids like to follow the modern guys. I also sent him a couple of those Fleer box sets from the '80s because he might think those guys were SO OLD.

I then sent off all the packages, including his. A few weeks later, I received an envelope in the mail in my nephew's 12-year-old handwriting. In it was a thank you note. He said he and his dad would determine which cards would fit in the collection.

But there was something else in the envelope. 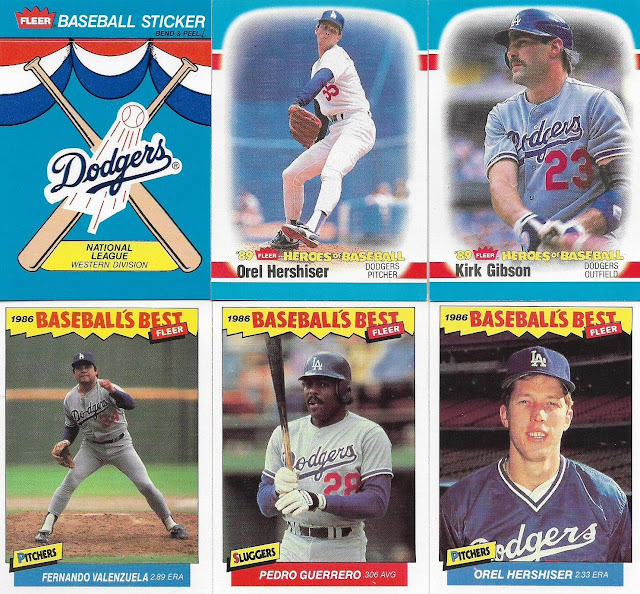 These cards appeared along with the Clayton Kershaw Hometown Heroes card at the top of the post.

My nephew had sent me Dodgers!

This had now become a trade package!

I didn't expect this at all. Firstly, I have all these cards already, he didn't have to do that. But mostly, I didn't know he knew about the trade ritual.

It's funny to see the Kershaw card come back to me. I had thrown it in as part of the collection of modern-day stars. I suppose a kid who follows the Mets and Cardinals isn't interested in any Dodger cards. Perhaps that's why all the Dodgers that came out of the Fleer box sets returned to my house, too. He had to get them out of his collection!

But that doesn't matter. My nephew -- if he didn't know already -- now knows I like the Dodgers and Dodger cards.

Perhaps he is only a year or two away from scrapping the baseball card habit. You know how the teenage years can be. I admit it seems strange to me already for a kid of this age -- in this age -- to even be interested in cardboard cards. Why isn't he immersed in video games 24-7?

But there's something very comforting about someone in the family who collects -- and who sends cards through the mail.

It's likely none of this would have happened if I didn't go through what I've gone through the last few months. I probably wouldn't have even thought to share my collection like that.

There are silver linings everywhere if you look for them. Sometimes they even include baseball cards.

Jeremya1um said…
So glad you got to help your nephew out with getting some cards, and it sounds like him and his dad are good people.
I aim to be more like you and view the positive side of things. It’s far too easy to be negative for me, and I like the way you chose to handle bad situations.
Lastly, I think you should get in the contest just on the context of how cool your story is.
July 29, 2019 at 7:43 PM

Nick said…
Great story! It warms my heart to know that there are still 12-year-olds in the hobby despite all the technological chaos around us. A few years ago I found out one of my college professor's kids collected baseball cards, so I put together a nice box of stuff for him that he really enjoyed. I saw my teacher again recently and she told me her son no longer collected -- which was, though expected, still a huge bummer.
July 30, 2019 at 1:22 AM

Nick Vossbrink said…
Awesome. Both in the trade package and in the fact that kids are still sending things via mail.
July 30, 2019 at 12:42 PM