July 20, 2019
(Today is National Ice Cream Soda Day. As a kid, my folks would take me to Parkside Candy, a Buffalo institution, to get several flavors of industrial-sized lollipops. Then, one day, my dad introduced me to ice cream soda at Parkside. I was spoiled instantly. No ice cream soda I've had since has tasted as good as that one at Parkside's. And now, Cardboard Appreciation. This is the 283rd in a series): 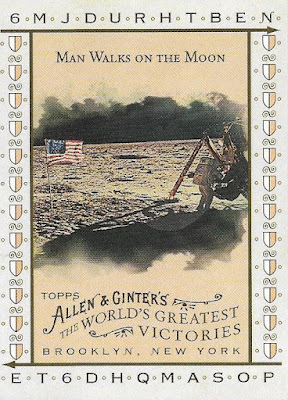 In case you haven't heard, today is the 50th anniversary of Apollo 11 landing and man walking on the surface of the moon.

I had just turned 4 when this epic, audacious moment took place on U.S. televisions everywhere. I assume my folks were watching but I have no idea. I have no memories of the moon landing.

However, the after-effects of that day followed me through my childhood. Astronauts loomed as the country's biggest heroes, larger than life, bigger than even Joe Namath or Hank Aaron. Kids brought space-themed lunch boxes to school, and we often took breaks in class to view the latest NASA venture into space.

My friend's mother bought Pillsbury's space food sticks -- modeled after the high-energy snacks the astronauts ate -- and to this day I remember them as a childhood, culinary masterpiece, on par with Bottle Caps and Milkshake candy bars. In reality, space food sticks were probably no better than a primitive energy bar but I yearned for another taste through the rest of my childhood.

As the '70s progressed, space food sticks faded from the market and so did the public's fascination with space travel.

The space program doesn't feature the star power it did when I was a kid. And there's plenty of stupid stuff out there like moon-landing conspiracy theories.

But fortunately, Topps has done an adequate job of remembering the moon landing in its cards. In 2008, the Eagle Lunar model's historic feat was commemorated in Allen & Ginter's World's Greatest Victories insert set, still one of my favorite A&G inserts (although not the greatest look). 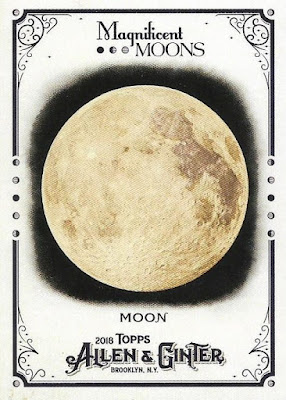 The triumphant moment is recognized on the back of the first card in the Magnificent Moons insert set in last year's A&G. 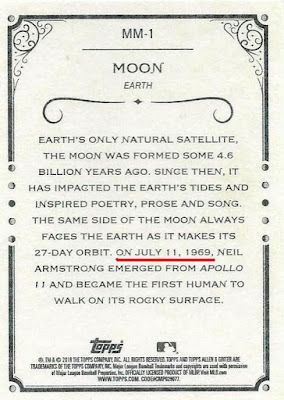 Considering that Apollo didn't launch from Florida until July 16, 1969, I think Armstrong walking on the moon five days prior was probably impossible.

Is this another case of A&G's quality continuing to slide? 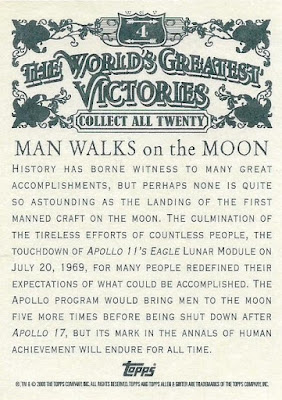 Fortunately, Heritage last year also produced a moon-landing card as part of its annual News Flashbacks set. I don't have that card, but here's an image of it: 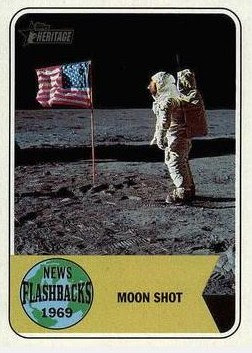 And here's the back: 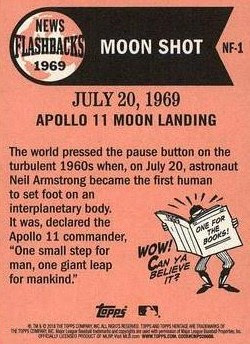 Although I don't remember anything about the initial moon landing, the thrill and the pride over the U.S. space program is something that I totally associate with childhood, just like the Bicentennial and Grand Funk Railroad. Astronauts were brazen cowboys and we loved it.

Tonight at some point, I'm going to rewatch the "Mad Men" episode that takes place during the moon landing. It really gets across how awe-inspiring that moment was.

The things humans can do sometimes.

bbcardz said…
I actually remember seeing the Apollo moon landing on TV--it was the most anticipated moment of my young life back then.
July 21, 2019 at 5:26 AM

gregory said…
Got to love the back of that News Flashbacks card. Have you ever read "The Right Stuff" by Tom Wolfe? Quite an interpretation of the space program and the Mercury Seven.
July 21, 2019 at 8:08 AM

Adam said…
CBS was running their original coverage of the moon landing on their website last night. I watched some of it...such an amazing moment.
July 21, 2019 at 9:33 AM

Fuji said…
I remember how excited I was to watch shuttle launches back in the early 80's. Watching Armstrong and Aldrin walk on the moon must have been on a completely different level. Wish I would have thought of writing a tribute post... but it looks like you and Billy have it covered.
July 21, 2019 at 1:13 PM

GCA said…
Should have done a post like this myself. And I need that WGV card! I was at my dogsitting gig watching C-SPAN run the entire CBS coverage of the landing. Can't get enough of all the new documentaries. Hope my space binder doubles in size after this.
July 21, 2019 at 5:19 PM

AdamE said…
I remember as a kid the whole school would gather in the cafeteria to watch shuttle launches. It was always a big deal. Until Challenger. We never watched another launch again after that.
July 30, 2019 at 7:04 PM