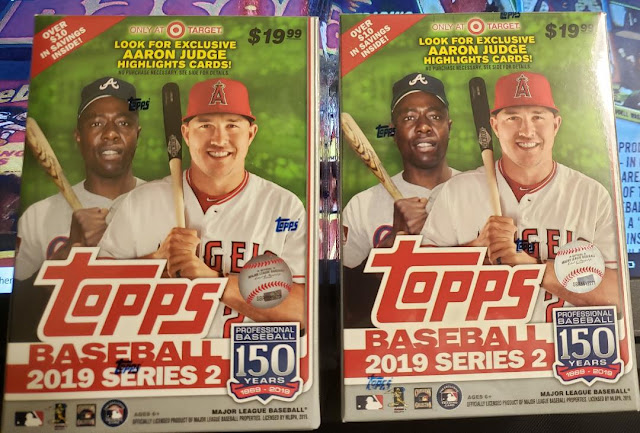 Greetings, readers! I have been on vacation the last several days, roaming free during my birthday week.

For the first time in a long time, I did not celebrate my birthday at my home base. I don't know why my birthday always seems to end up at my house. It wasn't like that when I was young. Since my birthday is in the summer, I always seemed to be celebrating it at the park or the beach or at some relative's house far away.

But as I got older, the gift-opening usually happened here at the house. Probably something about me wanting to be as close to the TV as possible with the All-Star Game usually occurring somewhere near my birthday.

So, anyway, I spent my birthday with my daughter in her new digs several hours away. It was very nice, even though I didn't receive my usual birthday cake.

Also, both wife and daughter happened to buy me blasters of Topps Series 2 as birthday goodies. It's a bit of a coincidence that both were blasters of Series 2. I did give them a list of modern cards to purchase -- Stadium Club, Big League, Series 2 or Heritage. But I didn't request a specific size (rack pack, loosie, etc.). Before I knew it, I was pulling Series 2 blasters from Target out of each gift bag!

Each blaster was purchased in typical wife/kid fashion. The wife bought it during an hours-long shopping trip with her sister. The kid bought it by going online to Target and ordering it up.

I ended up opening both of them in my hotel room. I thought I would compare the blasters and see which one comes out on top. But in a perfect bit of cosmic self-preservation, I lost track of who gave me which blaster. Good thing, I don't think it's wise to broadcast that wife or daughter got me the best blaster! That information should be confidential!

So here is a quick breakdown of each birthday blaster.

FIRST CARD IN EACH BLASTER 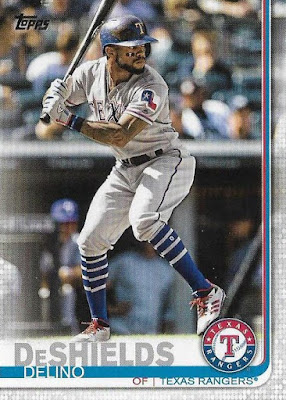 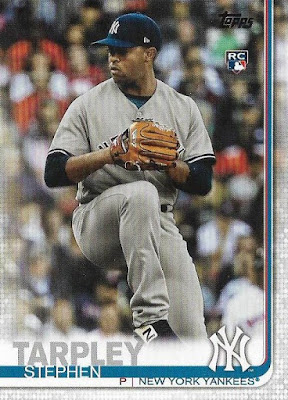 
Winner: Box 1. DeShields may remind me of his dad and his lousy showing for the Dodgers (not to mention one the worst trades in Dodger history), but Tarpley is a Yankee and a rookie and I can already hear some overeager pinstripe fan boy calling him the next CC Sabathia.


BEST CARD IN EACH BLASTER 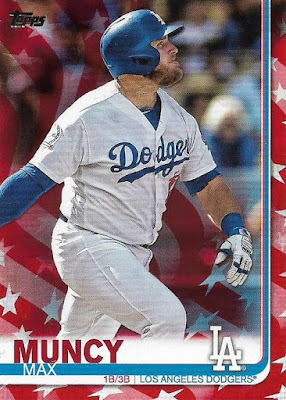 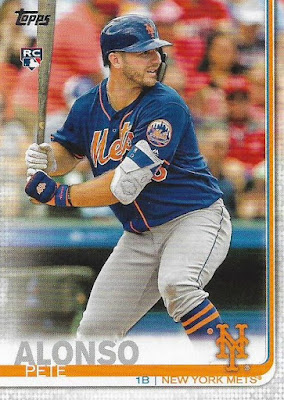 
Winner: Box 1. I have never pulled one of those Independence Day parallels (numbered to /76) and to do it for the first time by pulling a Dodger and a notable Dodger at that, makes this blaster the best of the two easily. It's not even a contest anymore. But for the sake of this post, we'll go on ... half-heartedly.

I feel a bit bad for Pete Alonso. I've been trying to catch up on my baseball viewing this month and Alonso is everything that I've read. Everyone mentions his hitting. But he's fun to watch in the field and he seems to a quality guy all-around. Still, he's no Dodger and there's no flag behind him.


MOST INTERESTING CARD IN EACH 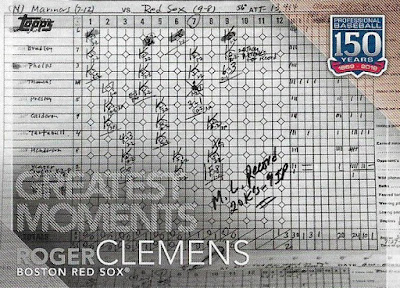 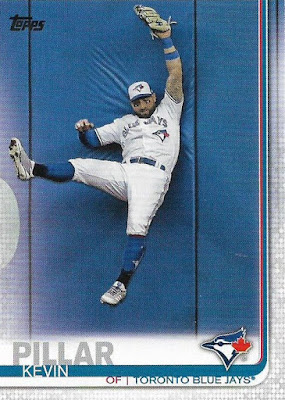 
Winner: Box 1. Traditionalists will go with Pillar -- great image (if he indeed caught it). But to see a scorecard (and nothing but a scorecard) of a 20-strikeout game on a baseball card is fascinating. So many questions: whose scorecard? Did it come from someone on the Red Sox? Was it from one of the 13,414 in attendance? Did someone from Topps just draw it up a few months ago and pretend it came from April 29, 1986? Why didn't they use an image of Clemens?


MOST ANNOYING CARD IN EACH

Box 1: None really, outside of a handful of dupes. 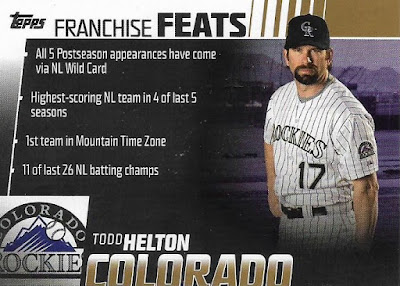 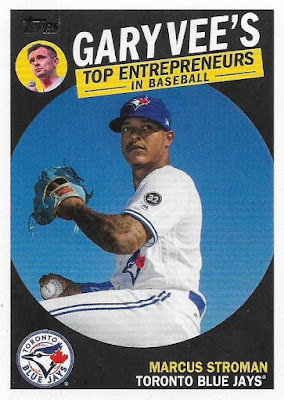 The Todd Helton insert is obviously a parallel. I recognized it right away as the other Franchise Feats cards do not feature the gold design in the top corner, nor is the team name filled in gold. Parallels of inserts still bother me and I still do not expect them, although I should totally plan for them by now.

The Gary Vee card simply baffles me. There are people on Twitter that get outraged by this Gary Vee guy. I barely know who he is. Entrepreneurs don't interest me and guys who land in the hobby and all of a sudden declare it as the place to be (dude, I could of told you that the year you were born), are a little annoying. But beyond that, I just don't get why he has to be plastered on an insert. I can't imagine a kid getting excited over this (outside of a Blue Jays collector) and that's how I judge a card's value. 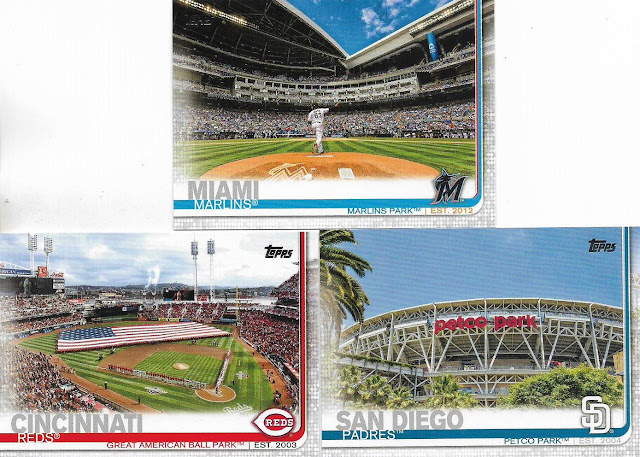 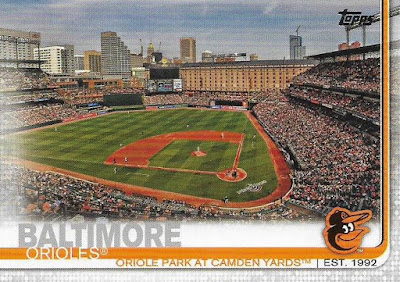 Box 2: One of them (actually two, but the Marlins one was a dupe).


Winner: Box 1: Even though the Orioles one is beautiful and the Padres one shows the OUTSIDE of the stadium (did they throw the photographer out?), three is better than one. Trying to get all of these. 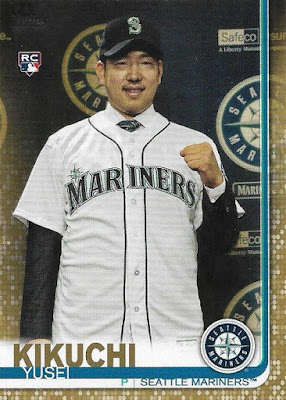 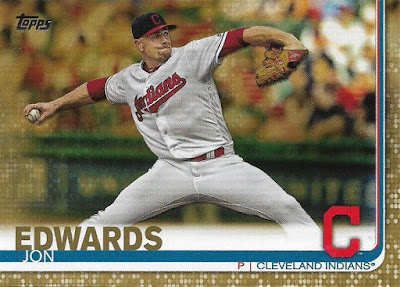 
Winner: Box 1. I don't know much about either player, which falls in line with me pulling gold parallels of players that barely register. However, the Kikuchi will fill in nicely for the Opening Day Kikuchi that I put in Dime Box Nick's package only to see that he landed one at a card show. 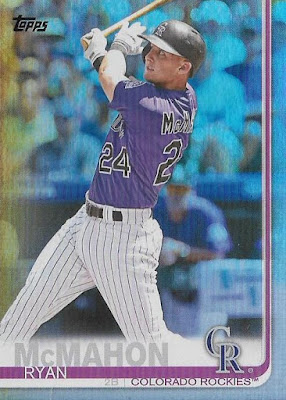 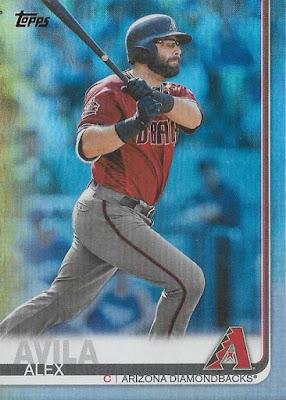 
Winner: Box 1. Pulling foil cards of players from the Mountain Time Zone is not one of my favorite things to do. But lucky for Ryan McMahon, he merely plays for the fourth team I would eliminate if I was baseball commissioner. Alex Avila plays for the first. 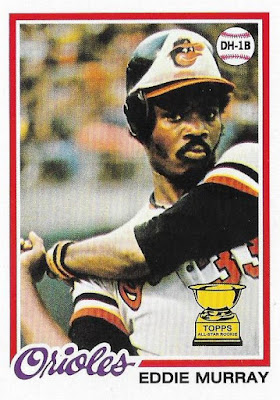 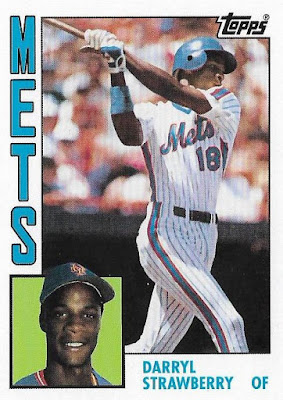 
Winner: Box 1. The name and position font are not correct on the Murray card, but come on, it's one of the greatest rookie cup cards of all-time (if not the greatest). Darryl doesn't have a chance.


BEST CARD THAT I THOUGHT WAS AN SP BUT ISN'T 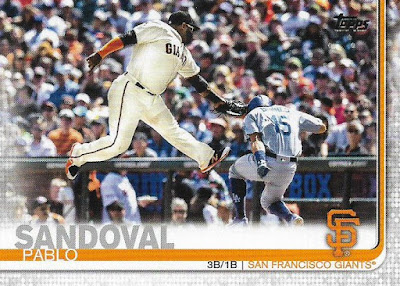 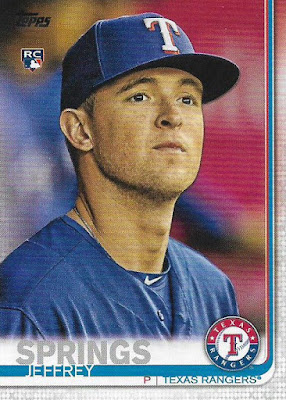 
Winner: Box 1. Pablo Sandoval attempting to tag Austin Barnes (I refuse to believe that Sandoval can even do what he's alleged to be doing there) is a nifty photo that I was almost sure had to be an SP. The Springs photo I thought was unusual -- and possibly an SP -- just because you don't see tight shots on players anymore on cards, unless they're in Heritage. But not even Topps is making SPs of Jeffrey Springs.


I think if you are keeping score at home you have realized that it was a clean sweep for Box 1. Good thing I don't know who gave me which box!

A couple of other observations, regardless of box: 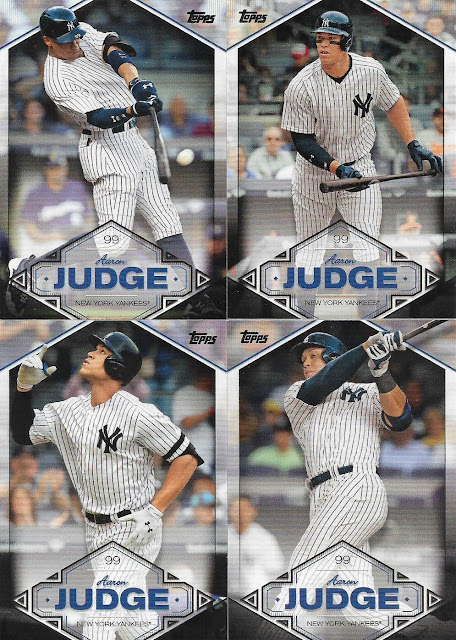 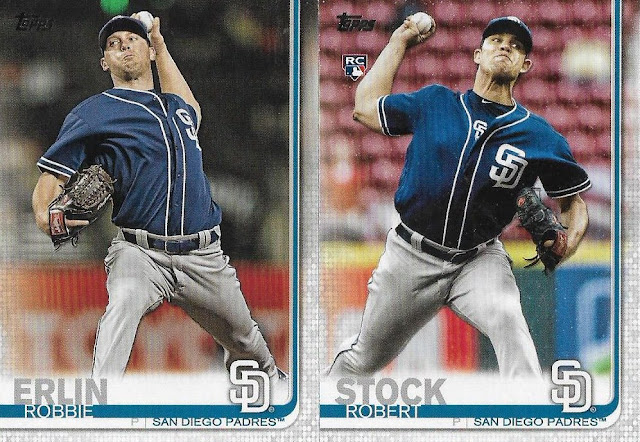 These I pulled out of a pack, back-to-back. If you're not going to mix up the shots, maybe make sure they're a few cards apart. 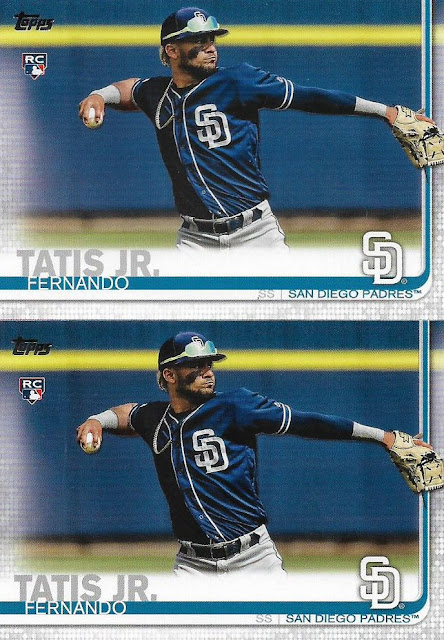 Staying on the Padres theme, there was a Tatis Jr. card in each box. Both box wanted me to get RICH! 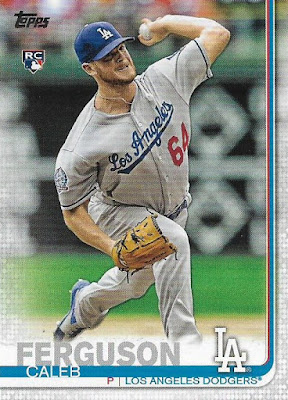 Finally, out of all of the cards I pulled (99 each box, it says on the front), this was the only Dodger I pulled that I needed besides the Muncy flag parallel.

Jeremya1um said…
Glad you got the Muncy parallel. It’s great that it’s a card you have been waiting on for over a year and that you pulled a low #d parallel. I hope you continue this string of good pulls.
July 18, 2019 at 8:11 PM

Jonathan said…
I'm with you. I don't think I'd let then know the rating even if you knew who gave you which one. Don't want to risk not getting cards again. My wife wife won't ever buy me cards anymore.
July 19, 2019 at 8:31 AM

Fuji said…
Solid boxes. Congratulations on pulling that Muncy Independence Day card. I'm hope to find a 2019 Topps factory set on Blowout or DA Cardworld's 2020 Black Friday sale list, because I really like this set. I just can't stand all of the meaningless inserts, so building it the old fashioned way isn't going to happen.
July 19, 2019 at 12:07 PM

David Switzer said…
I've never heard of Gary Vee. But clearly I don't know about the people that Topps thinks I should care about, based on this year's non-sport entries in Allen & Ginter. Cool that you got a nice card of your favorite team That always makes a blaster more fun.
July 19, 2019 at 6:56 PM

Nick said…
"However, the Kikuchi will fill in nicely for the Opening Day Kikuchi that I put in Dime Box Nick's package only to see that he landed one at a card show."

Actually I still need the Opening Day Kikuchi (and that gold parallel too!) -- the one I found at the show was the standard Series 2 base. Very much appreciated, sir! Also the Clemens baffles me. A photo of him appears on a different one of those 150 Years inserts ("Greatest Seasons," I think), so I don't think it has anything to do with licensing issues. Just a little outside-the-box thinking, I guess.
July 19, 2019 at 10:35 PM