While you were summering 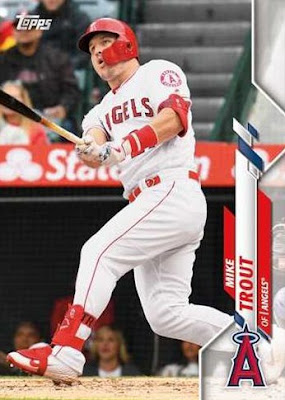 Topps publicly unveiled the design for 2020 flagship yesterday, while I was in the middle of a four-hour car trip.

Needless to say, it was a surprise. I didn't expect Topps to do anything like that this early. The last five years or more, Topps has revealed the next flagship design in the middle of August. This still seems terribly early to someone who as a kid opening packs didn't know what the design looked like until he opened his first pack, but at least it fell around the same time and I could prepare in my usually inefficient manner.

Topps knows nobody pays attention to anything in July, right? July was created so you didn't have to notice anything. Except lakes, you can notice lakes in July. And trees. And frogs. And you can notice baseball but nothing that has to do with marketing or release dates or added value. Just fun baseball stuff that takes very limited brain power.

But, no, Topps is determined to wake you up in the middle of July because it needs to be NOTICED. Every business is fighting for its life out there and they're going to annoy who they need to annoy to stay relevant. LOOK AT ME! I AM RELEASING A PICTURE OF SOMETHING YOU CAN'T EVEN BUY FOR SEVEN MONTHS! Please don't forget me!

Here is what I notice:

I'm not going to buy much of that.

Some of this is because Topps refuses to return to its roots and put damn borders around its card edges. None of this is because the writing is sideways. Sideways writing is a well-worn tradition in baseball cards. Look at 2005 Topps. Look at 1999 Topps. Hell, look at half the sets released in 1999. Look at half the sets released in the late 1990s! Sideways writing everywhere.

Everyone lived. They titled their heads up to watch Big Mac or Sammy slam a home run, then tilted their heads to the side to read their baseball cards. It's not a big thing.

My general issue is the numbing similarity of the design to other recent designs. You graphics people may have noticed that Topps is committed, fully and completely, to the slash. The slashiness of its graphics first appeared around 2014 and was rather noticeable in some of its 2015 inserts. Then in 2016, nobody could avoid the slash. 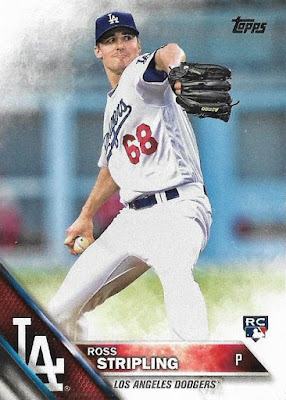 Clink! It arrived like knife sliding against chrome until it locked into place. On every card. Angular slashiness.

The angular graphic lines continued in 2017, both in flagship and in just about every insert. 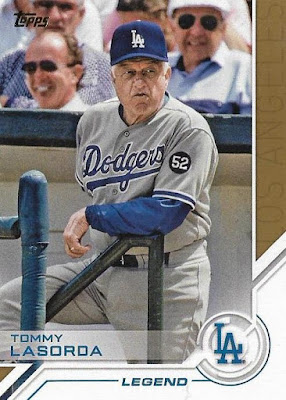 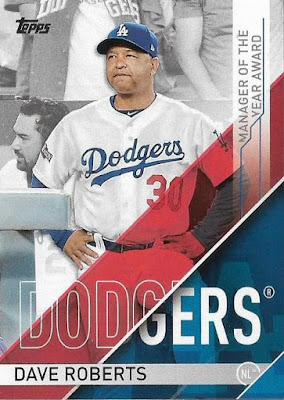 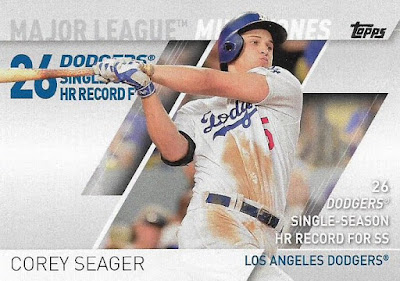 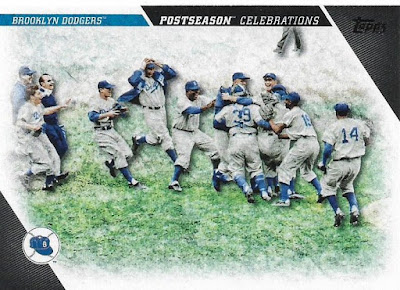 Diagonal lines, boys, that's what it's all about. Triangles. Parallelograms. Lines that make a sound, cutting across your vision. 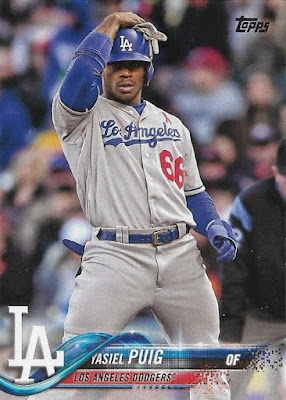 In 2018, more of the same. The player name and team name trail off to the right until it falls to pieces, leaving a diagonal slash at the end of the bar. 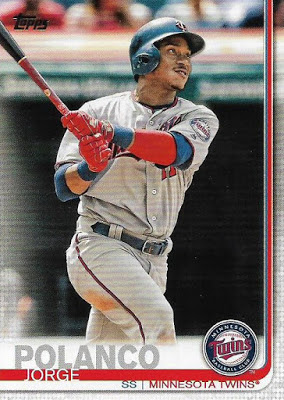 I think this is why 2019 flagship appealed to me immediately. There is no obvious slashing in the design. However that doesn't mean the slashes have stopped. They are all over the Topps Now cards this year. 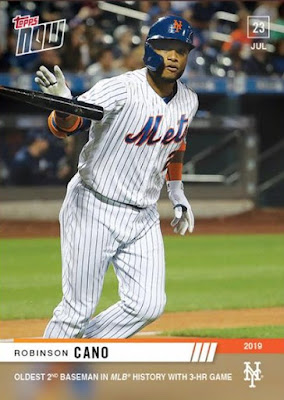 So the slash marks have never been that far away the last five years or so. 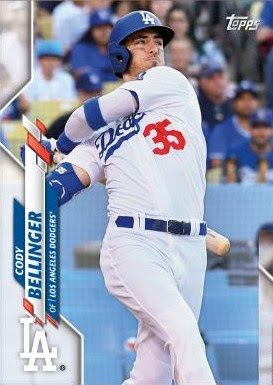 And with 2020, pointy edges and northwest-to-southeast patterns are back in a major way. Just about every graphic element is at an angle (pay no attention to the graphic squib in the bottom right corner, that's me cropping out the card overlap in Topps' image).

As usual, I try to find a past design that resembles the newest design and Bowman jumped immediately to mind. It looks a lot like modern Bowman, which does not appeal to me at all. But which Bowman set?

Turns out it is a very slashy set from the start of the slashy craze: 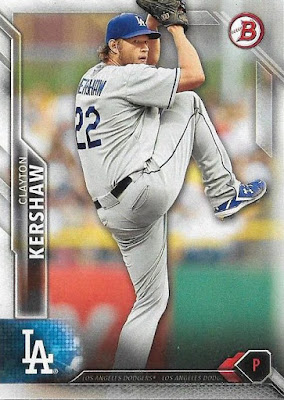 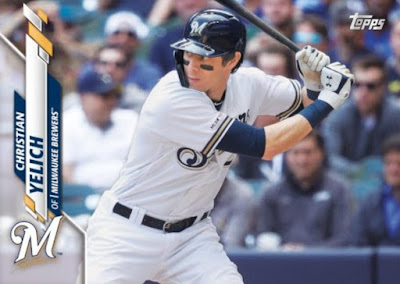 There is some hope, I guess. The vertical cards (because we're going to do this half horizontal/half vertical thing forever) seem to provide more breathing room and could produce some nice photos -- provided that the pictures are sharper than they are in 2019 flagship.

The vertical nature of the 2020 design gives me some bad flashbacks to 2007 Upper Deck: 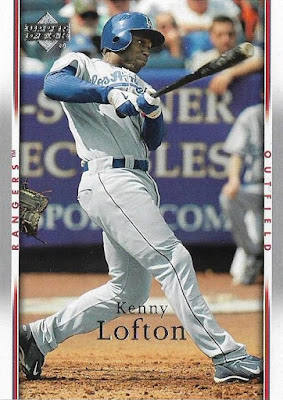 When the cards left you claustrophobic.

The 2020 design is really a continuation of the designs from the last four years. It doesn't break any new ground and while it's not off-putting at all, it does make me feel sad for the design when folks do their "designs of the 2020s" retrospective. 2020 is going to look terribly dated. And I still won't be trying to complete a post-2015 flagship set.

So, those are my initial 2020 design ramblings. I thought I would be doing this in August. But Topps wanted to be needed.

I hope they don't keep pushing up the date when they release the next year's design. At this rate, it will be showing off the following year's design before the current year's set appears on shelves.

Chris said…
My instant reaction to this is that it's my favorite design of the decade.

Jeremya1um said…
You totally hit it on the head. Slashed everywhere, and it totally resembles 2016 Bowman.
I see a little bit of 2003 Flair Greats in it with the part of the card with the logo.
Someone should hold a contest where everyone can design a layout that is better than 2020 Topps, people vote on it, and it is produced as a better option than Flagship or Panini. This is beginning to get obnoxious.
And you are right about the release of the photos being early. When I went back and looked at old blog posts, the ‘19 photos were released around August 16, ‘18 was around August 7. Middle of August is fine, but July seems a bit early, especially with Series 2 barely being on the shelves.
July 26, 2019 at 8:16 PM

Nachos Grande said…
I've more or less given up on flagship for a number of years now. I agree that borders need to make a return. I think Topps is playing the design much "safer" these days, little incremental changes rather than a full design overhaul. Because of that, it makes differentiating one year's worth of designs from another year's much more difficult. Everyone knows the difference between a 1990 Topps and a 1991 Topps (and a 1991 from a 1992, etc.). However, somewhere along the way Topps gave up the massive changes - probably a focus group decision or something.
July 26, 2019 at 8:57 PM

Mike the History Teacher said…
I agree with the consensus here -- I don't like the design either.

ToppsBawlyn87 said…
Incomplete statistics is what put got me selling off all my modern collection, but year old photos and designs in 2020 is another reason for me to stay away. As a factory set buyer, I'd be getting these year old cards in July 2020. They might as well release them now and call it 2019. Bon Voyage, I'm sticking with vintage.
July 27, 2019 at 11:03 AM

steelehere said…
The 2020 Topps set immediately reminded me of the 1996 Leaf Preferred set when I saw it.

JediJeff said…
Late to the game (post): that Yelich card is HORRIBLY weighted. They are centering the image on his eyes, then slapping the design on the card, which is making the entire card "lean" to the left. It would have taken just a few seconds to move the center point of the image so the card is weighted properly, by why expect Topps to do anything smart.

Defenders50 said…
I'm choosing to be the optimist here. Next year's Heritage has a very good chance to appeal to myself, someone born in the late 80s, and so I'm looking at this as a chance to save up more funds for chasing that instead of this.

I wonder if Topps really wanted something modernistic/futuristic for 2020. That's the only thing that makes sense to me after people likes the curves and swoops of 2018 and 2019's flagship sets.
July 29, 2019 at 2:14 PM

Fuji said…
Dang it. I read this post about two weeks too late. I was teaching my students how to classify triangles and quadrilaterals. Never thought to bust out the piles of overproduced Topps inserts I've accumulated over the years and use them as examples.
July 29, 2019 at 6:37 PM

GCA said…
Can't say I hate it, but it is really close to the Bowman design. It's OK enough to be the last flagship set I do, especially if the inserts are as bland and unimaginative as the past several years.
August 12, 2019 at 11:46 AM