Joy of a team set, chapter 15 (tribute for the tribute) 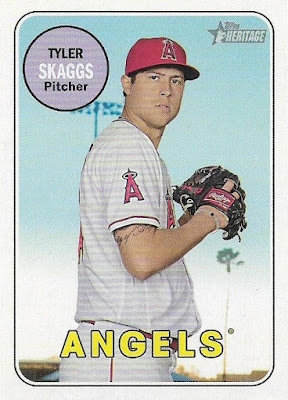 There are times when I wonder whether emotion supersedes talent -- something I know happens all the time on the high school and college level -- in major league games. You'd think that MLB players are so talented, so driven that emotion would never have a chance to determine a game's outcome.

Then you see something like last night's combined no-hitter immediately after honoring departed teammate Taylor Skaggs and you just know emotion had everything to do with it.

Thank goodness there are games like these. Sports is so plagued by hype and announcers, bloggers and fans screaming UNBELIEVABLE every 30 minutes that performances sometimes lose their meaning. Then a game like the Angels' game last night reminds you what "unbelievable" truly means. (Personally, I'd rather announcers yell "INCONCEIVABLE" every time they're amazed by something. It'd be a lot more fun).

I'm not an Angels fan. Far from it. I often dismiss the Angels (and the Padres) as wannabe Dodgers teams.

That 1979 Angels team was the first Angels team I knew of as good. And since they were upstarts, I rooted for them in that postseason series. They're still one of my favorite upstart playoff teams.

It's been 40 years since the Angels made the playoffs for the first time. I'd like to recognize that with a Joy of a Team Set episode.

Here are your 1979 Topps California Angels: 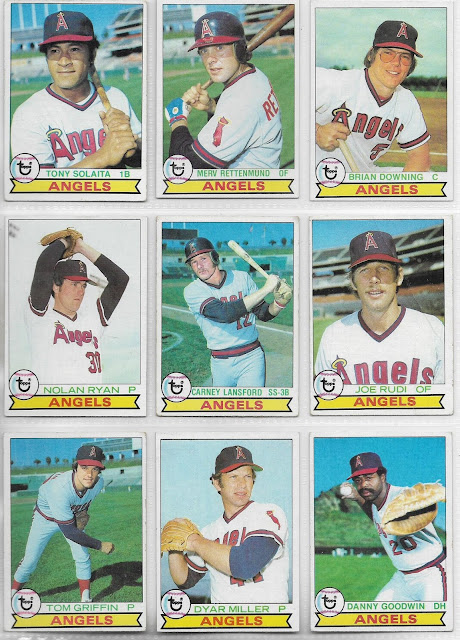 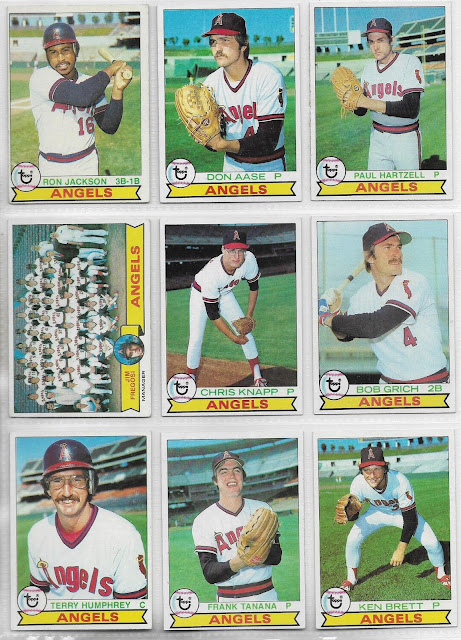 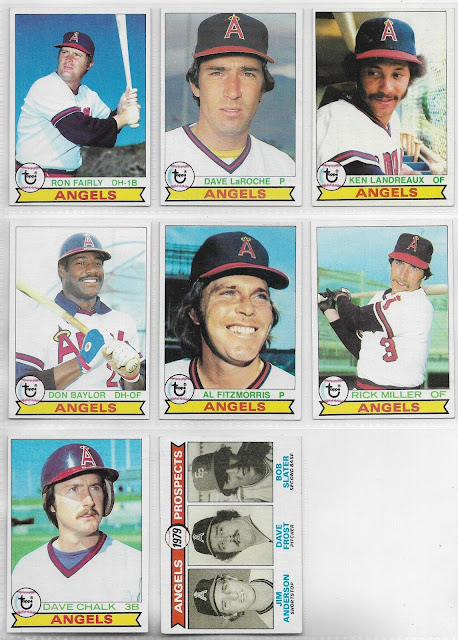 I've always enjoyed the Angels cards in the 1979 Topps set because it's one of the few teams that received design colors that matched their team colors, although it wasn't in the typical way. Yellow, which matches the halos on the Angels' jersey and hats, is the dominant color, followed by red.

The banner color scheme is also used on the league leaders cards that start the 1979 set. And there's an Angel on one of those, too. 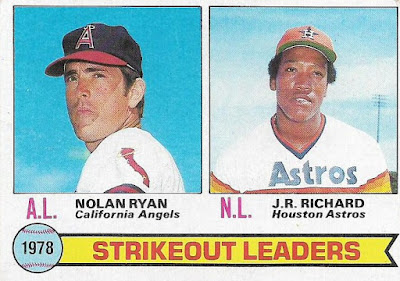 Nolan Ryan appears three times in the '79 set. Here he is again: 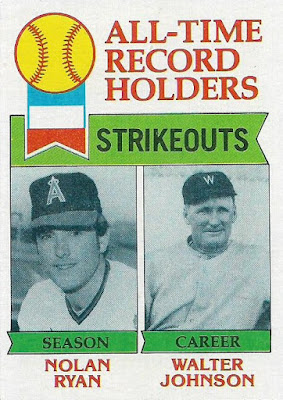 OK, now it's time for the traditional rundown through the team set: 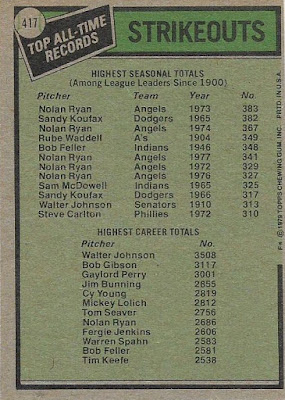 It's always fun going back in time and viewing the all-time leaders from that period.

Nolan Ryan and Sandy Koufax are still 1-2 for the single-season totals, but Randy Johnson has invaded spots 3, 5, 8 and 10, knocking Nolan Ryan's 1977 total of 341 to ninth. Besides Waddell and Feller, everyone else has fallen off the top 10.

The career list is completely different. Nolan Ryan now leads with 5,714. Walter Johnson has dropped all the way to ninth. A number of pitchers in the current top 10 -- Steve Carlton, Bert Blyleven, Tom Seaver, Don Sutton and Gaylord Perry -- were still in the middle of their careers when this card was issued. Randy Johnson is second (4,875) and Greg Maddux is 10th (3,371).

With the way players are striking out these days, I expect this list to change drastically. Justin Verlander already would easily dent the 1979 career strikeout list and Clayton Kershaw is hovering just outside of it.

Team's claim to fame: The '79 Angels were the first team in franchise history to make the postseason. They lost to the Orioles in the ALCS.

Key players on the '79 team missing from the '79 set: Rod Carew, Willie Aikens, Dan Ford, Mark Clear. They would all appear as Angels in the 1980 Topps set. 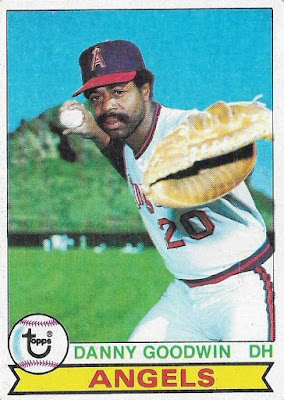 Famous error cards: Unless it's Bump Wills there are very few notable errors in the 1979 set.

Most sickly card in the set: 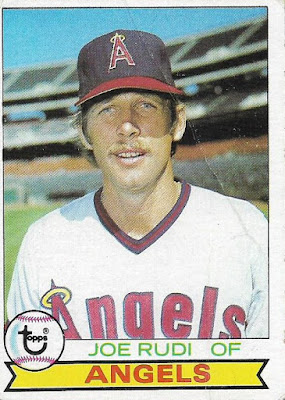 My Joe Rudi card has had a crease traveling from the top of the card in a southeast direction. It's been like that since '79. Maybe I should do something about it.

Players I've talked to: None. 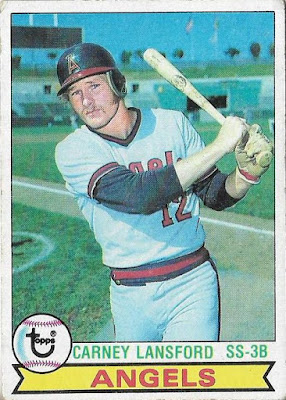 I loved this card. See how well-handled it is. Carney Lansford finished third in the AL Rookie of the Year voting in 1978 and this is his rookie card. It's remains one of the best rookie cards in the set for me (that and Bob Welch). Ozzie Smith who?

Favorite card in the set: 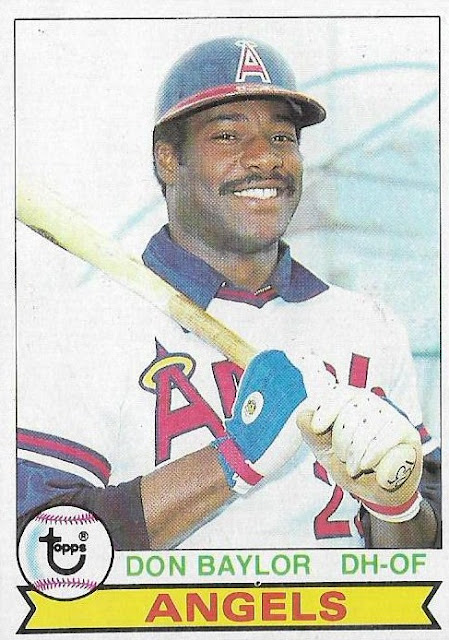 But my tribute is over. I'm back to rooting against the Angels tonight.

Fuji said…
Carney has a great looking rookie card. Love the posed action shot. And it's like the baseball card gods knew that he'd end up spending the bulk of his career at the Oakland Coliseum.

As for the no-hitter... it's truly one of the coolest stories. I remember when Dee Gordon hit that home run on the night they honored Jose Fernandez. That was pretty awesome. I thought how cool would it be to hit a home run to honor my friend. That was one swing in one at bat. Not taking anything away from Gordon... but that no-hitter was on the next level. I totally see what you mean when you wrote "Sports is so plagued by hype and announcers, bloggers and fans screaming UNBELIEVABLE every 30 minutes that performances sometimes lose their meaning." You're not wrong. I'm one of those guys who tend to get excited about even the small things. But I'm also able to sit back and realize that some events are bigger than others.
July 14, 2019 at 10:33 AM

Jafronius said…
Someone on the radio said that until that night, the last combined no hitter in California just happened to be on Tyler Skaggs' birthdate. Baseball's cool like that.
July 14, 2019 at 11:21 AM

Brett Alan said…
One of the most famous bits of poker announcing (to the extent that poker announcing is ever famous) is Norman Chad saying of Chris Moneymaker’s amazing run, “This is not just fairy tale, it’s inconceivable!”
July 15, 2019 at 4:56 PM