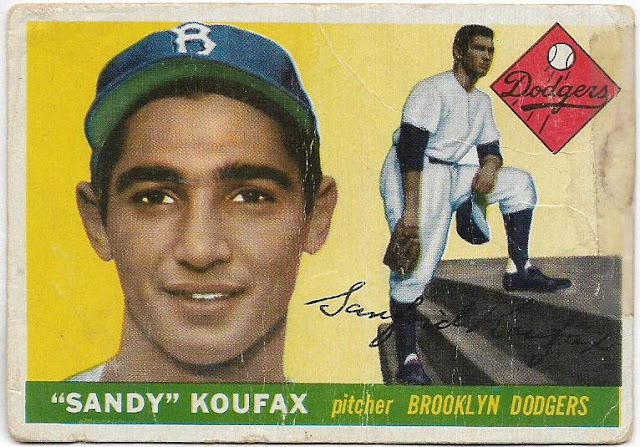 I thought this would be my entry into It's Like Having My Own Card Shop's 10th anniversary contest, but I read the category wrong.

But I've already got this post written in my head, so that's what I will do now.

The above card is the best card in my collection at this very moment.

"Of course it is!" you say. It's Sandy Koufax's rookie card!

Yes, I know. But there's so much more to it than that.

First of all, I traded for this card in high school. It is the single greatest trade of the first half of my life if not ever. I can't even remember what I traded to get this card, nor am I entirely sure who traded me the card. But there's a chance that the person who traded it to me, unless he had another Koufax rookie in stock, regrets dealing a '55 Koufax.

That's because the cheapest Koufax rookie I can find online currently is north of $200. That would be more than I've ever spent on a single baseball card and that $200 is for a Koufax rookie in basically the same shape as the above card.

But let's discuss the fabulous shape of that Koufax rookie!

Because the corners are rounded, because it is creased seven different ways from top to bottom, because there is pen-scratch in the upper left border and a big swatch of tape covering up a significant tear on the right side, I don't have to worry about it!

There is no protection of my investment. When I take it out of it's very average top-loader -- for example to scan it for this post -- I don't handle it as if it's dynamite. I can drop it on the floor three times in a row. There isn't a care in the world when it's out in the open. What am I going to do to it? Add an eighth crease?

What a relief that is for a card so formidable!

Also, the card is basically intact (thanks, tape!). The cheapest Koufax rookies you can find online have some portion of the card missing.

Finally, and this is very important in my current collecting stage, I do not need to pursue a Sandy Koufax rookie!

My collecting goals at this point are mostly related to vintage: sets and Dodgers. I would like to have all the 1950s Dodgers as unrealistic as that sounds. But money is tight and I don't see it loosening for quite a while. That doesn't match up with my goals of getting vintage '50s Dodgers at all.

The price of Koufax cards has been growing for the last decade or more. He is considered more of an icon than he was 25 years ago or when I traded for the card in high school. Many more people want Koufax cards than they did in 1982. Many more people want rookie cards than they did in 1982. And who knows what people are doing to Koufax rookies these days -- trimming, counterfeiting, grading. But I don't have to deal with any of that! Because one of the most crucial cards in Dodgerville, a card at the crux of my collection, has been in my collection for decades!

And that is why this card, in this condition, is the best card in my collection.

It's the result of probably the best decision I ever made in high school.

night owl said…
No, it wasn't that. I didn't have a Ripken rookie at that point, and nobody would have wanted a Ripken card that badly at that time to deal it for Koufax rookie. I'm sure I traded something vintage in nature.
July 22, 2019 at 9:48 PM

Fuji said…
Sweet card! The Koufax rookie card has never even popped up on my radar. Way outta my league. I'm even struggling to find an affordable copy of his 56T card. Keeping my fingers crossed though.
July 22, 2019 at 11:58 PM

Mike the History Teacher said…
Two of my favorite cards in my collection are a '58 Mantle All-Star and a '66 Koufax. I bought the Mantle from a card shop's junk box when I was in high school, and the Koufax came from a card show in the late '80s or early '90s.

These were no investments either. The Mantle has a one-inch tear, and the Koufax has a horizontal crease where someone once folded it literally in half. I think I paid a dollar for each card.

But I have a Mantle from the nineteen FIFTIES and a Koufax from the pinnacle (and twilight) of his career.

Like Old Cards says above, who cares about investment?

These cards were well loved by someone long before they found a home in my collection. If only cards could talk, these two could probably tell some great stories.
July 23, 2019 at 2:34 AM

Jonathan said…
Absolutely! My 58 Ted Williams looks like it went through a washing machine but its mine and I can touch it.
July 23, 2019 at 4:22 AM

Jim from Downingtown said…
Oh, you want to talk about a beat card? Check out my 1965 Deron Johnson. I got this (and Stan Williams) during 1967 when I first started collecting cards.

Where did these 2 come from? I dunno, they just showed up one day among all my 1967 cards. You know how when you pull a handful of coins out of your pocket (or a jar) and sometimes there's a washer or a button among all the coins? Yeah, THAT!
July 23, 2019 at 3:42 PM

Unknown said…
old cards is correct, we are collectors. i also dont mind cards in this condition, and i have accumulated quite a collection. it is what gives me joy.
July 28, 2019 at 8:52 AM