No reason to hang on to this card

December 05, 2016
I apologize if I'm writing about my confusion over and over again, but sometimes it takes a couple of posts for me to get it.

Yesterday, I was digging up some cards for a handful of card packages that went out this afternoon. Most of it was set-collecting stuff, so I was whipping through the backs of cards staring at number after number, barely looking at the fronts. It's time-consuming, but I don't mind at all.

As I shuffled through some 2015 Topps doubles down in the basement, I came up with a few needs for others and I brought them upstairs and put them on the desk.

It was only then that I realized a particular card that I had in the tiny stack. 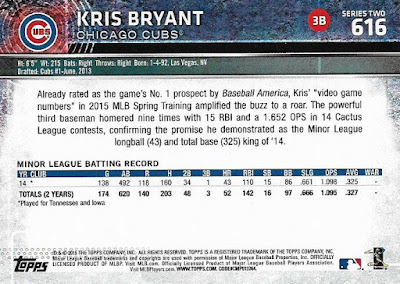 OMG, it's the young king of the World Champions! The third base talent who (*gasp*) smiled as he prepared to record the final out of the World Series! 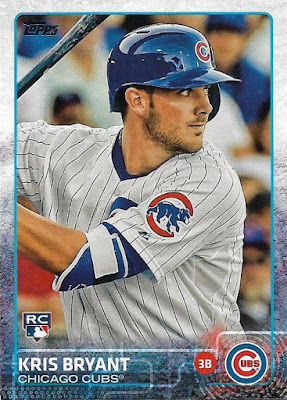 This is Kris Bryant's base card from 2015 Topps, Series 2. I was a little surprised the person whose want list I was looking at didn't have the card already, given circumstances I won't reveal so the person receiving it is at least slightly surprised by its arrival.

The fact that he didn't have it set off my curiosity, and since I don't sell cards, I decided to look up the going rate for this card.

Heading over to COMC, here are the prices:

And one trip to Sportlots:

I admit I was kind of stunned. I didn't know such a frenzy was going on under my nose in the hobby. This is a base card, right?

This can only be one thing. It is sellers capitalizing on the demand for a young World Series champion on a team that hadn't won a title in a century, even though this card has got to be as plentiful as any other card in the set. That is one thing that still blows my mind about card purchasers -- how a price can skyrocket for a card that was made in equal numbers to every other card, a card just as plentiful as any other. And yet people must buy it. I get everything about "supply and demand" but this always seemed weird to me.

I don't know how I ended up with my version of Bryant's #616 card, but I'm glad it landed in my collection before the 2016 World Series.

I have sympathy for those who are still looking for it to complete their 2015 set. It shouldn't be that difficult. They shouldn't have to pay $12 for a regular base card.

So I took the card of Bryant, put it in the stack with all the other cards I was sending, and shipped it off, treating it as nothing more special than any other card in the package. Because really, it isn't.

I had a #616 card of Kris Bryant. There is no reason to hang on to another one.

If I needed the cash, sure, I'd give selling a try. But I'd feel a little weird doing it. In my brain I'd be thinking "this card can't be more than a dollar!"

But that's the hobby sometimes. It's strange and weird and wonderful.

Johnnys Trading Spot said…
That Bryant has carried that price for awhile now.
December 5, 2016 at 7:51 PM

Robert said…
When I first started blogging, the 2010 Topps Buster Posey RC was my version of the Kris Bryant. It sat as my final card I needed to complete the set for quite a while because of the price tag. Someone was finally gracious enough to send it my way.

P-town Tom said…
Trying being a Cub team collector. I wish the dealers in my area had your mindset of "this card can't be more than a dollar!"
December 5, 2016 at 9:02 PM

BobWalkthePlank said…
I always laugh when this happens. Jeter had several cards like this over the years. Sorry Cub friends.....
December 6, 2016 at 8:37 AM

GCA said…
I'm not sure you can assume that stars or rookies like this aren't a little short printed. I am always ending up with the last few singles I need for the set being Jeter, Bryant, Trout, or any of five or six phenom rookies. Even though I might buy a couple hobby boxes, or just several retail packs or blasters, there are almost always big names left to find.
December 6, 2016 at 10:08 AM

Fuji said…
In a weird way... I'm kind of glad that this card (and any other base set rookie card) still commands money. It reminds me of the days when people actually paid $50 for Canseco and Mattingly rookie cards.
December 7, 2016 at 1:24 PM

Defenders50 said…
Two to three years later, and the price is still pretty much the same, which explains why it's the sole holdout for my 2015 Flagship completion project.
November 19, 2018 at 5:22 PM