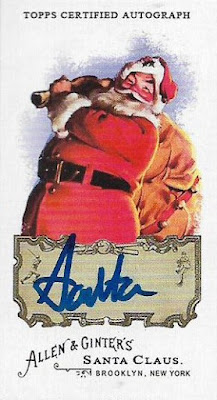 Christmas greetings, you few folks reading blogs during this festive time of year.

Over the last week I've shown nothing but cards I did git. I feel just a wee regretful about that, but not enough not to show even more cards I BEEN GITTING. TIS THE SEASON OF GITTIN'!!!!!

(Those are the words of a person confident there will be no coal in his stocking, because there are no stockings hung up this year!)

Anyway, I found enough cash left over from shopping for others to squeeze in one small COMC order for myself. It's not close to the size of my Secret Santa package from Wes. It's just a few cards, that are just my speed, because I know exactly what I want. 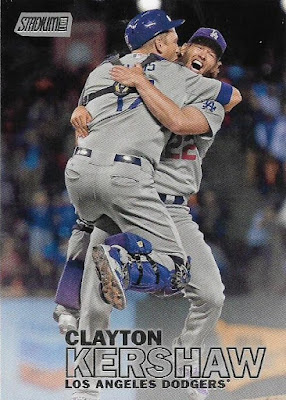 The last 2016 Stadium Club Dodger base card that I needed. This IS a merry Christmas. Look how happy Clayton is. Sure his cohort is now a Marlin and as Jerry Seinfeld once said, "that's not going to be good for anybody," but this is all about capturing the moment. And the moment is: I finally got this card! 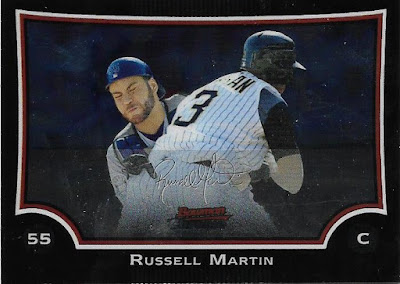 The final 2009 Bowman Chrome Dodger card I needed. Yeah, 2009. I think I will be trying to erase Dodger wants from more recent sets in the next year or so. I can say that until Vintage comes knocking at my door. Then I'll be at Old and Moldie's beck and call. 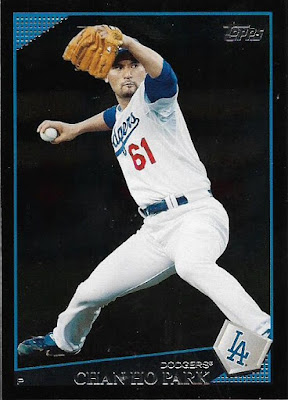 More 2009. I thought I was so on top of things in 2009. But I gave up on stuff then, too. Remember the Walmart black-out cards? There's a post somewhere on this blog where I said they were made just for me. But then I forgot about them. This card isn't even from the difficult Series 2. Just a regular old Series 1 card of Chan Ho Park pitching in pitch black. 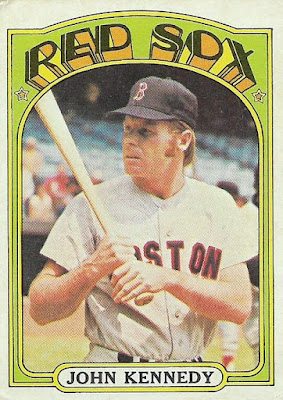 Wooooooooooooo! Seventy-twoooooooooooooooooooooooo!!!! Whittling off the final few wants in this set. I received a John Kennedy card earlier from someone, but there's a hole punch in it, and I wince every time I picture a kid taking a hole-puncher to a card. Shove it in your pocket, sure. Manhandle it so it doesn't have corners, go to it, son. But using instruments? I believe that's where I draw the line.

Anyway, if you're not as squeamish about hole-punched cards and need it for the set, I have one. 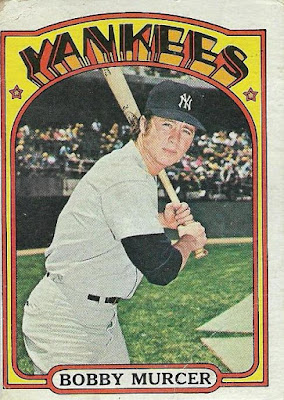 I panicked a little with this card. When I came back from the card show in Syracuse in September, I mentioned that the dealer I frequent pulled out a brand new box full of the entire 1972 Topps set. Everything. Super high numbers. Everything!

And then he said: "Except the Bobby Murcer. I don't have that."

"Except Bobby Murcer?" Is this some super difficult card to find that everyone knows as legend besides me? My usual paranoia was spiking. It's bothered me since the dealer said that.

So, now I have the Murcer. It was unjustifiably listed as "poor". It's certainly not in optimum shape, but I'd never call it "poor" and I'd be quite happy with it joining my other '72s. And that dealer's words won't be in my nightmares anymore! 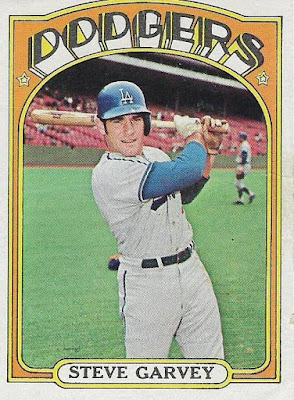 Ah, yes, The Garv. The card that I bought at one of my first card shows, the first double-digit-costing card that I ever purchased. It's been nestled in various binders over the years ever since the early 1980s, whispering sweet nothings in my ear along the lines of "aren't you happy you don't have to buy me ever again?"

And then I decided to complete the 1972 Topps set. And I decided that I couldn't take the Garv from my Dodger collection and insert it into my '72 collection. I needed TWO of them. Sure, you understand, but saying it out loud to regular people, you suddenly become aware of how crazy it sounds.

With this card, I'm down to three 1972 cards for the complete set:

I should have no problem getting those in the new year.

OK, now back to your Christmas Eve doings. Stay away from the egg nog.

I shall be back next week with some posts that aren't about gitting. .... Unless I git cards for Christmas.

Mark Hoyle said…
Goodluck with the final three. I had to buy two of the Rose IA. Because there is a Yaz puzzle piece I needed
December 24, 2016 at 7:09 PM

Jim from Downingtown said…
As I saw the top of Garvey's 1972 card slowly scroll up into my view, I remembered that the Bill Russell card was the only 1972 card I didn't get in '72.

steelehere said…
Merry Christmas. Steve Garvey had his 68th birthday the other day. I can't believe how time flies.
December 24, 2016 at 11:26 PM

Greg Zakwin said…
The Murcer is incredibly tough, yes. Congrats on landing it and the Garvey!
December 26, 2016 at 3:57 AM

Fuji said…
Hope you and your family had a merry Christmas! I completely understand the extra Garvey thing. I picked up a 1983 Fleer Gwynn recently... even though I already have one sitting in my set. My Gwynn binder just didn't look right without it.
December 26, 2016 at 11:07 AM