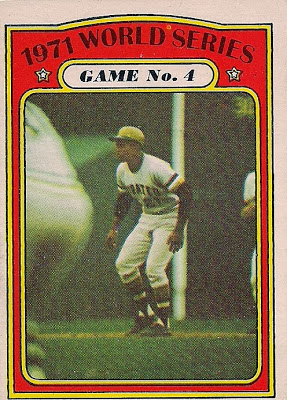 Since this is the 200th Awesome Night Card post, I feel obligated to do something special. But I don't have any time today for anything extravagant so this will have to pass for "special." It's special to me anyway.

This card shows the fourth game of the 1971 World Series between the Pirates and Orioles. It's the O-Pee-Chee version of the Topps card, not that you can tell the difference from the front of the card.

The fourth game of the '71 World Series was also the first night game in World Series history. It is a momentous occasion in night game annals and for people like me who collect night cards.

But the question is: is this actually a night card?

Does the photo of Roberto Clemente come from that Game 4?

I looked up Game 4 of the '71 Series, and best I can tell, the photo does come from that game.

The angle that the photo was taken from threw me off at first. But after some inner debate (boy, do I have a lot of those), I determined that Clemente is leading off of third base. You can see the left field foul pole line in the background.

But off of third? Yes there is.

So, I went to work and found this:

In the bottom of the third inning of Game 4, with the Pirates trailing 3-2, Clemente singles with one out, sending Richie Hebner, who had singled, to second base. Willie Stargell then flies out for the second out. But then Al Oliver comes up and delivers a base hit that scores Hebner and sends Clemente to third base.

So, the best that I can determine, the big butt in the foreground is that of Al Oliver.

It's difficult to read the number on the back of big butt's uniform. Oliver's number then was 16 and it could be a 16 there. I took an extra look at the Pirates' roster because the second number on the uniform looks more straight than curved. But No. 11 for the Pirates that year was infielder Jose Pagan and No. 17 was pitcher Dock Ellis. Neither played in Game 4 of the '71 World Series. And neither was in a situation for the whole series in which they were on base with Clemente.

There is another point in the game in which Clemente reached third. In the fifth inning, Stargell singled, sending Clemente to third base. But Stargell's uniform number was 8, and that ain't an 8 on the back of big butt's uni.

That means I'm saying it's that play in the bottom of the third inning in which Oliver drove in Hebner and tied the game at 3-3.

(Go ahead and prove me wrong, but if you do that means you have more time than me and then the guilt will torment you about all the other things you could be doing instead of trying to prove poor little night owl wrong about a card that he loves so much).

This was a pivotal moment in the Series. The Orioles had won the first two games, followed by a victory by Pittsburgh in Game 3. The Pirates would go on to win Game 4 and tie up the series, eventually winning in seven games.

So this is a key photo of a key moment of a historical World Series featuring the legendary Roberto Clemente. All at night.

So, yeah, I guess this card is worthy of a hero number like 200.

gcrl said…
i won't spend any time (i don't need any guilt), but i will say that i still see clemente leading off from second base. the location of the foul pole is what gives it away to me. if he were at third base, the foul pole wouldn't be noticeable from this angle (assuming it is taken as you suggest from first base). for the foul pole to be behind him like that, the photo would have to be taken down the third base line from home plate, in which case clemente would be looking into the dugout. still a great card.
December 7, 2013 at 11:31 PM

Anonymous said…
I've got to agree with gcrl - it really seems like he's leading from 2nd base. I think so because of the angle he's looking toward home plate - it seems like he'd be turned differently, and if the picture is taken from first, he would be to the left of "ole big butt" if he was on third.

Anonymous said…
the one thing that makes me think it is from the game it claims - if you look at the card for game #6 from that set - it's Frank Robinson sliding into home plate, clearly beating a throw. This was the last play of that game, a walk-off sacrifice fly. So if that card is from the right game, it stands to reason that the other cards are as well. 2013 Topps wouldn't care to get it right- 1972 topps, maybe they would.
December 8, 2013 at 1:42 AM

night owl said…
There is not a time in Game 4 where Clemente was at second base. He went from first to third on a single twice. In his other at-bats, he struck out, walked and was stranded, singled and was stranded. It's possible that he paused at second on one of his trips from first to third and then reached third safely. But otherwise, Clemente is either at third base or that's a photo of a different game.
December 8, 2013 at 3:44 AM

I'm sorry, but if you're going to make frequent references to big butts, I have no choice but to quote Pee Wee Herman.
December 8, 2013 at 9:41 AM