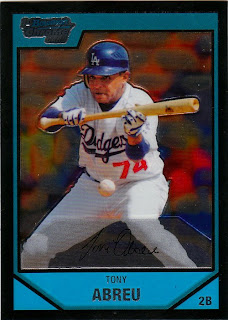 Steve, from one of the finest card blogs around, White Sox Cards, and I recently completed a team trade of Sox for Dodgers. He's already posted about the White Sox he received. Now it's my turn to post the Dodgers.

The White Sox and the Dodgers have a bit of a history, being two of the older franchises in baseball. There's the bad: the White Sox still getting lots of use out of former Dodger prospect Paul Konerko. There's the good: that 1959 World Series when the Dodgers beat the White Sox for the championship. (I have interviewed a member of that '59 White Sox team, but as my aunt likes to say all the time, "We're not talking about that right now.")

I've always liked the White Sox. Out of the AL playoff teams, they're the ones I wanted to make the Series. I much prefer them to that other Chicago franchise for several reasons. The White Sox and their fans just seem a bit more real than the Cubs and their cuddly sun-worshippers. Add the fact that the media have turned the Cubs into some sort of tragic figure, and any sympathy I had for that whole 1908 thing (which wasn't a lot) has evaporated. 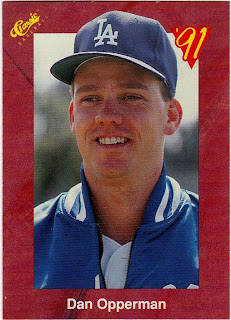 My first card of Dan Opperman! Who is Dan Opperman you ask? Well, I asked too, because I hadn't heard of him either. Opperman never made it to the major leagues. It appears his last minor league season was 1992. 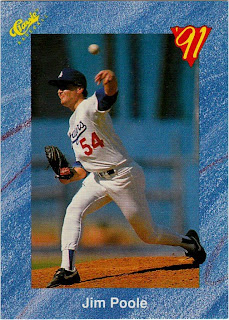 I'm assuming this card is also a Classic Games card. Jim Poole played for a surprisingly long time (left-handed relievers are always in demand). He started out with the Dodgers and ended up playing for eight teams. 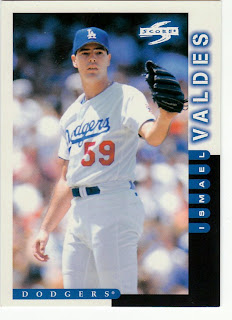 Here is my first card of Ismael Valdez, who shockingly lasted seven years for the Dodgers before moving on to other teams. I had a hate-hate relationship with Valdez. I dreaded every start he made. Each time the pitching matchups appeared in the paper, I couldn't believe the Dodgers were starting him again. Looking back at his career, I'm stunned that he went 15-7 in 1996. I don't remember such efficiency from Ismael at all. Ismael is also a Mitchell Report guy. 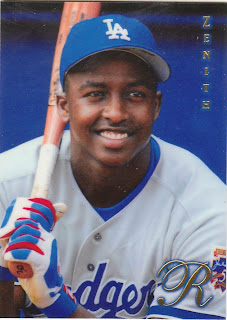 This card is kind of shy. It wants to curl up in a little ball. But it has nothing to be ashamed of. It sure is a fancy, glossy card. Pinnacle Zenith and a bunch of other card brands were giving Vladimir Guerrero's older brother all kinds of love in the mid-1990s. He was pretty much a bust, and he corked his bat, too. 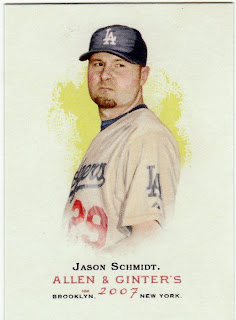 Jason Schmidt, 2007 Topps Allen & Ginter. Steve was nice enough to include a short-print card. Schmidt's been a short print in the A&G series each of the last two years. I don't know why. Seems like being a short print should be a privilege, not a right. Schmidt hasn't earned that privilege. 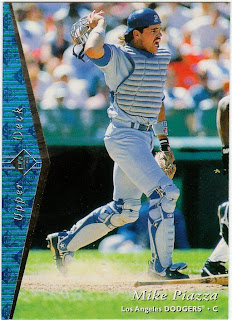 Mike Piazza, 1995 Upper Deck SP. I wish you could tell how shiny that blue triangle on the left is. But you probably already know. 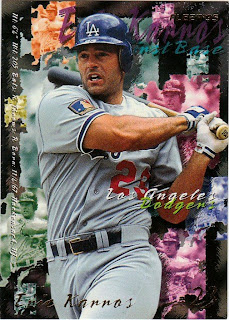 Eric Karros, 1995 Fleer. Hee-hee. I actually LOL'd when I saw this card. Could there be more going on here? I counted 10 pictures of Karros. That and the goofy sideways type down the left side gives the card that ESPN-the-Magazine-we're-trying-WAY-too-hard-to-be-cool look to it. 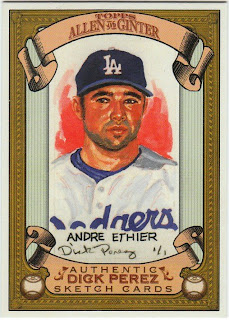 Andre Either, 2007 Allen & Ginter Dick Perez sketch card. A nice card indeed. I confess I don't have the same affection for Perez cards as others do. When Perez drawings first appeared on cards in the early 1980s, my brothers and I looked at them, shrugged our shoulders, and put them in the farthest recesses of our shoeboxes. Even now, some of the Perez drawings make me wince. But he got this one right.
And so did Steve. Thanks a bunch. Go White Sox!

Andy said…
I was also surprised how long a career Jim Poole had when I recently posted his rookie card right here.
November 9, 2008 at 9:35 AM

capewood said…
I wasn't going to make a comment except that my secret word is an actual word! Parked.