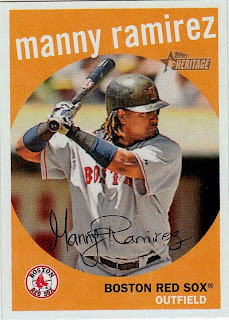 My card brand of choice in 2007 was Topps Heritage. Even though some of the photographs, based on the 1958 Topps design, alarmed me with their super-close shots ("That's not a good look," my wife said after seeing the Johnny Estrada card), I could really get behind some of them (Aaron Rowand has an awesome card).

So when 2008 Heritage came out, I was ready. I really liked the 1959 Topps design and couldn't wait to see modern players featured with that layout. When they hit the streets, I went on a Heritage buying spree. I was devoted. I was faithful.

A new girl moved into the neighborhood. She was very pretty, with a classic beauty. She was athletic and alluring. She looked fabulous. I asked her name. I'm pretty sure she said, "Allen Ginter," which seemed a bit odd. I dismissed it as having heard wrong. Must've meant "Allie Ginter," I thought.

Allie was fantastic because not only did she look great, but she was devastatingly smart. She knew about everything. She knew her baseball, of course, which was all kinds of awesome. But she had so many other interests. She talked about dead philosophers (Nietzche), inventors (Bowie), space exploration (Pluto) and travel (the Grand Canyon). She'd discuss aviation one minute, Greek gods the next. 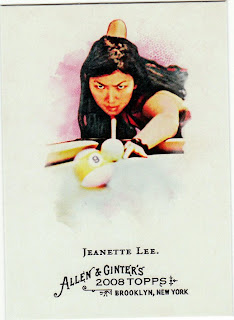 Maybe the best thing about Allie was she was never the same. She was always changing her look. Minis, black borders, silks. I was in love.

It's been months since I first saw Allie, but our love affair is hardly over, even as I'm arranging to acquire the last two "Allie" cards. But in the meantime, I've re-discovered my fondness for Heritage, thanks to some recent packages from some card bloggers. It's taken people from miles away to get me reacquainted with Heritage, my first love of 2008. Maybe that makes me a two-timing jerk, lusting after two card brands. I guess I'm a typical man.

Still, Chris, of Nachos Grande, deserves at least a small part of the blame. He sent me 19 Topps Heritage cards as part of recent trade. I sent him some "Allie" cards, as well as some Heritage. Chris added a few "Allies" himself (are you sick of me calling them "Allies" yet?), and a whole bunch of Dodgers, which he didn't have to do. I'll have to start lining up those Reds, Chris.

Among the Heritage cards that arrived Wednesday was the Manny card at the top of this post, as well as: 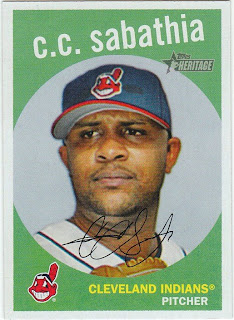 CC Sabathia. I'm really interested in seeing what he's going to do with that monstrous contract offer the Yankees plopped down in front of him. If he walks away from it, I will stop whatever I am doing, stand up and applaud. 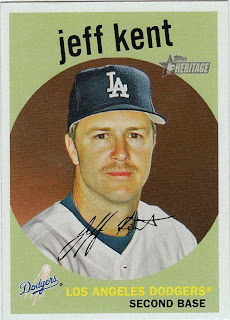 Jeff Kent. Everyone has players on their favorite team that they don't like, whether they'll admit it or not. Fortunately, I'm not going to have to worry about this one for much longer. I think. 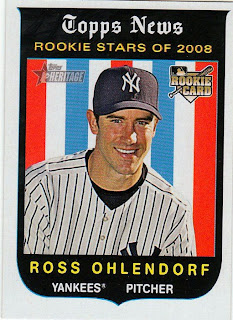 Ross Ohlendorf. Do you think Topps would've put him in so many sets if they knew he was going to end up with the Pirates? Hmmm.
Here are some of the other Dodgers that Nachos Grande sent: 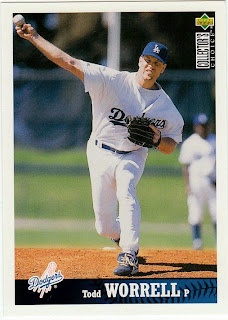 Todd Worrell, 1997 UD Collector's Choice. I always forget that Worrell closed for the Dodgers. 44 saves in 1996, huh? I think my memory is almost full on remembering every player and every stat. 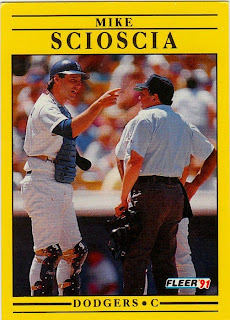 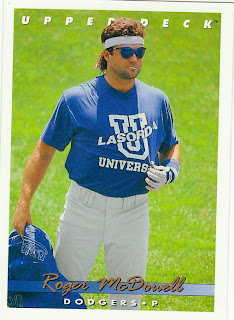 Roger McDowell, 1993 Upper Deck. A photographer sees his dream subject. Others see a cry for help. I never knew McDowell and Britney Spears had anything in common. 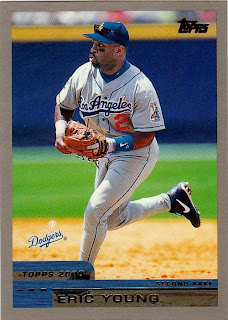 Eric Young, 2000 Topps. When Eric Young launched errant throws to first base into the stands, do you think he yelled out, "Souvenir City!" Just curious. 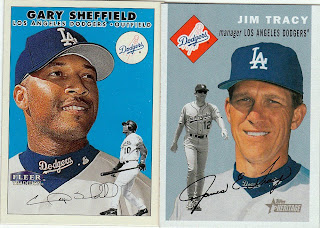 I know everyone was looking for a side-by-side comparison of 2000 Fleer Tradition and 2003 Topps Heritage, both rip-offs of the 1954 Topps design. Exactly how did Fleer get away with that? 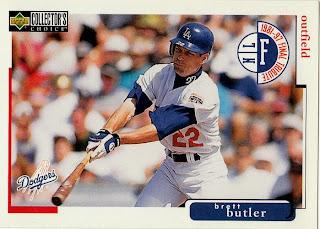 Brett Butler, 1998 UD Collector's Choice, Final Tribute. These Final Tribute cards are very cool if they're doing what I think they're doing. My friend has a major gripe with card companies not issuing cards of players who may have retired before the card set came out but still played in the preceding year (Hank Aaron not having a 1977 Topps card, for example). Butler's last year was 1997, so it's nice he has a '98 card. My friend will be very pleased about this.
Finally, one of my other "loves" is 1983 Topps. I hope to complete the best set ever issued in the 1980s one day. Here are two that Chris sent that I didn't have. 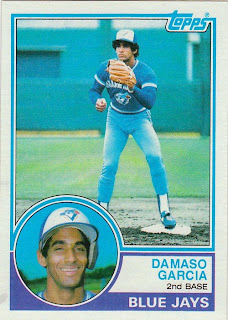 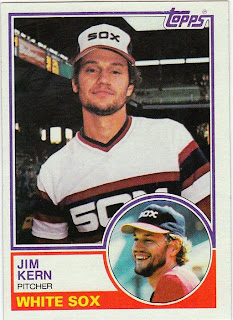 Many thanks, Nachos! Muy bueno!

Dave said…
Great post! I love Heritage too, and bought tons of it this spring. I'm still a few cards short of completing it but haven't paid much attention to it lately. I'm thinking that the High Numbers Series will bring it back to the forefront for me.

That '91 Fleer Scioscia card is awesome!

gcrl said…
ah! final tribute alert! i am heading straight to my 98 udcc to find this bugger.

madding said…
Well, as you've probably seen with my blog, I really love the Heritage. I am missing entirely too many cards to even bother with a want list at this point, but I still need them. I should probably buy a hobby box, but that means money... ugh.
November 16, 2008 at 5:52 AM

night owl said…
So many people still trying to complete their Heritage set!! And now the high numbers! It's the set that never ends!
November 16, 2008 at 10:31 AM

Nachos Grande said…
Glad you liked the cards! Thanks for the trade. I just posted my half of the trade on my own blog. As always, let me know if you want to work another swap out sometime! My want list is constantly evolving at: http://fanofreds.blogspot.com/2008/10/trades-my-needs-haves-list.html
November 16, 2008 at 4:30 PM