Something you can read during commercials 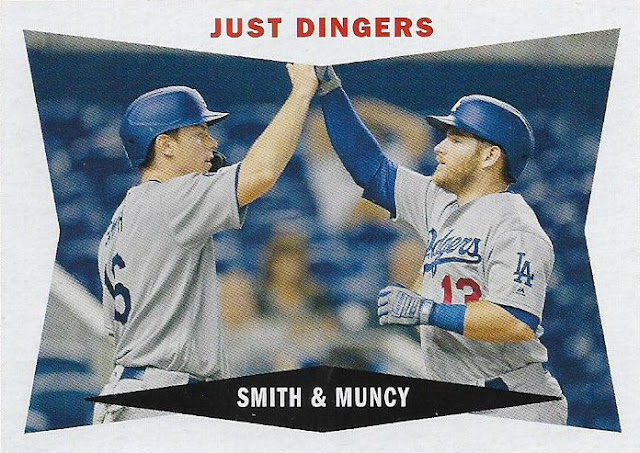 I don't expect many people to be reading blogs today. There are four baseball games taking place between 2 in the afternoon and approximately midnight.
Am I watching them? Of course not, I'm running the usual slave gauntlet of chores, errands and job responsibilities. Fake playoff set-ups involving fake playoff teams (the Padres and Marlins? Come on) are no match for standing in line at the post office only to leave that line because it's not moving at all and the lady at the front is apparently sending something so classified that the postal employee behind the counter has to quiz her about her eye and hair color among other things I AM NEVER ASKED AT THE POST OFFICE.
But those of you consuming ball do need something to stare at during the commercials. How many times can you listen to some business re-remind you about "uncertain times"? I've got your back with some baseball card images.
Recently, Nick of Dime Boxes and Jay of Card Hemorrhage (I just learned how to spell that word today), sent me an envelope each.
They each sent one card in common: 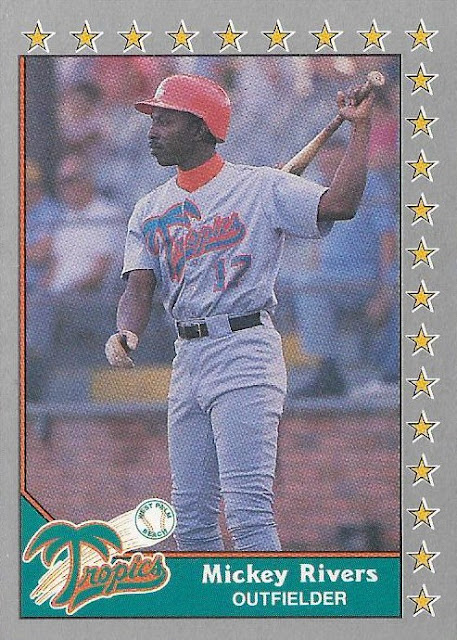 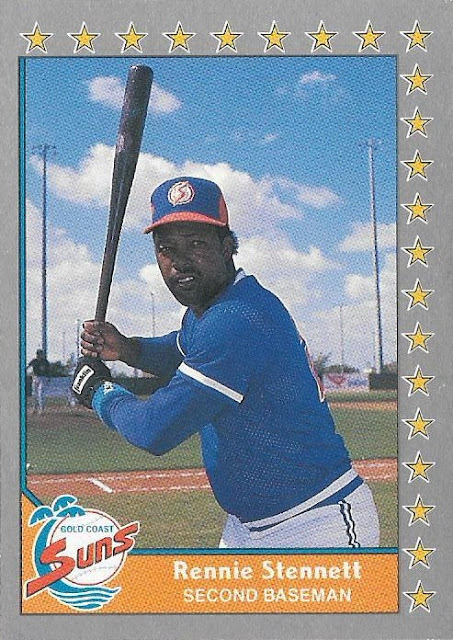 Both cards are from the 1989-90 Pacific Senior Professional Baseball Association set.
These Senior League sets are so marvelous because most of the players shown on them are major leaguers from when I was a kid. It is why I have completed one of the five known Senior League sets that were created at that time, and am only a handful of cards short of finishing another one.
I figured now would be the time -- yes, right when four games are happening involving current baseball players -- to rank sets featuring people who will never play baseball again in order by how much I like them.
Ready?
No?
OK, let's go: 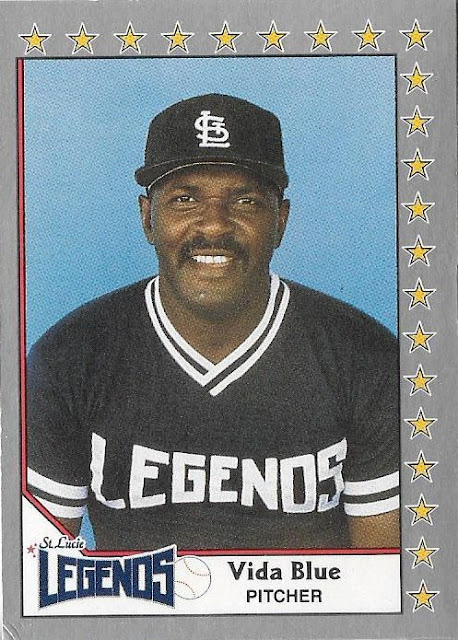 4. 1989-90 Pacific
I'm not ranking the 1990 Elite Senior League set because I don't have any cards from that one. It's not a bad looking set, kind of looks like early years Upper Deck.
But among the sets that I have cards from, 89-90 Pacific is at the bottom. Yeah, I don't mean to sound ungrateful for the 89-90 Pac cards I just received, but gray borders? And barely legible yellow stars on gray borders? (Trust me, you can see those yellow stars here only because I've embiggened the card and also because the whole internet is wonderfully backlit).
Vida Blue deserves something much more colorful. 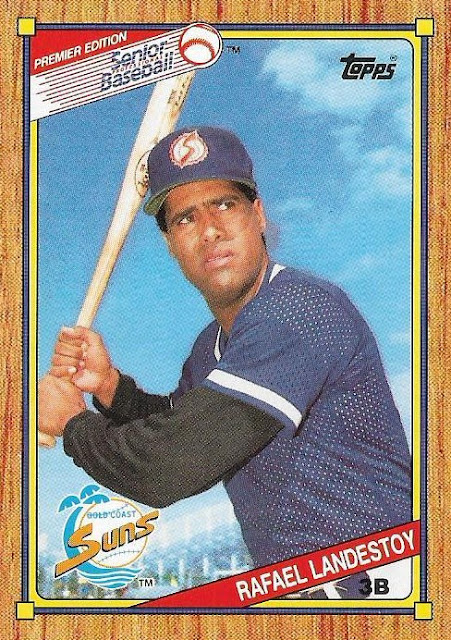 3. 1989-90 Topps
Leave it to Topps to trot out the wood borders again for its one-and-only Senior League set. Those borders lend a sense of legitimacy and laziness at the same time.
It's not a bad set when you look at the cards together but I'm so over wood borders that it barely registers. Which is why I have just this one card from the set. 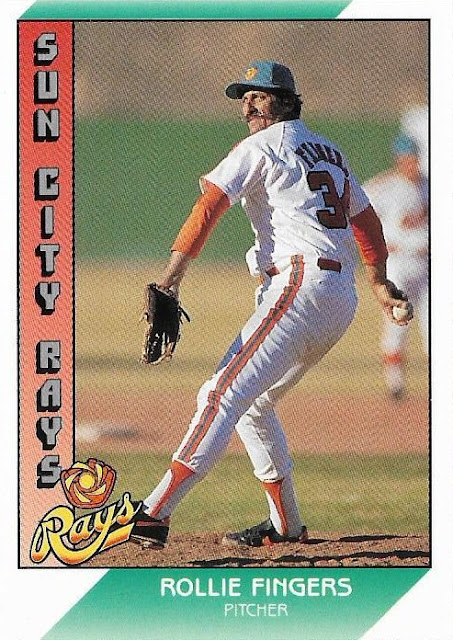 2. 1991 Pacific
You have to admire a set that came out after the league folded. I love this set for that single reason.
I also like it because it is bright and pastel just like Florida, which is where the league was based. Did anyone see any wood paneling on Miami Vice? No. Just a lot of oranges and aquas and flamingos and beach bodies. That's what this set reminds me of. I should finish off the few remaining wants soon. 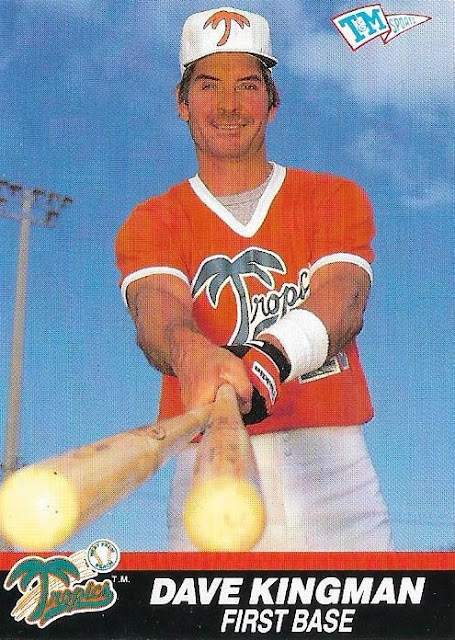 1. 1989-90 T&M Sports
T&M Sports FTW! Has T&M ever made any other major baseball card set? A quick search says that T&M also made a couple of strictly umpire sets at the same time and now I think this is my new favorite card company.
This is the only Senior League set that I've completed. I got all of the cards from Johnny's Trading Spot and A Cracked Bat. It's the best Senior set because the photos are nice and big and bright and a lot more fun than those on the other Senior sets.
So there you are.
Let's see some other cards that Nick and Jay sent before I go. 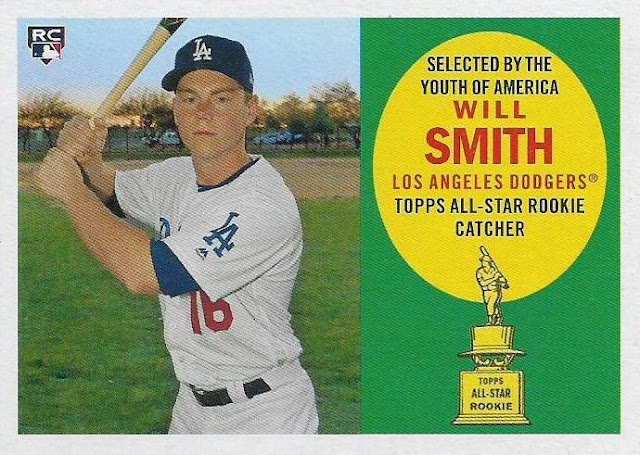 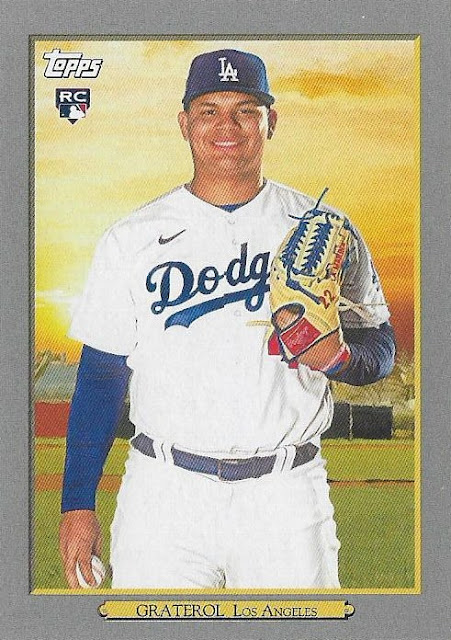 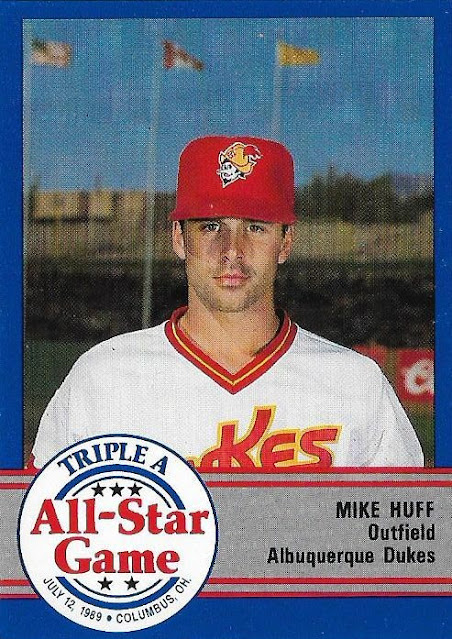 Those are a couple of very welcome 2020 Dodgers from Nick, along with an old Dukes player. 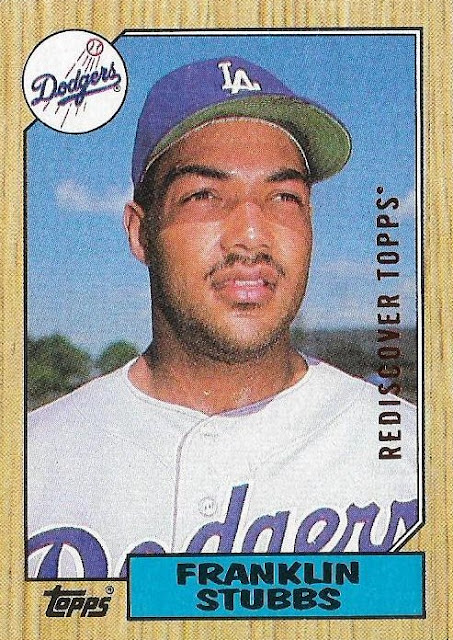 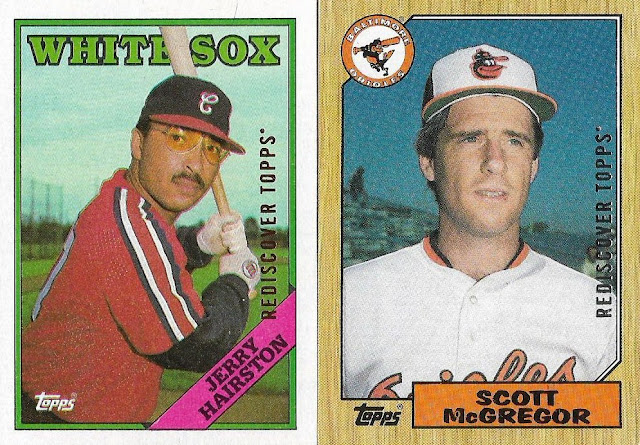 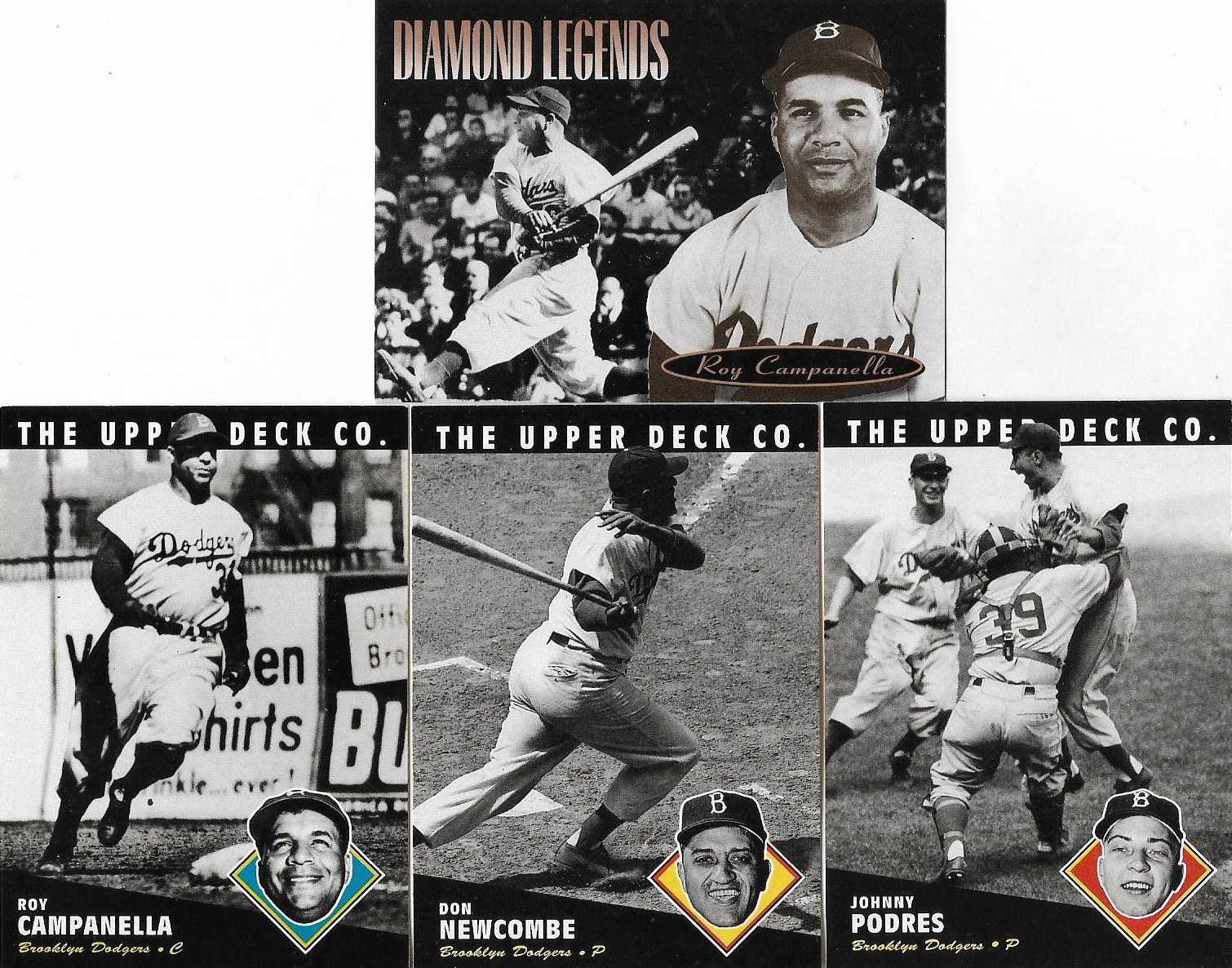 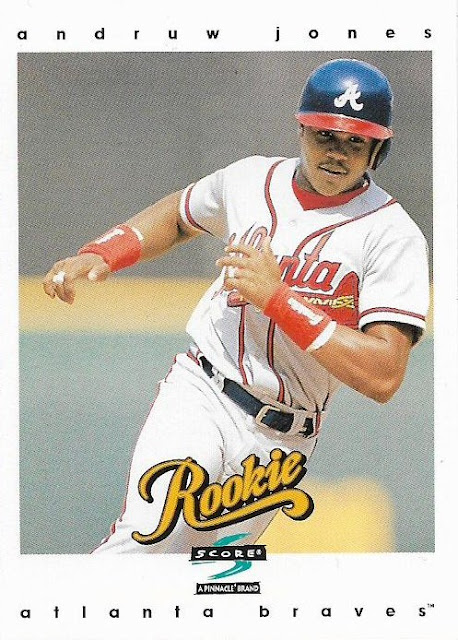 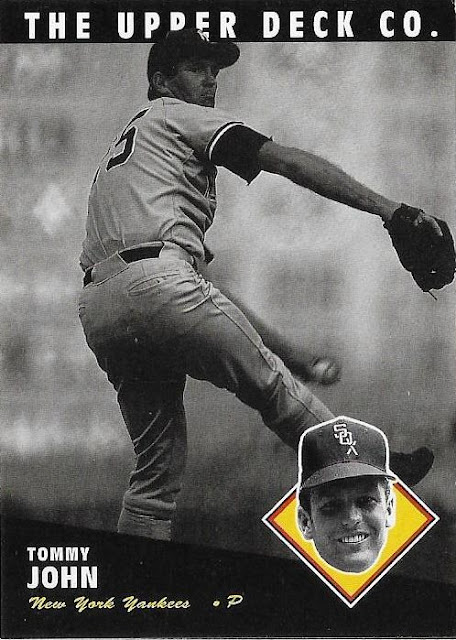 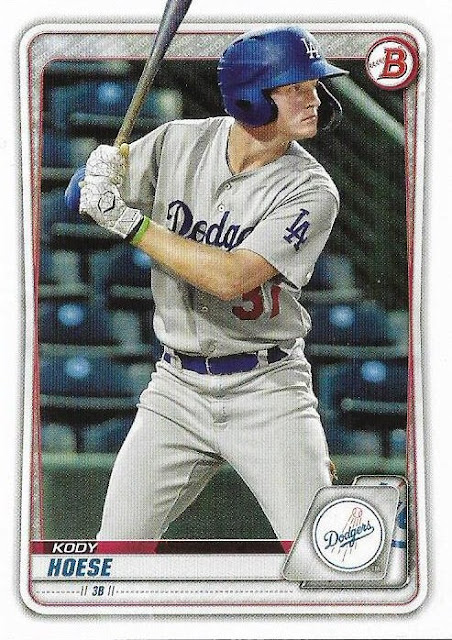 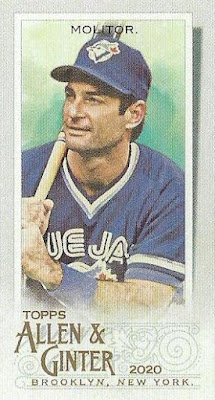 A wide selection from Jay. The buybacks, well, I'll take the Franklin Stubbs because it's a Dodger. I only collect 1975 Topps buybacks because I'm trying to save them. The others? They're just cards Topps ruined.
The Kody Hoese is a little more exciting. Just my third card of Hoese and looking forward to the day when the Dodgers have Kody and Corey on the left side of the infield and the squeals from the stands are deafening.
As for the rest: The Upper Deck Heroes Tommy John and those other Dodgers Heroes go to the never-mentioned bid to complete that set; the Paul Molitor ACTUALLY CRACKS MY A&G MINI FRANKENSET BINDER, it's ages since that happened; and the '97 Score Andruw Jones, well, I don't know why that's there -- to perpetuate the myth that Jones was never fat, hit .158 and spent all his money on strip clubs?
OK, you may return to whatever game you were watching. I hope the results are a little more pleasant than they've been going lately.

bbcardz said…
Just found this post during the half-hour break between the A's/Astros game and the Rays/Yankees game, both of which I'm only half-watching because I'm holding a contest on TCDb.

bryan was here said…
Alas, I only have but one Elite SPBL card in my collection, that would be the Tom Paciorek. It's a nice card. I wouldn't mind finding others. From what I gather, they had some pretty nice action shots. T&M did some nice cards, especially their umpire cards. They were all trying to get a piece of that MLB licence pie. I would have liked to see one of them get a MLB licence instead of Pacific.
October 6, 2020 at 8:49 PM

Chris said…
I get why you ranked the T & M set #1 but I'm on the fence about it. On the one hand it's an original design that doesn't evoke any other set. On the other hand, 1991 Pacific is sharp-though they used that design for all of their 1991 releases. I might be leaning toward Pacific because of the colors on that particular card, it's hard to say.

Boston had a chance to acquire Brustar Graterol and balked, which is why I'm certain he will be awesome. Karma immediately bit them as their pitching staff got wrecked one by one this "season".
October 6, 2020 at 9:00 PM

Fuji said…
Not watching any games right now. Was following the A's game during an 504 meeting earlier. And will follow along tonight's game as soon as it gets started.

Johnnys Trading Spot said…
The Braves game was GREAT. Especially when you compare with the wild card games.
October 6, 2020 at 9:32 PM

Nick Vossbrink said…
For whatever reason I have a near complete set of the Pacific set. (just missing the first 18 cards) It's a weird thing. I feel no desire to keep it or complete it but I also feel like I *should* complete it before I get rid of it.

Also, those Upper Deck Heroes cards are great. I went greyscale only on cards where I have black ad white images but the splash of color on the heads is a really nice touch that works way better than I ever expected it to.
October 6, 2020 at 11:14 PM

GTT said…
I bought the complete T&M set a while back for $6. It's a good set, but it bothers me that there aren't Senior League statistics on the back. I can't find the statistics anywhere online, which means that the cards are the only place I know of.
October 7, 2020 at 8:46 AM

Matt said…
If there is one true travesty to modern ballplayers making millions and millions of dollars, it's that there will probably never be another Senior League. The incentive for players just isn't there.
October 7, 2020 at 12:00 PM

acrackedbat said…
I still like that Kingman! PS I'm rooting for the Dodgers. If they can pull off a series win, perhaps it will take away some of the sting from 2017. I hope so. I have a Dodgers t-shirt and will be sporting it throughout October.
October 7, 2020 at 12:17 PM

Nick said…
Your Senior League list perfectly matches mine. I have more of the 89-90 Pacifics than any other Senior League set, but it's probably my least favorite design as well.