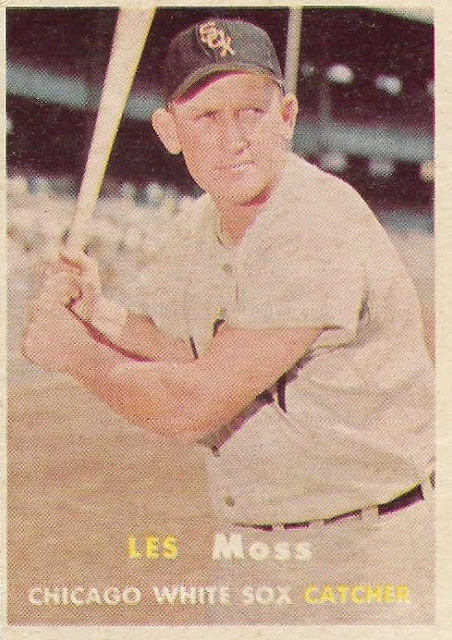 Ever since I converted our spare room into a card room more than a year ago, I've become more aware of the limitations of space on my collection.
When my cards were spread out in three or four different places throughout the house, I didn't think about it much. There always seemed to be more space -- if one spot was filling up, I could simply move it to another spot.
But now there is one room, albeit a wonderful, sizable room, and ... I'm running out of room.
There is no other place to put cards these days. They either fit in the card room or they need to be sent packing.
So I've started to think about downsizing somewhat.
A week or two ago I sent a bunch of 2006 Topps Barry Bonds Home Run History cards to Daniel of It's Like Having My Own Card Shop. He's trying to collect a card for every Barry Bonds home run.
Those Home Run History cards had been part of my quest to attempt to complete everything from 2006 Topps, a master set if you will. I was attempting to complete every insert set, every parallel, to mark the first modern set I collected upon my return to the hobby. Those Bonds cards had been part of that quest for 14 years.
Yeah, I didn't like Bonds at all and I don't like the Giants, so it barely made sense. But it was part of the master plan, I told myself.
I am now realizing I can't do stuff like that anymore. The limitations of my card room require that I collect only what I really like and a card commemorating every Bonds home run ain't it.
So I shipped them off to someone who could use them.
I plan to do more stuff like that as I come across cards that don't really fit in my collection.
Here is another example and I'm going to turn it into a giveaway: 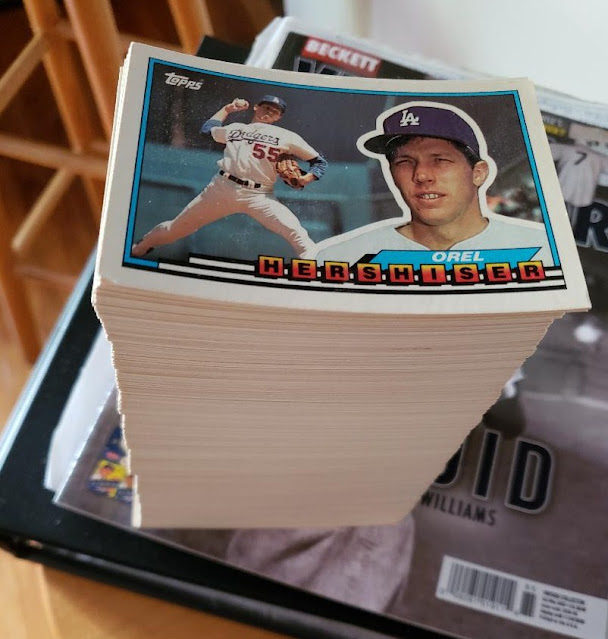 This is a complete set of 1989 Topps Big, 330 cards worth.
It was a surprise gift from reader Jonathan, sent very shortly after he sent a bunch of other goodies.
It's pretty cool, and I actually do have pages to fit those cards. But it's not something I am interested in saving. The Topps Big sets are modeled after one of my all-time favorite sets, 1956 Topps, same size and everything. They're OK. But they can't match the real thing.
So I'm offering up the whole batch in a giveaway. The cards are in brand-new shape, pretty much fresh out of the box. I did upgrade a couple of Dodgers with the cards, so the Mike Marshall in the set has a small crease and the Franklin Stubbs has a corner nick. Everything else is in immaculate condition. 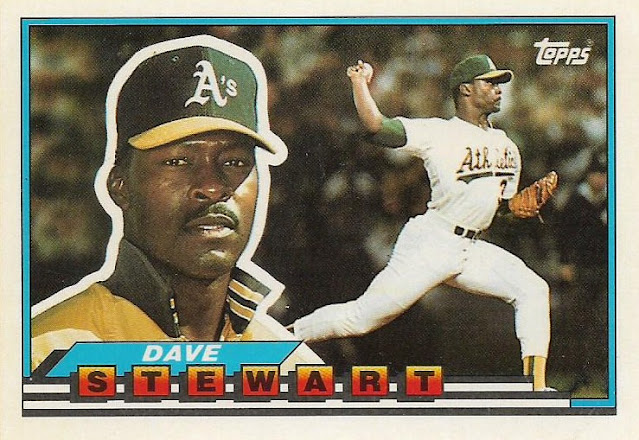 That is a sample of the front. 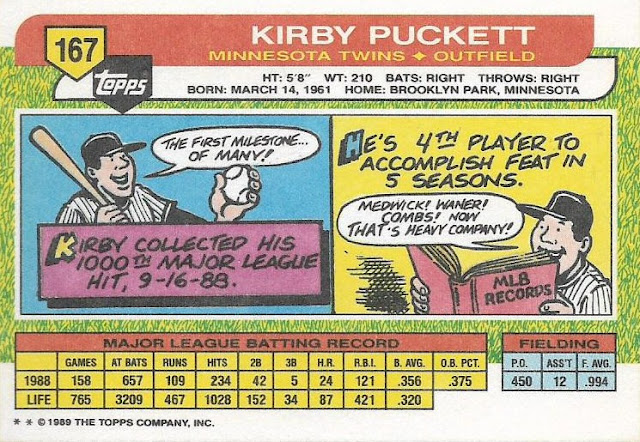 There is a sample of the back. 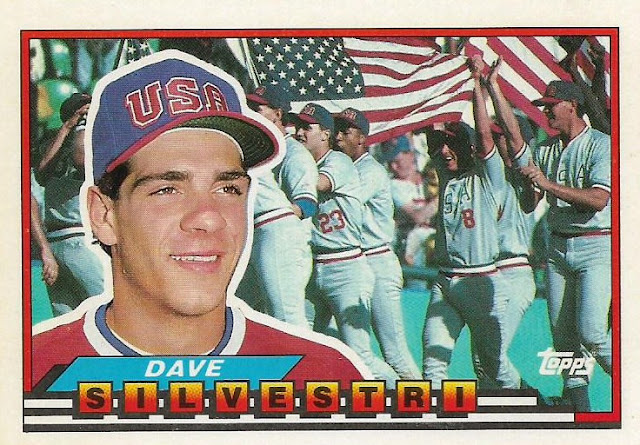 It also includes the Team USA cards from the 1988 Olympic team. I was told that these cards were a little trickier to obtain than most of the other cards in the set, which is why future Dodger Jim Poole was the last Dodger I needed to finish all the Dodgers Topps Bigs from 1988-90.
So, if you're interested in landing this set, all you have to do is submit some World Series guesses in the comments below.
Guess the following:
1. Total runs scored in the 2020 World Series
Tiebreaker #1: Total home runs hit in the World Series
Tiebreaker #2: Total doubles in the World Series
The winner gets the set.
Get your comments in by noon EST Tuesday or you won't be eligible.
Jonathan also sent a smattering of vintage cards and I'll be keeping those, including the '57 card at the top of the post. Here are the others: 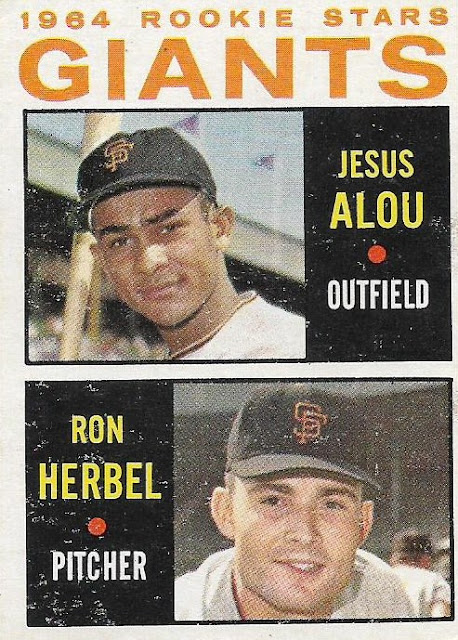 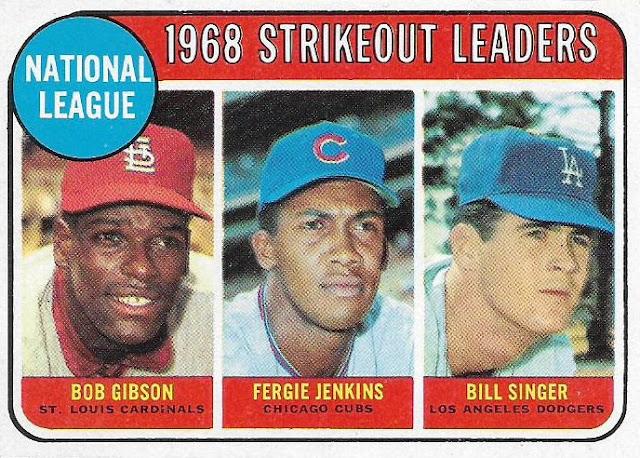 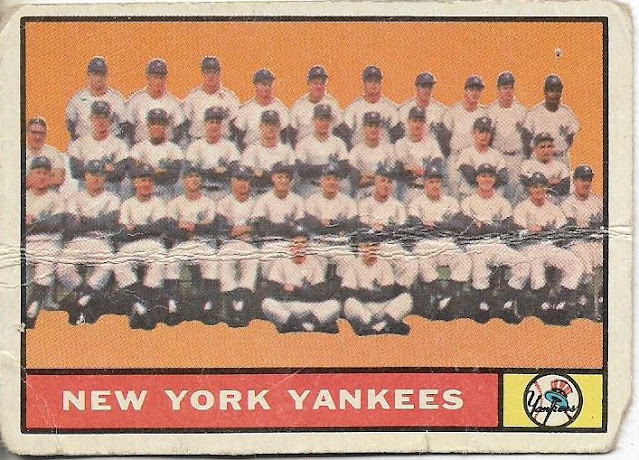 The 1961 Yankees team card is interesting to me because the team being portrayed came from the 1959 photo shoot, not the 1960 session. 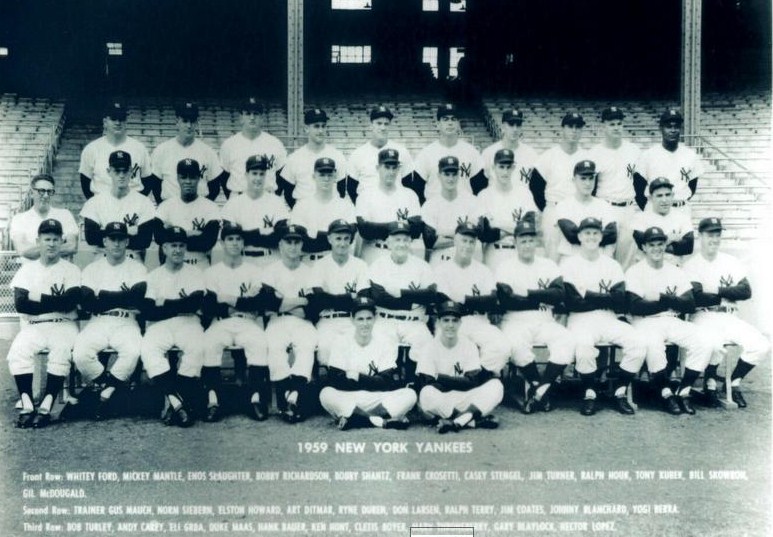 This is helpful, not only in finding Whitey Ford (front row, first guy on left), Mickey Mantle (next to Ford) and Yogi Berra (second row, last guy on the right) on the card, but also discovering that Roger Maris is nowhere on that 1961 Topps team card. That's because Maris -- a key part of the Yankees team in 1960 -- was on the Kansas City A's in 1959. 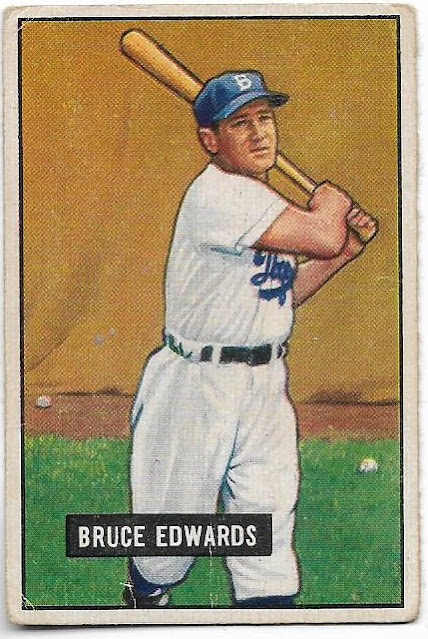 Jonathan also sent this super-appreciated 1951 Bowman Bruce Edwards. I love these cards and I still have so far to go to finish the Dodgers.
OK, that's all for today.
As soon as I sense the card room walls closing in on me, you'll be seeing more giveaways like this.

John Sharp said…
That 1957 Topps card is of Les Moss, who, infamously, was the Detroit Tigers Manager who was let go in the middle of the 1979 season so Sparky Anderson could become the Detroit skipper.

Sport Card Collectors said…
I need to downsize at some point though I can't let myself do so
October 18, 2020 at 8:43 PM

Fuji said…
I've been downsizing the past few years due to lack of space myself. This giveaway is very generous. Due to shipping costs... Goodwill has been the recipient of most of my giveaways.

bryan was here said…
I'm always downsizing, I never keep any of my doubles. One card of each, unless it's a variation. Easier to manage that way.

gregory said…
Impressive accomplishment by Kirby Puckett on the back of that '89 Topps Big card! Thanks very much for running this fun contest, Night Owl.

BaseSetCalling said…
I liked Topps Big so much that I don’t need to enter this one.

bbcardz said…
I only watch the World Series when the Dodgers are in it. I'm so happy about the Dodgers coming back from a 3-1 deficit to win the NL pennant! Great contest here too. Here's my entry: