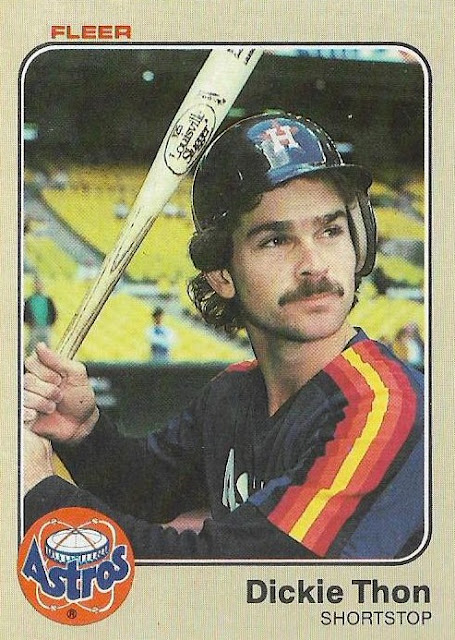 I ran some errands yesterday and as I often do when I'm on that side of town, I journeyed through Target's monstrous parking lot to check out the card aisle, just for giggles.
The reprieve on the plundering of card aisles that I came across only a month ago was no longer the case. Outside of a half dozen boxes of 2020 flagship complete sets, there were no baseball cards. Empty.
I shrugged my shoulders and left the store. No loss. If people want to hoard 2020 cards, the cards that I find the least interesting of all the cards ever made, then go ahead. I'm not going to scream about sneakerheads and greedy ransackers like I see so many collectors do. I just don't care enough about current cards to care. Let them have it. They don't know what's good for them anyway.
This weird pandemic-driven situation has actually sharpened my focus. I am far less scattered in my collecting than I've been at any point since I began this blog. Thanks to empty card aisles, I now take my allotted cash for each week and devote it to various online card goals.
Each week, I select an objective and I spend cash on those cards -- cash that would've gone to blasters and fat packs in past years.
My primary focuses right now are on:
1970s Kellogg's cards
1977 Topps football
1956 Topps
Vintage Dodgers from the '50s and '60s
1970s Wacky Packages
So I toggle between sportlots and ebay and gather what I can. Because COMC is on the fritz, some of my other goals are now on standby -- particularly the 1975 Topps buyback quest, since COMC had, by far, the most of those.
But otherwise, I haven't come across the inflated prices that others are complaining about. They're saying that the jacked-up prices that have inflicted current cards have moved into vintage, too. Maybe it's because I am not chasing after fancy vintage cards, but I haven't found it. Instead, I'm happily scooping up old cards I've always wanted.
I am laser-focused. And it feels pretty damn good to collect this way.
However, there is collateral damage when you are this focused.
I have many other collecting goals than the ones I listed above. They're not getting much attention though. 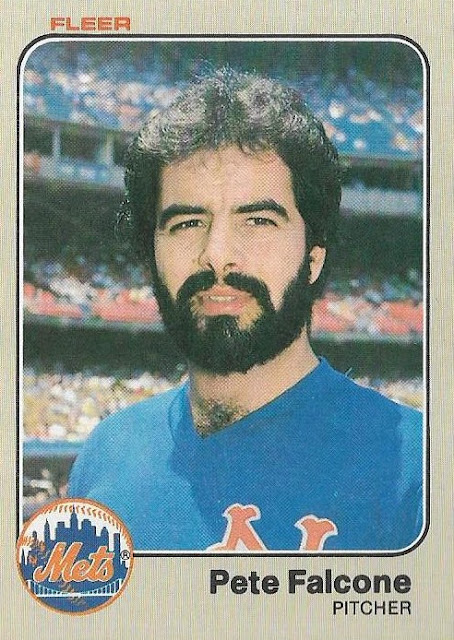 One neglected collecting goal is completing a bunch of 1980s Fleer sets.
I set this goal three or four years ago and made want lists for several of them. I managed to finish the 1981, 1984 and 1988 Fleer sets but I've stalled ever since.
They're just not in my sites right now. I'm half expecting the last few 1982, 1983 and 1985 Fleer cards that I need to just land on my door step. Everyone has these cards, right? But that hasn't happened.
So, I was pretty happy recently when a guy named Stuart sent me a stack of 1983 Fleer needs. He's a friend of GCA at The Collective Mind and all of a sudden the strange wonders of 1980s Fleer -- something I've written about over and over -- were in my home. 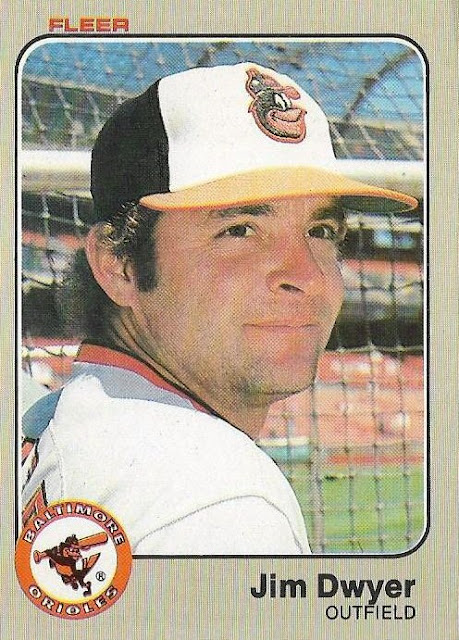 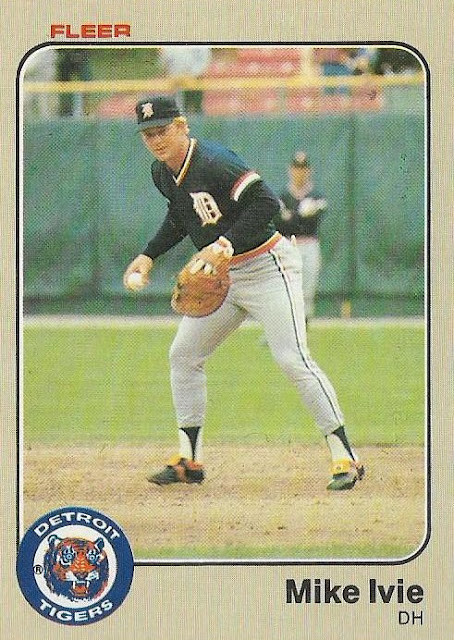 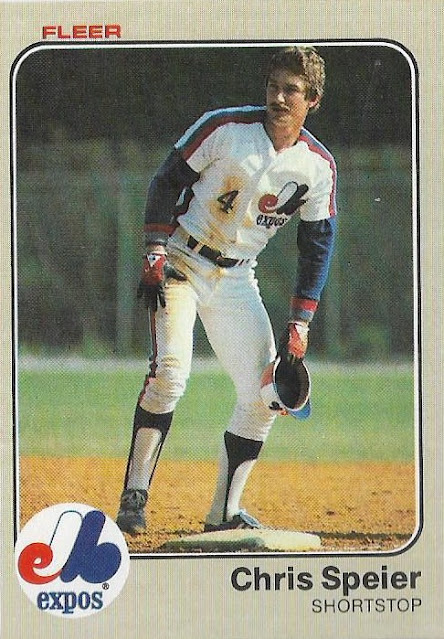 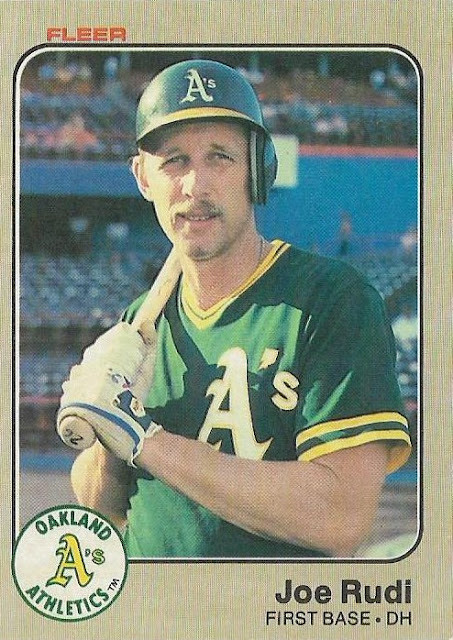 The '83 Fleer set, while never my favorite Fleer set, stands out because it's a transition year for the 1970s players of my youth.
With '83 Fleer, you often find players on teams that are unexpected, at least for us '70s kids. 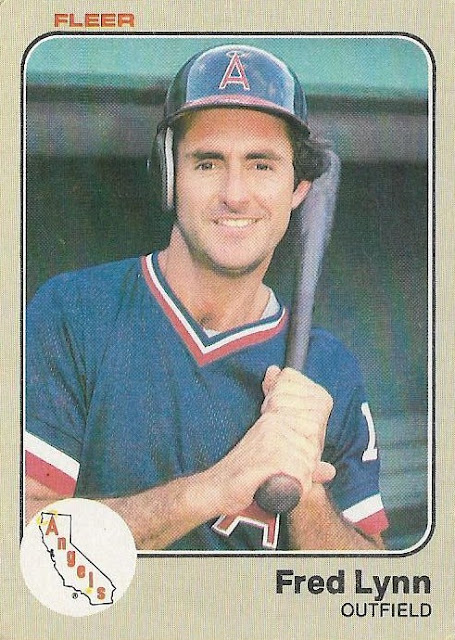 Fred Lynn is not an Angel (or an Oriole or Tiger). He is a member of the Boston Red Sox. And should be wearing a bright red helmet! 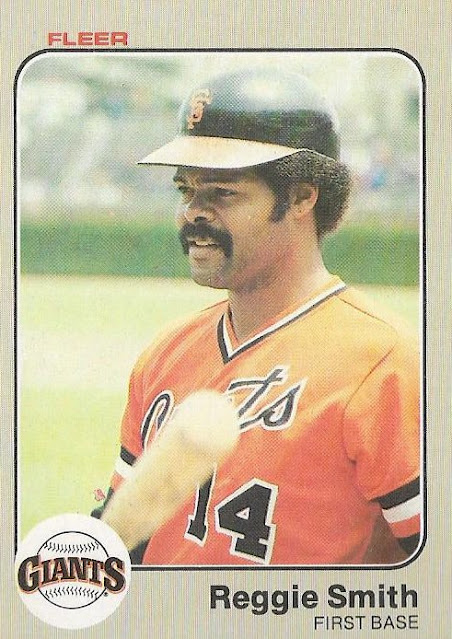 Reggie Smith is not a Giant! What the heck?! He is a Dodger, of course. Or at least a Cardinal. (Old-timers say he is a Red Sox player like Lynn, but I have no memory of that. I was toddling around then). 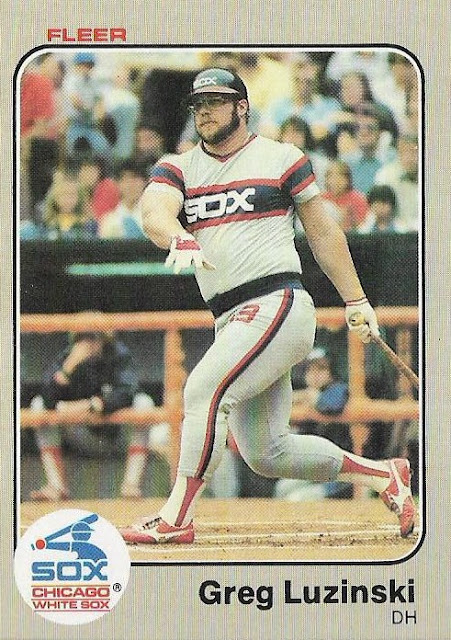 Greg Luzinski isn't a member of those White Sox teams with the hitch-in-his-swing logo. Yeah, he looks unforgettable in that get-up, but I know The Bull first as a Philadelphia Phillie. Bulls' BBQ is in Philadelphia, you know. 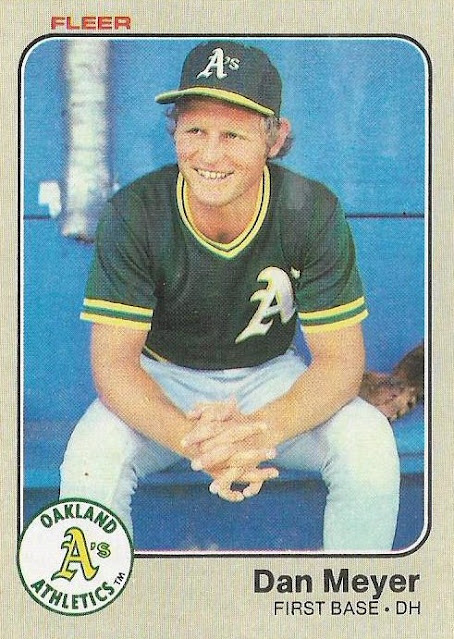 Even somebody like Dan Meyer I remember first as an original Seattle Mariner. Can't say I've ever once thought of him as an Oakland A. 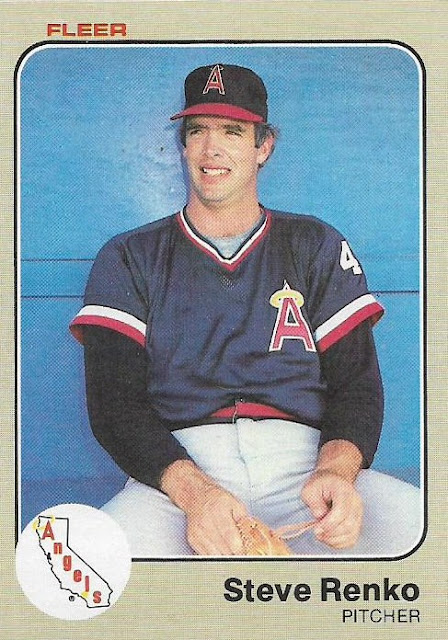 And Steve Renko in something other than a Montreal Expos jersey will never look right according to the kid who admired his Renko Expos card every day in 1976. 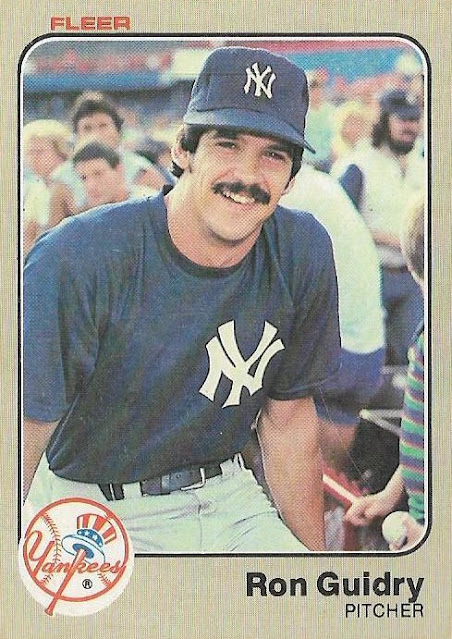 Thank goodness that Ron Guidry didn't change teams during the 1980s, although we non-Yankee fans certainly wished he did. What a great card. 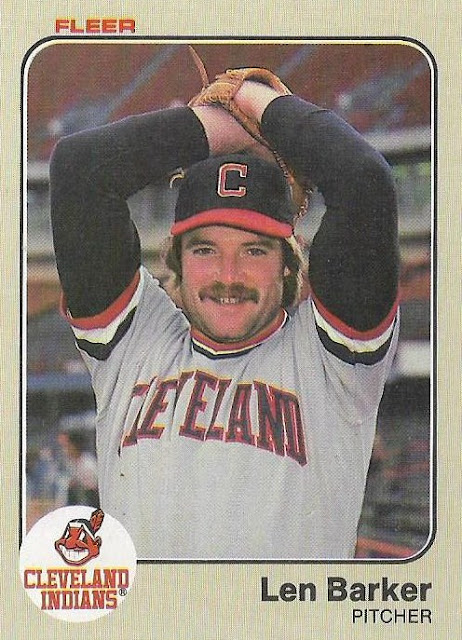 And 1983 Fleer does include some young stars with their proper teams. Yeah, there is Sandberg and Gwynn, but don't forget about Len Barker! Mr. Perfect, as he was known in the early '80s. 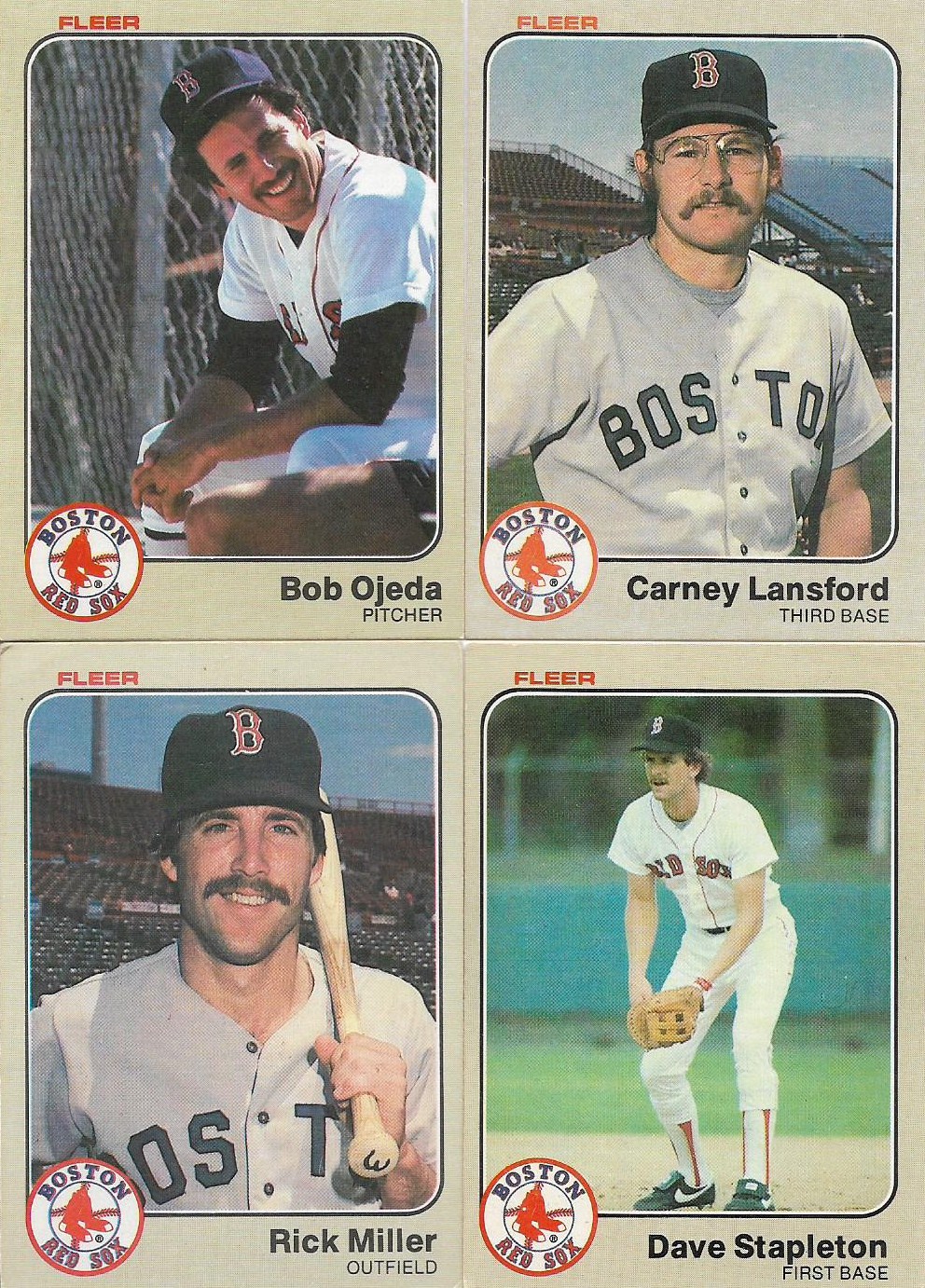 Even though Lynn wasn't wearing a Red Sox jersey, Stuart sent plenty of Red Sox. I'm happy to say I've seen every one of these guys play live. 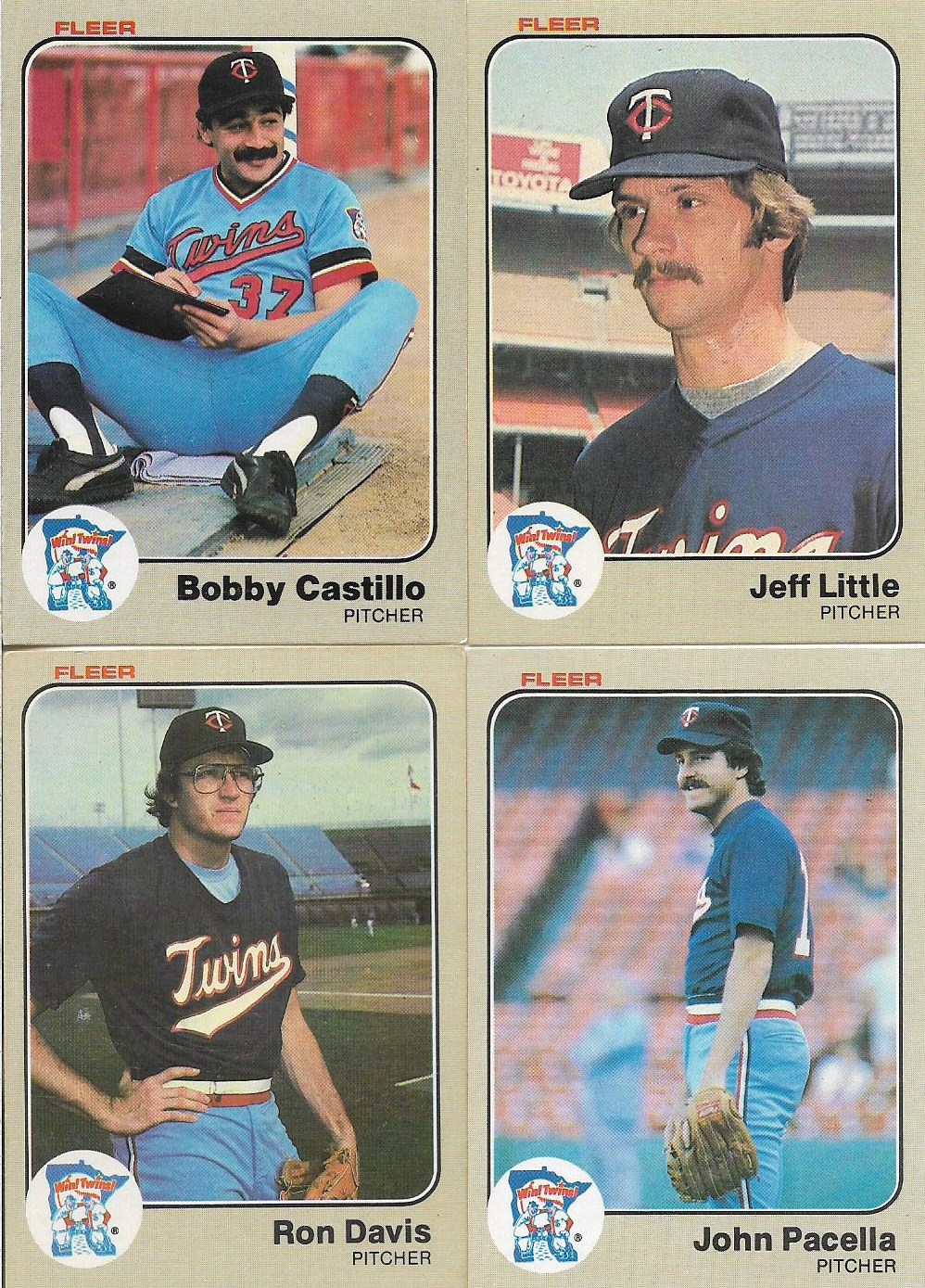 There were a healthy number of Twins as well. Mr. Castillo, please have some decorum. 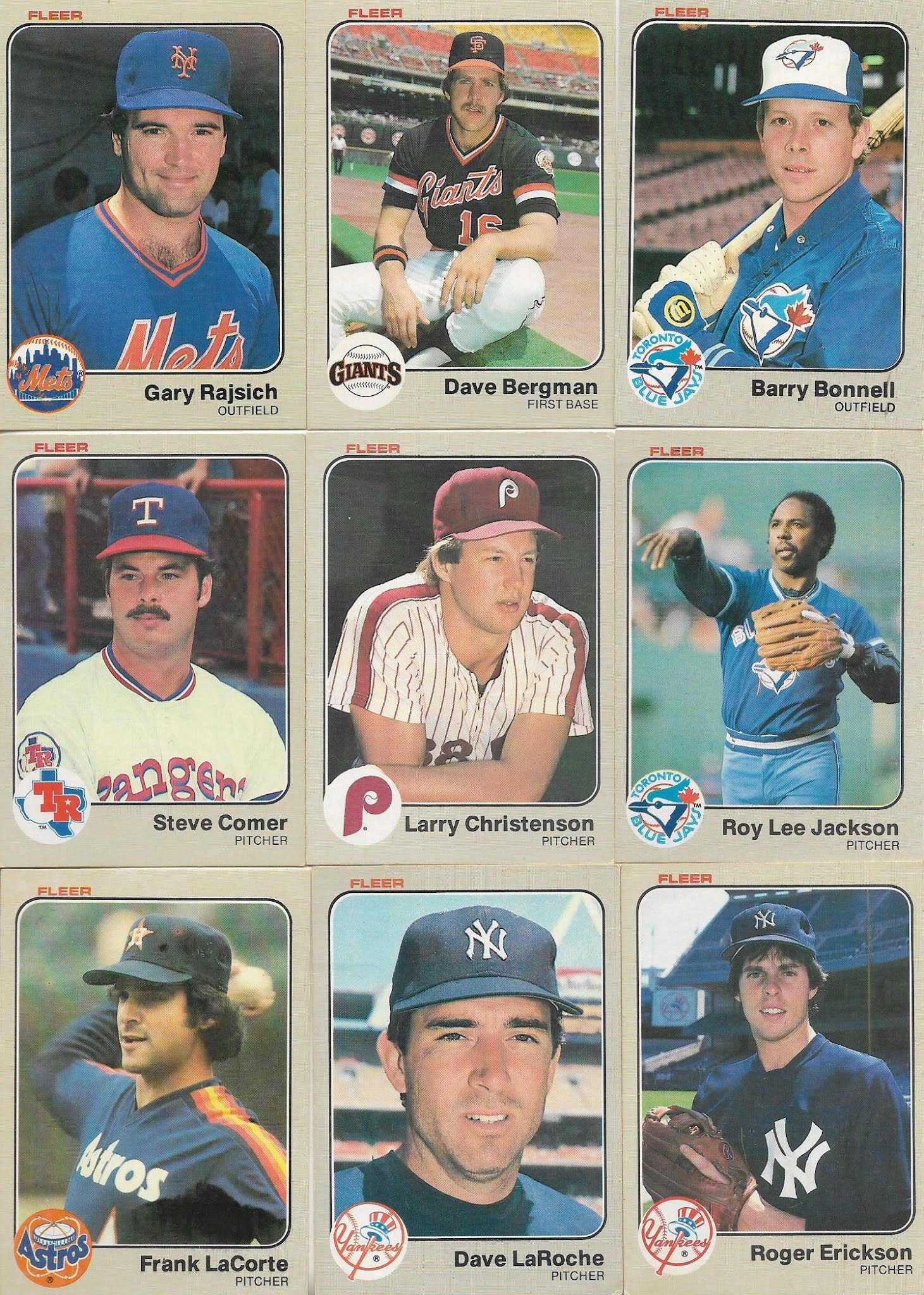 All of these cards get me much close to finishing off this set. And I'll be checking out what I can send Stuart in return.
But I can knock off two more of my 1983 Fleer needs because Chris from The Collector also sent some 1980s Fleer needs recently. 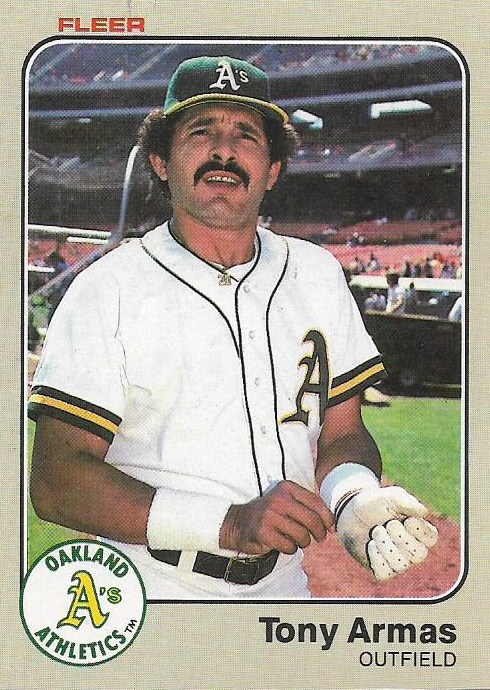 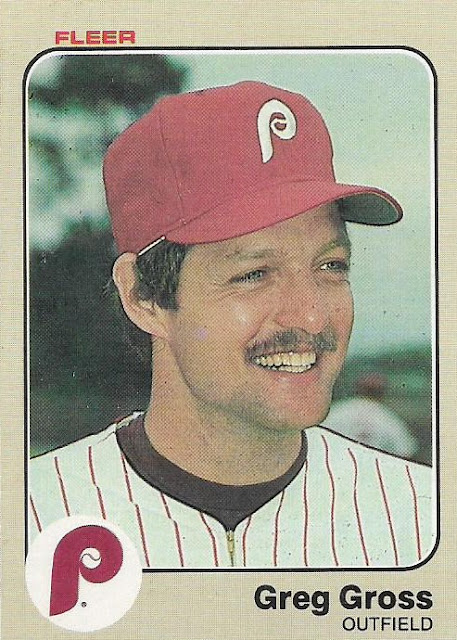 Tony Armas was a big deal back in the '80s, like the Nelson Cruz of his time. 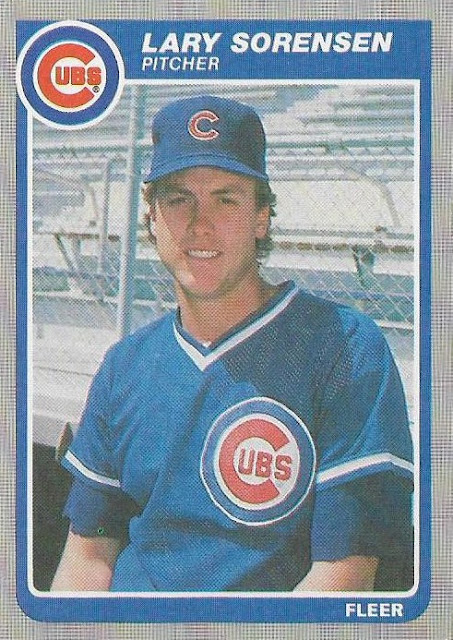 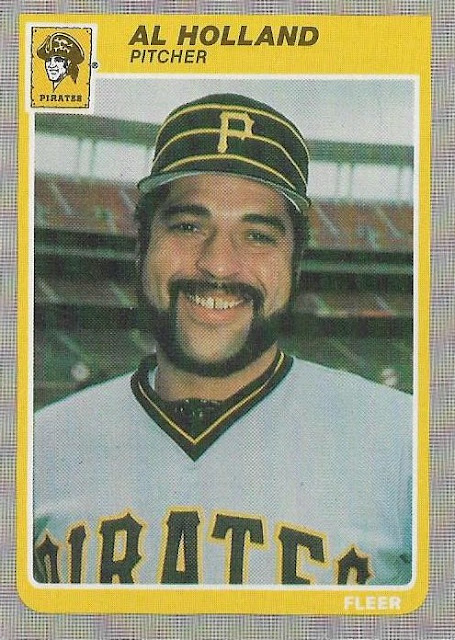 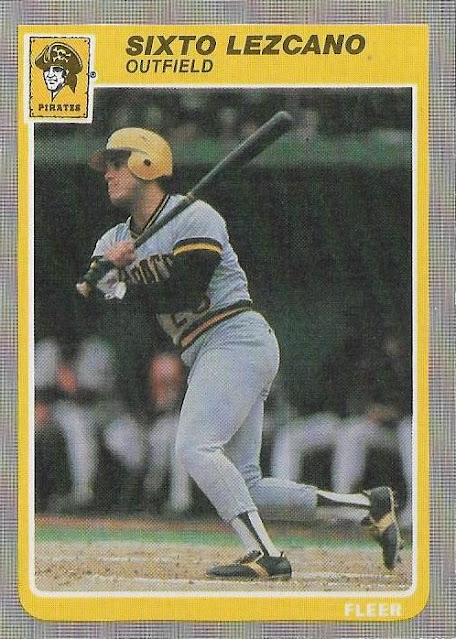 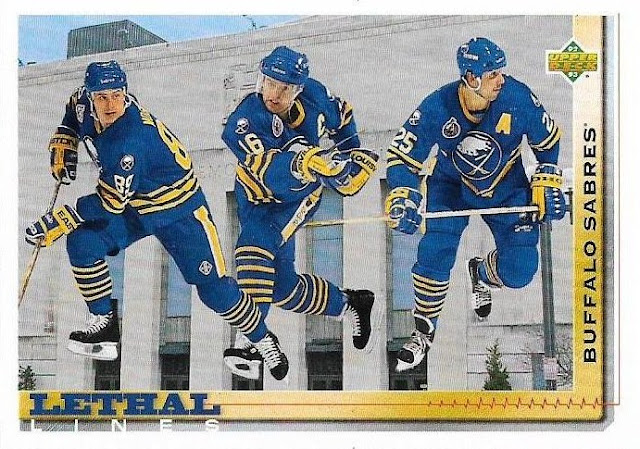 Peter K Steinberg said…
Great cards. It was nice to see some of the older names. And it was nice to see names I'm sure I once knew well. And, thank you very much for the PWE that was delivered to me! I really appreciate the cards!!
October 23, 2020 at 7:25 PM

Angus said…
Nice seeing the Chris Speier card. He was a favorite of mine.

Mike the History Teacher said…
That's the second Greg Luzinski card this week -- I love it!

You can probably guess which one I like better.

A few years later, South Side fans were able to watch White Sox legends George Foster and Steve Carlton. Foster was never on a Sox card as far as I know, but Carlton had a few in 1987.
October 23, 2020 at 9:04 PM

Chris said…
I actually picked up some more '83s for you but by the time I received them they'd been removed from your wantlist. Now I know why.

bryan was here said…
I'm a sucker for '83 Fleer cards. I completed that set long ago, but I haven't pulled out the binder recently to look through them. I almost forgot how they were light years ahead of their two previous offerings. The formula for the card backs served them well throughout the '80s and well into the '90s.

POISON75 said…
MR. OWL sir I am glad you got your package from me I will continue to see what more I can find for you. Again I am glad you got the package I was beginning to think that you would not gotten it or accepted it since I don't have a blog site but as my friend GCA of The Collective Mind can contest I always find something for someone usually no matter how big of a stack I can find for them I just hope they know that I am in the same position in trying to complete my set needs. I'll be going to my favorite place that GCA & I like to visit in search for more stuff for you on your lists.
October 24, 2020 at 3:24 AM

Fuji said…
Although I do remember Meyer with the A's, I remember him more as a Mariner too. I vaguely even remember copying him and his head wiggle when he was approaching the batter's box.

And it's cool to hear that Armas was kind of a big deal in other parts of the country too. Always figured he and Dwayne Murphy were just fan favorites lost in Rickey's shadow.
October 24, 2020 at 8:23 AM

Nick Vossbrink said…
Wait wacky packages? Do you have a want list up?

CinciCuse Bill said…
Love your comment on the Castillo card - very funny! That card reminded me of a draft blog I need to get out. Stay tuned and be well!
October 24, 2020 at 10:18 AM

Robert said…
Just for fun, if you have a free moment you want to pass, look up the career stats of Mogilny, LaFontaine and Andreychuk.

acrackedbat said…
It's clear to me now I haven't given Fleer the attention it deserves. I love that Guidry! What a beautiful shot! Looks like I need to flip through the set gallery on TCDB to find a few more wants. Outside of Stadium Club, there's not been much 2020 card stock to catch my eye.
October 24, 2020 at 1:04 PM

Nick said…
I got a surprise package from Stuart recently as well. Always love when people I've never come into contact with send cards out of the goodness of their heart.
October 24, 2020 at 7:15 PM