Less bang for your buck 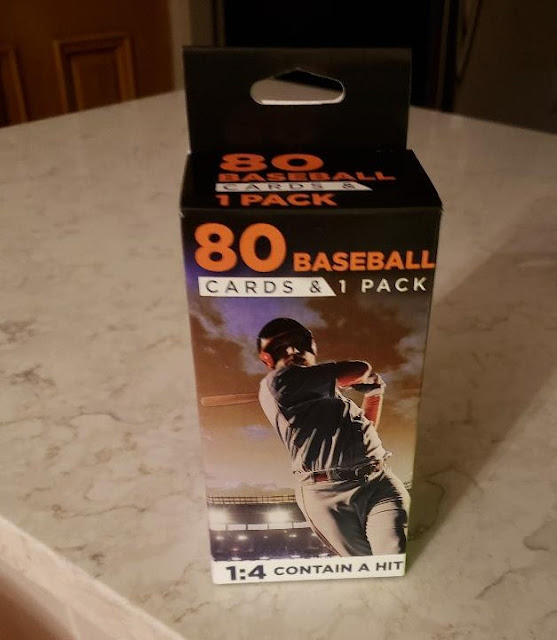 OK, I'm steering this blog away from Dodger cards for a post or two. I'm already getting complaints. 😒
I was running a couple of errands before work yesterday when I stopped at Walgreen's to grab some cookies for someone who has been very good. As I turned away from the shelf, I looked down the aisle and noticed a middle-aged man staring at the toy area, right where the baseball card repacks normally hang.
Could there be baseball cards?
I had heard a month or two ago that even Walgreen's repacks were being raided by the flippers so I didn't even consider finding cards when I walked in, but what was this guy looking at?
As he moved on to something else, I moved in. I was surprised to see three Fairfield repacks hanging on the metal rack. I immediately noticed something skimpy about the box but grabbed the first one (probably should've grabbed the second or third after seeing what was in the first).
Now, the reason that the box was so skinny is that these repack boxes used to house 100 cards. I know, because I have a blog and I document stuff like this. 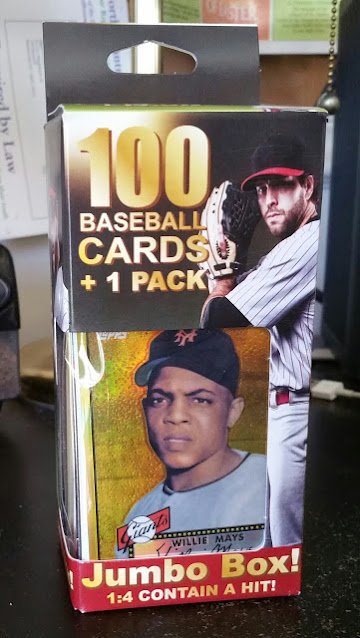 That photo is from 2018. Notice the enticement in the 2018 box that was lacking in the 2020 box. Also, I bought both boxes at Walgreen's and I paid $4.99 in each case.
So we're paying the same price for 20 fewer cards. 2020 is the best.
I can't say I cared much at the time as I was just happy to find some cards that I could find in person. Ordering cards online has been quite productive for me this year but I sure do miss buying cards when I'm standing up.
My excitement though disappeared as soon as I opened the box.
There was no hit. And the one pack included was this: 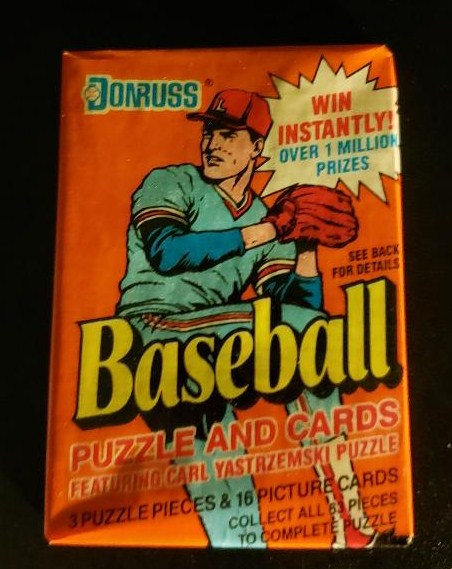 This  is absolutely no lie: all of my 1990 Donruss cards could blow away in a windstorm tomorrow and I wouldn't care. In fact, windstorm, where are you?
I definitely opened this first because it's like eating your vegetables off the plate before getting to the good stuff. There were some cards I needed, because there are so many junk wax sets that I don't care if I ever complete. In fact it was pretty decent, considering. 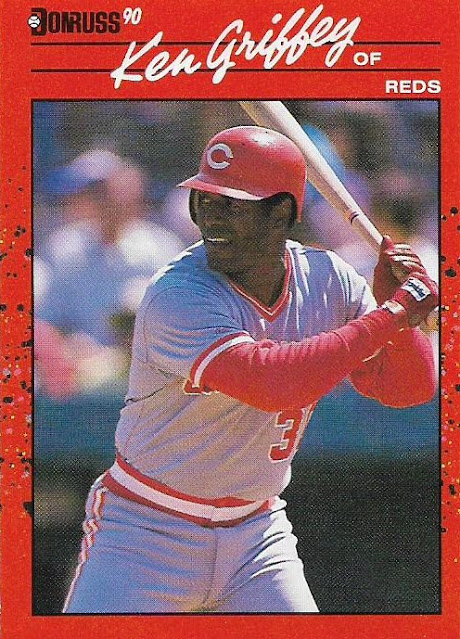 A few cards in, Ken Griffey Sr. showed up. (I'm starting to believe that the overpowering redness of 1990 Donruss is what pushed the Reds to win World Series that year). 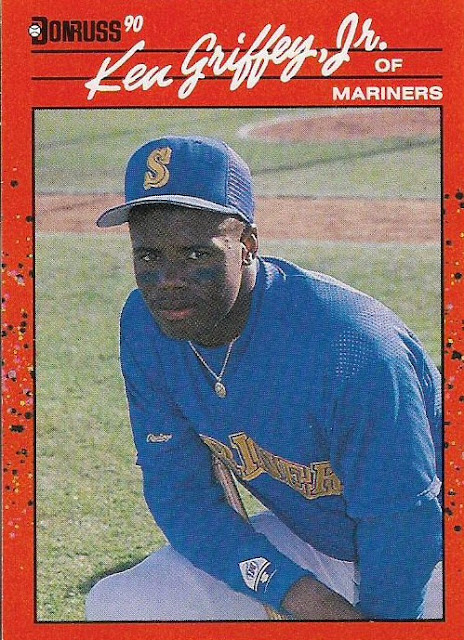 Two cards later, Ken Griffey Jr. showed up. I have never seen this Junior card before.
I then moved on to what I thought would be the better stuff. Sure, there would be a whole bunch of junk wax, but if you have the patience to weed through that, there are interesting items within. I am a repack purchasing veteran. I know how these work.
But after going through card after card of 1987 Topps and 1988 Topps and 1989 Topps -- seriously, nobody on the planet needs 1989 Topps. I think everyone, even everyone in Turkmenistan, has a full allotment of 1989 Topps -- I was getting deflated. 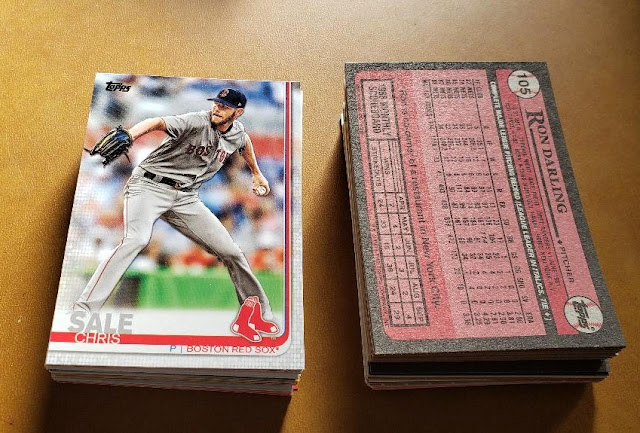 That's a better illustration. Many more duplicates on the right.
In total, I needed 34 cards. And "need" is being very generous. I don't need any Bowman prospects cards at all. But I got four. I don't need any 1992 Donruss ever. But I got two. I am not interested in 1990 Fleer (three of the 6 were needs), or 1991 Upper Deck (1 of 2 were needs) or yet another 1990 Donruss card (thanks, Joe Boever, you couldn't have hopped into the unopened pack?).
I'll show the five best things about this repack, but I'll admit, it was a struggle. 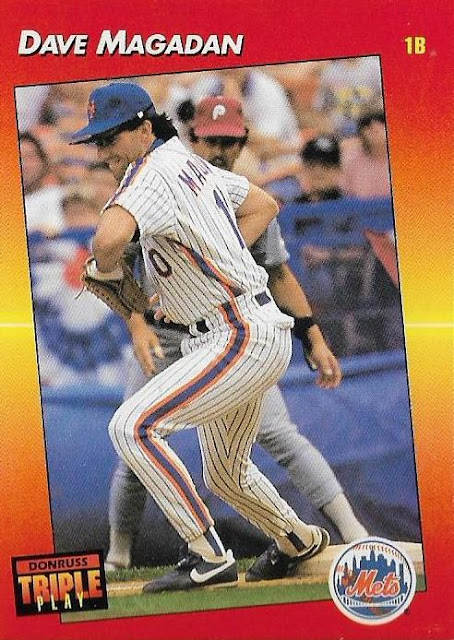 4. Three 1989 Upper Deck cards
I have so few '89 UD cards and I feel compelled to treasure each one because people won't stop talking about the set. If repacks could include more '89 and '90 UD and throw all the '91 UD in a landfill, I'd be happier. 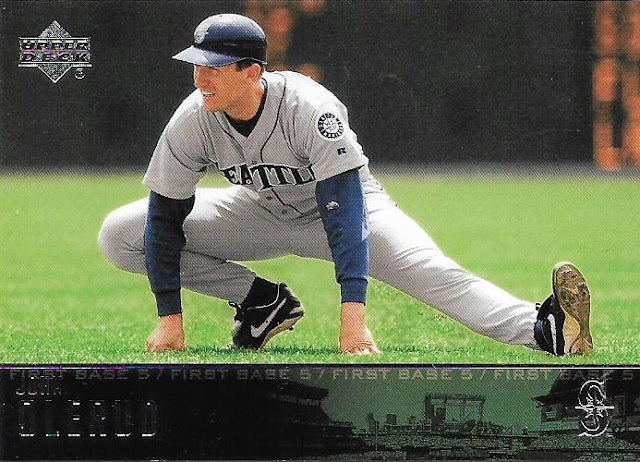 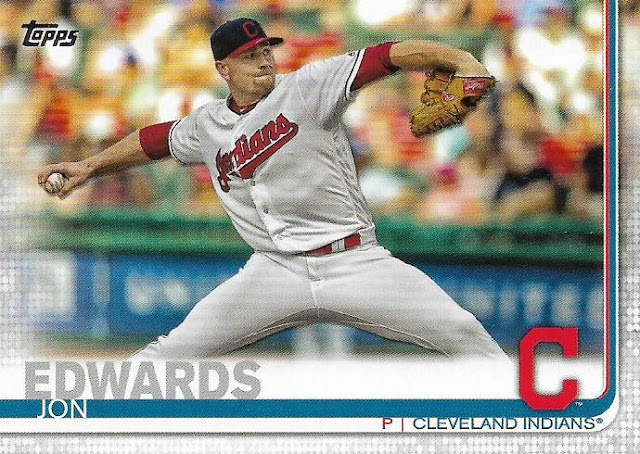 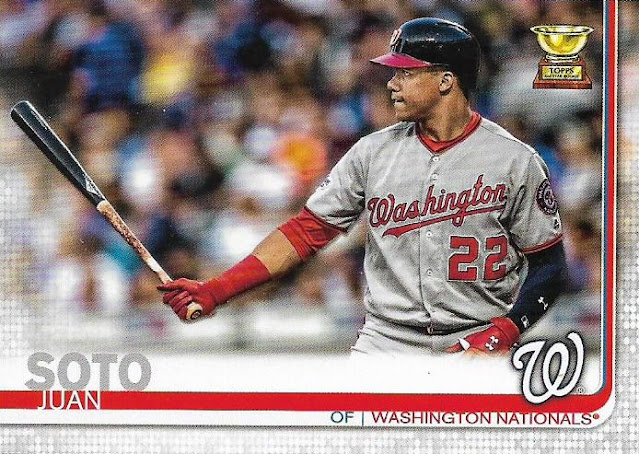 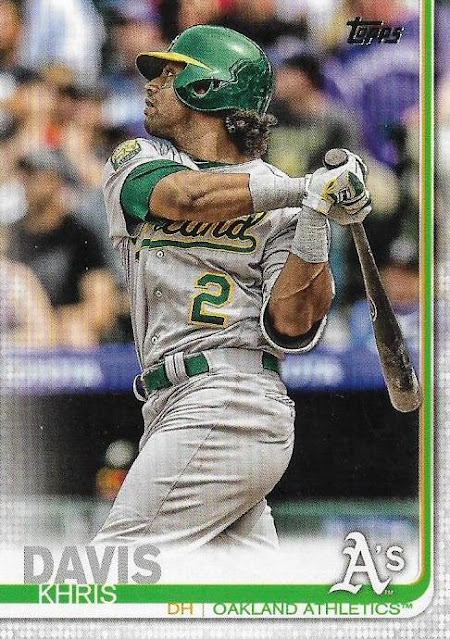 2. 2019 Topps cards
There were six cards from last year's flagship set. I needed four of them. I admit I got all misty-eyed when I pulled these: remember when flagship was colorful? Remember when you could buy it in a big-box store any time you wanted? Remember when Juan Soto was a big deal? It seemed so long ago, and 2019 Topps brought it all back. 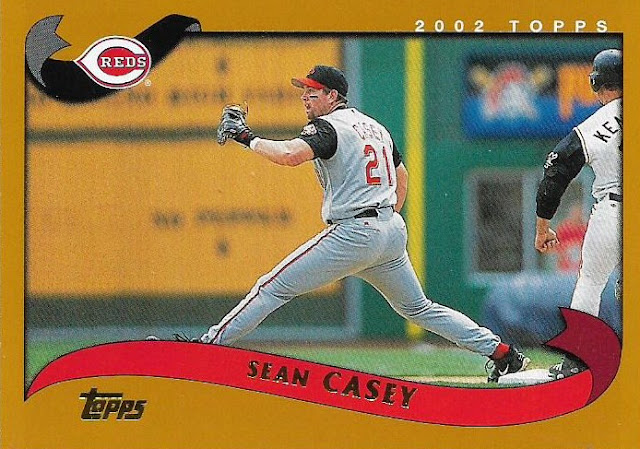 1. Five 2002 Topps cards
I almost doubled my inventory of 2002 Topps cards with this purchase. It is the one flagship set that I have the fewest cards of going back to the 1950s. 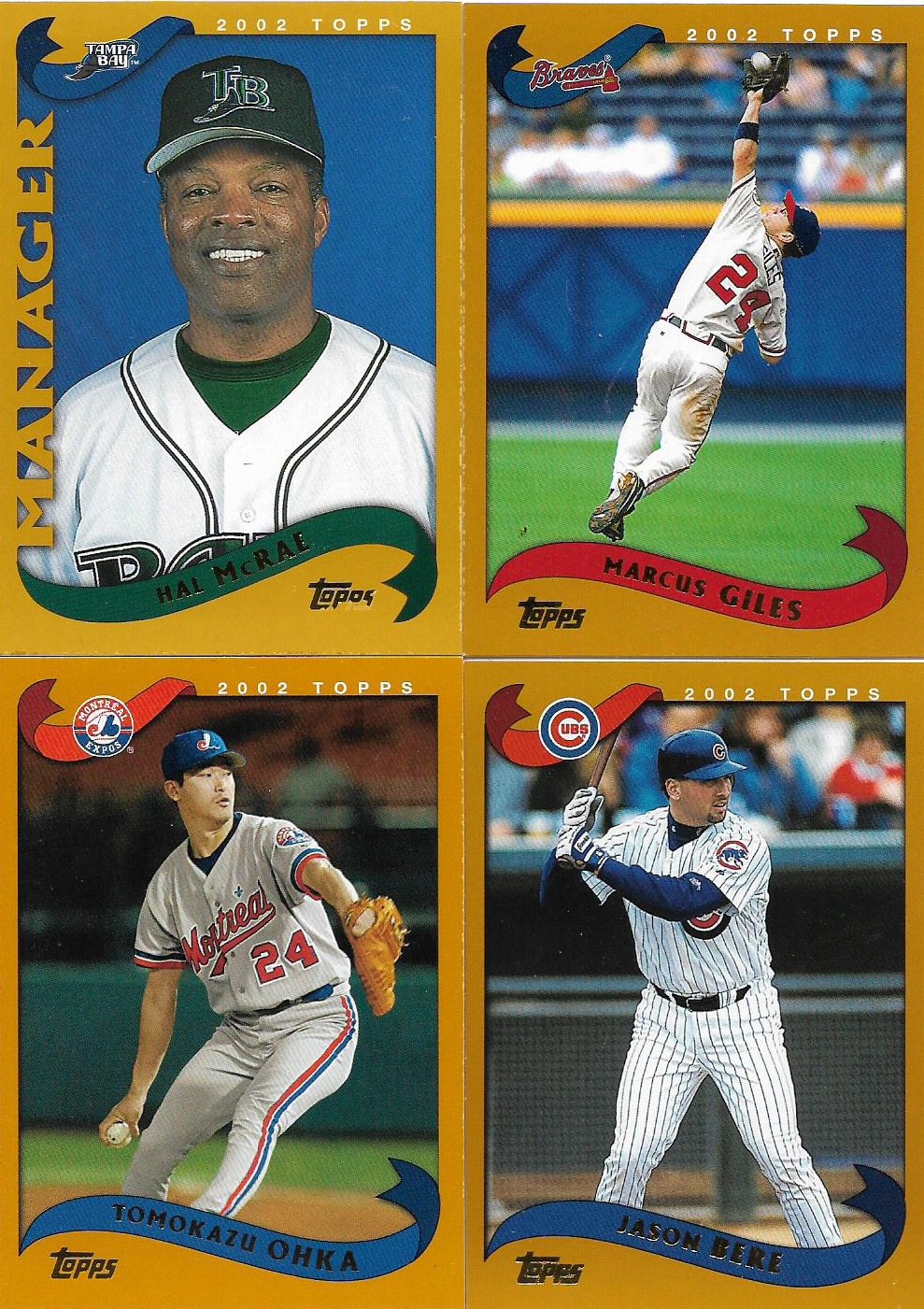 I won't say I will ever love 2002 Topps and its butterscotch borders. But the lack of much in my collection, plus the Archives' treatment of it this year (some of the parallels are fun) has caused me to look at it in a slightly fonder way. In an "if only" way.
That was about all that was salvageable about my first repack purchased in over a year. Unless you want to count a couple 1987 Fleer or a Future Stars card of Butch Huskey.
The cutback on cards but still charging the same price is not cool. I know everyone is scraping by these days, but passing that onto the customers is not the right move.
See? I'm much happier when I'm showing Dodgers cards.

bbcardz said…
I'm with you (happier when show Dodgers cards). Still, I'm glad you found SOMETHING in the wild. Personally, I've learned not to buy repack product. To me, it's like buying a box of disappointment. I like more bang for my buck.
October 30, 2020 at 9:19 PM

Angus said…
I'd like to say that I couldn't believe people would complain that you were posting too much about the Dodgers, but sadly, I do believe it.

If feel if they want to complain that you're posting too much about your favorite team, let them! Even if they didn't just win the World Series, it is your blog and your favorite team! Post about them all you like. You're still including cards in your posts.

I'll write about the Dodgers for 100 straight posts if I want. Nobody will stop me.

Jupiterhill said…
I forgot Hal McRae managed Tampa. I probably would have been disappointed with that box, but would have got enjoyment just opening something. 92 Triple Play will always be a favorite and I also need to work on 2002 Topps.
October 31, 2020 at 1:05 AM

Jon said…
I saw a thread on Twitter about people trying to flip repacks, and can honestly say that that's something I never would've thought would become a thing.
October 31, 2020 at 8:24 AM

Fuji said…
Not sure what I'm more surprised about...

A. Someone complained that you are blogging about Dodgers.
B. You've never seen the 1990 Donruss Griffey.

You know I'm not a Dodger fan by any means, but outside of the fine writing... I come to this blog to see Dodger cards. Plus they just won the World Series. If the A's or Padres won the World Series, I'd be writing about them for at least three or four posts straight. Plus... it blows me away that people complain about what other people write on their blogs.

As for the Griffey... I guess I saw that card a lot, because I was working at a card shop during that time period and if I had to guess, I'd say we had a 25ct. box filled with that card sitting in our display case.
October 31, 2020 at 1:17 PM