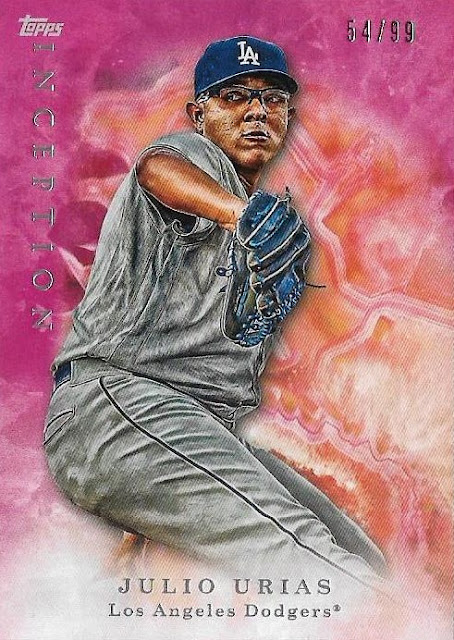 It's my turn to hop aboard the pink bandwagon.
As you may know, Collecting Cutch has been keeping the focus on Breast Cancer Awareness month by posting every day and tying Andrew McCutchen cards to various entertainment hotties with ... uh ... notable dimensions.
Most of the pink cards that he's shown are impressive. They're also mostly recent cards from the span of McCutchen's career. But pink cards have been around a lot longer than that, and back in the day they weren't nearly as exclusive.
I'm quite familiar with pink cards because the Dodgers were often presented with the color pink on Topps cards. I don't know why Topps attached that color to my team but it was pretty obvious.
But let's go back farther, into the '50s.

Topps' most prominent use of pink came in 1959. The Dodgers weren't the only team to feature pink cards in that set, Topps didn't discriminate with colors in '59. These pink cards, though, are very of their time and are among my all-time favorites when it comes to pink cardboard.
Topps used pink on its cards throughout the 1960s although not significantly with the Dodgers. It even colored its card backs pink, most significantly in 1969.
Then, in 1973, the Dodgers were matched up with pink on its Topps cards for every year through 1982. 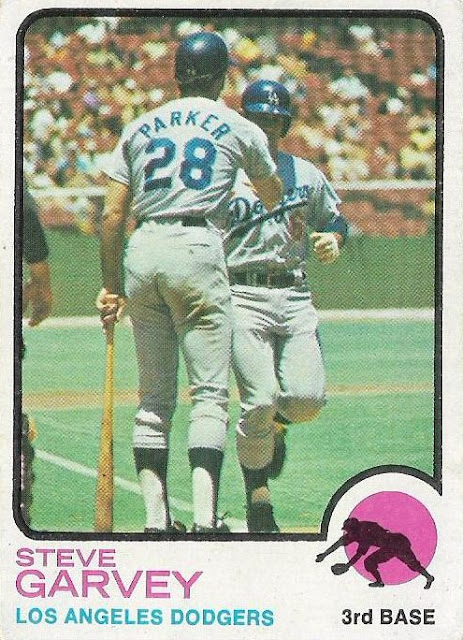 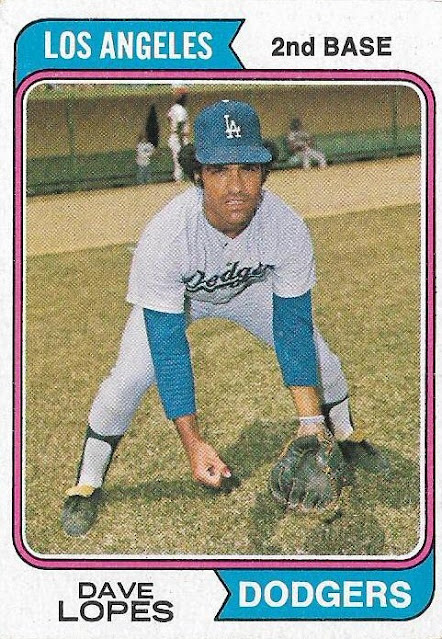 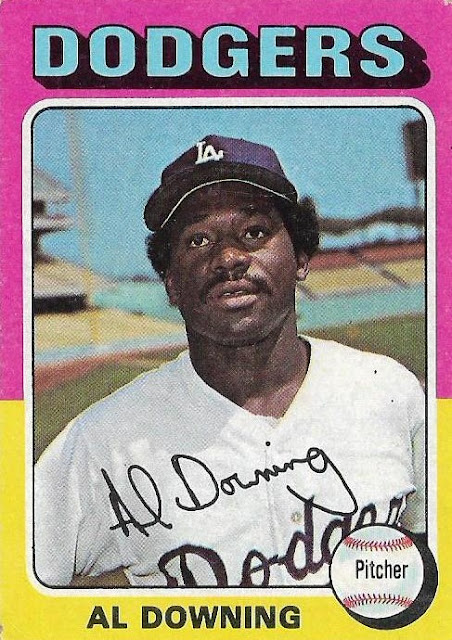 The pink treatment was understated in 1973 and 1974 and then Topps went all out in 1975. Like 1959, pink wasn't reserved only for Dodger cards.
In fact, some of the best cards in the '75 set showcased pink loudly and proudly. 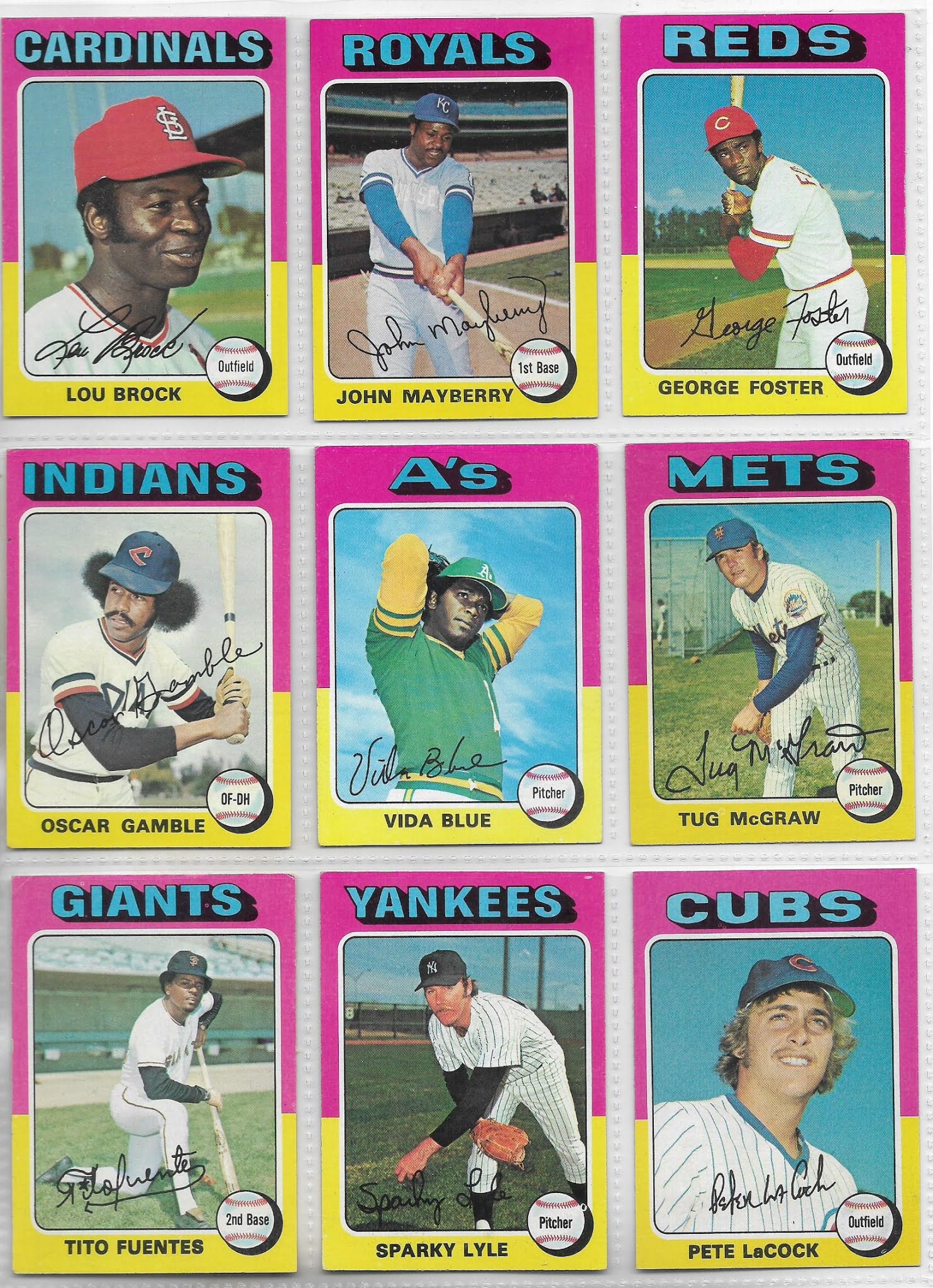 Pink was just a regular part of the color palette for Topps during the '70s, guaranteed to show up every year.
In the '75 set, pink can be found on the league leaders cards, the postseason cards, the MVP subset cards, the rookie cards, and even the checklists.
During the following years, even when the Dodgers didn't showcase pink on its cards, you could still find a Dodger with pink somewhere on the card: 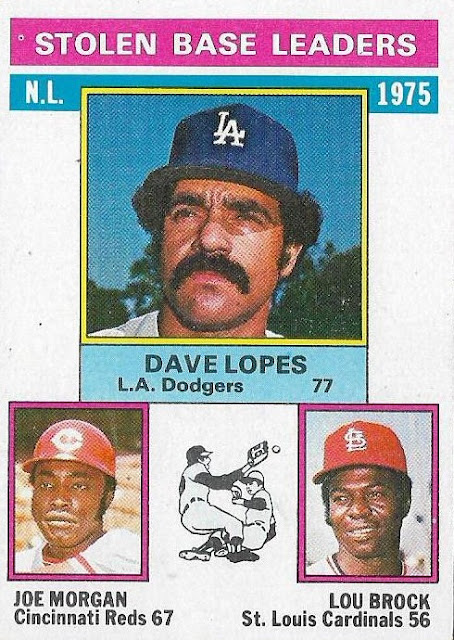 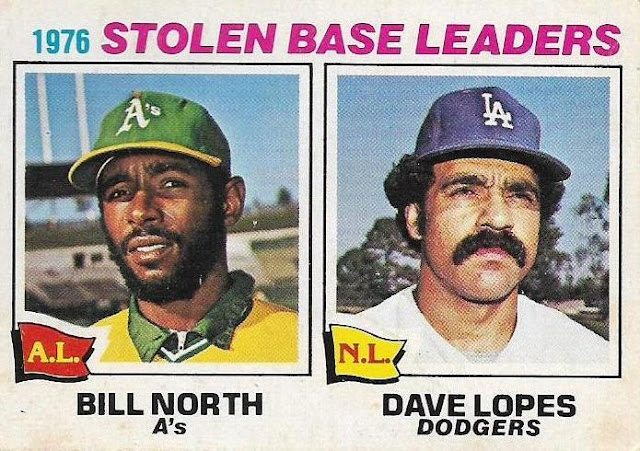 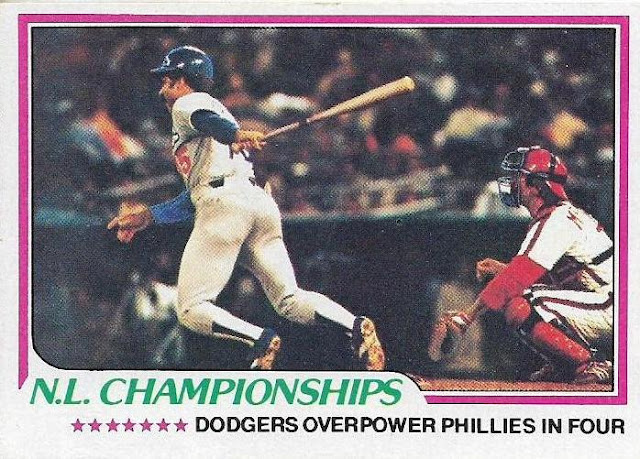 All of them Davey Lopes, in this case.
Then 1979 came. This particular year of Topps kicked off a four year connection between the Dodgers and pink cards. 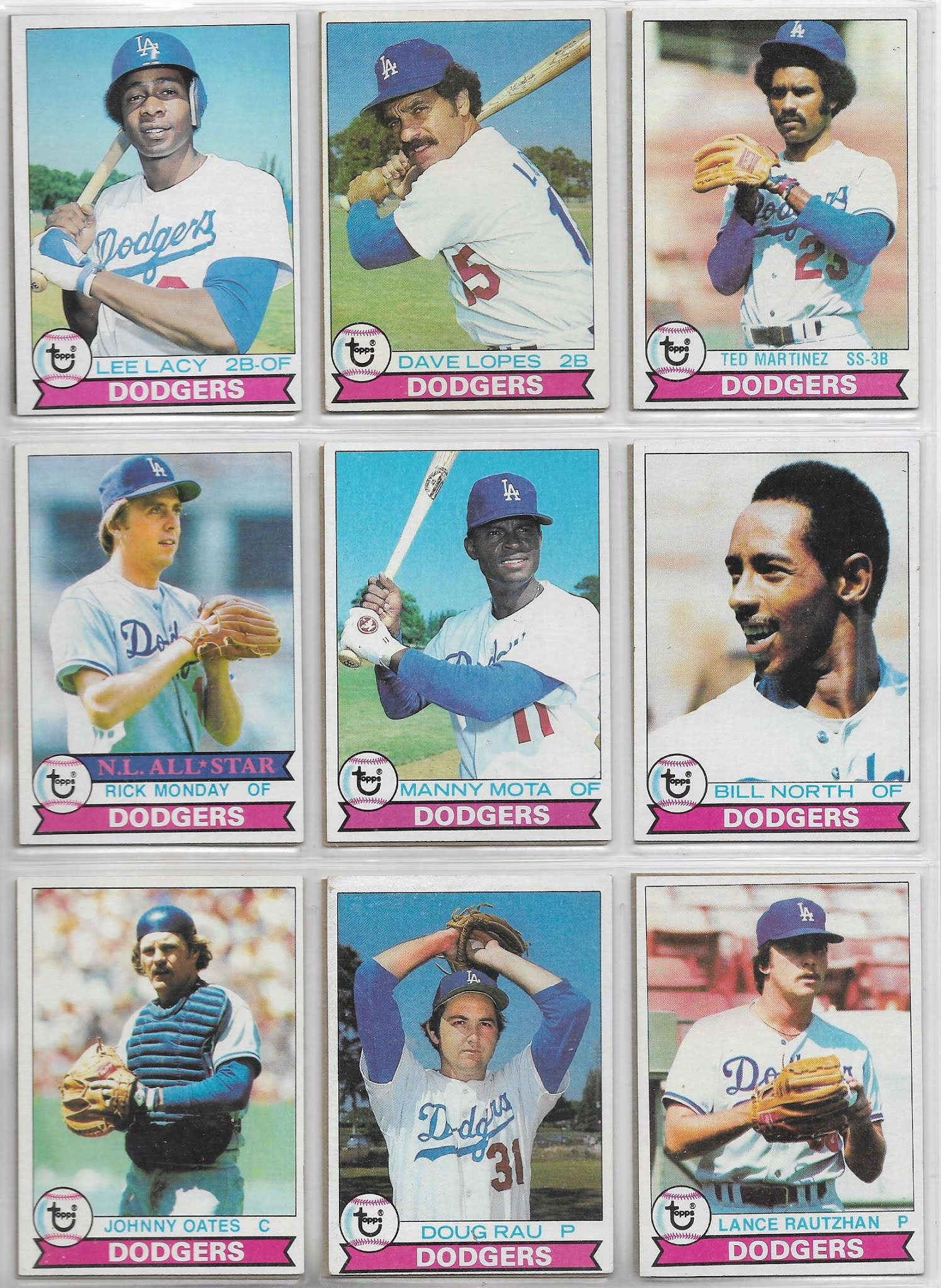 Lots and lots of pink. 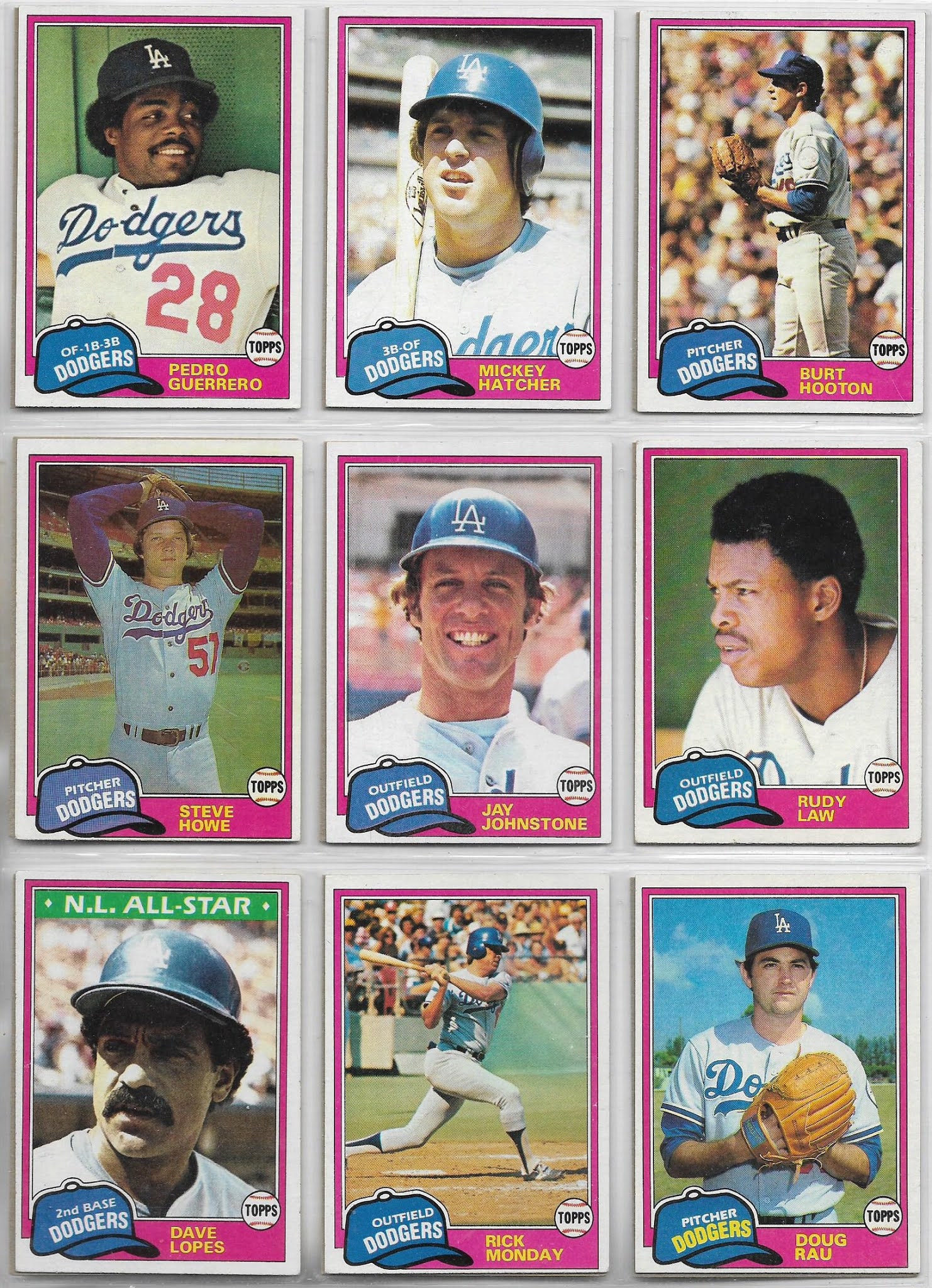 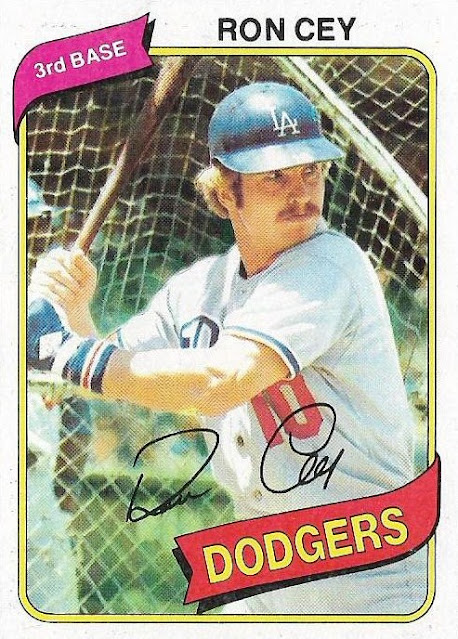 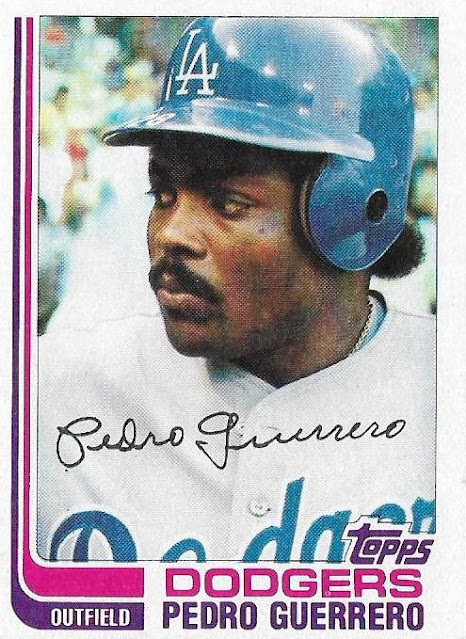 The 1980 and 1982 Topps Dodgers sets were a bit more subdued with the pink, but it was still there!
That ended the streak of Dodgers pink cards though. Entering the mid-1980s, Topps moved to using team colors on cards of the respective MLB teams, and -- here's a concept -- blue began to appear more frequently on Dodgers cards.
Pink pretty much disappeared from baseball cards during this time. 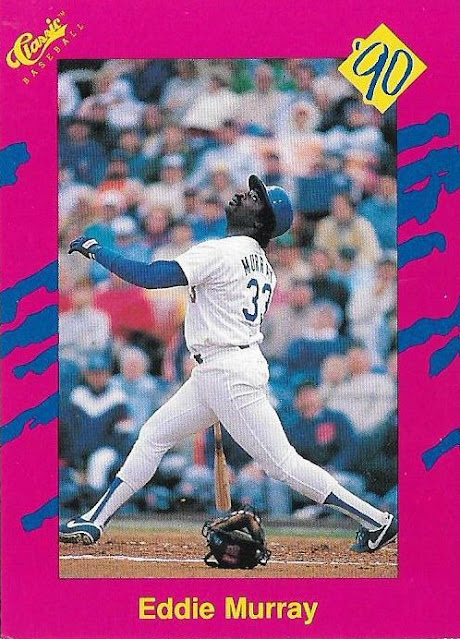 It did show up here and there in the 1990s on sets like Classic and Collector's Choice and in Pacific parallels, such as in Prism. I think this was due to some sort of nostalgia for the 1970s, that 20-year nostalgia cycle that I've written about before.
But the next time pink emerged as a regular occurrence on cards, it was as an exclusive. Pink was no longer an everyday presence on cards, but had become a special treat. 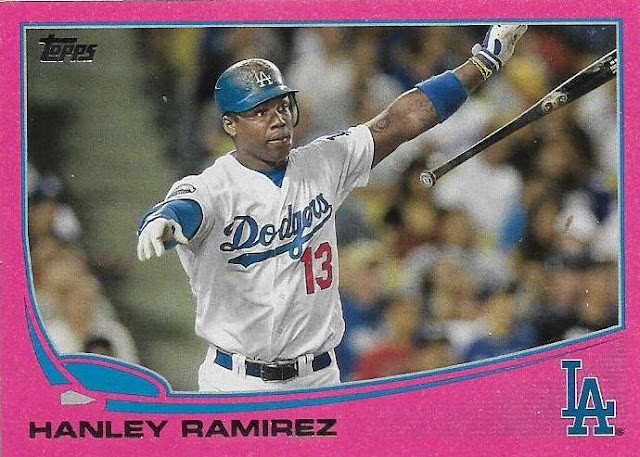 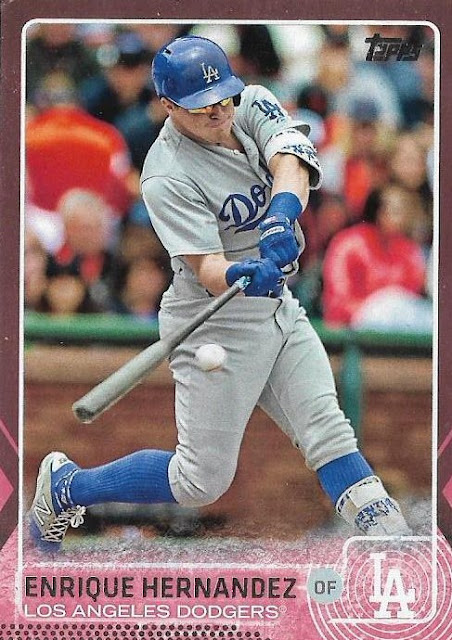 Each of these pink parallel cards -- from 2013 and 2015 -- are numbered to 50 and are among the only ones I have, because I can't be bothered to pay the prices for exclusivity like this. 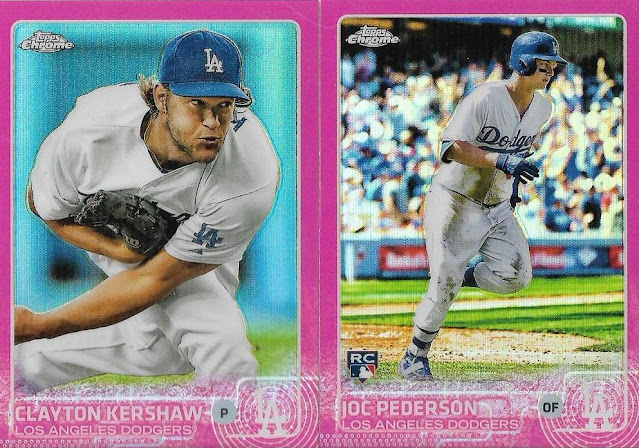 Pink started to show up as an unnumbered parallel in Chrome about five years ago, and thank goodness. It should never be that difficult to find pink cards. 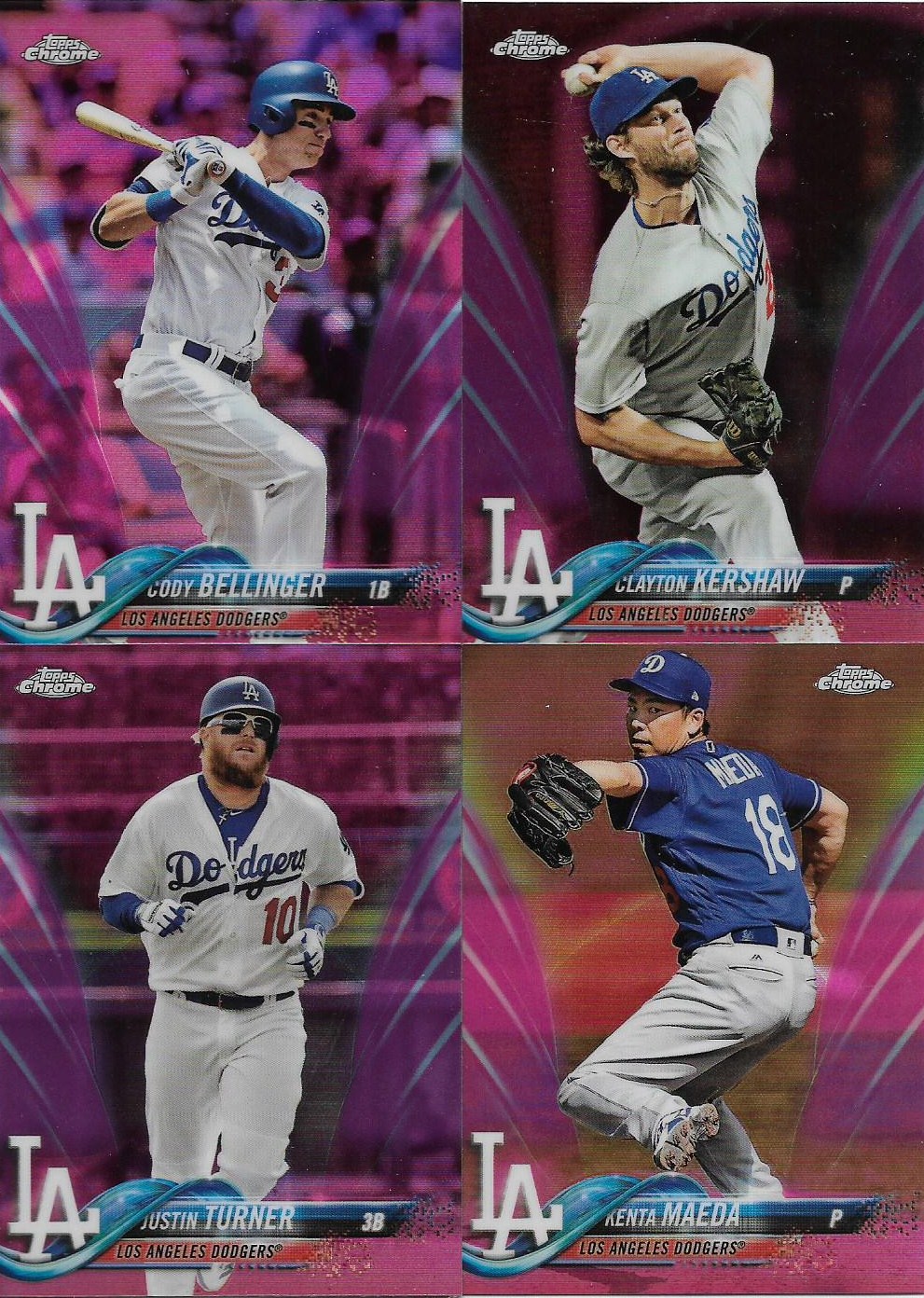 That's where we're at right now. You can find pink in Chrome parallels. 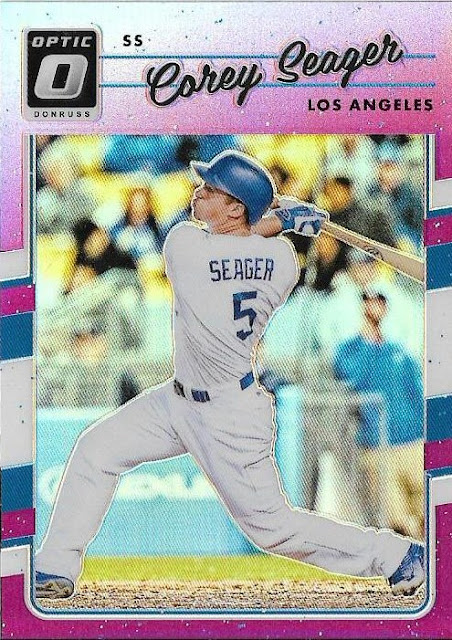 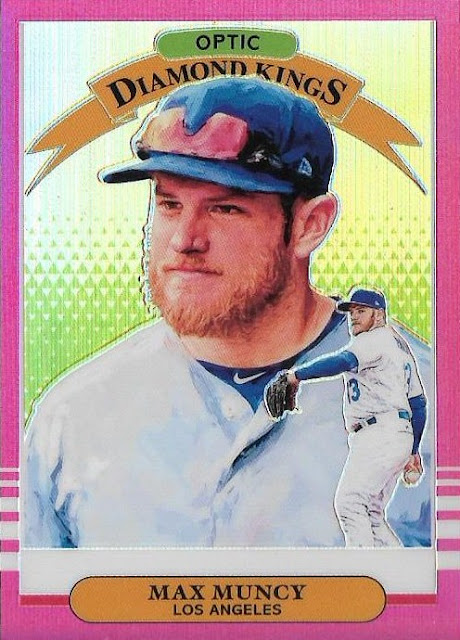 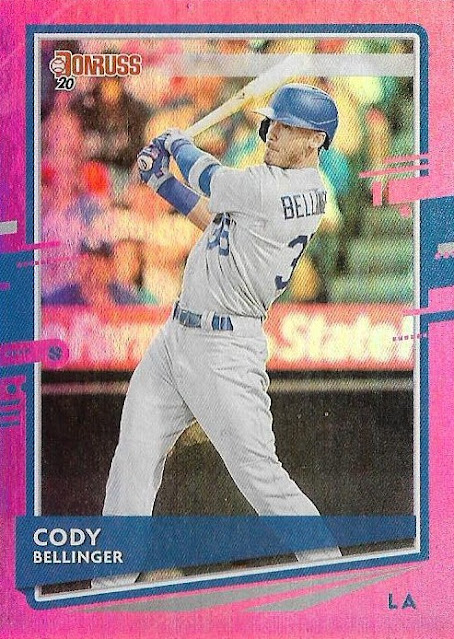 And you can find pink in Panini parallels, too. 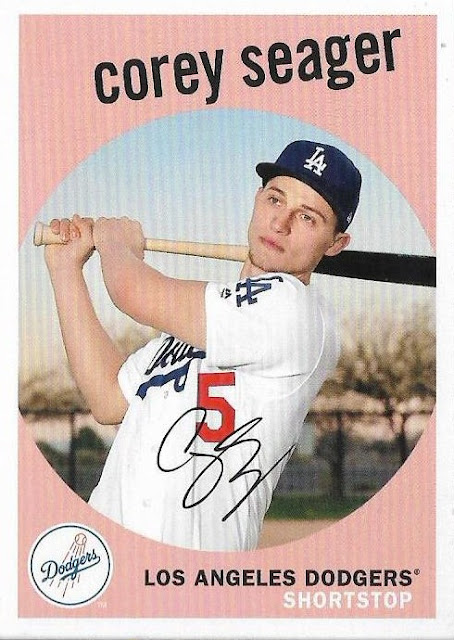 You can also find it when Archives or Heritage pays tribute to a past set.
But using pink as a regular part of the base set design?
I guess we can't do that anymore.
Too bad because I think pink makes for snazzy cards. It used to be everywhere on cardboard. 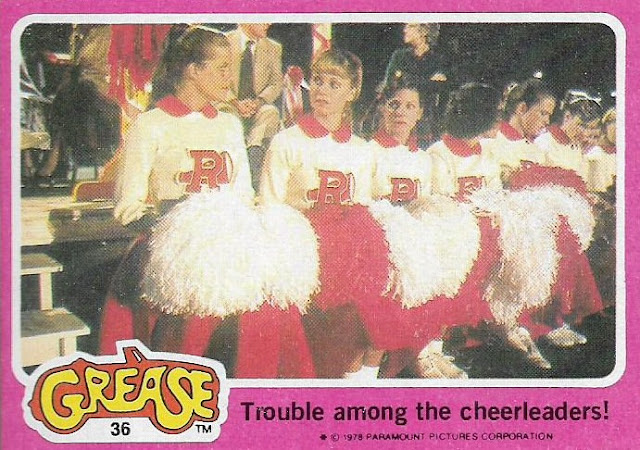 Just about everywhere.
I don't have a lot of history of breast cancer in my family, thank goodness. My grandmother suffered from breast cancer late in life. It wasn't a terrible ordeal for her and she didn't die from it.
But it does seem to be a disease that is everywhere and that's why I'm happy to do this post.
I don't think returning pink to Topps' base cards would do anything to raise awareness for breast cancer research. However, I'm willing to donate a few dollars to the cause if Topps decides to do it.

acrackedbat said…
I was thinkin' Pink Ladies in the first paragraph. You didn't disappoint, adding that glorious card from Grease. Olivia's battle with breast cancer is well-known. She is still battling the disease 35 years later. Thank you for that one. Grease was a big part of my youth and Olivia has been among my favorite artists since I was, well - much younger.
October 9, 2020 at 7:51 PM

Peter K Steinberg said…
Wonderful selection of cards and it was nice to see the historical usage of pink. In the 2015s, which I find to be an ugly design, the concentric circles under the LA logo in the bottom right made me think of earthquake epicenter lines.

Wonder if Collecting Cutch is taking into consideration, for his subjects' notable dimensions, "park adjusted" stats.
October 9, 2020 at 7:58 PM

John Sharp said…
Always think of that '73 Garvey because it looks like a Wes Parker card.

Matthew said…
1988 Topps had the team name rendered in glorious pink for Dodgers as well. Always found it odd but now I see the rich tradition!
October 9, 2020 at 9:04 PM

Elliptical Man said…
I don't think we needed to see that NLCS card. You got a couple nice Kershaws though.
October 9, 2020 at 9:48 PM

Nick Vossbrink said…
One of these days I'll write the post but for the time being, for the 60s through the 80s, pink was 100% Magenta and as such, one of the easier things for a printer to print and keep consistent (Same goes with the cyan/blue that's used frequently)
October 9, 2020 at 10:32 PM

Fuji said…
Although one of my favorite "pink" card comes from the 50's... I always associate "pink" baseball cards with the 70's. It's funny, because I assume baseball cards were marketed more towards boys back then, yet Topps decided to use so much pink during that era. No complaints here though. I love me some vintage "pink" cards.
October 10, 2020 at 11:36 AM

Jafronius said…
I think I commented somewhere else that I really didn't remember pink on early cards....thanks for the history lesson!
October 24, 2020 at 3:32 PM