The continuing horror of buybacks 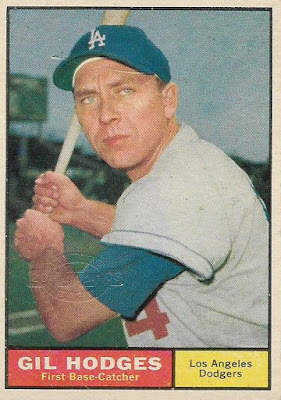 I don't know how long stamped buybacks have been around.

I have considered them a recent creation as they are so pointless to me that they have to be a modern invention, right? The earliest reference to buybacks that I can find on my blog is from July, 2014, not that I should be a historical source for buybacks.

In fact, my disregard for these affronts to cardboard means I'm fully unaware of the fact they probably have been around for much, much longer (I am aware of the longstanding practice of inserting old cards that are newly signed into new product, but that's a different thing and totally understandable).

For instance, the card above.

I didn't notice the stamp at first as it's much less apparent than the buybacks these days. And then I was horrified. WHY ARE WE STAMPING A PERFECTLY GOOD 1961 TOPPS GIL HODGES CARD?

It's a good thing I have a copy of this card -- unstamped -- already. This rant would be a lot longer.

So this weird practice of stamping perfectly good cards has been going on at least since the the start of the 21st century. I have to say, this is not a good look, 21st century. Stop it right now.

I received this card from Jeremy of Topps Cards That Never Were (And Were Never Stamped). Just about all of the cards he sent were fancy in some way, numbered and other kinds of semi-exclusiveness. 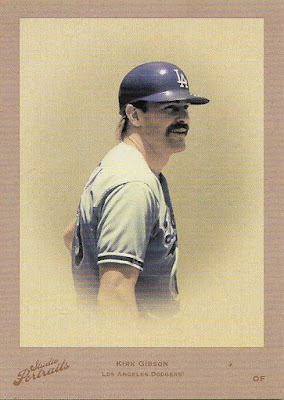 This is a Donruss Studio Portraits card from 2005 Throwback Threads. The stamp on the back (ON THE BACK -- BUYBACKS -- ON THE BACK!!) says it is one of only 25 made. I already have another one of these. So having two of the 25 makes me cackle inside. 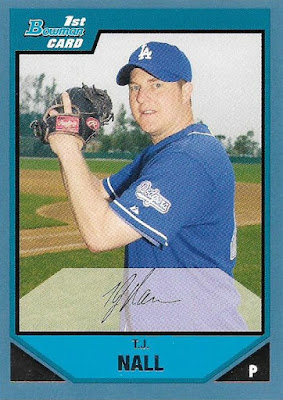 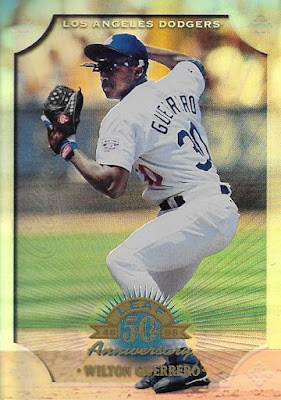 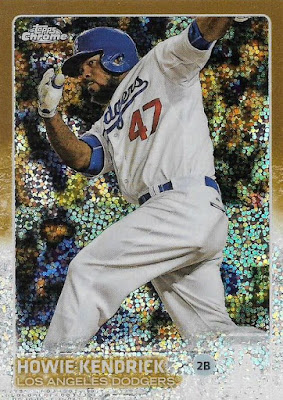 Parallel versions of base cards. That Kendrick card is quite a sight and baffled me for a good while. I believe it's one of those "pulsar" parallels but in gold form. Yup, had no idea these existed. 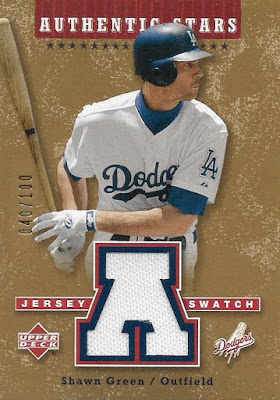 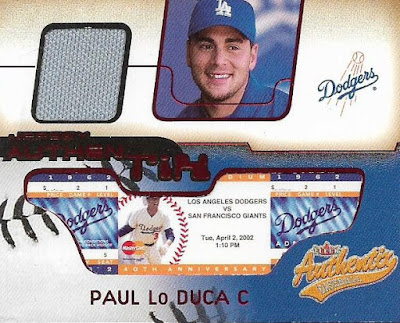 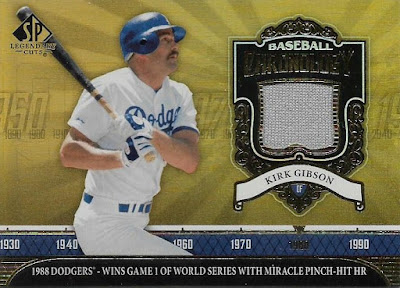 This is the relic portion of the package. The Shawn Green relic gets added to my already completely unnecessary number of Shawn Green relics. The LoDuca is a relic card I had once but then got rid of in a relic purge and now it's back! The Gibson relic is the best because it's my first one of him. Likey. 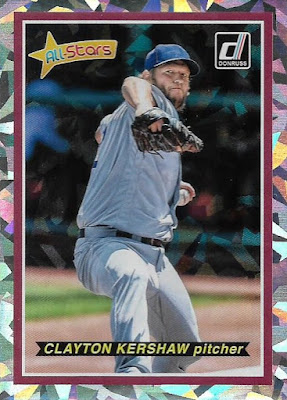 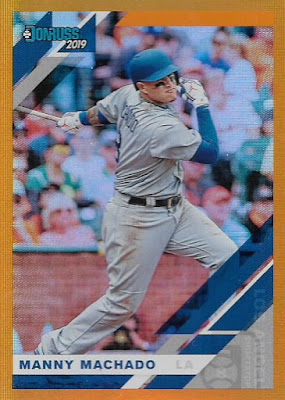 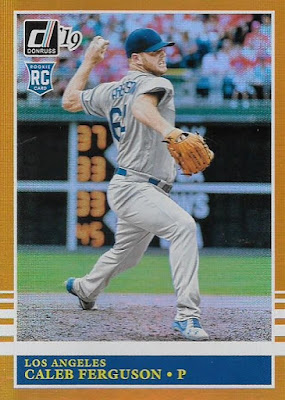 Now the Panini portion of parallels-and-such that I didn't know existed. I will probably get every parallel of Caleb Ferguson by the end of the year because people keep sending them because nobody knows who he is.

Jeremy also sent a couple of his creations, although both are kind of half a card. I guess you'd call them samples. 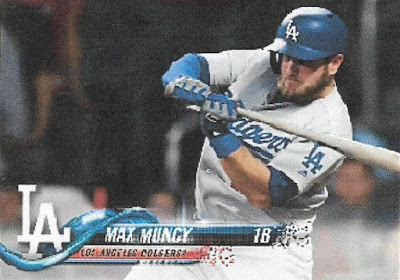 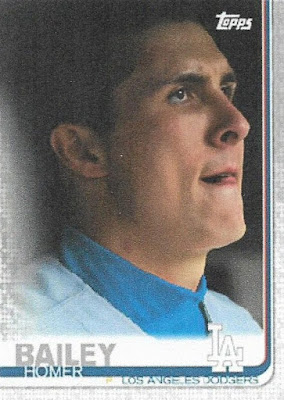 The Muncy card is a very good reason for creating a Card That Never Was. The guy needed a base card in a 2018 flagship set and Topps didn't want to create it.

The Homer Bailey is flat-out interesting as Bailey never played for the Dodgers. He was acquired by the Dodgers in the Yasiel Puig/Matt Kemp deal and then instantly released. He's now with Oakland, sporting a 6-plus ERA.

So those are some much appreciated -- and different -- cards from Jeremy.

They're helping me get over the stamped horror of that '61 Hodges.

Old Cards said…
Never knew buybacks dated back to 2003. I had to enlarge the Hodges card to find the stamp. In your blog on 2-28-19, you discussed your efforts to collect the '75 buybacks. I wished you well, but commented that the appeal of a set of identical looking cards with the exception of a stamped logo on the card escapes me. You told me there is a lot about collecting that escapes me. After reading this blog, it escapes me even more.
August 19, 2019 at 8:37 PM

night owl said…
I collect the 1975 stamped buybacks because I know many buybacks go unwanted and it pains me that any '75 Topps card is treated in this way. Those are the ONLY buybacks that I care about. In an ideal collecting world stamped buybacks wouldn't exist and I wouldn't be doing this. But they are so this is my way of making sense out of a nonsensical aspect of collecting.
August 19, 2019 at 8:57 PM

Chris said…
I'm ambivalent about buybacks but I do look for them, mostly for other bloggers. It's tough to see a vintage great like Gil Hodges get stamped like that.

Sean said…
The buybacks thing is something I've never followed, but I'm horrified to discover they are (or were) doing it to actual old cards with some value like that Hodges. I had thought it was just a way to deface junk wax era cards in an attempt to make them worth something. Shocking.
August 19, 2019 at 10:04 PM

steelehere said…
I believe taking previously issued cards and stamping them started with Pacific Trading Cards in the mid-late 1990's. They actually would do to this if you stopped by their booth at the National Sports Collectors convention back then.

Once the idea was let out of the bag, all the other trading card companies eventually copied the idea (whether it was a good idea or not) by putting them in their packs (i.e. 2000 SP Authentic) because original ideas aren't exactly the forte of the product development folks that work for the trading card manufacturers.
August 19, 2019 at 10:50 PM

Billy Kingsley said…
Scoreboard introduced buybacks in their 1996 college basketball set. As far as I know they were the first. Most were autographed but not all were.
August 20, 2019 at 2:03 AM

Jonathan said…
As someone considering collecting all the sets from the 60s, it really bothers me to see any buybacks from the decade. Cards in that condition are hard enough to come by. Why ruin it?
August 21, 2019 at 9:00 PM

Defenders50 said…
Yeah, buybacks of actual vintage and the corresponding stamps should be a Federal offense or something like that- and I don't even collect vintage.
August 23, 2019 at 1:40 PM