Not as amazing but just as useful 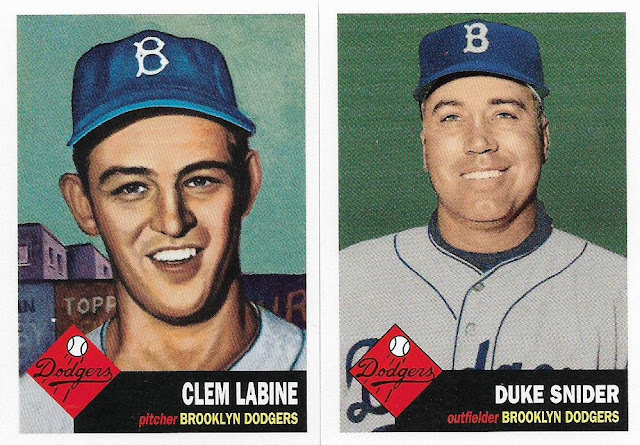 Every time I land some of these 1995 Topps Archives Brooklyn Dodgers cards, I think about how they would have been more amazing to me back in the year that they were issued.

I was barely buying cards in '95. And the stage of my collection was not as advanced as it is now. Many of the cards in the '95 Archives set would have had a great deal of appeal because of that.

Back then, the only original '50s Dodgers cards that I owned that are also replicated in this '95 set were the 1956 Carl Erskine and the 1956 Don Newcombe. So how cool would it be to have a card that looked like the 1955 Jackie Robinson or the 1953 Roy Campanella or the 1956 Sandy Koufax, even if they weren't the actual cards?

So the appeal may be diminished -- I already have a 1955 Topps Sandy Koufax dummy! -- but complete sets I must.

I got a lot closer to finishing off this '95 Archives set recently with a package from The Collective Mind. Either on his way to or from The National, he found a bunch of them at a card shop or two in Michigan. 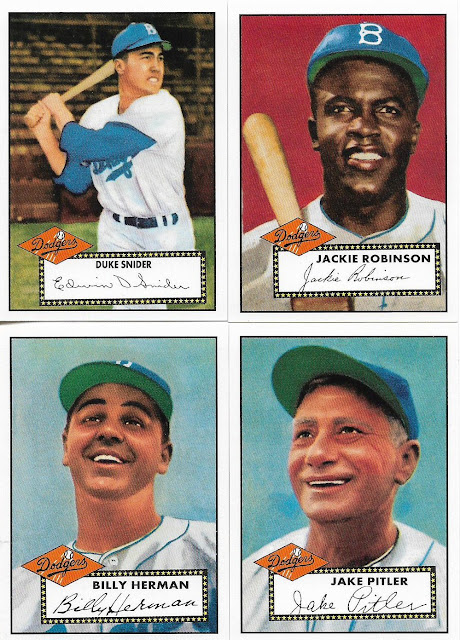 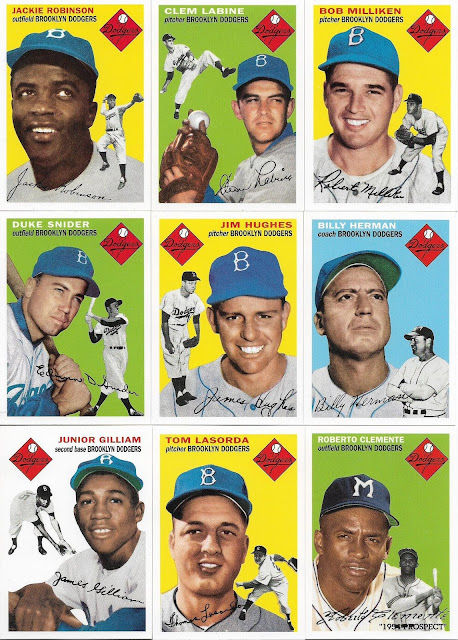 These are the '54s. (Of course, Clemente did not have a 1954 card, Archives plays a little loose with the truth with cards such as that and the "1953 Topps" Duke Snider). 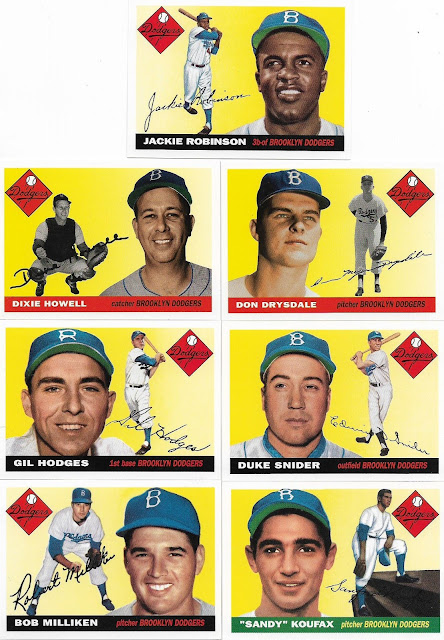 That's a bunch of the '55s, including replicas of the Robinson and Koufax that I have already and some Cards That Never Were, like the Drysdale.

And those are the '56s. I've already completed the actual 1956 Topps Dodgers set and I'm now one away from finishing off the '95 Archives version of the 1956 Topps Dodgers (how bizarre is it that I finished the real versions first?).

These cards from GCA means I'm down to just five cards left in what is a 164-card set (believe me, it seems like there are a lot more than that). The final five:

In the real world, I already own the '54 Hodges and Hoak and the '56 Robinson. The '55 Topps Lasorda does not exist, so the '53 Robinson is the only one that exists that I don't have in actual vintage form.

I should take care of the last of the Archives needs soon, just to be done with the set. It's been a thorn for this Dodger collector for quite awhile.

I also got a few other cards from another set that I want to hurry up and finish: 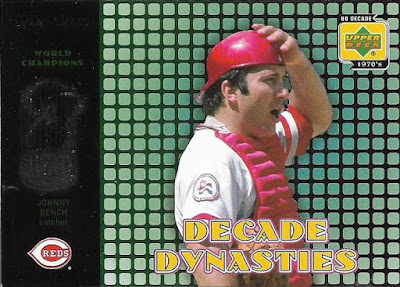 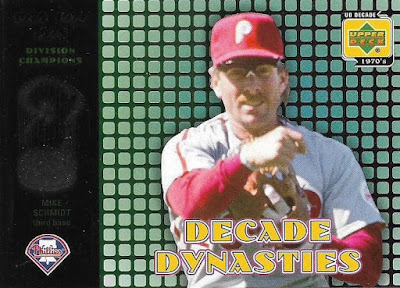 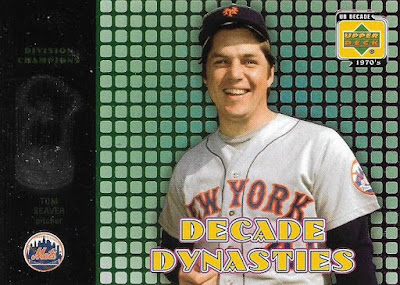 These are cards from one of the last two insert sets that I have yet to complete from the 2001 Upper Deck Decade '70s set. The base set is all done and so are most of the inserts. I just need two more of these Decade Dynasties cards and a handful of Arms Race inserts and then I'll be done with one of my favorite '70s tribute sets.

Still can't get enough of olden days players on newer cards? Here's one more from the envelope: 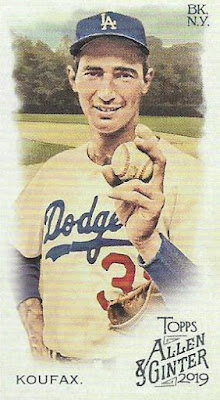 That's my second Dodger mini from this year's A&G set. Kershaw and Koufax (in that order in terms of all-time Dodgers victories) are accounted for.

GCA also found a couple of cards that I already have but will be useful. 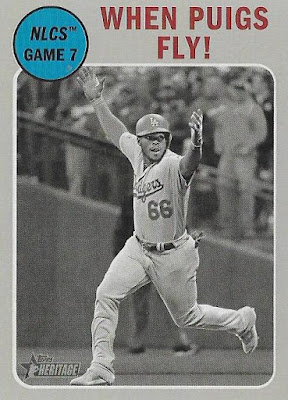 This is my sixth or seventh version of this card. I still welcome any additions to what is still possibly my favorite card of the year. 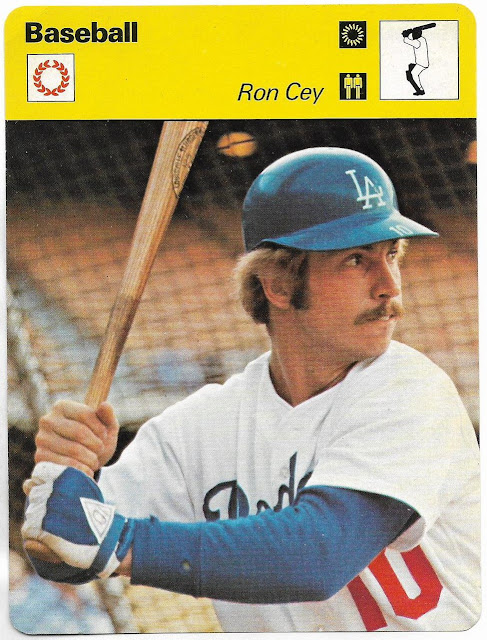 And this is the excellent Sportscaster series card of Ron Cey. I have one safely stored away already, meaning I can put this one on display somewhere in my card room!

I hope to do it in a way so you can see the back of the card because it's quite detailed, as Sportscaster cards tend to be. 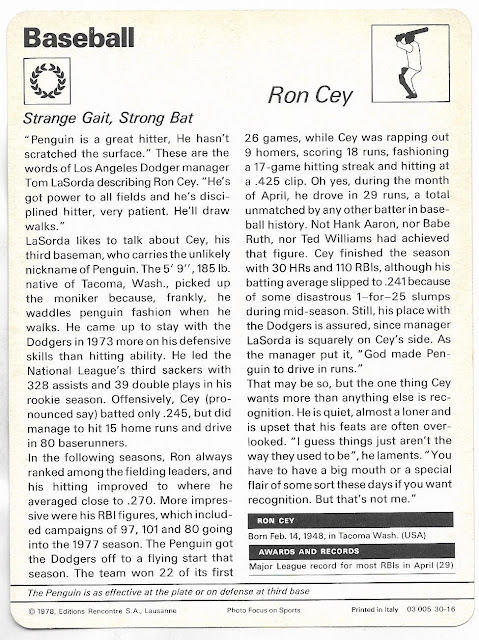 Check out that somewhat bitter Penguin quote at the end.

Man, I loved these cards when I was a kid.

I am always delighted when I can get so close to completing some sets. So, actually, the best time to receive these cards would be right now, when I'm actively seeking them out and trying to complete sets.

Old Cards said…
Funny you should post about the 1953 Archives set. Just this week, I discovered I have this complete set in my stash. Can't remember when I bought it. I also have the 1954 Archives set. Unlike you, I have no originals. The 50's were before time, but I still enjoy the cards and the history they represent.
August 25, 2019 at 9:00 PM

POISON75 said…
As for the Archives Dodgers GCA & I mainly found them in the warehouse in which hopefully he will post in the future about that experience and what it all involved. So you are quite welcome for my expertise in knowing what they were.
August 25, 2019 at 11:49 PM

Fuji said…
A. Love that Cey Sportscaster! Really wish I would have grabbed one of these sets back in the 80's, since they cover so many cool athletes.

B. I purchased this 1995 Topps Archives set (in box form) last year. The Clemente was an eye opener. Never knew he originally signed with the Dodgers until I saw this card.
August 27, 2019 at 1:20 AM