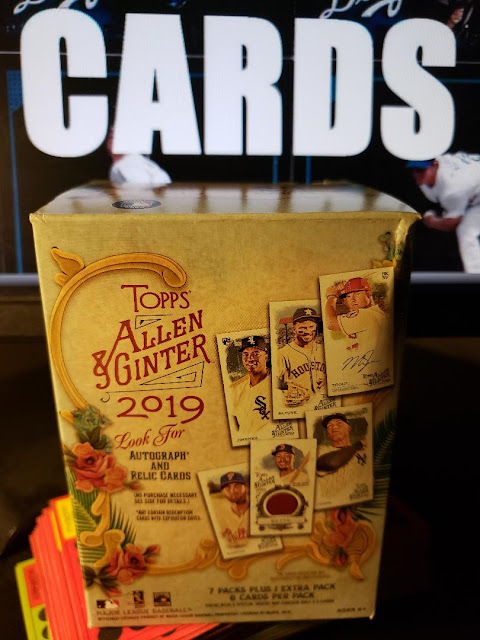 Well, my hope that the purchase of a 1956 Ted Williams card would take care of any impulse buys for awhile didn't really come to pass.

I was doing a little bit of late-night shopping at Walmart yesterday and I figured it would be a good time to check out the card aisle when there isn't a giant line of customers standing in front of it. I got so excited at a clear pathway to the cards that I totally forgot why I was there in the first place.

There really wasn't a lot there of interest. But the Allen & Ginter section was well-stocked so I grabbed what is only my third non-Big League blaster of the year (I don't count Big League since it's half the cost of a regular blaster).

I thought I'd do another round of my Power Rankings posts with this since through eight of these posts I've never done one with A&G.

I think the reason for that is there are lots of non-baseball team cards in A&G and it's not great for determining which teams have the most cards in the box. But let's go ahead and do this anyway.

When we last left Blaster Power Rankings, the Dodgers were starting to run away with it (much like they're doing in the standings right now). But that can't possibly continue. This is ME opening things. You know, the Dodger fan who always pulls Giants or Diamondbacks or Marlins.

So let's see which teams were most represented in this box. 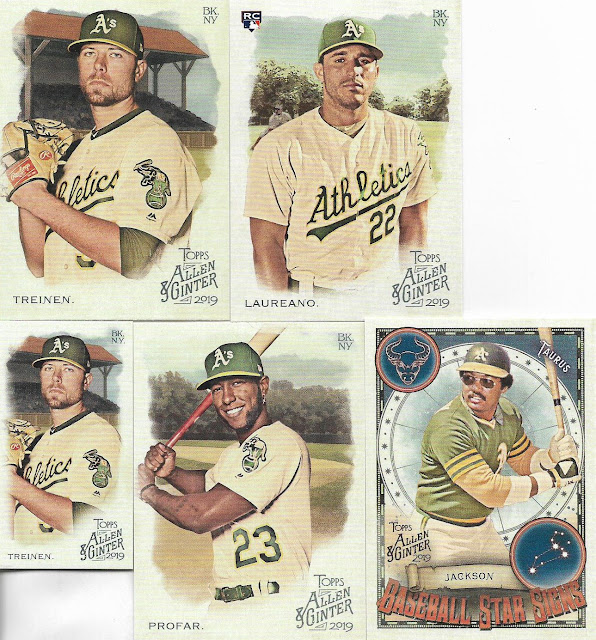 Well, that's different. The last Power Rankings post yielded no A's and I get Blake Treinen and his little puppet friend, too.

Traditionally, I count inserts and parallels against a team in the rankings because the objective of blaster purchases is completing sets, supposedly. But with A&G I'll let it slide because half the reason I'm buying this is for the minis. 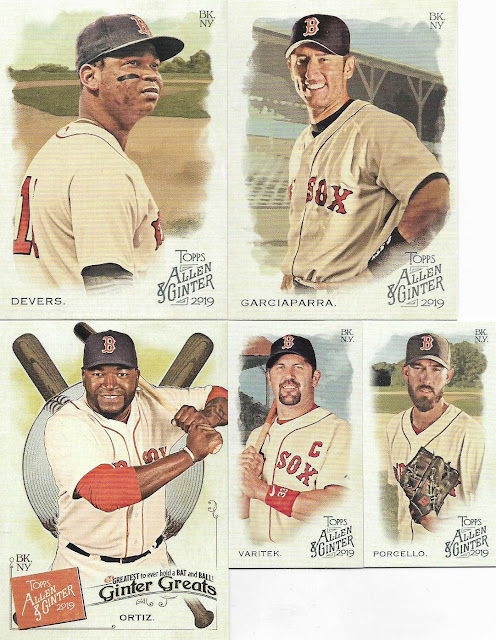 As if there weren't enough Red Sox cards, A&G had to throw in guys like Garciaparra and Varitek. I've complained about this before (and am apparently the only one annoyed by this), but Varitek last played eight years ago. That is not enough time to pass for me to want new cards of a retired someone in the set. Go find Rick Burleson and get him in the set, please.

On the good side, Varitek is the only mini from this blaster that is making my frankenset.

I prefer Reggie as an Oakland A or New York Yankee on my cardboard. Angels cards of Jackson are everywhere. But I just showed Reggie with Oakland earlier so never mind.

No offense, but Buxton looks silly between Carew and Killebrew. 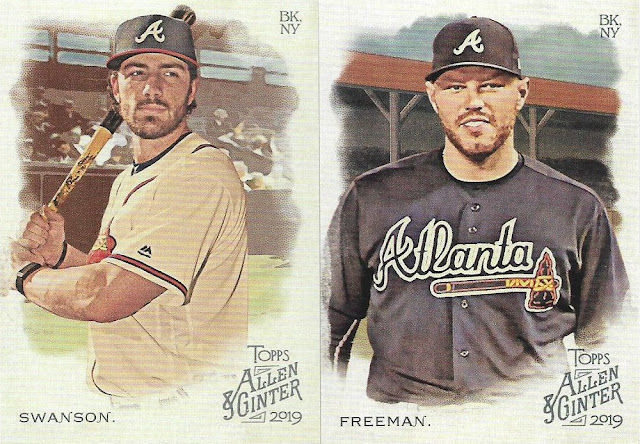 I don't like these guys today. Even less than usual. 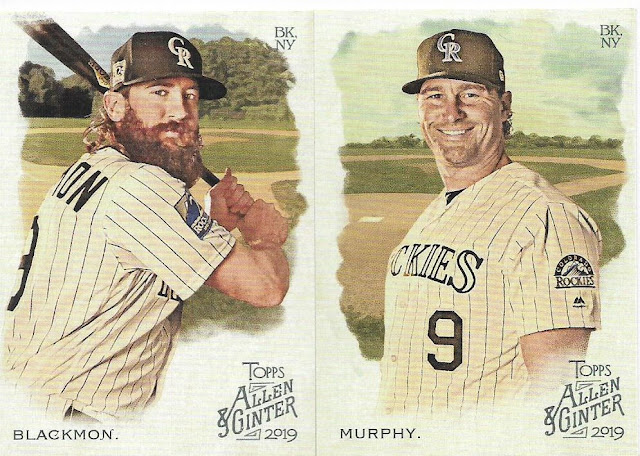 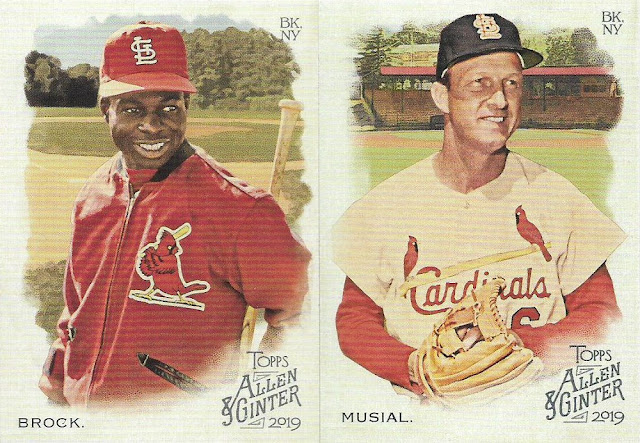 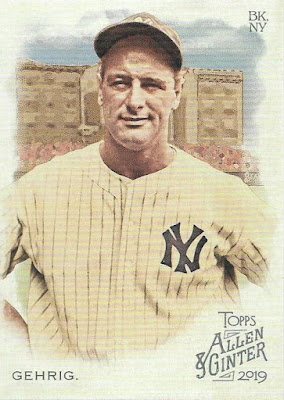 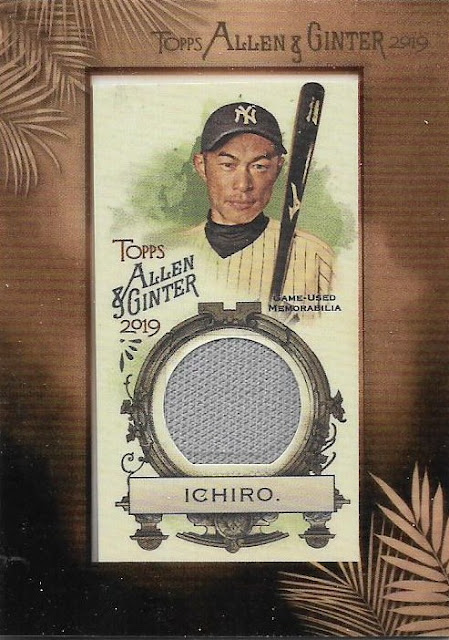 My A&G blaster luck of recent years continues. There are both good and less-good elements of this relic pull, although overall good.

a) It's the rarer framed relics, which should be the only relics in A&G
b) It's Ichiro

a) He's a Yankee. This would have killed me in Gint-a-Cuffs (I once pulled an Ichiro framed relic of him as a Mariner during GAC).
b) A gray swatch? Really? Even this Yankee hater wants a pinstripe. 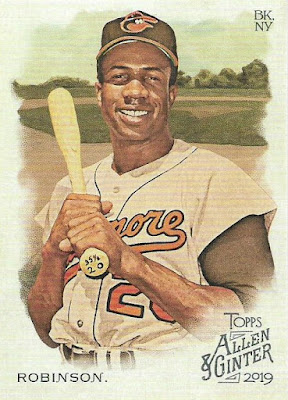 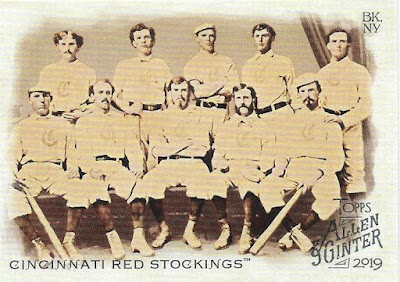 One of my favorite cards in the set. 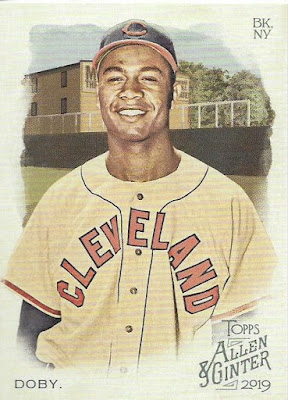 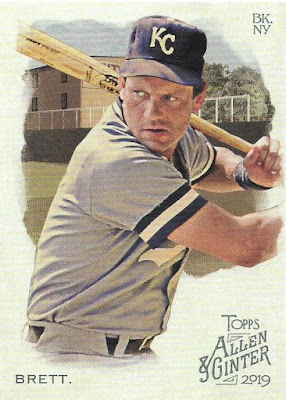 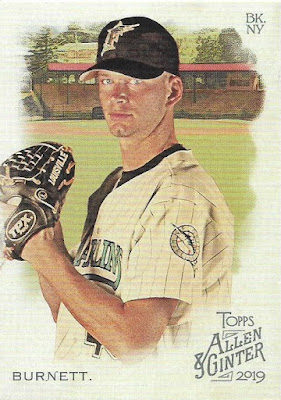 A.J. Burnett stopped playing in 2015. There is no way anybody is wondering when there will be another card of A.J. Burnett. 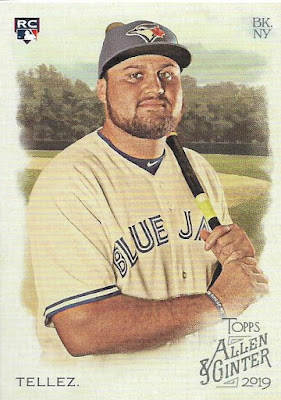 Also, these are the nonsports regular-size cards from the blaster: 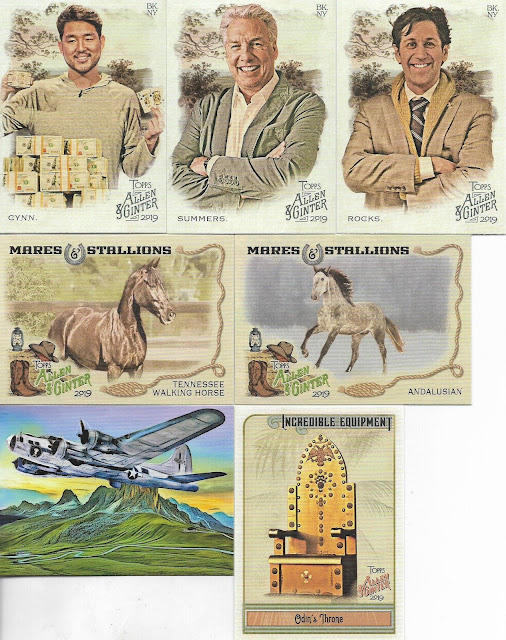 No real excitement there. Let's see the nonsports minis. 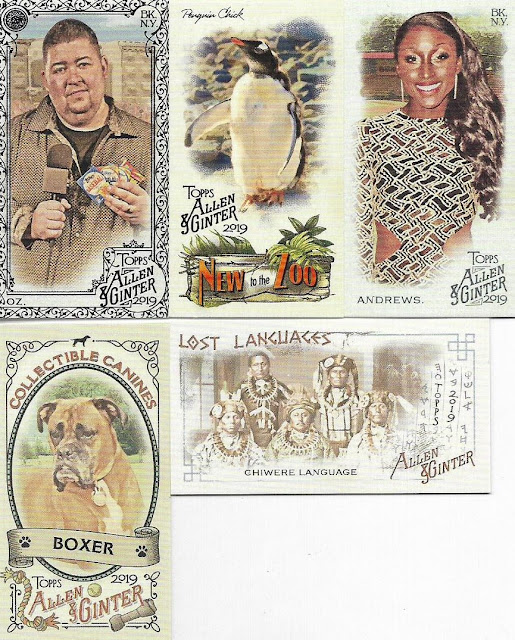 That's a little more interesting. I was quite pleased to pull the Mike Oz card (seeing junk wax packs on an A&G design is rather fascinating).

I wanted to put the Oz card in my frankenset but it shares a number with a card of Bill James, and James is staying put. I'm pretty sure that Topps reserves certain numbers for the same "type" as softball player A.J. Andrews isn't getting in the frankenset either because pool player Jeanette Lee has that spot locked down.

Beyond that, baby penguins and doggies!

All right, now that should hold me from any similar purchases for the rest of the month.

Although I do have to go back to Walmart for the thing I forgot to buy ...

carlsonjok said…
I bought a blaster of A&G and have Turner, Reese, Snider, and mini Kershaw that I'll trade for your Mares and Stallions and History of Flight inserts.
August 16, 2019 at 7:36 PM

Nick Vossbrink said…
Man. With a set like Ginter it's a damn shame Topps can't make a Queen Elizabeth II card every year they make a card of Reggie as an Angel.
August 16, 2019 at 7:47 PM

arpsmith said…
I haven't looked at too many Ginter breaks, thanks for posting as I saw some new ones. I really like the Lou Brock card, maybe my favorite I have seen of the base set. I feel very agreeable with you tonight, I think Varitek being included is a joke, definitely prefer Reggie as an Athletic and I love the Penguin and Boxer card. I have thought about going after the New to the Zoo set but haven't done anything beyond think. Nice hit on the Ichiro even if he is in the wrong uni.
August 16, 2019 at 10:43 PM

Nick Vossbrink said…
New to the Zoo has a Giraffe Calf card and you bet your ass that I'm calling it "Baby Giraffe" and putting it in my Giants binder.
August 17, 2019 at 7:23 PM

gregory said…
I do like the vintage baseball field backgrounds on these cards.
August 18, 2019 at 9:29 AM

Henry Blanchette said…
That Ichiro, pinstripe or not, is spectacular. I can't get enough of the Ginter mini framed relics.
August 18, 2019 at 4:27 PM