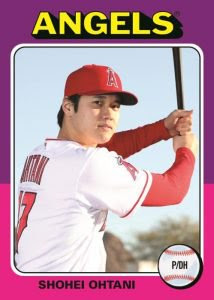 The latest incarnation of the Topps Archives set is due to hit shelves this week.

For months I was uncertain of what designs Archives would use in 2019 or even when it would be released. That's because those announcements came in April, a whirlwind month of Very Grown-Up Problems for me and I totally missed the news.

It takes a lot to get information about a new 1975 tribute past me but it did, all the way into mid-August.

But now we're here and I'm caught up, and I have some decisions to make.

The first one is whether I will attempt to complete all of the cards in Archives that are devoted to the '75 design, much as I did with the set three years ago when it chose 1979. Once again, I have zero interest in the other two designs -- 1958 never impressed me much and 1993? Come on.

I'm undecided on whether I will attempt another partial completion.

Mostly it's because I know Archives will never get the tribute to the '75 design exactly right (I still don't know why Topps does so much better with this in Heritage than it does in Archives). And while that's merely annoying with other designs, it's borderline heresy for 1975. Already, the sample above is giving me the irks because not a single card of a player in the 1975 Topps set with the purple-pink design used black letters for the player's name! There were white letters! ARRRRGH! 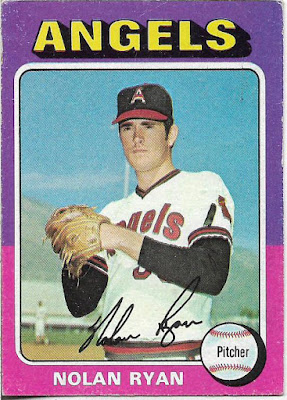 I also can tell the team name width is off, it doesn't cover the width of the top-end of the frame like the '75 cards did.

All right, the second decision I need to make is regarding the extras that always comes with Archives. In previous versions, Archives issued past subsets and inserts, such as 1969 Deckle Edges and the Turn Back the Clock cards as inserts. This year, apparently, there is a 100-card insert set of, uh ... 1975 minis.

OK. I feel people staring at me.

Supposedly this is something I should collect. I once completed an entire 200-card '75 mini tribute insert set that was in 2011 Lineage (the forerunner to Archives). It sits proudly in its own binder. And I've completed the actual '75 mini set, of course.

First of all, Topps describes this particular insert as "limited." This is the usual bullshit where a card company takes the most desirable item -- basically the only element in the set truly worth collecting -- and makes it difficult to finish because it knows fans will throw too much money at it.

So that annoys me and it's enough for me to stay away.

The reason I'm able to stay away so easily -- and ignore the collecting voices in my head -- is that I've already been through this ritual. And that was 200 cards. Also, 2024 Heritage, the set that will pay tribute to the 1975 set, is less than five years away and there's no way in the world it won't have mini parallels. Those will look a lot better than these, too, and if they're not short-printed, I'll have to take a shot at those.

Of course, I'm happy that Archives is finally addressing the '75 design. I was getting a little nervous there, especially with Topps repeating the 1980 and 1982 designs in Archives already. With the addition of the '75 and '58 and '93 designs, here are the designs that Archives has yet to select in its base set:

You can see that Archives has been avoiding the '60s since Heritage has been addressing those designs in the last decade. With Heritage into the '70s now, I expect Archives to snap up the last remaining designs from that decade. Next year we'll possibly see '74 unless Topps finally wants to tackle the '78 design that it seems to find so scary.

But my fears that it found the '75 set too daunting are over so who knows? The appearance of '75 will be enough for me to buy a few packs but there's no way I'll be scouring big-box stores in a mission for limited minis.

Of course, I'll happily take any of the Archives minis that anyone wants to send me.

But I don't expect them to be so super-cool that I won't be able to resist. I WILL RESIST. 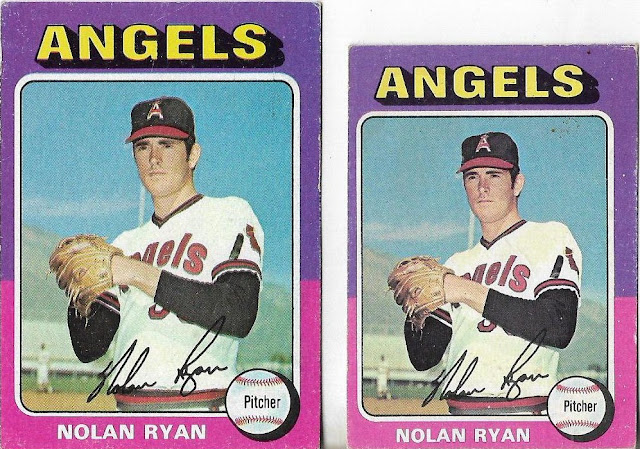 ... I've got cool stuff like this to look at in my collection.

Jeremya1um said…
To think that Topps hasn’t used the ‘62 wood grained design for Archives is crazy to me.
Stay strong with your efforts to not purchase Archives. I refuse to buy any until they either bring it back to the ‘01-‘05 days or turn it into a ‘missing cards’ set.
August 18, 2019 at 9:06 PM

The Shlabotnik Report said…
If this happened another year, it might've been a more difficult decision for me... but I'm just overwhelmed by my collection as a whole right now, so I won't have any problems with letting this slide and maybe picking up wantlist items down the road.

...And I had the same reaction to the black player name. It's possible that the actual cards will be different than these promos, but it does not inspire confidence.
August 18, 2019 at 10:29 PM

Fuji said…
Not sure how (with today's technology) Topps can't get the design down to the finest detail. They have five years to get it right for Heritage.
August 19, 2019 at 12:48 AM

gregory said…
It's weird. I'm sure the designers at Topps are capable of recreating the '75 design precisely. So either they intentionally wanted to make it a bit different, or they were lazy. (I'll choose not to answer that one.) Regardless, I think you're making the right choice, especially if Heritage tends to represent the original designs more accurately.
August 19, 2019 at 8:59 AM

GCA said…
I agree. There must be some legalese buried deep in their contracts that says they can't do the exact same thing more than once. That Ohtani makes me cringe just because of the small details that are off or dead wrong.
August 19, 2019 at 9:19 AM

Steve at 1975BaseballCards.com said…
I heard of these a few months ago and came to the same conclusion. I’m not chasing the whole set, but I will trade anyone for cards with players who played in 75 if Topps makes those for Archives this year.
August 19, 2019 at 11:01 AM