Building 'em up to knock 'em down 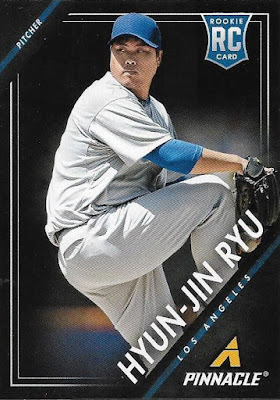 A lot has been happening at Night Owl Headquarters (and the reason that posts continue to be more sporadic than usual).

The creation of the new card room has spurred on quite a few other card-related projects that are occupying my free time. Not only is work continuing on the card room (well, when cash is available), but I've just completed the weeks-long project of updating all of my Dodgers binders so I would have an exact count on how many binders for storage purposes. Current Dodgers binders count: 28.

I've also started the great Dodgers dupes box sort that takes around a month -- allowing for "this is so tedious" breaks, of course. And I've been working on my latest Beckett Vintage Magazine article, which takes quite a bit of research within my own collection.

Finally, I decided to update a couple of my neglected modern Dodgers want lists as well.

The team want lists for 2019 and 2018 are fairly complete for now, or as complete as I want them to be. Honestly, current Dodgers aren't at the top of my collection question these days (explaining why there are still Series 2 base cards I need), but you can't buy a 1956 Ted Williams every day. And the incomplete lists still nag at the team collector in me. It's kind of a tradition to get those want lists out there each year and I've just let them rot.

But also, one of the main reasons to update those want lists is it's so fun to knock them down once you've built them up.

Just a day after making sure my 2019 Dodgers lists were in order, Bru from Remember the Astrodome (spiffy new blog site on the way!), came in and wrecked a bunch of them. Let's see some of the damage. 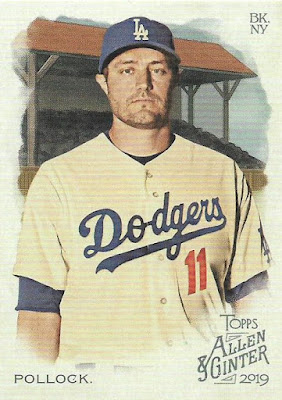 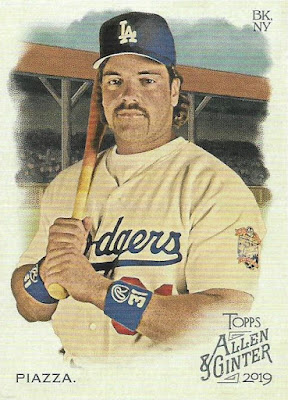 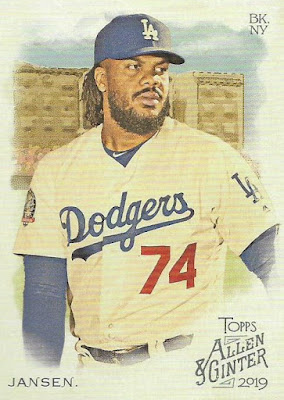 Three from this year's A&G including SP Jansen. I've had very little luck pulling Dodgers from this set so far. 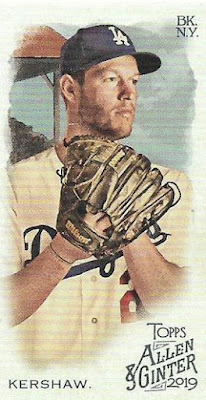 My first 2019 A&G Dodger mini. This feels like real progress. 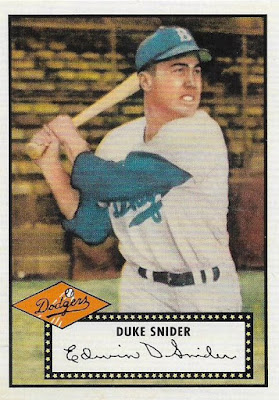 One of those "Icons" inserts from this year's flagship. Topps will never stop churning these out apparently. Updating the wants and seeing the number of inserts climb every year is a reminder of why I neglected my modern-card lists for so long. 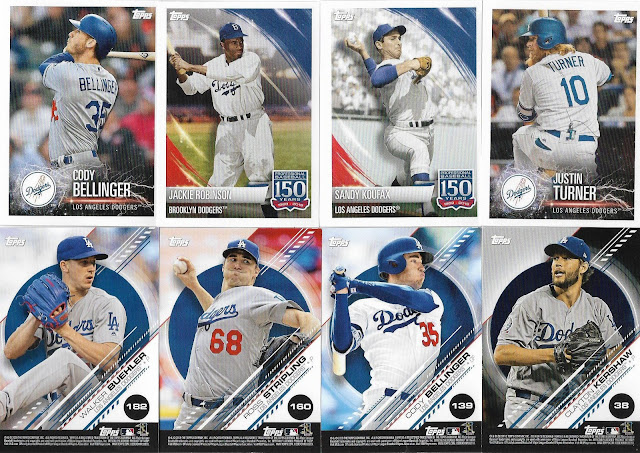 That's a bunch of stickers from this year. One of Topps' best ideas this year is to make the stickers full-size. So much easier for storing (yeah, sorry, I'm not getting the sticker book). Not crazy about having to collect the reverse side but you can get me to do it if they're regulation size. 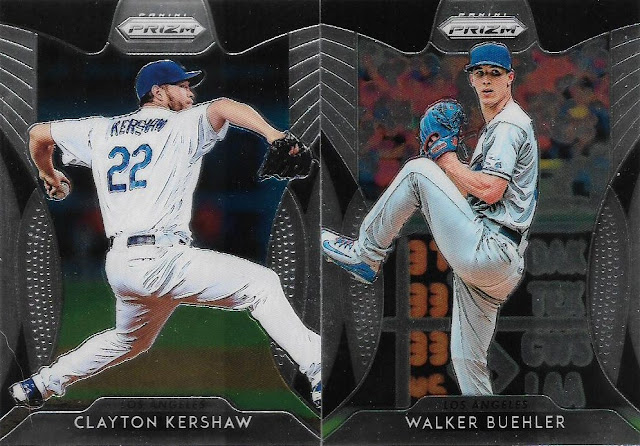 This is how good I was yesterday: I even added a 2019 Panini Prizm Dodger list.

This is about as unappealing as modern sets get, but this year's set is a slight improvement. 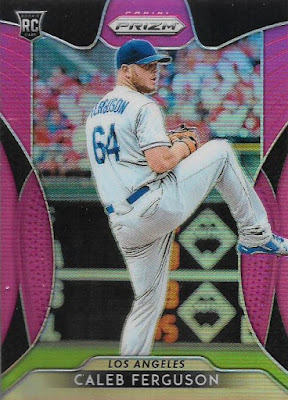 All right, so at about midnight or so last night I was feeling fairly satisfied with my want list progress. Granted, there is still so much to do on want lists from the mid-1990s to about 2009, but at least I had everything that's on store shelves.

Companies had the gall to release sets during May and June when I was barely paying attention to cards. 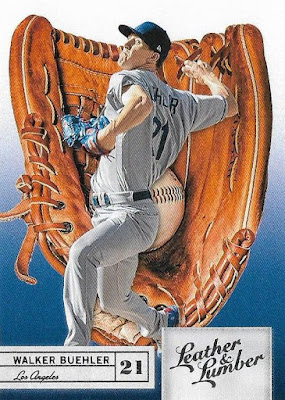 Did you know Panini revived the Leather and Lumber set in May? No idea.

So when Bru sent some cards from that set I had to scramble: first to figure out what it was and, second, to update the update to my 2019 lists! 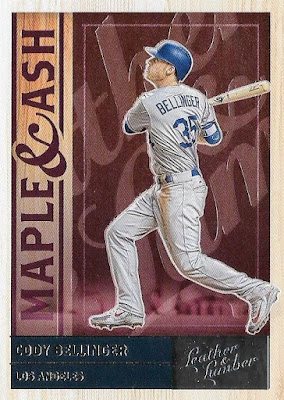 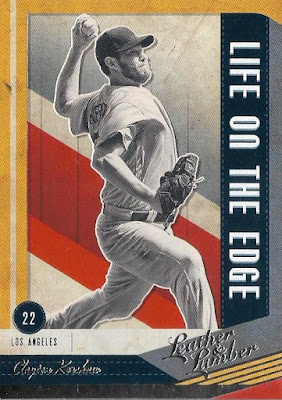 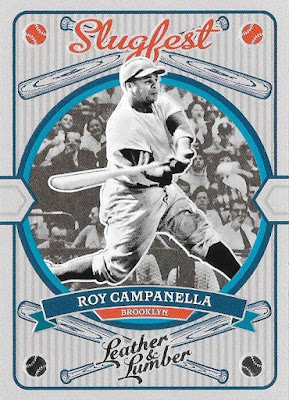 Leather and Lumber is like so many Panini sets these days: a handful of base cards and then endless inserts and relic and autograph cards. The inserts are fairly nice (see the 3 cards above), but I can't get into chasing sets like this and you have to buy a hobby box to get anything diecut. 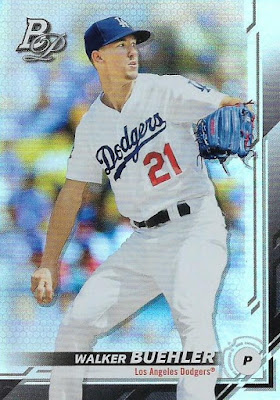 Somewhere near the end of June, Bowman Platinum came out. This got past me, too, and I scrambled again when Bru sent a few Dodgers from the set. 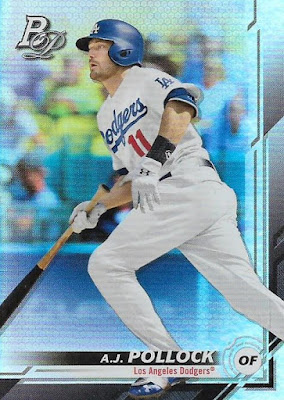 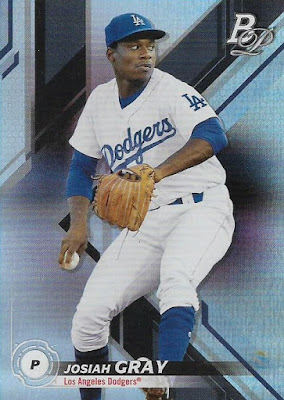 Another set where I say: just the Dodgers, please.

Beyond the 2019 cards, Bru slipped in a few earlier Dodgers that will make the collection. 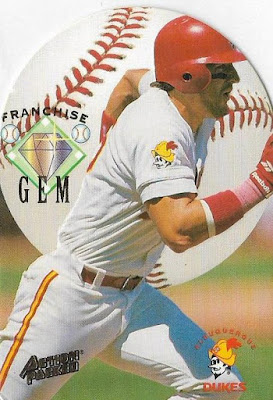 Did you know diecutting was going on with Action Packed? I didn't. This is former '90s big-time prospect Billy Ashley. They can barely fit him in the frame. 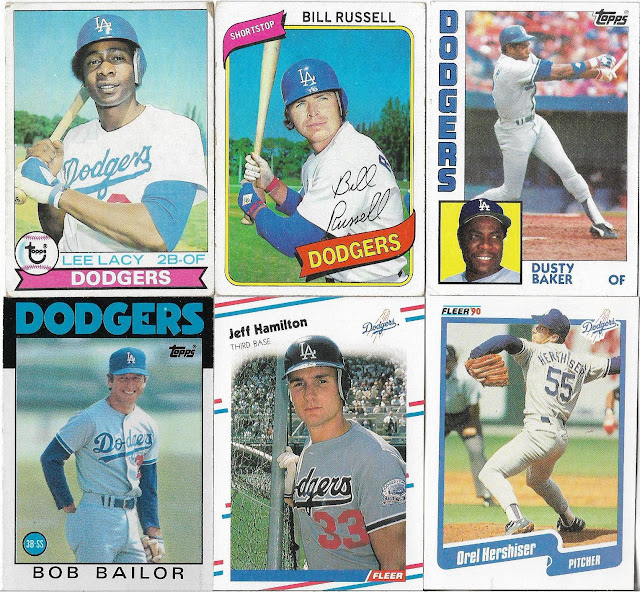 And then, finally these.

When I showed off my new binder shelf with cards in the binder spines to indicate each set inside, I got a lot of questions about the reasoning behind each spine card. There was no reason. I just threw a dupe in there that I knew wouldn't be a need down the road.

That means the spine cards are filled with Giants and Indians and Blue Jays and such. Bru apparently thought they should be filled with Dodgers. You know, cuz I'm a Dodgers fan.

I had never thought of that.

And now, once I did, I can't think of anything else. They SHOULD be Dodgers.

And in that case, the above cards weren't necessary. You don't want to know how many duplicates I have of each of those cards. There is plenty to choose from in the dupes box.

I should know. I'm in the middle of that project.

Johnnys Trading Spot said…
Those Leather & Lumber and the Bowman Platinum (retail boxes) are through the roof price wise. I priced them a couple of weeks ago like $90.00 (I think) at Walmart. Over a buck a card! So the stars probably priced way up there.
August 7, 2019 at 8:39 PM

CrazieJoe said…
Didn't know about the Leather & Lumber coming back - I'll have to take a peek, though not sure how accessible they will be at this point (both finding and from a price point perspective).
August 7, 2019 at 8:57 PM

Fuji said…
Bru is a genius. 28 binders worth of Dodgers cards? That frickin' impressive. Keep up the hard work.