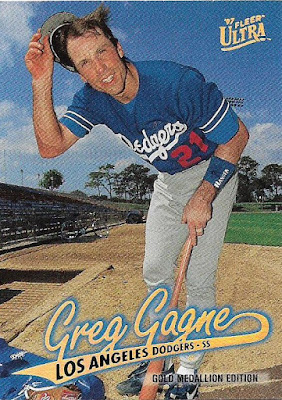 I'm into year eight of Night Owl Cards and I'm still coming across experiences that I never knew possible.

For instance, a few days before Christmas, a very large package arrived in the mail. It was from Greg of Nearly Mint, who is one of my tightest acquaintances on Twitter (@grogg is currently collecting the 1974 Topps set, by the way). I knew that he was preparing something impressive to send me. I just had no idea how impressive.

What came out of that box was an entire baseball card binder. In the last eight years, I have never received a binder in the mail ever -- not even an empty one, let alone one filled with baseball cards. 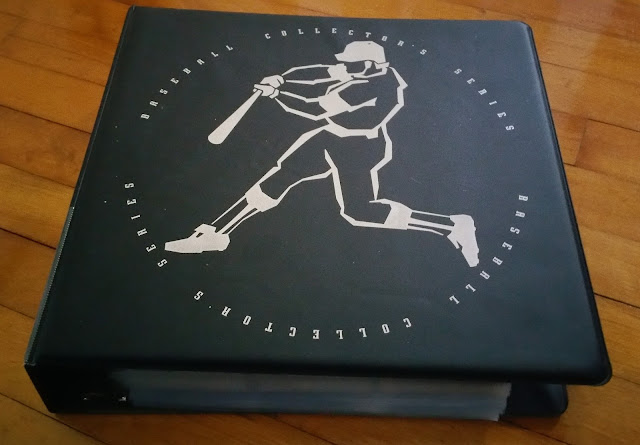 But that's exactly what it was.

I was so taken by it that I didn't even think about the cards at first. My first thought was: "Cool! A new binder! I NEED one of those!

Then I started to open it and take in the variety of cards contained within.

It occurred to me that it was much like a storybook -- in cardboard form -- as I turned page by page.

I'm going to show you each page. But I've decided to split this post in two. Normally, I don't like doing that. I am not scared of long posts, and I believe that if there is a large tale to tell -- whether it's my experience at a card show or a very impressive package -- I should spill it all at once, so people can absorb the awesomeness in proper perspective.

But I think I've got to keep in mind this year that people just don't have the time sit at their computer and devote 20 minutes to a single post.

So we'll consider this Part 1. Hopefully I'll interest you enough that you'll come back tomorrow for Part 2. 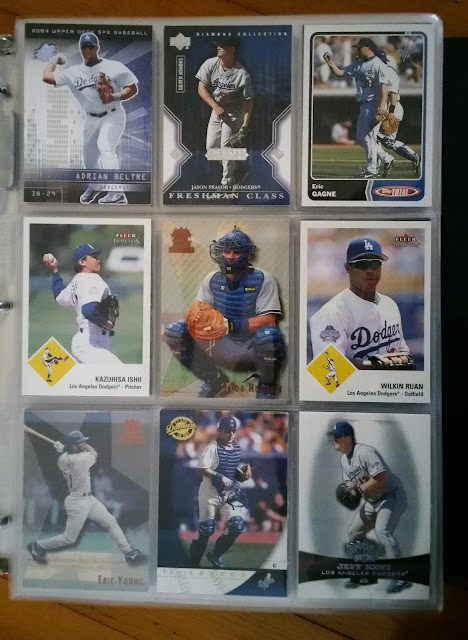 The first chunk of this binder -- really about half of it -- were Dodger cards that Greg obtained after signing up for one of Thorzul's group breaks.

Isn't that magnanimous? He signed up for the break not for him but for me! It was good thinking, too, because group breaks kind of spook me. I have to know I'm going to get a lot of cards that I need before diving into a break. And I wasn't sure about this one.

But I can tell already by the first page that there are cards that I need there. It's stuff from the early 2000s, Fleer Tradition and Topps Stars and Total. In other words, cardboard that debuted when I wasn't paying attention. 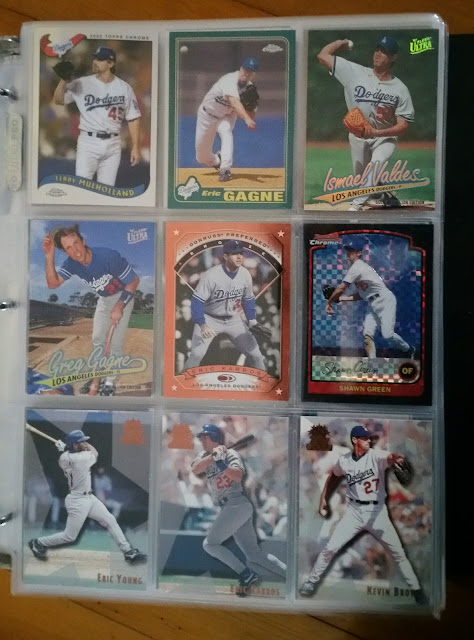 More late '90s/early '00s items. Greg said I'd have to go through those and see if I needed them. And I've started to do that already. Unfortunately, I have such a vague idea of what I need from the '90s/'00s period that I'm going to have to do this a couple of times before I get it right. 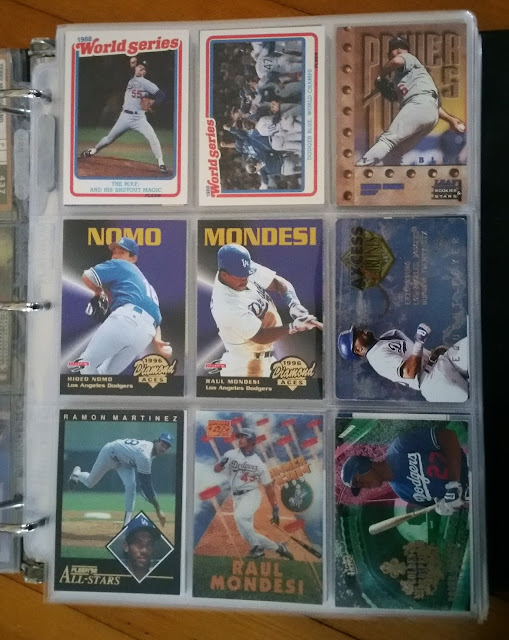 Some pretty good '90s stuff here -- although most of it I have. One thing that hit me as I turned the pages is the sheer variety of '90s cards. It's nothing I didn't know already, but it is very impressive when it's scattered throughout a binder. 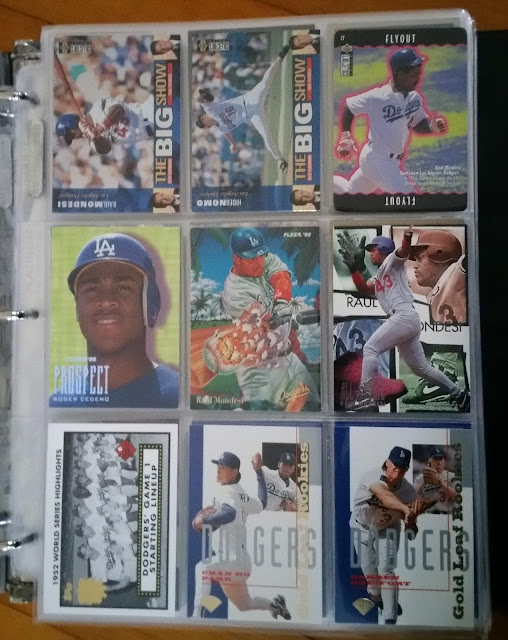 More '90s, for the most part. Always loved the Mondesi deteriorating baseball card. 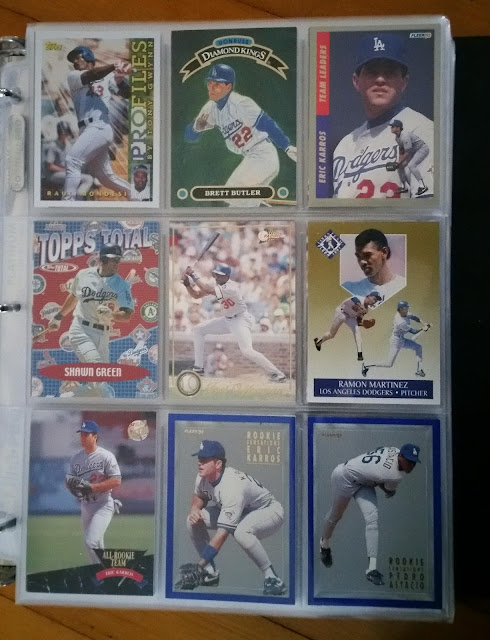 Several of these go back to the early '90s, when we were just getting an idea of how insane the decade would be. For someone like me, who soon got intimidated by all the choices and eventually stepped away, things were still manageable at this point. 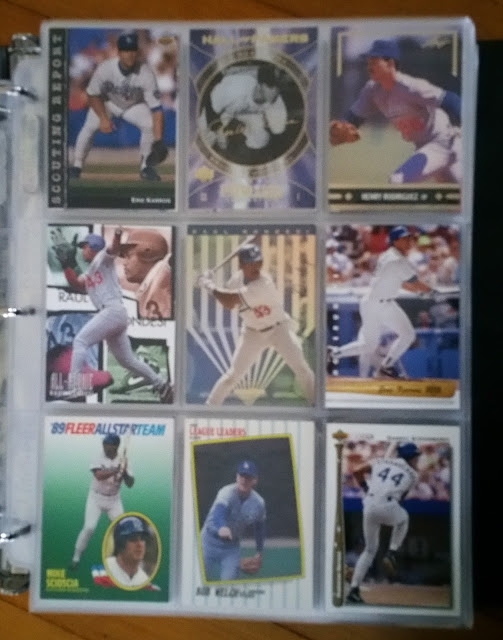 This page is notable for two things. First, the Bob Welch card in the bottom row at the center is a card I did not have. I was reasonably certain I had obtained almost all of the Fleer boxed set Dodger cards and now I don't know what is out there! Curse you Storybook Binder!

The other card had to be taken out of its page to display the full effect. 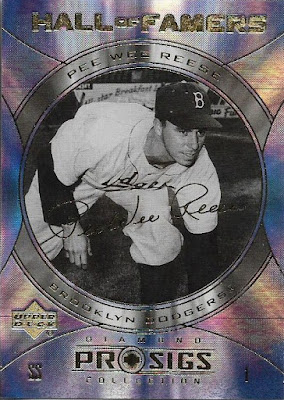 Pee Wee Reese never knew he could be on a card so shiny. 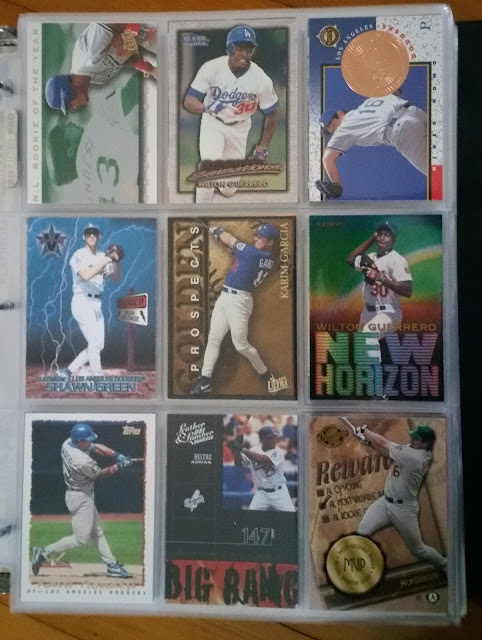 We're still in the cards that came from Thorzul's break. I guess I should hop in one of those someday, huh?

I was so entranced by the Shawn Green High Voltage card (this is the kind of concept that needs to be on cards more often today. It's not that difficult to come up with stuff like this), that I missed the Big Bang Beltre card. Sure, the photo is tiny, but BIG BANG! 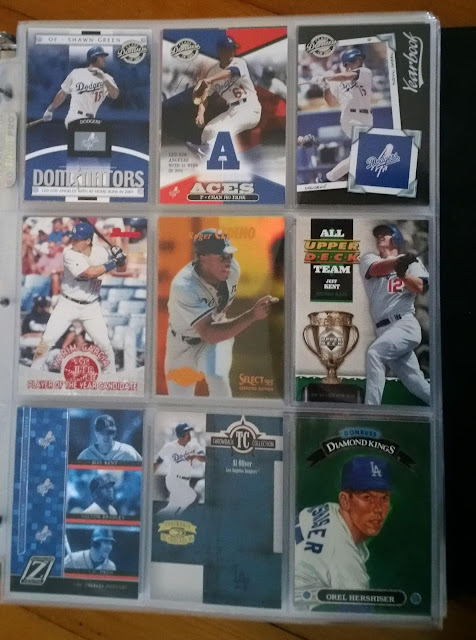 I like the Donruss cards on the top row quite a bit, particularly the Chan Ho Aces card and the Shawn Green yearbook card. Donruss stepped up its game at the turn of the century. Unfortunately it didn't last.

The other card that I like is so good that I took it out of the binder. 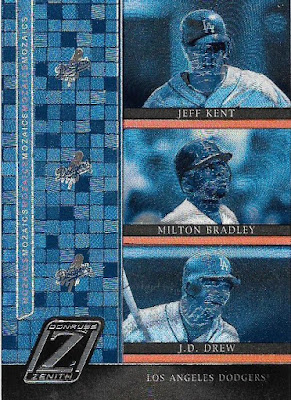 I am on record as adoring shiny blue stuff. It was only after I scanned this card that I became horrified by the trio presented. Could Donruss combine three more unlikable Dodgers than these on one card? 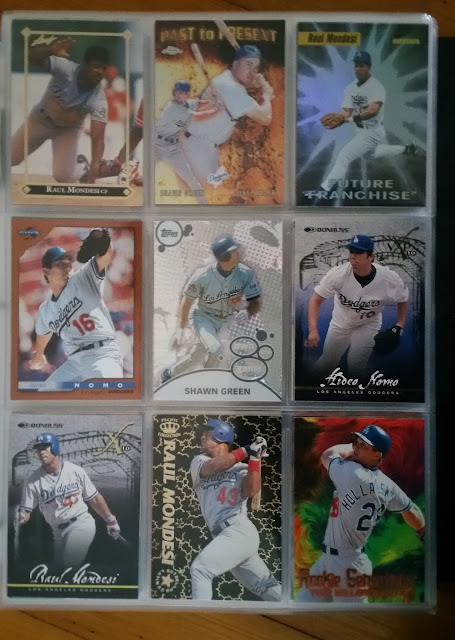 Here is where that period of 1995-2005 was in full effect. Card flashes going off in my eyes everywhere. I am partial to the past-and-present card in the top middle. 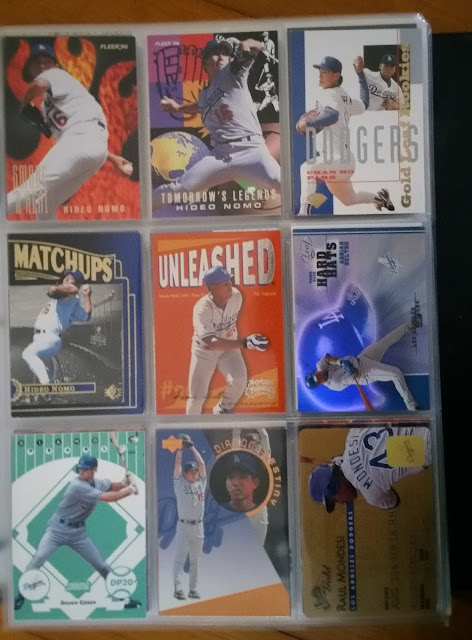 You don't get a whole mess of '90s Dodger cards and not add to your Hideo Nomo collection. There are several here that I own already, but one I did not. 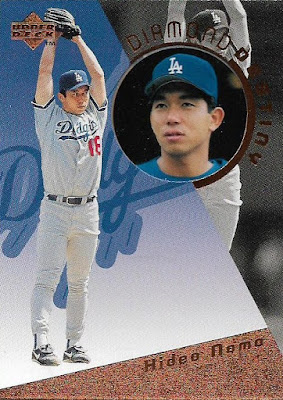 Nomo's face in the circle only appears if you shine light on it. Normally I'm not crazy about tilting my cards to get the effect, but this is original enough for me to make an exception. Besides, it's Nomo. 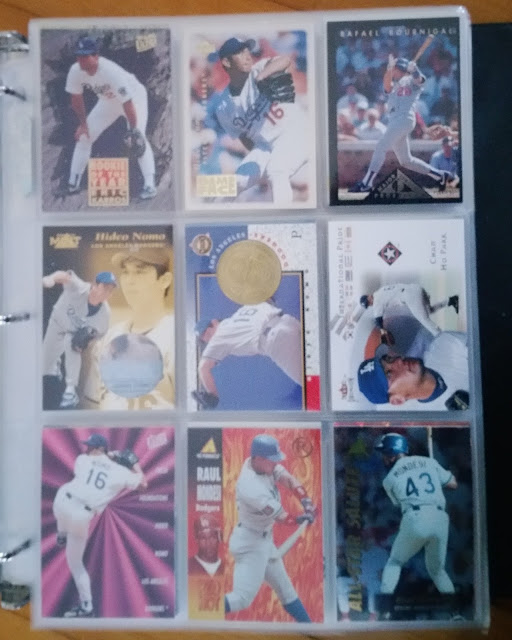 A lot more Nomo on this page. 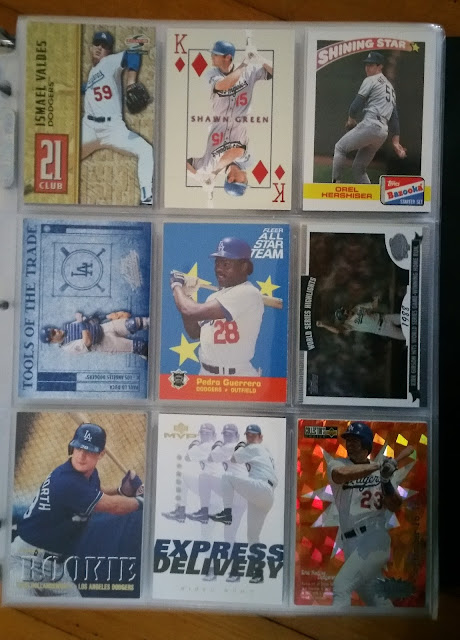 This is the last full page from Thorzul's break. That Todd Hollandsworth card in the bottom left corner is singing to me because I know I didn't have it. 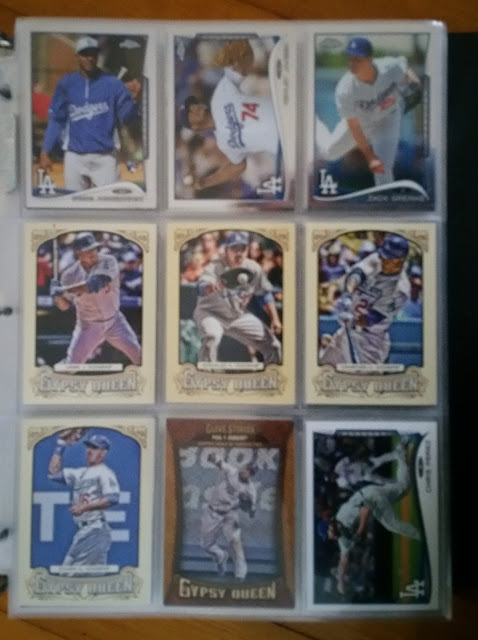 The middle part of the binder featured more modern cards that targeted my wants. Greg ventured into my Gypsy Queen wants from 2014, which are very extensive because nobody likes Gypsy Queen. Also, you'll note in the corner the elusive Chris Perez card from 2014 Topps Traded. It didn't take long for that to disappear off the Nebulous 9. 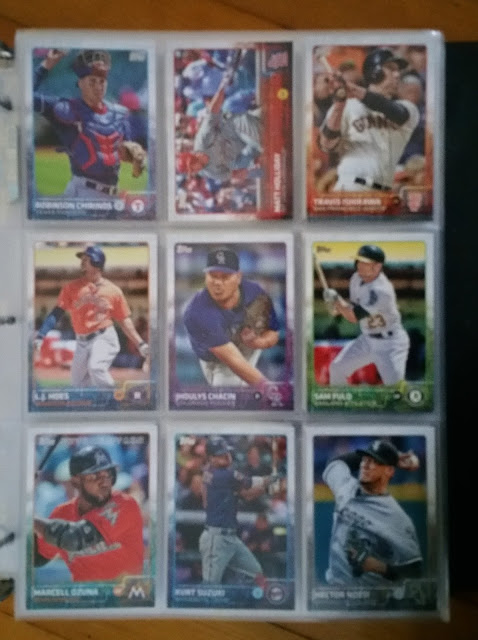 I didn't take a very clear photo of this, but I think you can tell these are Series 2 wants from 2015 Topps. I am 27 cards away from finishing Series 2, thanks to Greg.

And this is where the storybook binder takes a break for intermission.

That's already some good stuff there -- and already a much longer post than I intended -- but we're only halfway through.

And we haven't even gotten to this card yet: 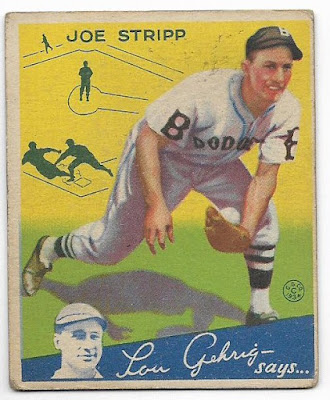 I hope you'll come back tomorrow.

Section 36 said…
I'll definitely be back. I can't imagine how cool it must have felt to dive into that the first time. Looking into the great unknown.
January 5, 2016 at 8:06 PM

Unknown said…
A great looking binder you have there. Looks like hours of admiring and sorting are in your future. I cannot wait to see what else pops up in your binder.
January 5, 2016 at 8:20 PM

JediJeff said…
I always thought Jeff Kent was a total douchebag, who more than likely juiced up to get anywhere near the numbers he garnered. But I love this recent Deadspin article about this yaer's HOF ballots:

And the comment by the sportswriter in question (Marty Noble) that obviously needs to lose his right to vote when he only votes for two players, Junior and Kent, claiming Kent is "the Babe Ruth of second basemen".
January 5, 2016 at 8:52 PM

beefman said…
What kind of fool would NOT be back tomorrow?!

BaseSetCalling said…
Who's on the Unleash the Wheaties card in the center of that one page?

Great card though for a weird reason. And there just aren't a lot of orange baseball cards. There must be a story behind that one...thanks storybook binder!
January 5, 2016 at 11:46 PM

BaseSetCalling said…
saw that and thought it must be a case of writing enhancers gone wrong or something
January 5, 2016 at 11:47 PM

BobWalkthePlank said…
The Hall of Fame voting is a total sham. I saw that article too and wanted find that voter and punch him in the stomach.
January 6, 2016 at 8:01 AM

Tony L. said…
Great cards and great binder...so far...how's it end? Does the guy get the girl? Do they walk off into the sunset?

beefman said…
My 1995 Topps Mondesi looks nothing like the one that you have on the bottom left of the 10th photo - that must be a different kind of oddball card. I'm off to do some research on it now!
January 6, 2016 at 2:32 PM

Fuji said…
I kept imagining these were filled with Oakland A's cards... and it took me back to my middle school years when I had dreams of Phoebe Cates. Great stuff (especially that Nomo Diamond Destiny card).
January 6, 2016 at 10:40 PM