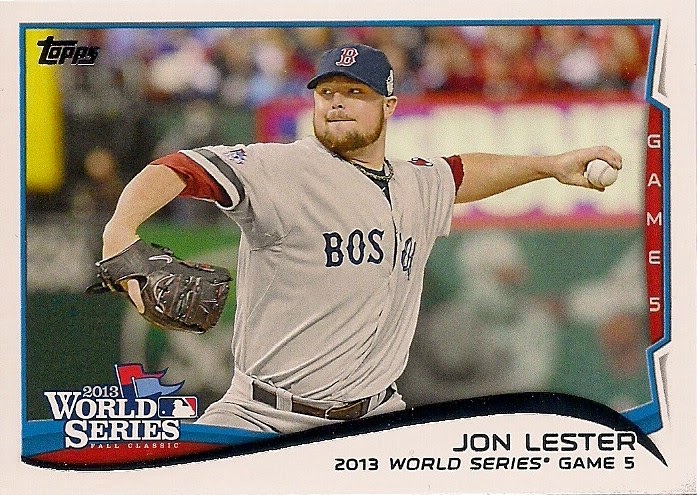 I'm hoping people can clear something up for me since I no longer attempt to complete current Topps flagship sets.

Has Topps returned to the days of representing every game of the previous World Series with a card? That would be welcome news.

I have to ask because ever since I noticed this possibility -- with the 2012 Topps flagship set -- I haven't been able to come up with an answer because I don't have all the cards in the set ... and I'm too lazy to look it up by other means.

So I'm hopeful, but also cynical.

This is what I have from this year's set, including the Jon Lester Game 5 card. 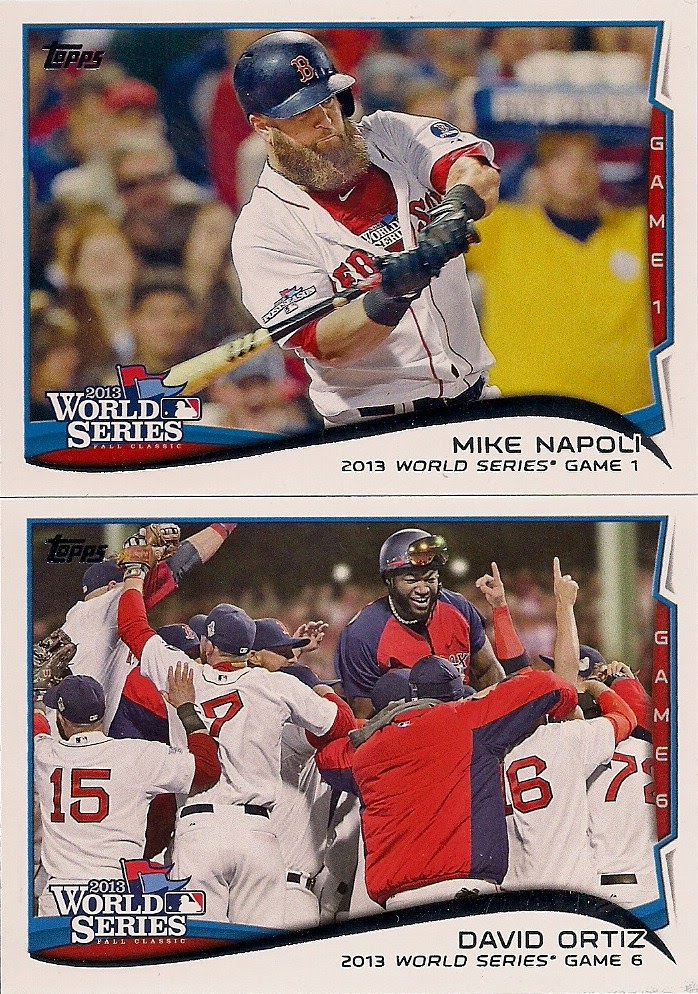 If that's the scenario, that's a bummer. Because I've been longing for the days of a card for each World Series game for a long time.

This isn't a recent development, of course. Topps has been very sporadic in its history on whether it features cards for each Series game or even whether it recognizes the previous World Series at all.

To me, you can scream about squirrel cards and parallels all you want (and I have), but the most blatant issue I have with Topps during its illustrious history is its inability to fully recognize the World Series each year.

Come on now, this is the biggest event on the baseball calendar. Every year. Guaranteed (well, except 1994).

But Topps didn't bother with World Series cards through much of the '50s. Then it rightfully created cards for each game in the early 1960s, ONLY TO IGNORE THE DODGERS' WORLD CHAMPIONSHIP COMPLETELY IN THE 1966 SET (good luck, 2014 World Series champion, you're going to get stiffed in 2015 Heritage).

And so it's gone. Fantastic World Series subsets in 1969, 1970 and 1971 Topps. Half-assed years in the late '70s with just a card or two for the Series. And then the years in which World Series champs were whitewashed from history.

The 1979 We Are Fam-i-lee Pirates? Try to find them in the 1980 set. 1981 Dodger blue champions? No recognition in the 1982 set. In fact, for much of the 1980s, the World Series didn't even exist according to Topps. How is it possible that there was no World Series cards in the 1987 set after one of the greatest World Series of all-time?

Granted, I started collecting in 1975, a year in which there was a card for every Series game, but I don't think it's that difficult to do. I love chronicling baseball moments, and I think a full Series subset would give every flagship set a boost.

But instead we get multiple cards of individual players, which mean nothing to me as a collector.

I am a Dodger fan. I like Yasiel Puig. But I am 100 percent honest when I say I need only one Puig card in each set. That's all. I'm not going to burn all my cards on the front lawn and invite the media to take pictures if there isn't half a dozen Puig card in the set. He's one man. He needs only one card.

Now, if there actually are six cards, one to represent each 2013 World Series game in the 2014 flagship set, then I apologize for my ranting.

But I doubt it.

Next year, after the Dodgers win the World Series, I would like to see a flagship card for ever Series game -- even the ones that the Dodgers lose (not that they will lose any).

Make me appreciate the 1966 set for once.

Night Card Binder candidate: Jon Lester, 2013 World Series Game 5, #206
Does it make the binder: It does. Wish I could put every Series card in the binder.

JediJeff said…
Where are the World Series cards for the Cubs? Oh riiiiiiiiiiiiiiiiight.
March 16, 2014 at 12:55 AM

night owl said…
The good folks on Twitter confirmed there are only WS cards for games that eventual winning team won.
March 16, 2014 at 1:59 PM

Zvon said…
I'm late to this thread (ha, way late). I was linked here from your post about night world series cards. I'm a HUGE fan of World Series cards ever since I was a kid. I only wanted two things out of baseball card packs most seasons (this was before the rookie boom in the mid 80's) and that was all the Mets cards and all the World Series cards. Well, and certain favorite players, usually All-Stars (like Brooks Robinson). Like you, I was appalled when they stopped making World Series cards. But over the years Topps has done many stupid things so it doesn't surprise me.

I make custom World Series cards every chance I get, mostly Mets, but I'd do em for all the years Topps hasn't if I had the time to. And maybe I'll make the time. I've made one for 1954 (Willies catch) and one for each game in 1972 (Orioles/Pirates-I know Topps did this in '72 but that was one of my favorite subsets so I did it anyway with different pictures that what was used). Oh, also a 1971 Topps remake of World Series game 5 with Brooks Robinson's classic catch. Topps real version used a wacky picture of the catch which makes Brooks look like he's crawing thru the desert.