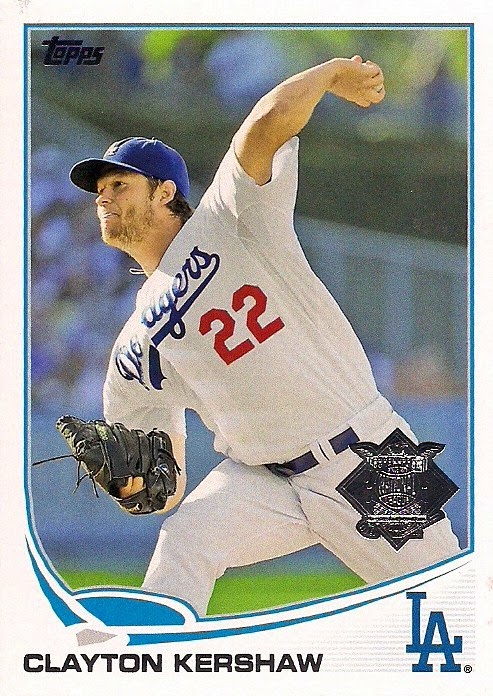 I have been asked more than once since the starting pitcher assignments for the All-Star Game were announced how I feel about Clayton Kershaw being passed over.

It doesn't bother me. I knew that Mike Matheny would select his pitcher, and I even pointed it out to a co-worker last week who had assumed in his column that Kershaw would start. Honestly, who cares? Kershaw will pitch somewhere in there, that's all that needs to happen to make me happy.

But I'll tell you when it would have bothered me.

It would have bothered me between 1975-81. That was when Topps honored the previous year's All-Star starters with a specially treated base card. If Kershaw had the chance of receiving a star on his card and then didn't, I wouldn't like that at all.

Cards were different then. I've already called the years between 1975-81 "the Golden Age Of All-Star Cards" and featured a countdown of the best a couple of years ago. During that time period, pulling the base card of an All-Star was a treat, above and beyond merely pulling a star player's card. The star or badge or bar made the card even more special. I was truly star struck in those days, even if I hardly am now.

One of the things that I always wanted to do during those years was gather all the All-Star cards together so I could see them all at once. I know during the 1980s, seeing all of the All-Stars grouped together in a set was no big deal because Topps produced extra cards of All-Stars then and numbered them together. If you order your set by number, all the All-Stars are together.

But between 1975-81, Topps didn't do that. The All-Stars are spaced throughout the set.

So, in honor of tonight's All-Star Game and the fact that I have completed all of the Topps sets between 1975-81 since the last All-Star Game, I present all of the All-Star cards together. With appropriate commentary, of course. 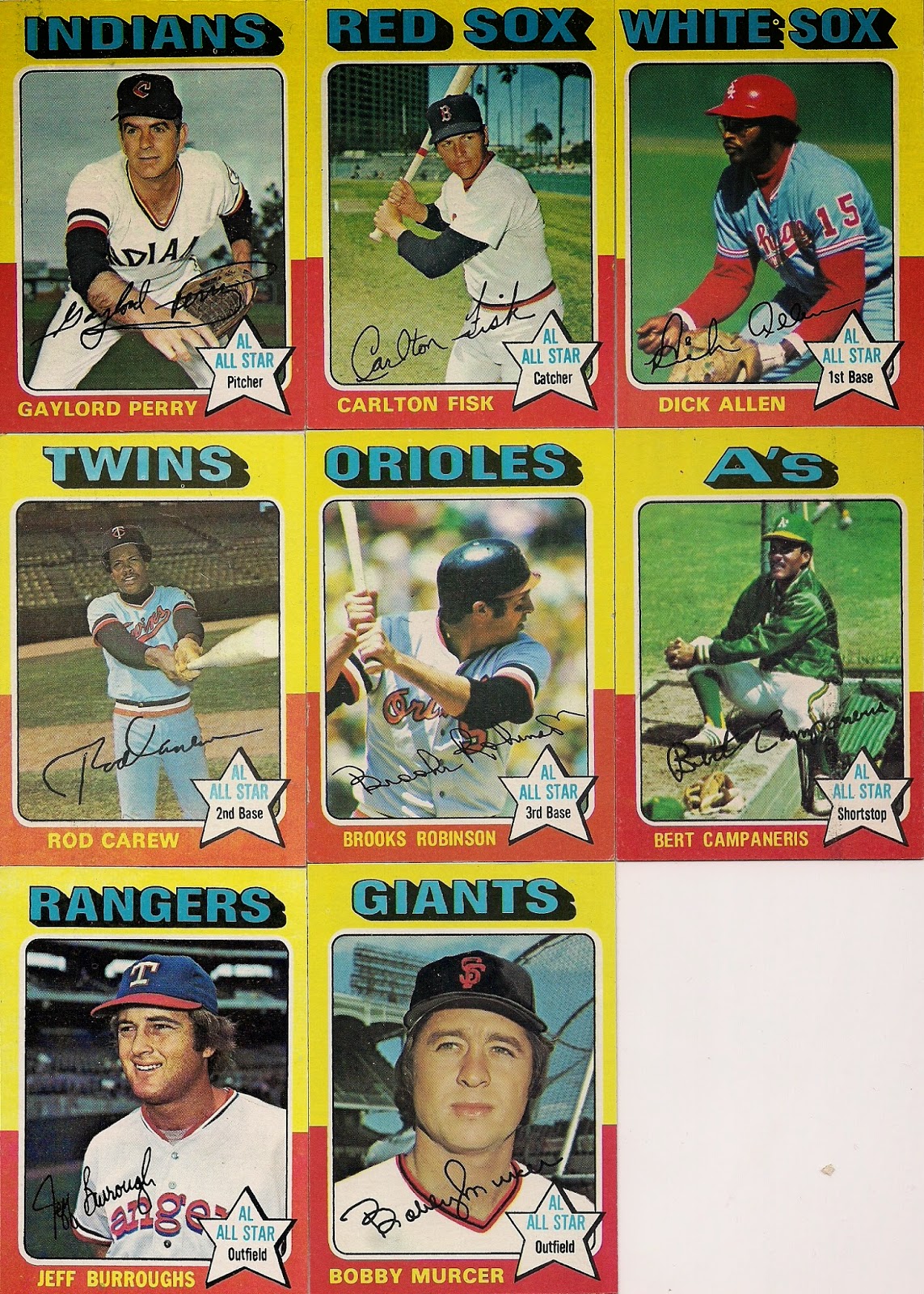 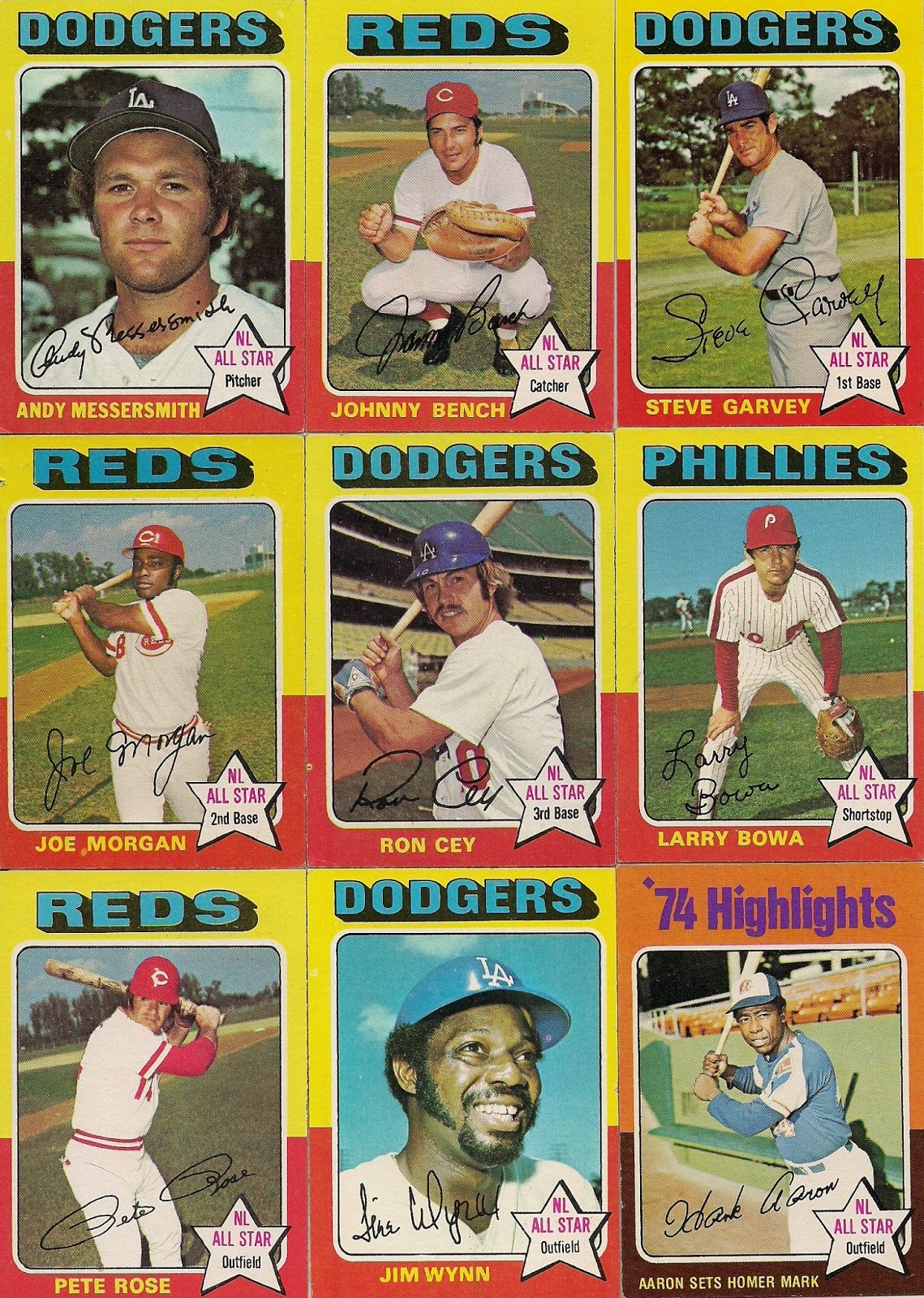 The American League set is only eight cards because it is missing Reggie Jackson, who did not get the All-Star treatment in what I consider one of the biggest card gaffes of all-time. How can you not put Reggie in yellow and red? The National League is a glorious ode to the Dodgers and the Reds (Larry Bowa looks a little out of place). But placing Hank Aaron's star on his orange and brown Highlights card is jarring.

Also, for you newbies out there, yes, Bobby Murcer is listed as an American League all-star (because he was in 1974) but with a National League team. The '70s were a wild and wacky time. 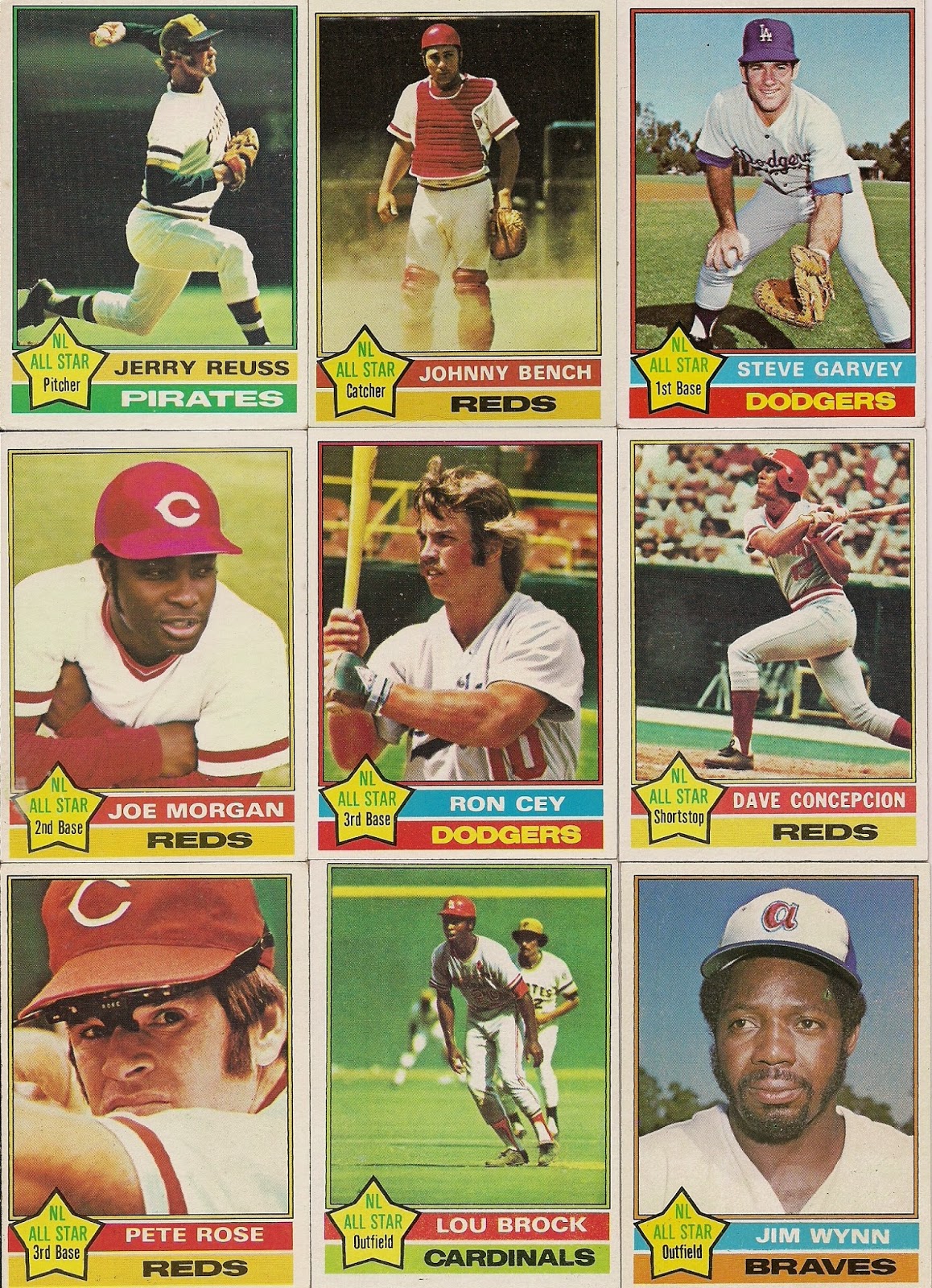 I love the yellow star, and some of the greatest '70s cards of all-time are featured here (yes, I will get to that countdown someday).

The American League is packed with A's (and Yankees). Minnesota Twin Rod Carew is the lone holdout. It also features the two All-Stars that are numbered closer to each other than any others between 1975-81. Gene Tenace is card #165 and Graig Nettles is card #169.

The Jim Wynn card has always made me sad, because it's a lost opportunity to see Wynn as a Dodger All-Star again. He played for the Dodgers in the All-Star Game in 1975, but he's airbrushed into Braves gear after the offseason trade.

Also, you can see two third basemen listed, but Rose played the outfield in the '75 All-Star Game. The Penguin didn't do outfield. 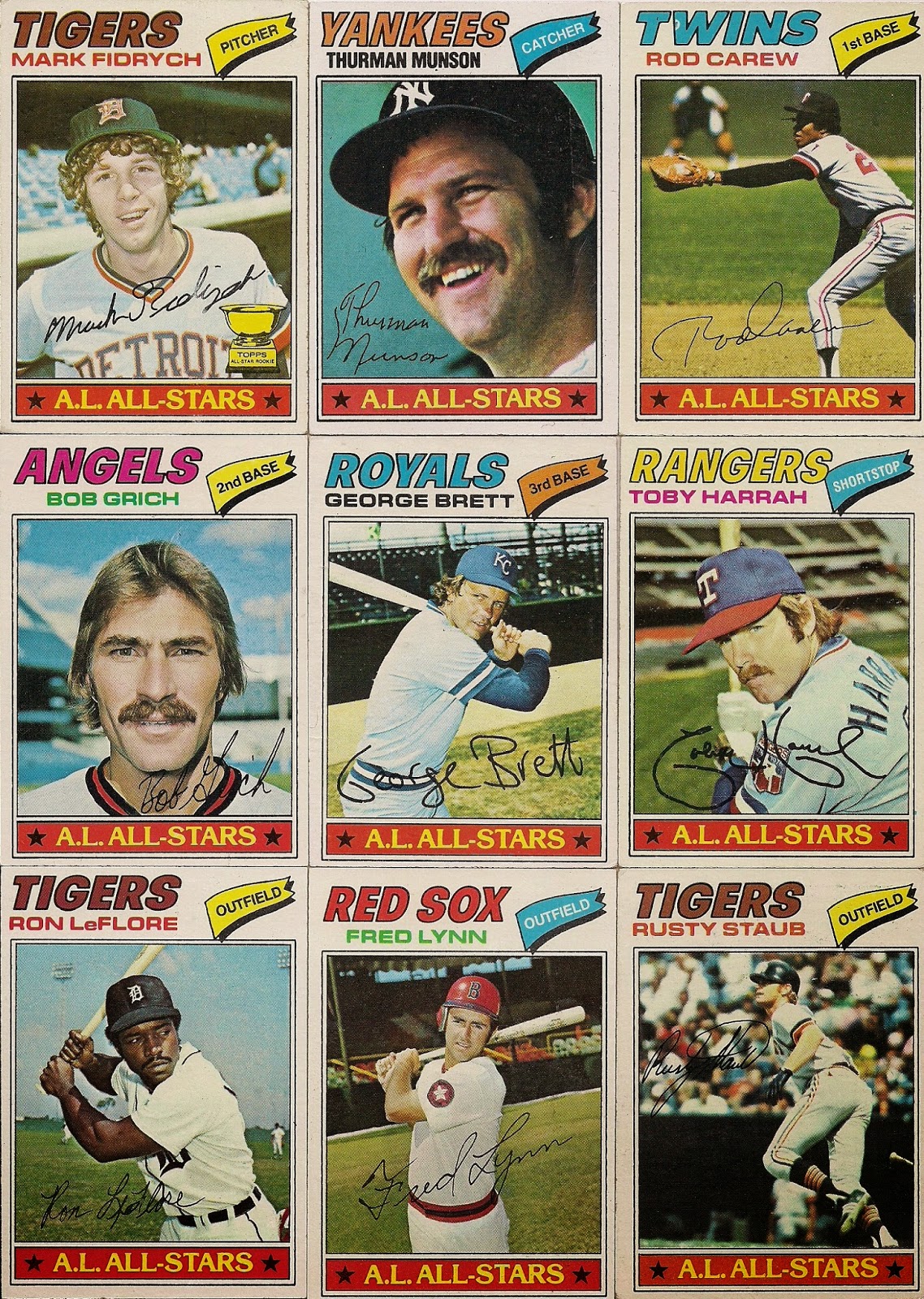 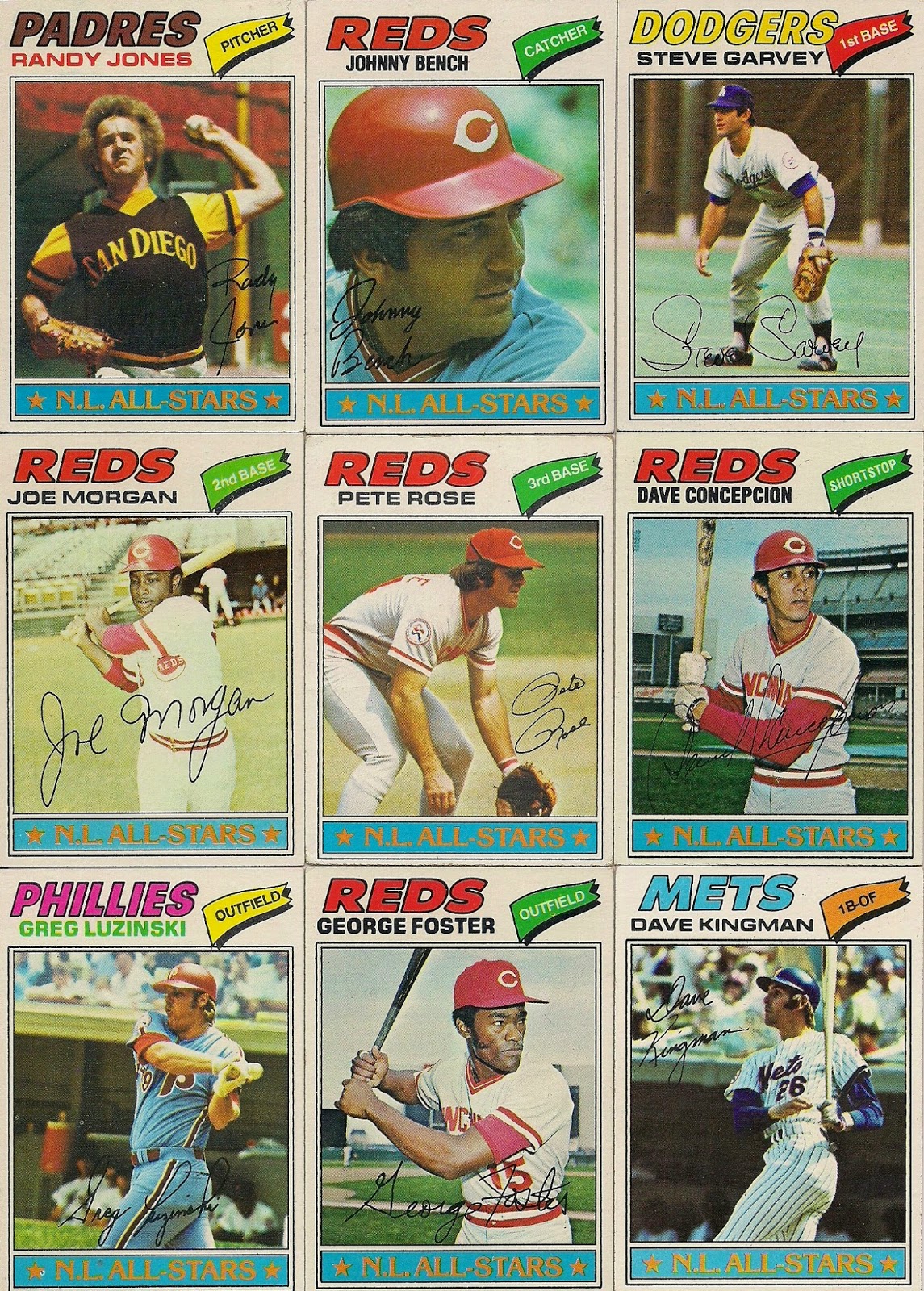 This marks the year when I really began to realize what the All-Star Game was all about. I would watch my first All-Star Game in 1977 and finding cards with red or blue bars at the bottom meant everything. I can't even begin to explain in words how special that Dave Kingman card was because it featured that blue bar.

The American League stars are noticeable for the new blood, particularly Tiger blood. 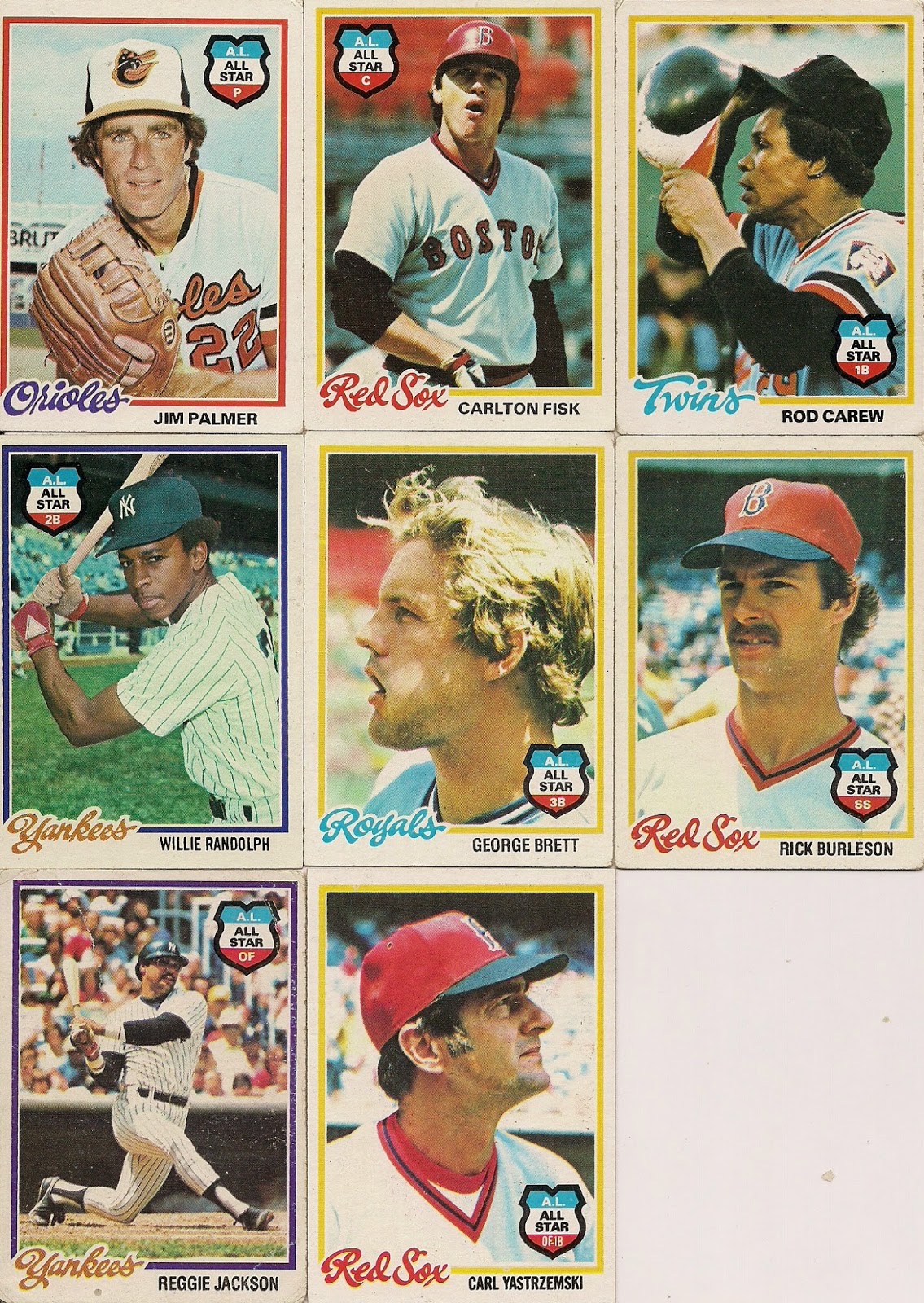 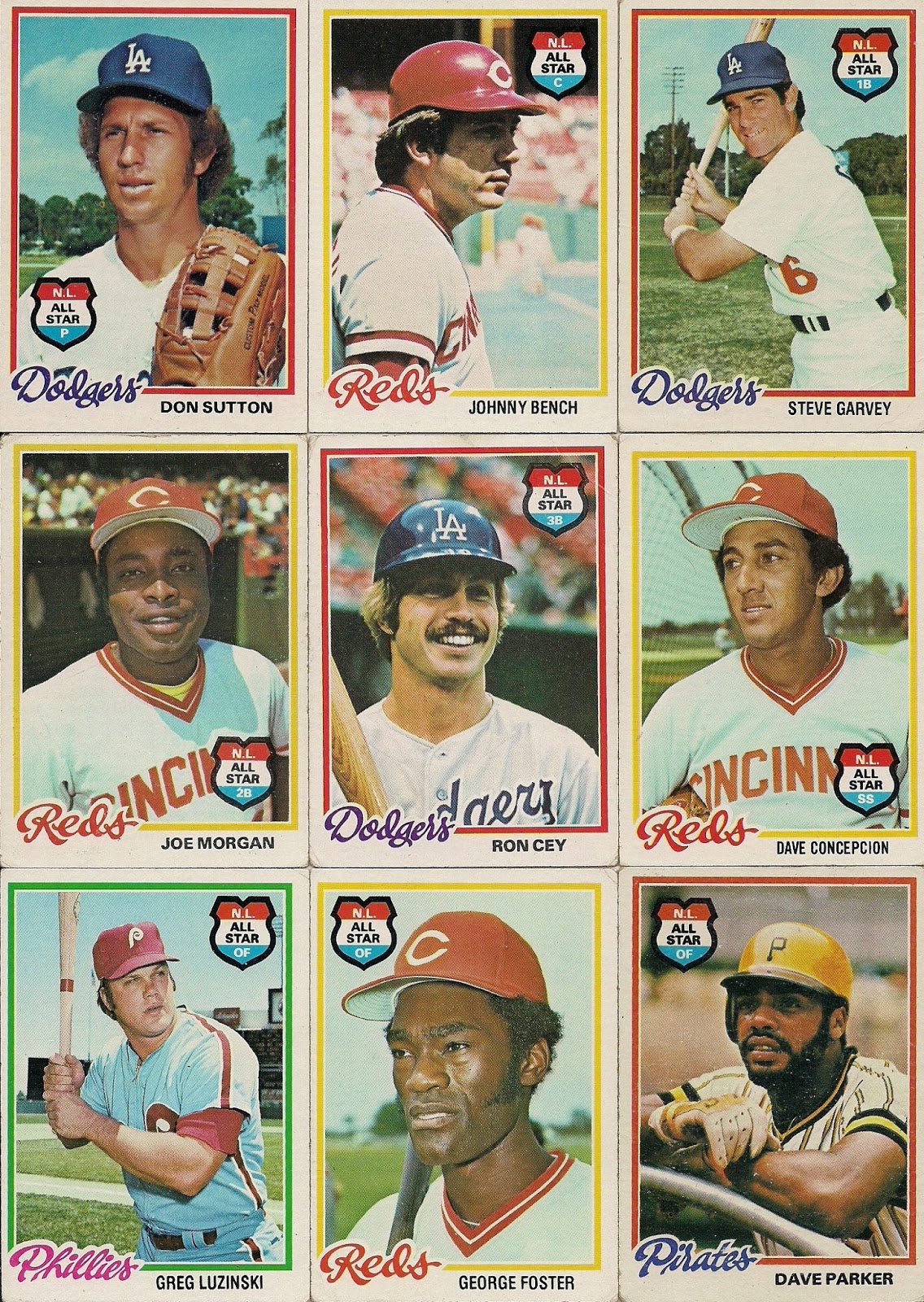 The All-Star badge is a stroke of genius, just tremendous. It really gave the All-Star cards extra value that year. This was the year when I considered All-Stars as true heavyweights and heroes. And looking at the National League is there any wonder?

Topps goofed with the American League again, failing to give outfield starter Richie Zisk an All-Star banner. Perhaps they were so busy airbrushing him from a White Sox player to a Ranger that they forgot. 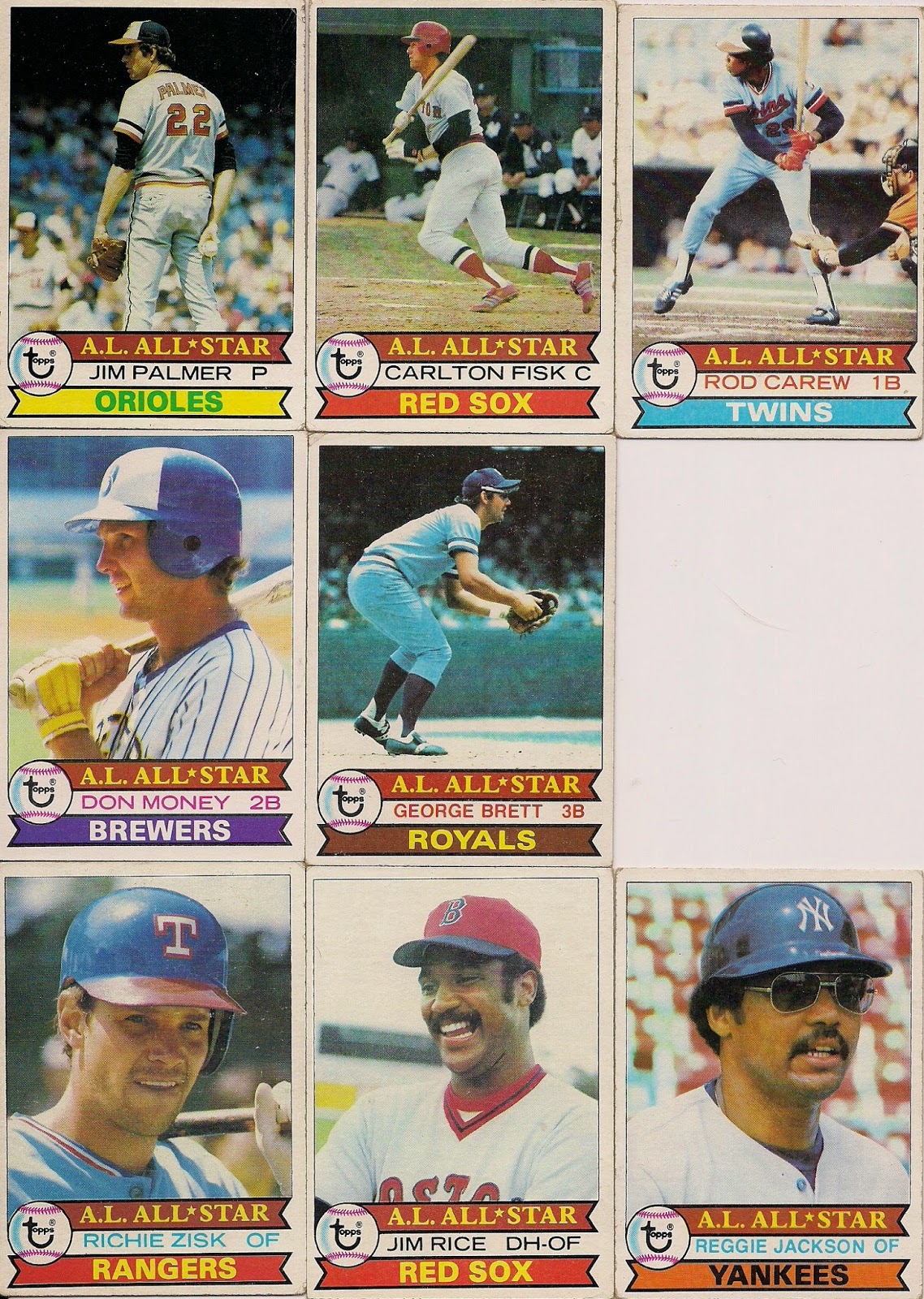 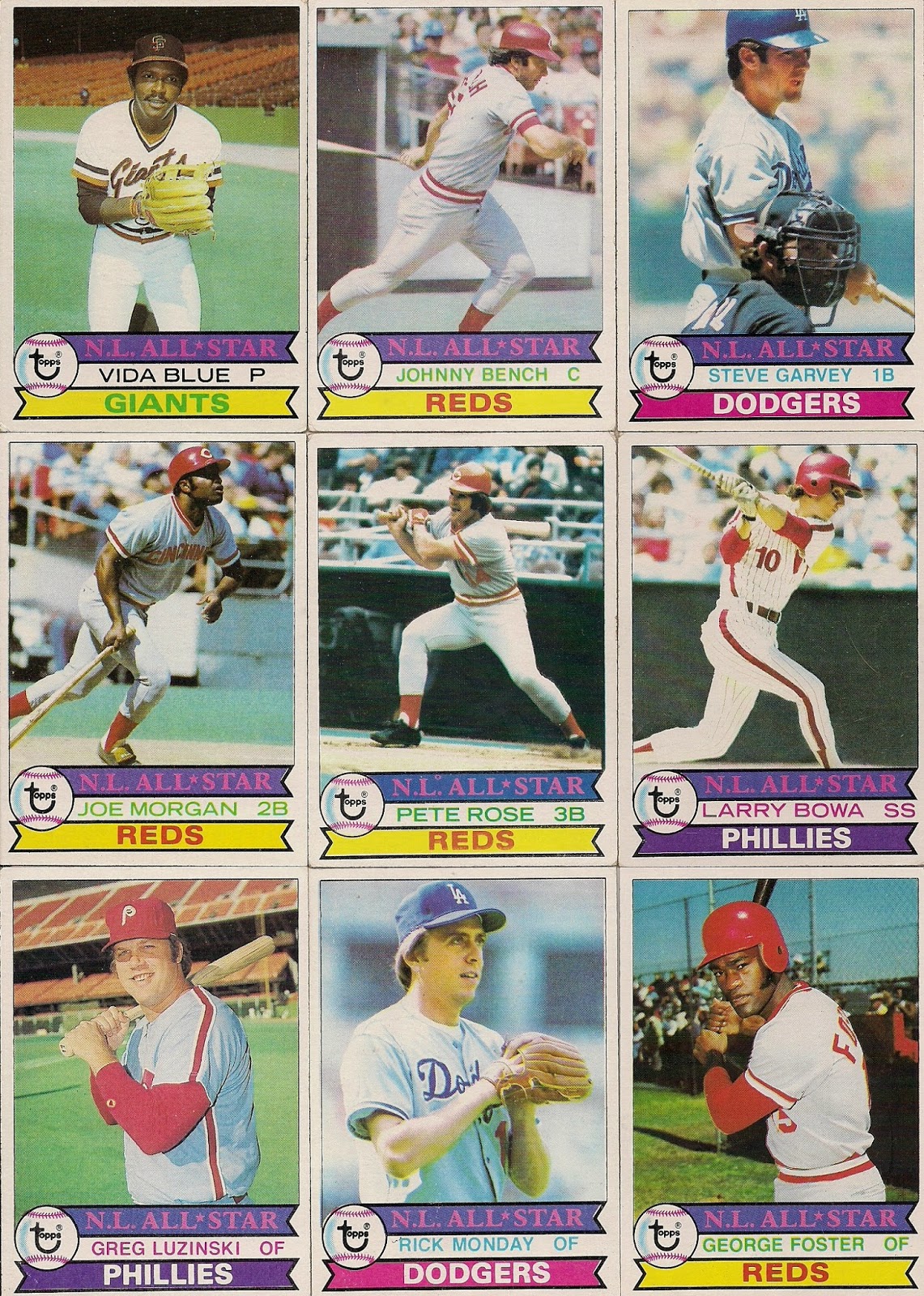 Oh dear, Topps really had it out for the American League back then. Wasn't it bad enough that they lost every game?

This time, Topps failed to acknowledge Royals shortstop Freddie Patek with an All-Star banner. At least it remembered Zisk.

This set also is noted for featuring Vida Blue as a National League starter three years after he was featured as an American League starter. 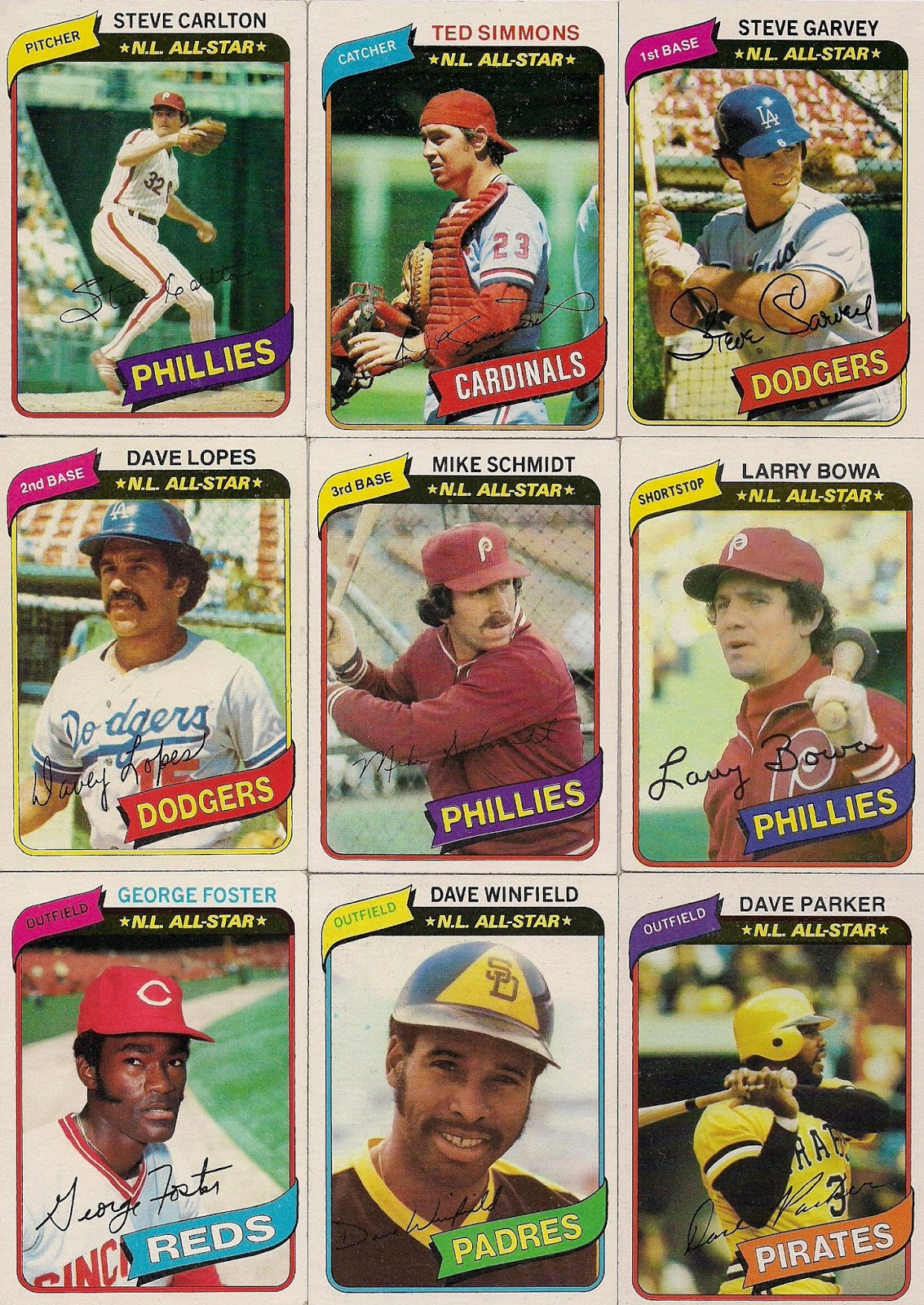 The American League lineup isn't exactly how it happened in 1979. Carl Yastrzemski played first base because Rod Carew, elected to play first, was injured and couldn't play. Don Baylor took over as a starter in the outfield, but did not receive an All-Star banner in the 1980 set.

These cards commemorate the All-Star Game I will remember long after I have forgotten all of the others. That game in the Kingdome and Dave Parker's throw home to gun down Brian Downing will live on forever. 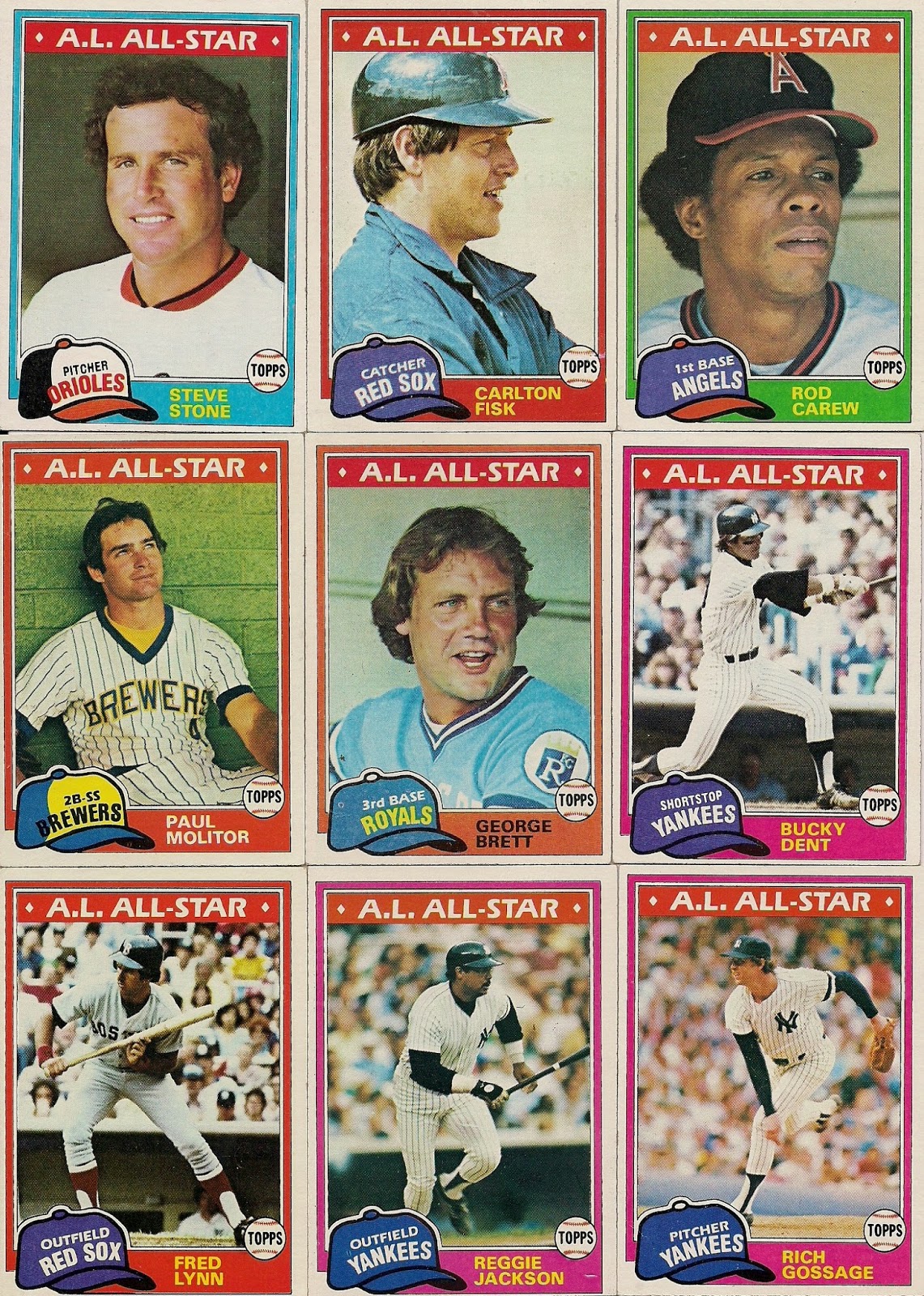 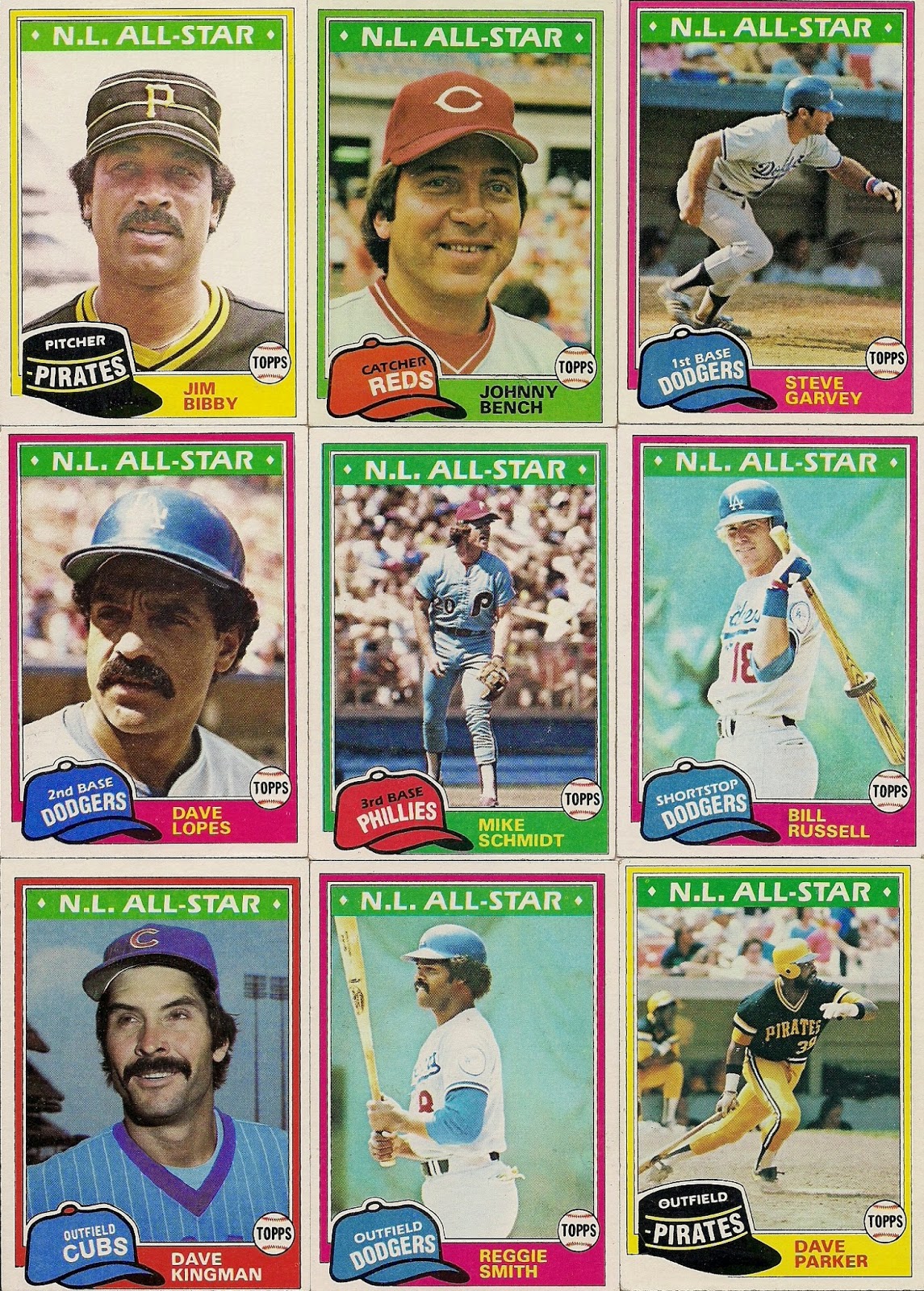 All right, this is where Topps started to get funny with its All-Stars. In fact, I'm willing to bet you can trace all of the shenanigans that Topps is known for today to these very All-Star cards.

First, let's focus on the American League. You'll note that the AL features two pitchers and only two outfielders. That's because Topps shafted an AL outfielder for the third time -- this time the Brewers' Ben Oglivie -- and failed to supply him with a banner. I guess that's what happens when you're acknowledging RELIEF PITCHERS with a group of starters.

In the National League group, the biggest issue is Jim Bibby. Bibby did not start the 1980 All-Star Game. He came on in relief in the seventh inning. The starter was J.R. Richard -- who didn't receive an All-Star banner in the set. I find this almost as egregious an error as the lack of a Reggie star in 1975. Richard suffered a STROKE a mere few weeks after his All-Star appearance and Topps added insult to injury by failing to recognize his All-Star appearance.

Also, Schmidt did not appear in the 1980 All-Star Game because he was hurt. Ken Reitz took his place, but let's not quibble because that Schmidt card is one of the few awesome ones of his career.

Also, here are the extra All-Star cards from the 1981 set that I couldn't fit in a nice nine-card set:

Gura and Carlton were selected to their respective teams but never played. Sutter pitched the ninth in the 1980 game and got the save.

I'm not sure how accurate the 1980s All-Star cards are in representing the starters from the previous year. As the years have gone on, I haven't been quite as devout in my All-Star followings.

However, even though those old enough to know better know that the ASG isn't like it once was, it's still an event for me and I'll still watch it to the end (and cringe over whatever contrived displays they come up with this year).

It took me years to assemble all the cards of All-Stars from 35 years ago. I'm not turning my back on the game now.

petethan said…
I knew Topps screwed up with these a few times, but I never realized that it was pretty much a regular thing. I'd love to hear the explanations for the various omissions (as long as it's not as simple as, "Uh, we forgot."

I agree with you about the badges on the '78 cards. They're the ones I think of first when I think of '70s Topps All-Star goodness. Thanks for assembling the stars for display.

BaseSetCalling said…
pound for pound that had more iconic cards than you're likely to see anywhere. was just ripping some Archives during the game … Topps photogs seem to have forgotten all about the posed fielding shot. The 75 Bowa is a nice card … so pensive. And the 76 Garvey makes me think … Joe Mauer.
July 16, 2014 at 12:58 AM