July 21, 2014
(I suppose you've heard that today is National Junk Food Day. Why this day isn't scheduled for a Sunday in October is beyond me. But mostly I want to know, where is National Junk Wax Day? We could schedule it for every August 27 -- August always needs a holiday -- and celebrate by dumping our surplus 1991 Donruss in the river. Think about it. In the meantime, here is Cardboard Appreciation. This is the 209th in a series): 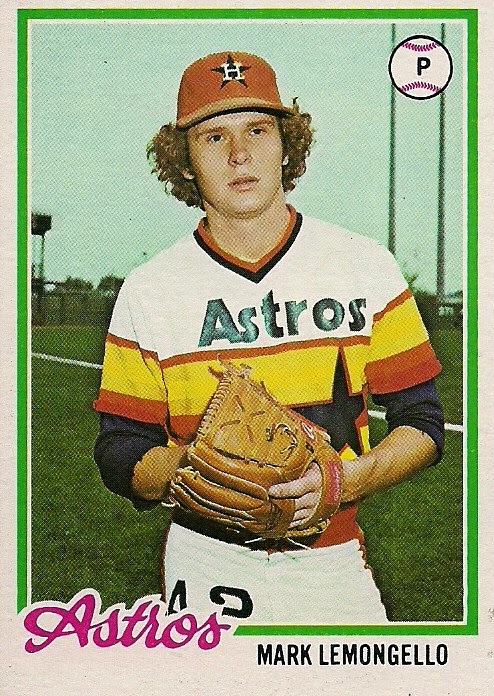 Let's start with the name, since that's what draws everyone's attention first.

To be honest, I didn't make the connection when I first saw this card in 1978. Mark Lemongello? Lemon Jello? It sailed directly over my head. This was probably because I was in seventh grade at the time and completely smitten with a devastatingly pretty girl named Lisa Maringelli. "Lemongello" and "Maringelli" are much too similar when you're 12 years old and in love.

So, to me, at that time, this Lemongello was a cool dude, because his name glides off the tongue -- like Maringelli -- not because it glides down the throat like lemon jello.

Next, let's address everything else you've read about Lemongello, because he's been written about more than a few times.

You've probably heard that he had a temper. He wrecked things. He'd take out a clubhouse after a poor start. He punched through hotel ceiling tiles with his fists. He once smashed a Coke machine, destroyed a couple hairdryers, and when he was a teenager, obliterated his stereo system. There is video of him (uploaded by none other than Wrigley Wax) flipping out -- and flipping off -- on the field against the Cubs.

A former teammate and good friend of his at the time, Frank MacCormack, remembers the aftermath of a minor league game in 1975 in which Lemongello held a 9-0 lead before exiting in the sixth inning with a blister. The other team tied the game 11-11 and then won in the bottom of the ninth when the right fielder lost a ball in the sun and the winning run scored. Said MacCormack:

"Later, at a restaurant, there were a bunch of us, we ordered four T-bone steaks and four baked potatoes. Finally, after an hour and 15 minutes, the waitress put the food before us. But there was one T-bone steak with french fries and she made the mistake of putting them in front of Mark who hadn't said a word since the game, just sat there seething. The french fries made him go nuts. He picked up the french fries and threw them at her, hitting her on the back of the head. Then he picked up the steak and fired it off the wall on the far side of the room. We told the manager we didn't know him."

This story, the others, and even more, including the time he bit a chunk out of his own shoulder, can be found in a Montreal Gazette story from 1979. It also recounts how Lemongello famously mocked Toronto and the Blue Jays when he was traded there by Houston, and how his family believes his increasing outbursts were due to losing a brother to bone cancer in 1976. Near the end of his major league career, he showed up Blue Jays manager Roy Hartsfield, letting the ball drop and walking away when the manager came to take him out of a game.

OK, now let's get to the kidnapping.

There was the time in 1982 when Lemongello and another pitcher, a former minor leaguer, abducted his two cousins and forced them to withdraw $50,000 from a bank and then dumped the two in the woods. (The two cousins, by the way, were Mike Lemongello, a former pro bowler, and Peter Lemongello, a former crooner who appeared on the Tonight Show several times -- but that's another story).

Mark Lemongello was sentenced to community work and seven years probation, which he served. The whole incident allegedly evolved from a dispute related to work that Lemongello was doing on Astros pitcher Joe Sambito's house.

But you know all that. It's all there on the internets. A number of times.

When I write about well-covered topics like this one, I try to find something that I haven't seen everywhere else. The most ideal nugget would be to determine what Lemongello is doing now. After all, today is his 59th birthday, and someone somewhere must be celebrating that, right?

Sadly, since serving his sentence, Lemongello seems to have dropped off the earth -- or at least off the internet.

But I did find something interesting that I didn't see anywhere else.

Lemongello began his professional career with the Detroit Tigers. He was signed by them in 1973. In 1975, he played for the Tigers' Double A club in Evansville, Indiana.

One of the pitchers in the same rotation as Lemongello that year was ... Mark Fidrych. 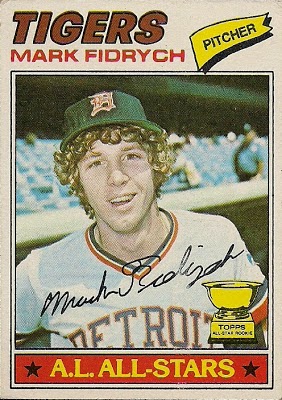 Lemongello and Fidrych were ON THE SAME TEAM!

Evansville must have been the most entertaining place to watch baseball in 1975. On one side you had Fidrych, charging out of the dugout, congratulating infielders in the middle of the game after nice plays, talking to himself, exhibiting hyper energy at all times; and on the other side you had Lemongello, a brooding perfectionist, whose outbursts were as volatile as Fidrych's were gleeful.

And here's another thing: Fidrych and Lemongello, along with MacCormack, Ed Glynn and Dennis DeBarr, were roommates.

So, I don't know where Lemongello is, and I hope the fact that he hasn't popped up in the public eye since 1983 means he's settled down and is enjoying a quiet birthday today.

But at least I know something that I didn't know before:

They need to make a movie about the 1975 Evansville Triplets. Right now.

Dave said…
The Triplets had some really good teams in the late 1970s. If I'm not mistaken, they were International League champions in 1978. A good chunk of the world champion 1984 Detroit Tigers came through Evansville and Jim Leyland managed many of those teams.
July 21, 2014 at 8:27 PM

JediJeff said…
I like noticing that Lemongello used to wear a now retired number on his jersey. I notice dumb crap like that.
July 21, 2014 at 8:28 PM

Commishbob said…
Just prior to when I began at my school in 1990 there was a set of twins whose first names were Lemongello and Orangegello. I thought it was an 'urban legend' when I first heard it but my wife who was a district employee confirmed it. They pronounced it differently... le-MON-galow and or-ANG-alow.
July 21, 2014 at 9:14 PM

Unknown said…
I just met Mark for the first time, he came to my home to do a site check for construction of a building. He is a very pleasant fellow now, and we talked baseball. Being a Red's fan, we talked about his experiences vs. the Reds. He told me he still has a welt on his leg from a line drive he took from a Pete Rose batted ball. He also told me that he pitched against (and defeated) Tom Seaver, a game in which he hit a triple and Johnny Bench subsequently threw the ball away (a rare event indeed), over the third baseman's head. I told Mark that most people would love to just be able to tell those stories, let alone pitch successfully in the major leagues. I did not even know about the other stuff until I hit the net to confirm his major league experience. And for closure to Night Owl: Mr. Lemongello seems to be doing just fine, is healthy and energetic, and seemed content with his current gig. I really enjoyed our talk about some of the golden days of baseball.......
December 11, 2015 at 5:26 PM

Unknown said…
I am trying to get in contact with Mark. I collect autographed baseballs from Toronto Blue Jay pitchers and would love to add his to my collection. Do you know what city he is living in now?
January 6, 2017 at 4:54 PM