'56 of the month: Jim Greengrass 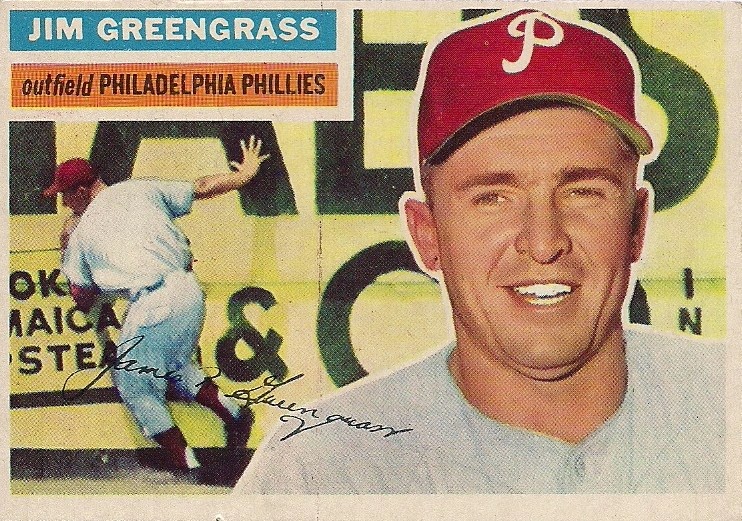 I wish I had time for this blog, but I'm too busy writing for a living right now.

I've really been slacking off on these '56 of the Month posts, too. The last one was in September. I'm down to doing them biannually, which I suppose is better than doing them biennially. (Figure it out, English majors).

So here is a short-and-semisweet chocolate morsel of a post about the Jim Greengrass card I picked up at a show several months ago.

I grabbed it solely because his name is "Greengrass" and he played the outfield. In other words, Greengrass played on green grass.

This is fantastic. As I'm sure I said when I acquired the card, why is this guy not mentioned every day? He should be a legend by now.

I also enjoy how this card shows some giant billboard advertisement. I don't have any time to look up what it might be, but I want it to be an advertisement for Jamaican Steaks because that's what it looks like it reads next to the action shot of Greengrass.

Also, I love the action shot. You never see an action shot like that on a baseball card. And I enjoy that he's playing with no number. I'm assuming it was airbrushed out as Greengrass was dealt from the Reds to the Phillies in the middle of the 1955 season. 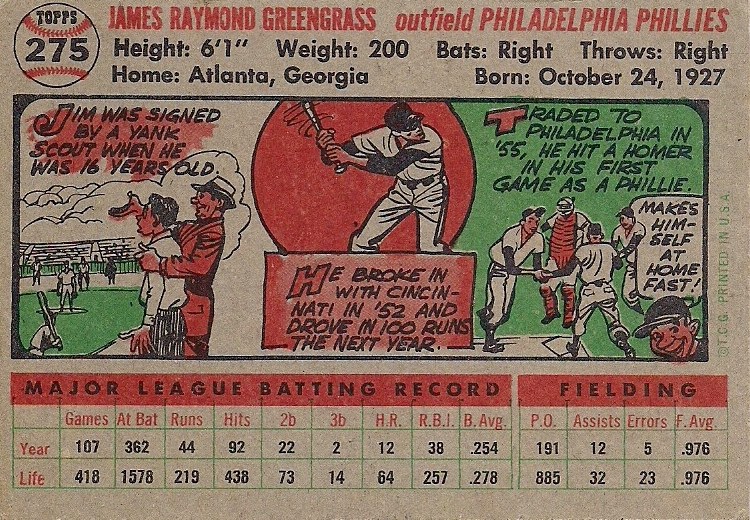 Greengrass made an immediate impact for the Reds in 1953, knocking in 100 runs and finishing sixth in the Rookie of the Year voting. He struck for 27 home runs in 1954. After that, things fell apart and he was out of the majors by 1957 due to phlebitis, which is an inflammation of the leg veins. He still deals with it to this day (he's 86 years old).

Greengrass also hit four doubles in the Reds' season-opener in 1954, which is a record. He shares it with a player named Pop Dillon. (Pop Greengrass would be an awesome name).

It doesn't say it on the card back, but Greengrass was born in Addison, N.Y., which is near Corning, N.Y., site of the famous glass center, which I probably went to about half a dozen times as a kid. (I think I went to most of those visits willingly, too, which just goes to show you how easily amused we were as children in the 1970s. "Dude blows glass??? What are we waiting for? Start the car!")

If you want to see several testimonials to Greengrass' pleasantness as a former ballplayer, check out the comments on Baseball By The Letters.

After seeing those, I like this card even more now.

carlsonjok said…
The Corning Science Center was a common class trip when I was growing up. The only thing I remember is the Van Der Graaf generator.
July 1, 2014 at 10:23 PM

In my case, my brother and I were dragged along to every Newport, R.I. mansion -where invariably we both would both be banished to the car for laughing too hard whenever the tour guide said "Gargoyle." Can you imagine? Sent back to a hot car without adult supervision....that wouldn't fly these days!
July 2, 2014 at 10:26 AM