Too much goodness to absorb at once 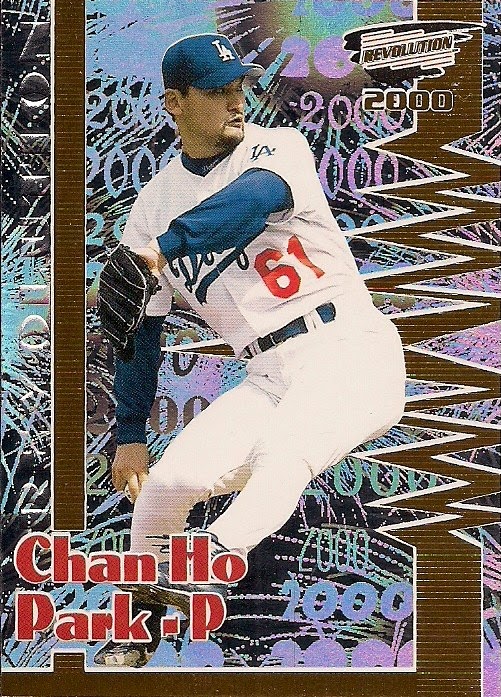 I am making a semi-serious effort to cut down on my Dodger doubles. I've already made arrangements on Twitter to send Dodgers to four or five people. That's not nearly enough to get to a respectable level of dupes. So if anyone wants a variety of Dodgers extras -- and, yes, I know the usual blogging candidates -- please let me know. I'd rather get rid of them this way than in more anonymous ways, which is what I will consider next.

One person who already has some Dodgers coming his way is Stewart, who jumped on my offer immediately. Not long ago, he sent a package full of variety straight from Dodger country. There was so much random that I couldn't process it all.

In fact, I thought I had absorbed it all finally, when I went back to it last night -- to scan, of course -- and was floored by something grand that I totally missed the first time.

I'm saving that piece of wonderful for last as is my custom. In the meantime, take a look at this: 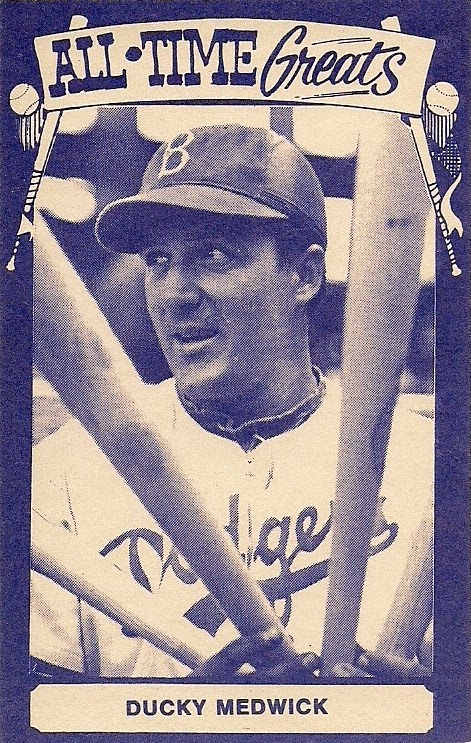 All-Time greats? You bet. Not only is someone named Ducky fanning himself with four bats, but I've wanted one of these cards since I was probably 13.

This is from the TCMA All-Time Greats series first issued in 1973 and then subsequently in following years during the '70s. I would see these cards advertised in catalogs like Larry Fritsch and others and drool over them. Cards of old-timey guys just weren't around in the late '70s. You saw them only from the good folks of TCMA.

Now that I have one, I can't get over how primitive it is. The back looks like it was written on a typewriter, which is standard for TCMA cards from that time. Also, there is a part on the back on the top edge that says "cut on the dotted line." You just don't get messages like that on today's cards. 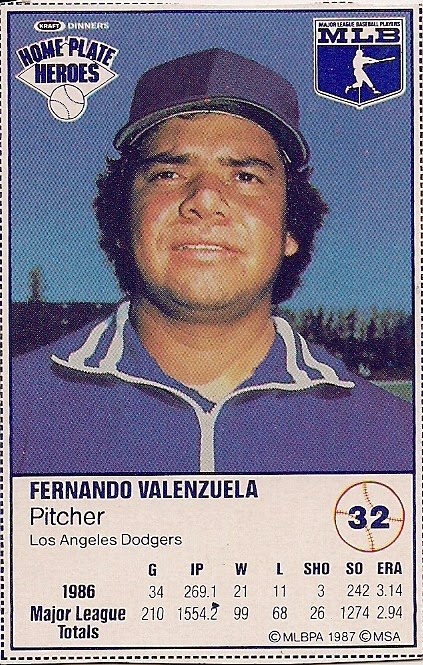 More primitive greatness created by scissors and cardboard. This apparently was cut off the side of a box of macaroni and cheese in 1987. I know this because I see "Kraft dinners" in the top left corner. And now I have "If I Had a Million Dollars" by the Barenaked Ladies in my head. 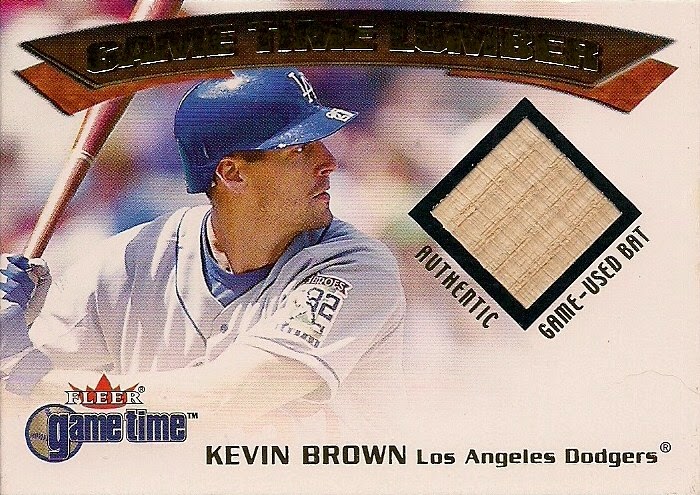 More quirkiness, which isn't easy to achieve with Kevin Brown. Normally, I give Kevin Brown cards a quick once-over stink eye. But this one features a piece of bat used by Brown after a year in which he hit .076. I can see why he was willing to give up the bat. 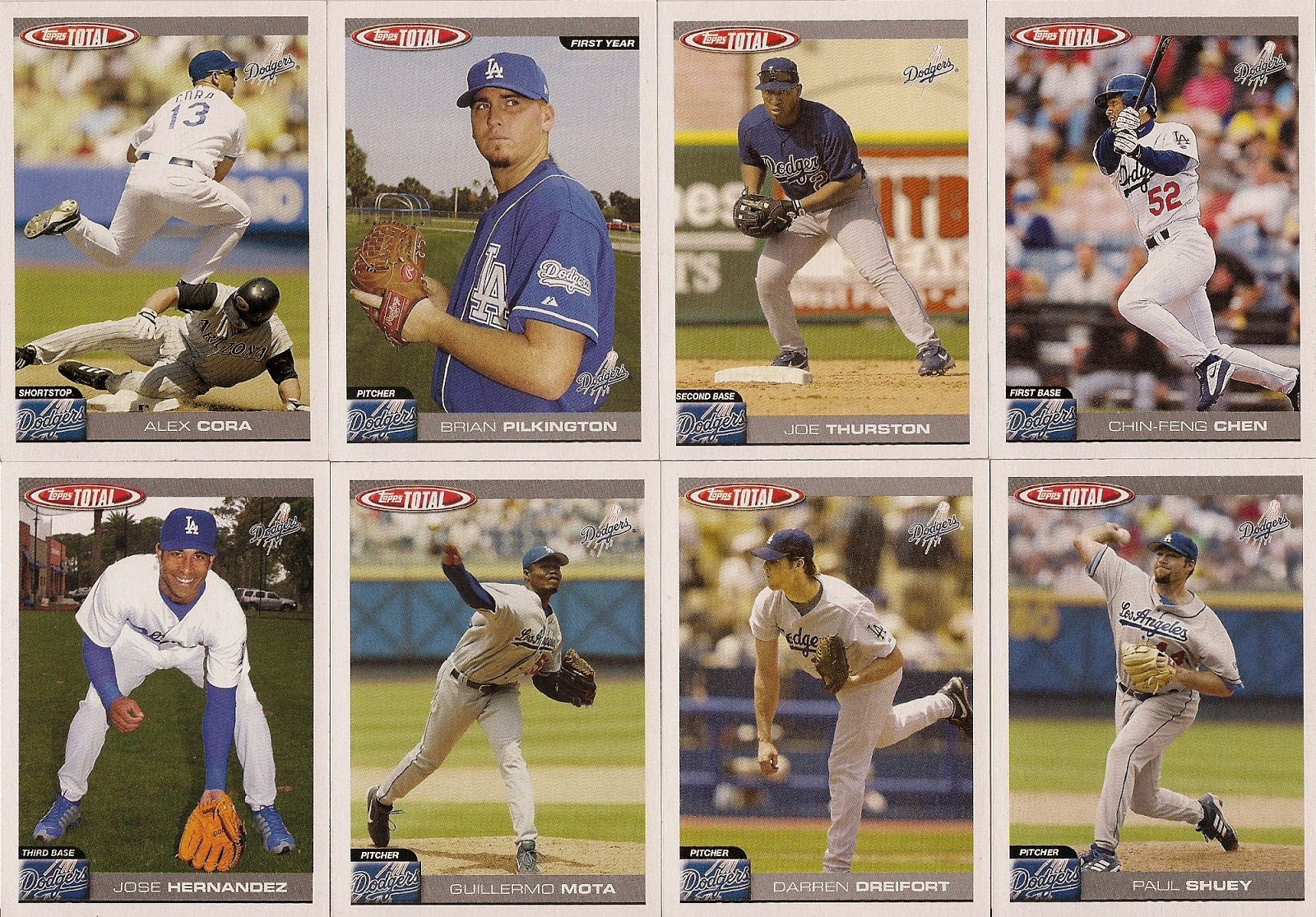 TOTAL! And I need all of that! LOOK AT IT! There is nothing like a massive stack to attack a massive set. One Total card is just not going to get it done. 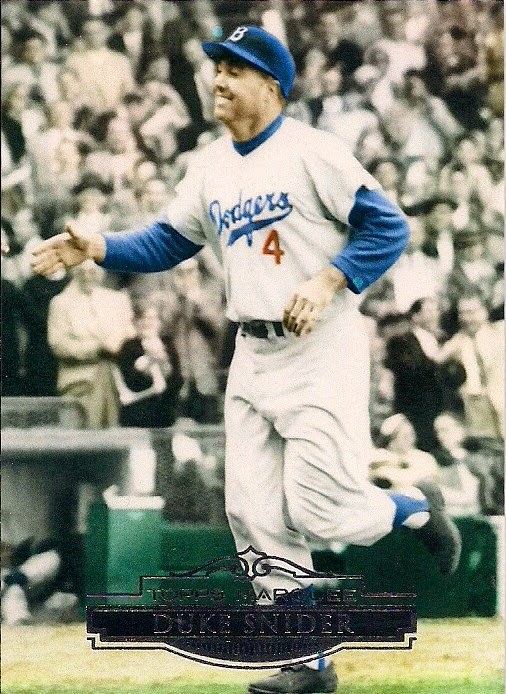 Some of these Marquee cards look colorized. I don't know if that's what's going on here, but it's very TBS, circa 1990. 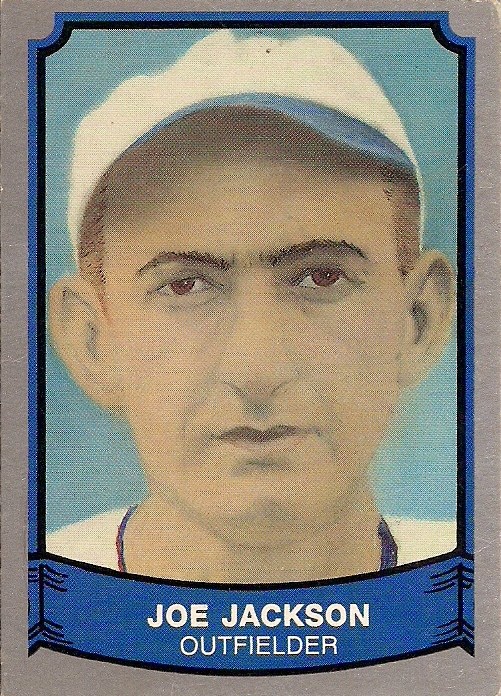 This is now the most unsettling card of Shoeless Joe that I have in my collection. Don't look at it for a long time. You'll see things. 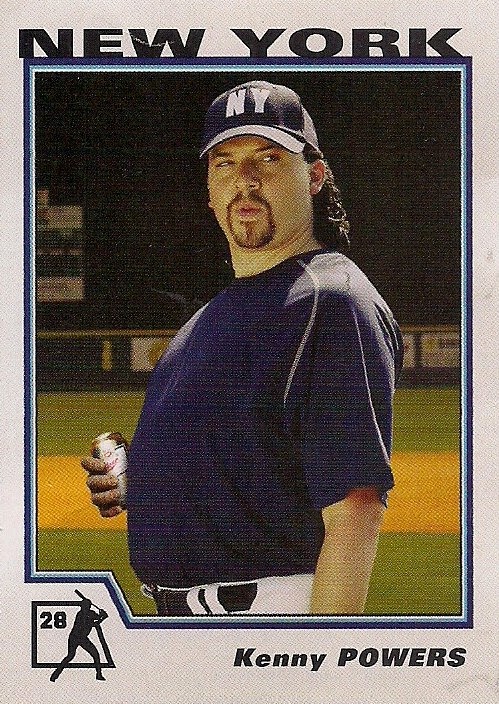 Laughed out loud when I saw this card. "I'M KENNY POWERS AND I'M VERY UPSET WITH HOW I'M ACTING RIGHT NOW!" That show needs to come back.

I have no idea where this card came from, but the back is fantastic, too. 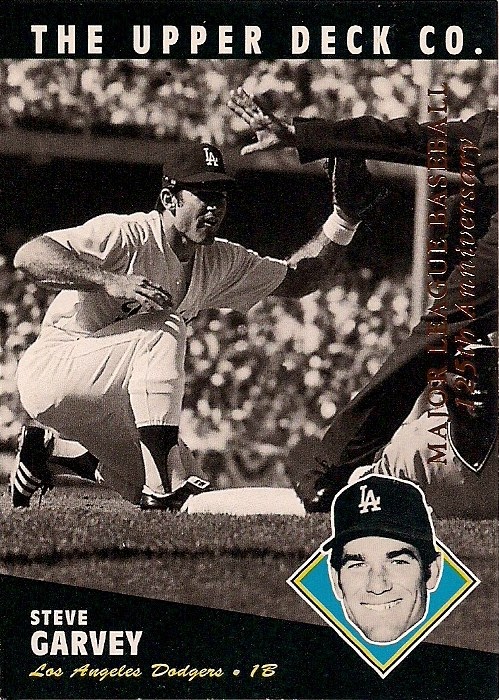 Gold foil parallel madness from the '90s. But at least it's Garv and his head floats. 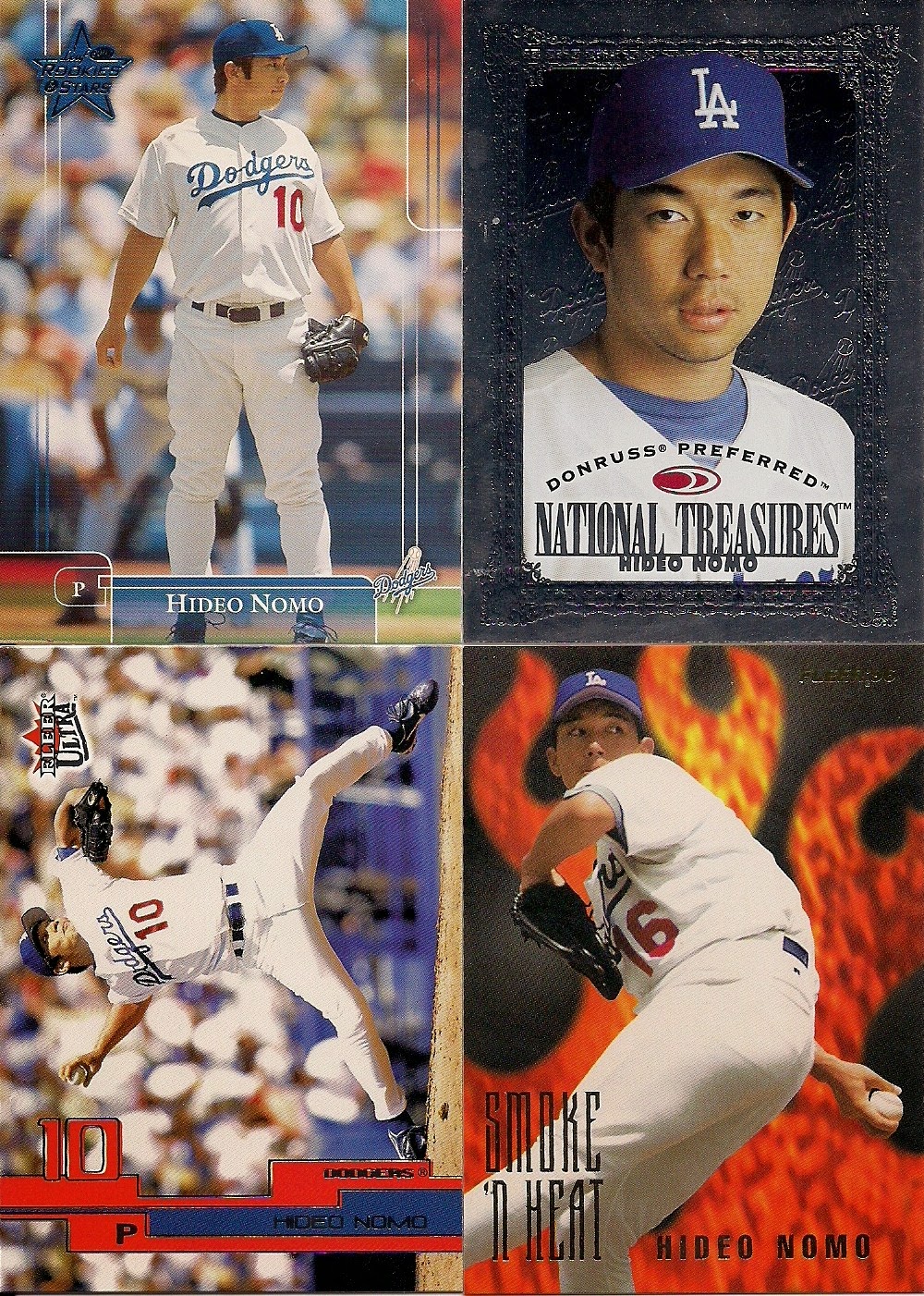 This is the Nomo portion of the post. Getting Nomo cards makes every day brighter. And Stewart was able to deliver six Nomo cards that I didn't have.

Here are a couple extra-key ones: 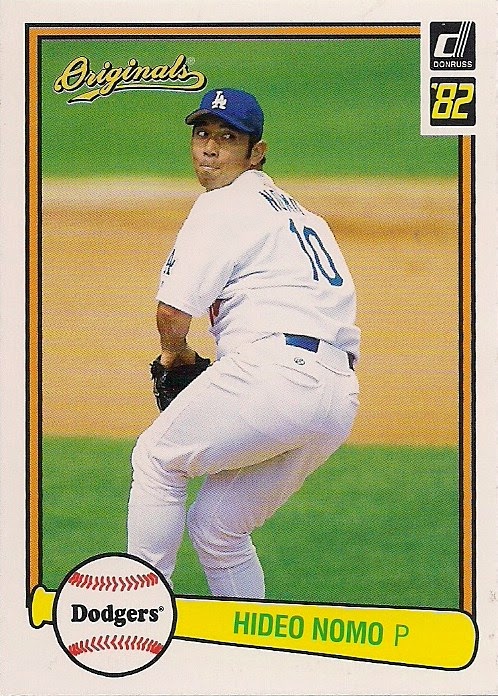 This is not a 2002 Donruss Originals card. Don't be so gullible. 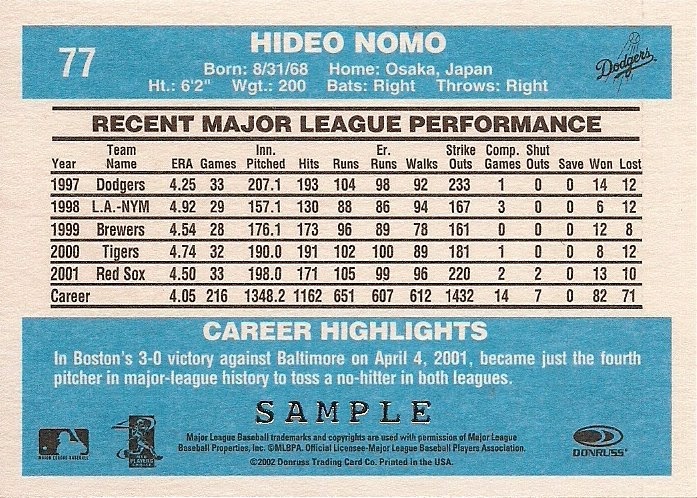 It is a SAMPLE 2002 Donruss Originals card.

I don't know what possessed Donruss to do this. Was it pissed off that no one was reading the card backs. "We'll show those sniveling collectors who only like the pictures." 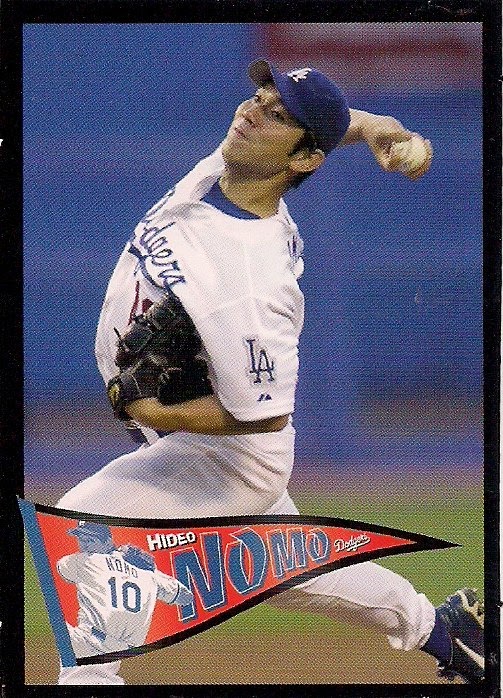 Stewart said he obtained this card from a guy working the parking lot at Dodger Stadium. I guess it's some sort of stadium issue, from around 2003. The back says Nomo is nicknamed "The Warrior", which I have never heard. 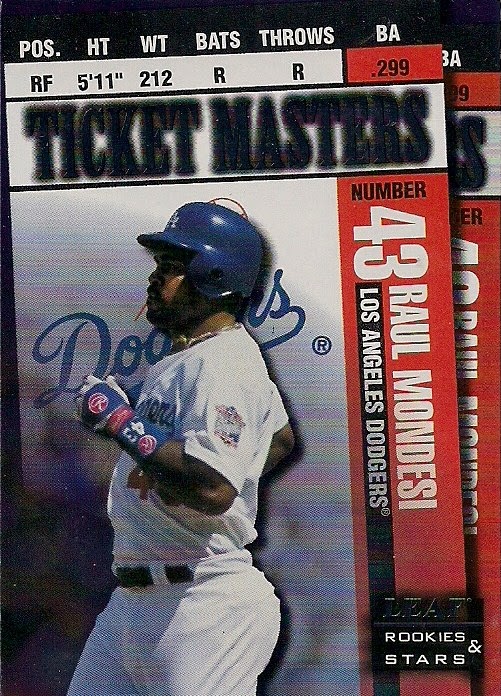 There were lots of Mondesi cards in this package. In terms of '90s Dodgers with the most cards, Mondesi probably comes in fourth behind Piazza, Nomo and Karros. 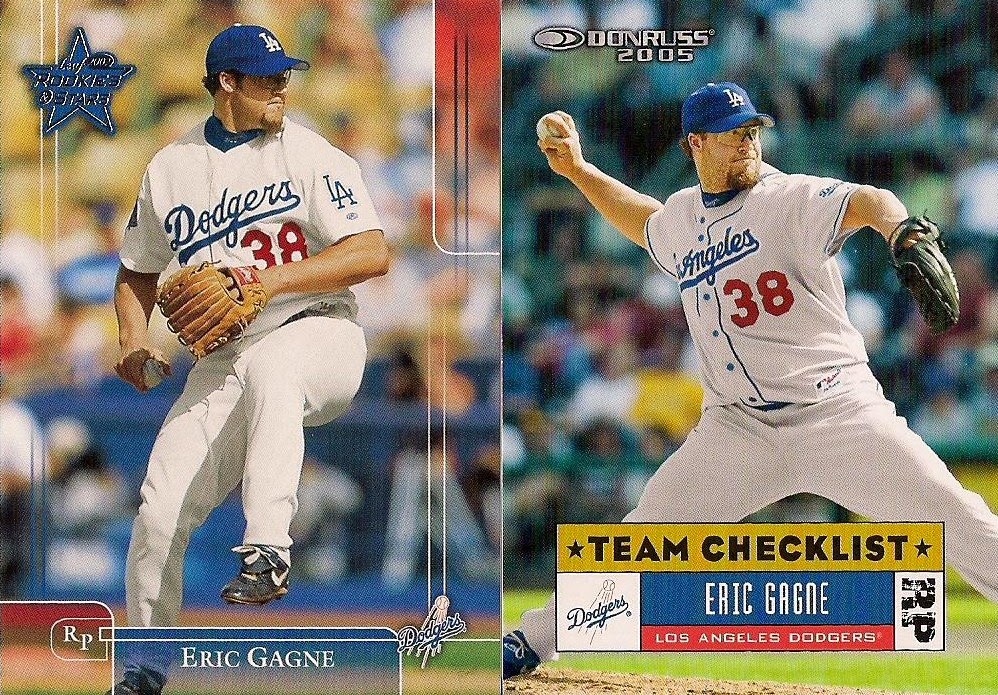 I will not apologize for wanting cards of Eric Gagne. Send them to me. Nothing from when he was a Brewer/Ranger/Red Sox though. 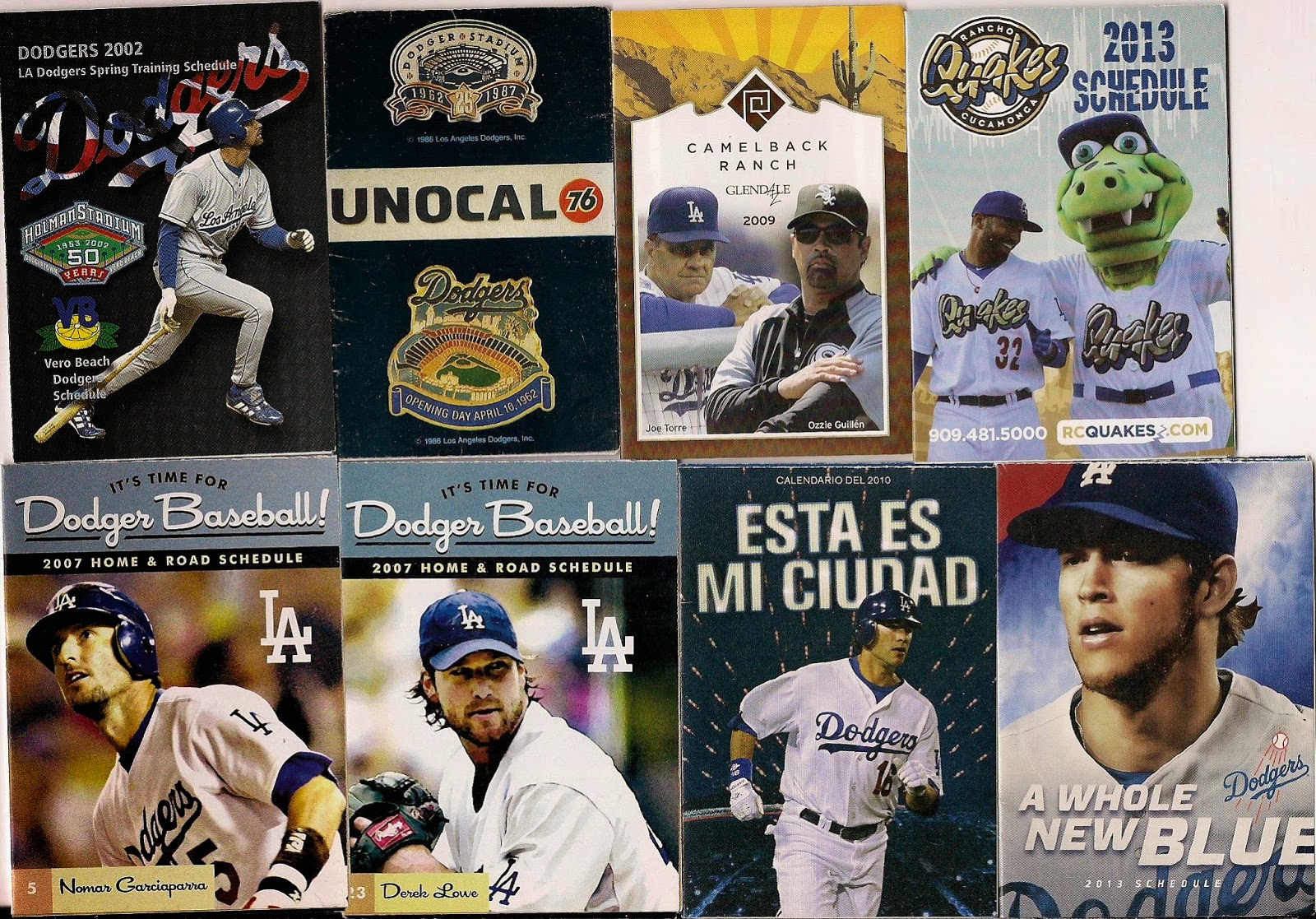 That is a whole lot of games already played right there.

I would love one day to have a schedule for every year of the L.A. Dodgers. I have a very meager amount already and this helps me quite a bit (although it's a little disturbing to find out that there are Spanish versions, spring training schedules and also apparently a schedule for every player in 2007).

Of course, that's in the eye of the beholder, which is probably the reason I also received this: 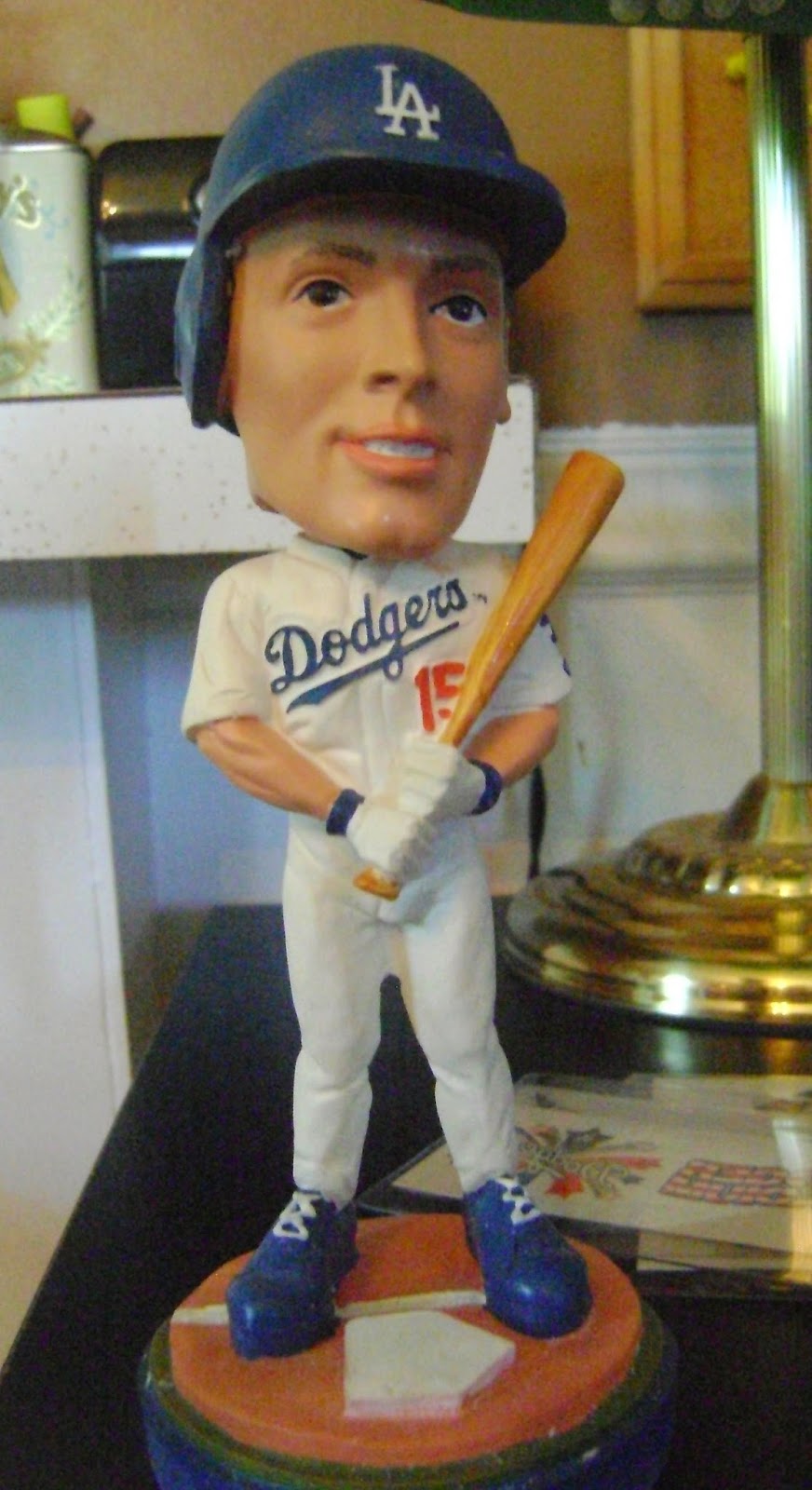 I carelessly cropped off the name at the bottom, but I think you can figure out (or maybe you can't, it is a bobblehead after all) that this is Shawn Green.

I've written before that me and bobbleheads don't see eye to eye. They're kind of neat, I guess. I just look at them like a dog trying to figure out what his owner is saying. Not really seeing the point.

But it's pretty cool that someone thought enough to send me one. In fact, as I said above, it was such a varied package that I completely missed some things the first time through. They sat on my desk for a couple of weeks without my knowledge. 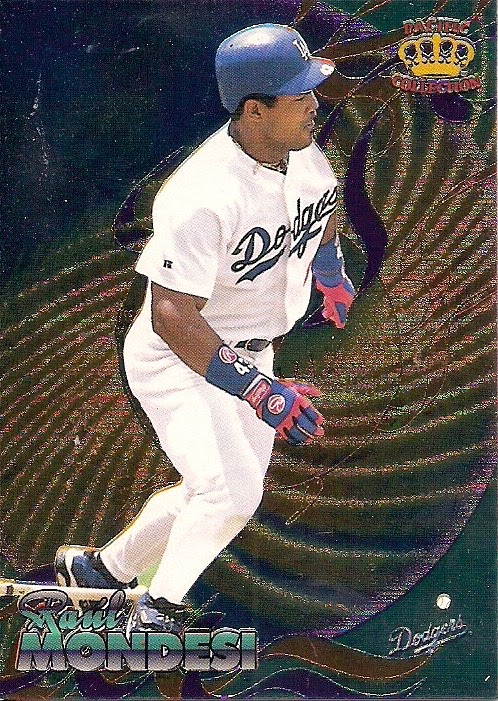 There was this Mondesi card that completely eluded me, despite the shiny. 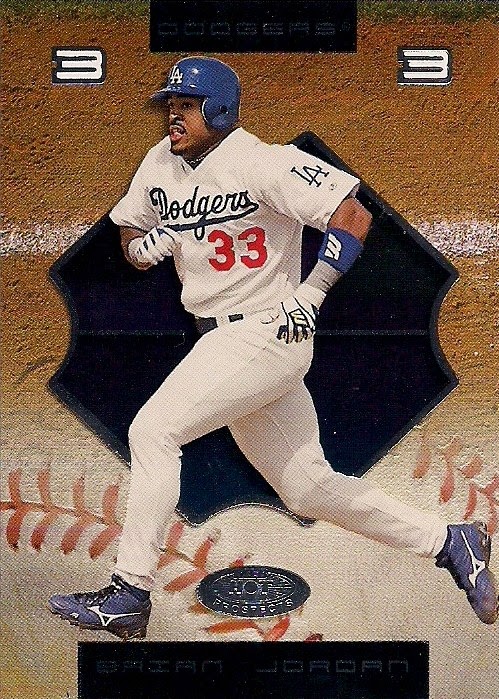 And there was this Brian Jordan card that I probably would have thrown in the dupes box if it didn't catch my eye a second time.

And then, at the bottom of all those cards (I'm only showing a fraction of them here), there was a note from Stewart: 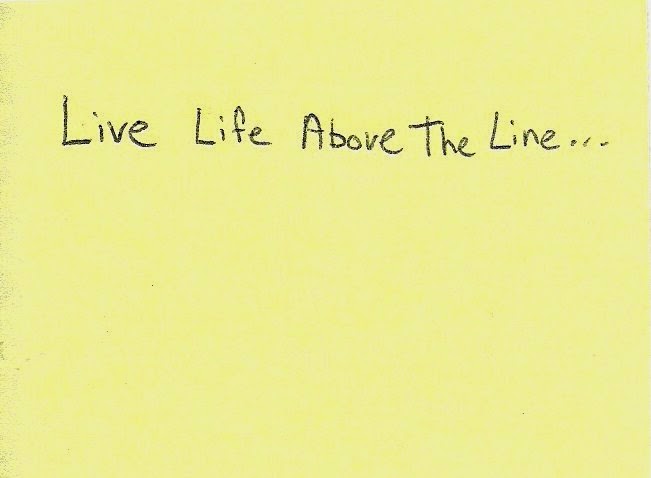 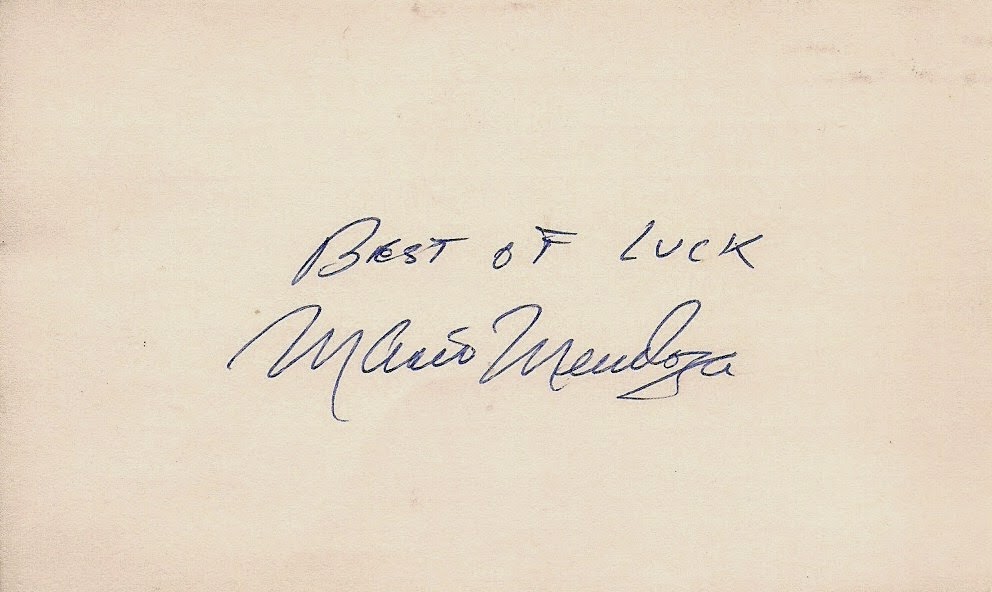 As in the Mendoza line?

As in THIS Mario Mendoza? 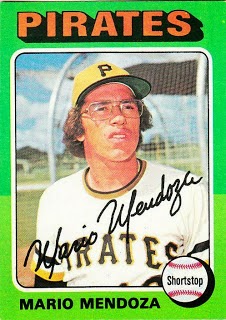 I really shouldn't ask, but now I need to know the exact circumstances of how this autograph on an index card came to be. I HAVE MARIO MENDOZA'S SIGNATURE! I NEED TO KNOW!!!!!!!!!

"Best of luck"? Well, obviously, I have your autograph, I definitely AM lucky.

That is totally cool, and my '70s collection rules more and more by the day.

And that is your daily reminder to go back through your cards because -- really -- you never know what you're going to find.

(P.S.: Don't forget about the Dodger dupes. If you want some, let me know)

steelehere said…
Nice package. The Monday Topps Gallery card is a parallel that I remember being pretty tough to get.
July 24, 2014 at 10:21 PM

Stewart65 said…
I knew you would like the Mario auto - Here's the story on it: I was at a random, late 80's card show (probably stocking up on Will Clark and Wally Joyner Fleer rookies) and there he was..... I didn't have any of his cards for him to sign but there was this dude with Ron Kittle glasses and a sweet fanny pack that gave me some 3x5s so I could get in on the Mario madness. He signed 3 of them with the same "Best of luck" inscription. When I asked him about what he was wishing me luck with he just said "You know..." I didn't then and I still don't. It's a Mario mystery. I don't remember what happened to the 3rd one, but at least I know this one has a good home.
July 25, 2014 at 1:27 PM

Fuji said…
My collection will not be complete without a Mendoza signature. Just another saved eBay search.
July 25, 2014 at 4:00 PM

EggRocket said…
I could go for some dodger dupes. I dont know what I'd send you though. Normally I'd think of sending you some dodger stuff but that's probably self defeating. And I could never top the Mendoza auto :-)

night owl said…
You're going to have to send me an email -- with the way yahoo keeps changing its set-up I have a hell of a time searching for specific emails.
July 28, 2014 at 11:47 AM