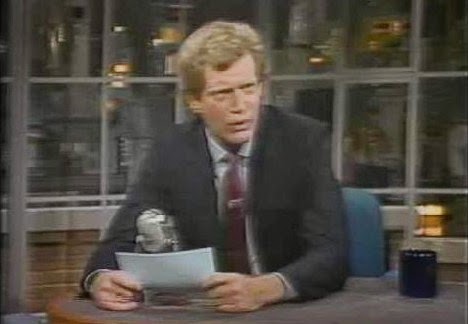 I am having a little too much fun placing my 1975 Topps minis in my new mini-card pages to devote a lot of thought to the blog tonight.

I am also attempting to give some attention to some semi-abandoned card packages so that I can actually send people cards at some point.

So I thought I'd answer a few readers' questions in the time that I have available. I call this segment "Night Owl's Viewer Mail". It is a tribute to the old Letterman show's "Viewer Mail' segment, back before NBC claimed all of that show's intellectual property and forced Letterman to call it the "CBS Mailbag" on his new show. It is not a tribute to a certain FOX cartoon show that basically signaled the point in my life when I realized I don't know what funny is anymore.

So here I am to answer some questions posed on some recent posts of mine or in actual letters (from actual viewers). 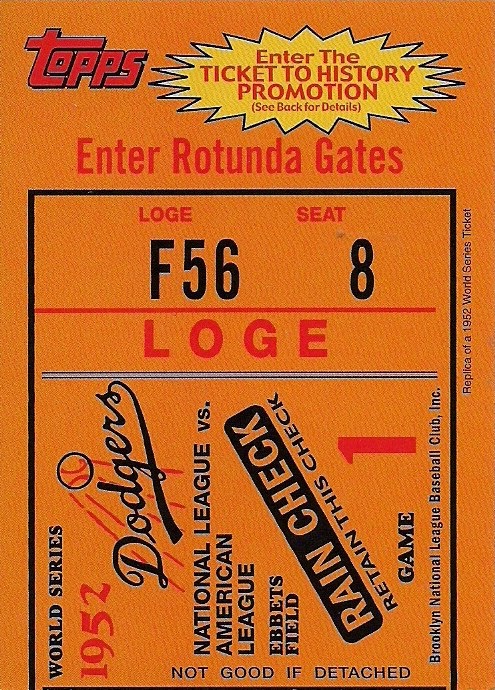 I sent you one of those promotional sweepstakes "tickets" that were part of the 2002 Topps set. Apparently you could win Topps Vault prizes, including a 1952 World Series program. I know you were required to enter by June 17, 2002, but do you consider these part of your Dodger collection?

Well, Nachos, and I do hope that you don't mind that I added a few extra words to the note that you sent me, the answer is "no." I do not consider these wastes of space Dodgers collectibles.

But let me qualify that. I do consider it worth keeping because I tossed it into the catch-all box of oddities that I have down in the basement, and that's where I discovered this: 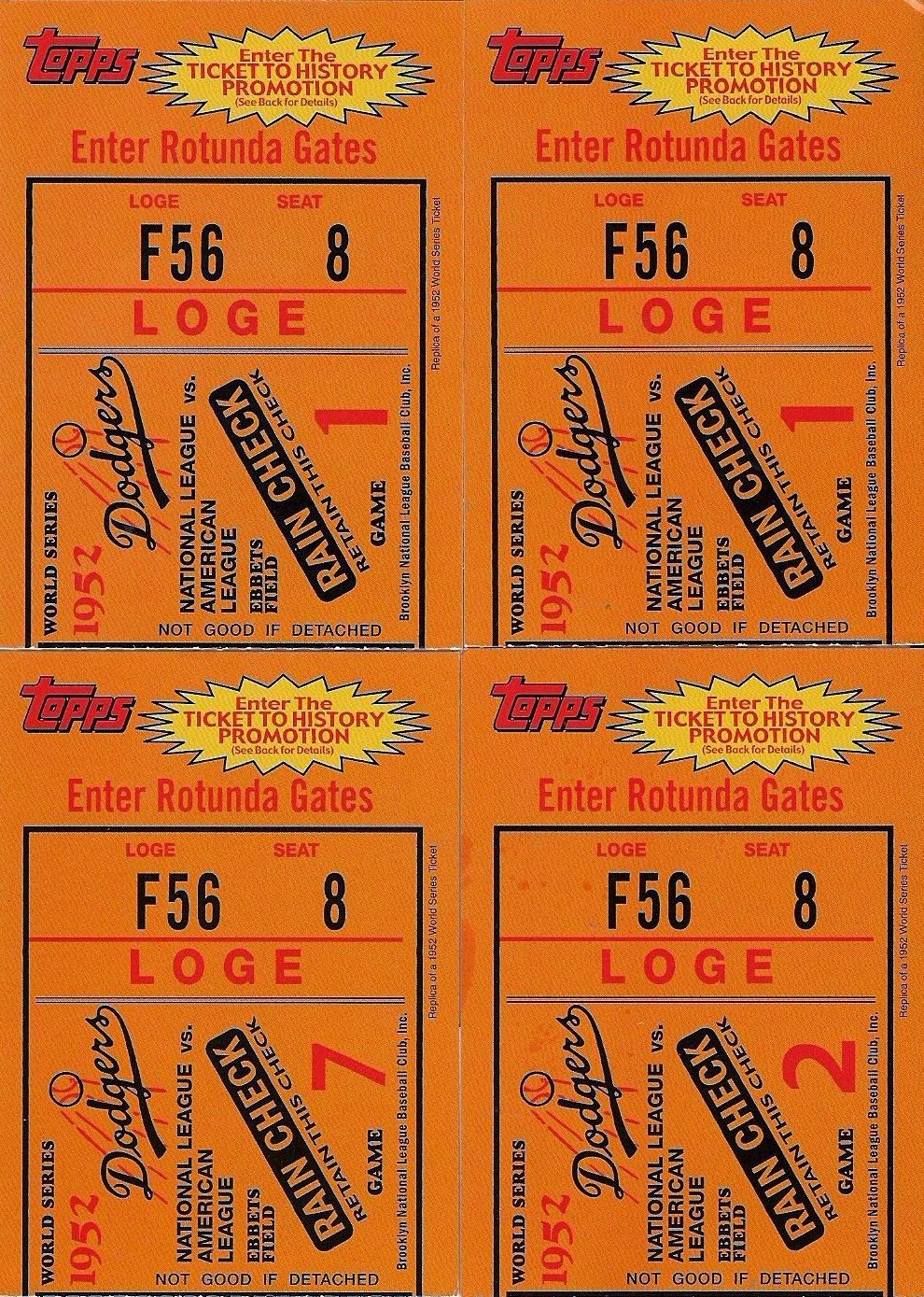 When I saw that, it caused me to remember that I've received this particular promo more often than five times. I've gotten so many that I've instinctively thrown a few of them in the garbage. How many reminders of a contest that you didn't win do you possibly need?

I know that the new UltraPro mini-card pages fit 1975 Topps minis. You talk about it so incessantly that I want to shove olives in both ears so deep that I damage my hearing for the rest of my life. But, tell me, oh wise one, what other cards fit in these new-fangled pages?

Well, Dave and Tony L. -- once again it took two people to write this letter -- I dropped everything to figure this out for you. And this is what I found: 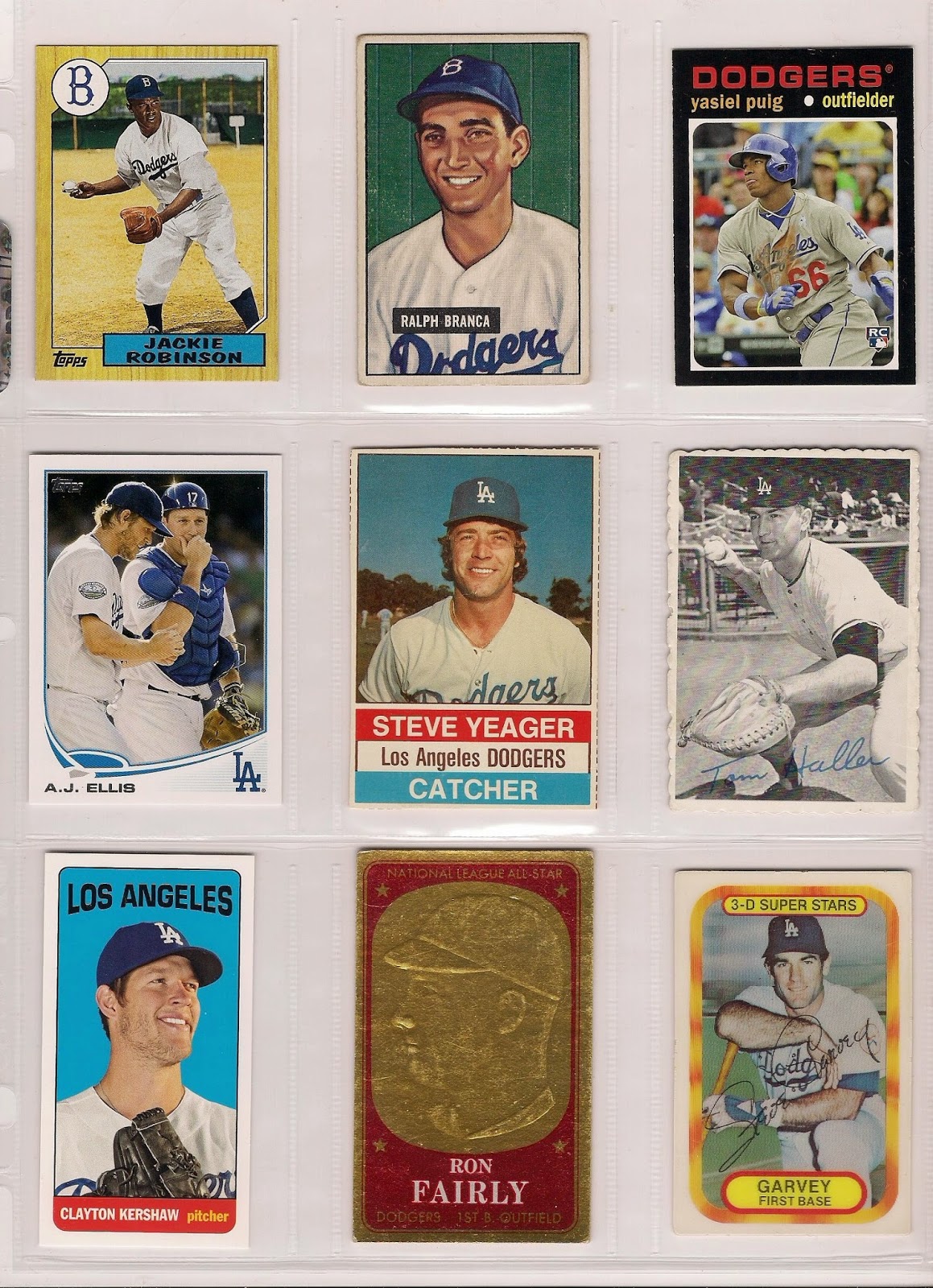 There are a host of smaller-sized cards that fit in the new mini-card pages. It depends on the individual collector and what he thinks looks best.

As you can see, cards as old as 1951 Bowman and as recent as last year's mini cards will fit in the pages. In my opinion, the ones that fit perfectly (besides '75 Topps minis) are in the middle row. Last year's 2013 Topps minis (middle left) are the same size as the '75 minis. The Hostess cards of the 1970s, when trimmed accurately, fit perfectly into these pages. And, perhaps fitting best of all, the 1969 Topps Deckle Edge cards slide in with not even the slightest bit of space left over.

There is enough space at the top of each pocket that taller cards like the 1965 Topps Embossed (bottom row, center) and last year's Topps Archives tall boys (bottom left) fit and the top edge does not hang out.

The 1970s Kellogg's cards will fit almost perfectly, too, although the years when Kellogg's went with a narrower card (1979, 1980, 1982 and 1983) leave too much air and could slide around in the pocket. The same goes for the 1971 Topps style minis from last year's Update set (top right), although it's still a vast improvement over sticking them in a regular nine-pocket page.

And I think that above response proves that I am officially obsessed.

30 dollars a day habit? Wow, have I gotten that bad?

Sincerely, Robert from $30 a week habit

OK, Robert, you caught me in a typo. Excellent work. There is a job vacancy at my place of work in which those skills are the exact ones that are required. You will be paid barely above minimum wage and will grow cynical and hate life within three weeks of taking the job.

But isn't it nice to think about what you could do with $30 a day dedicated to cards? The collection you could have! You would be the envy of every collector who blogs and even ones who don't. Housewives and construction workers alike would stare at you in amazement as you brought stacks and stacks of cards home every single day. Wouldn't that be wonderful?

In fact that's what I was going for with that sentence. Never mind the typo thing. I was giving everyone a little bit of an escape.

You posted a photograph recently of Reggie Jackson signing autographs for kids during spring training. This one: 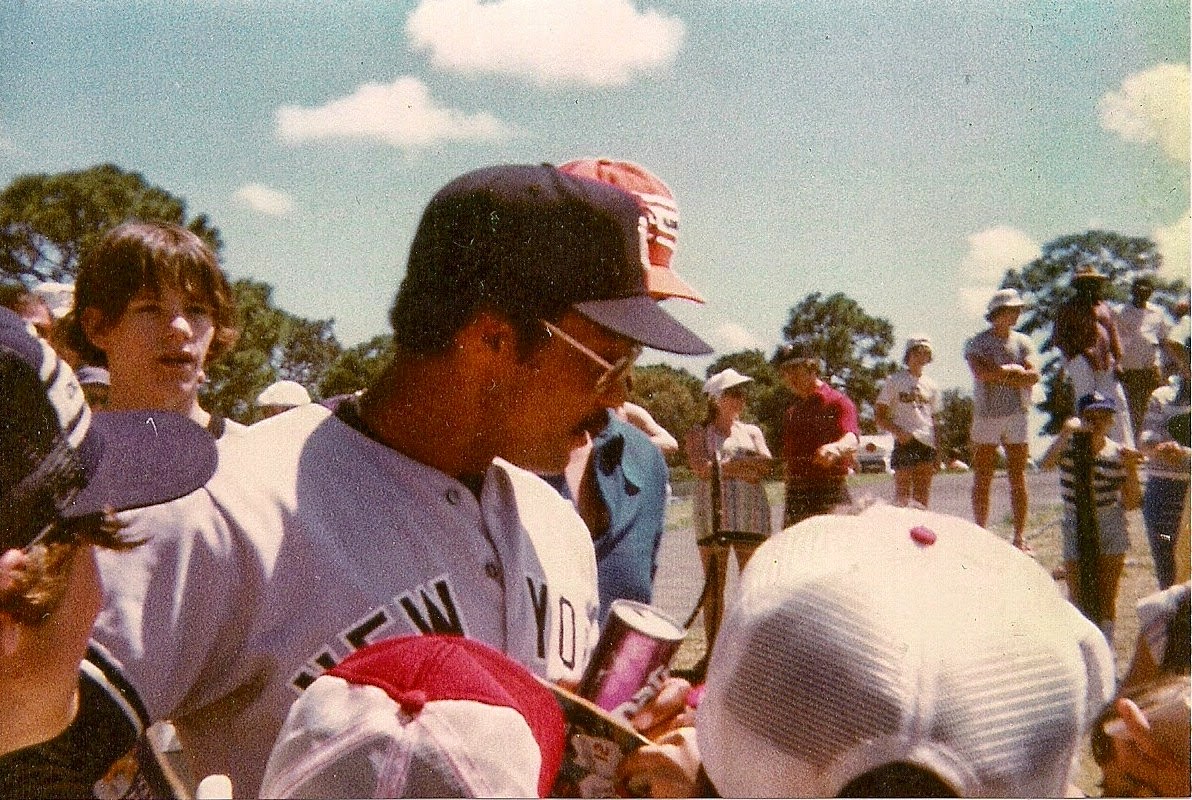 You had wondered what Jackson could possibly drinking. It doesn't look like Dr. Pepper or Grape Crush or Tab. Well, I have the answer for you. 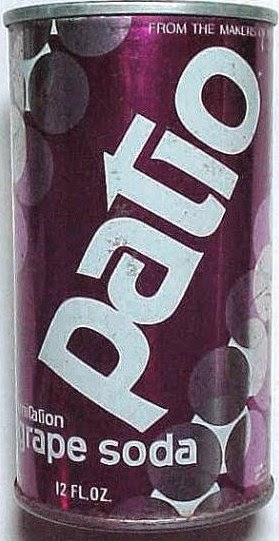 JT from The Writer's Journey

All right, JT, you win the Viewer Mail prize! When I saw the Patio can I knew instantly that was what Reggie was drinking. I also recognized the brand, not because I had drank it or even seen it as a kid. I remembered it from a Mad Men episode a few years a back. They centered a marketing campaign around Patio, which was an actual soda that in the 1960s was marketed as a diet soda to compete with Diet Rite Cola, which was the only diet soda on the market at the time. Patio diet cola eventually became Diet Pepsi. The other Patio flavors hung around through the '70s before being phased out.

Congrats on the mini pages. Once you complete the 75 mini set, are you going to go for the trifecta and attempt the 75 OPC set?

Um, steelehere, that wasn't a thought in my head until YOU HAD TO STICK IT THERE!

But honestly, I doubt I'll be doing that. I didn't have the faintest idea what an OPC card was in 1975, and my whole intent in collecting both the '75 base set and the mini set is collecting cards that I accumulated the first year I collected.

Thanks everyone for coming and as always, drive safely.

I could actually imagine that dream sequence you wrote about (without the construction workers).
It's also quite funny that you bring the "$30 a day" right in the middle of what might be the driest month for me since I started the blog.
July 9, 2014 at 8:29 PM

Commishbob said…
Here's some viewer mail for ya.... your 1971 blog was referenced in the comments of today's Uniwatch blog entry. Kind of a neat surprise when I came across it. The comment and link are about 4/5 of the way down the page and comes from someone named 'scottrj' if you want to check it out.
July 9, 2014 at 11:30 PM

Stack22 said…
A can (empty) of grape patio soda is currently up on ebay for the bargain price of $7.89 (plus $5 s/h). That'd be a nice item to get Reggie to sign, though in my experience, Reggie can be a bit salty about these sorts of things.