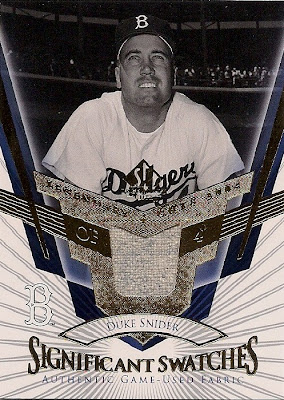 Between work, the Olympics, the baseball trade deadline and the impending thunderstorms, the last thing I should be doing right now is writing a post.

But creature of habit that I am, I've got to make things difficult.

I'll make it quick because I just saw lightning.

Out of all of the players that I collect, there is only one who has crossed so many spectrums of the hobby for me. I have discovered great cards of him among cheapie '80s issues. I've found great vintage cards of him. I've found fantastic shiny autographed cards, and the man himself has even supplied me with his own autograph on a few cards.

Of course, I'm referring to the Duke of Flatbush, Mr. Snider.

You saw the 1956 card of him yesterday. Well, here is the card I received in the mail today. Isn't it swell?

There is nothing more impressive than relic cards containing bits of uniform from 50 years ago.

This arrived from Matt of Cardboard Conundrum ... and yes, I had to look up how to spell "conundrum."

It's my second relic card of The Duke. As Upper Deck says, it's "significant." On the back, it says I'm to be congratulated because it's a "game-used pants card."

Hoo-boy. You know how I feel about those.

But I can't let my hang-ups ruin another fantastic card from The Duke.