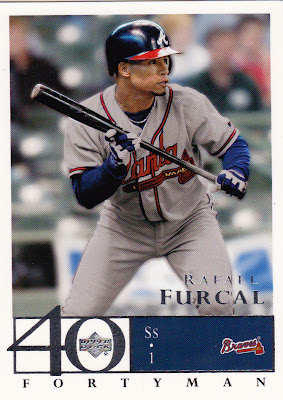 It's been more than a week since the end of the World Series and I'm still pouting.

No, not because the Cardinals won. I'm over that. It could have been much, much worse.

What I'm still stewing over are the ex-Dodgers on the Cardinals. I know it's been awhile since Edwin Jackson pitched for the Dodgers, but it was only in 2010 when Ryan Theriot was being his scrappy self for L.A. and just this past summer when Rafael Furcal was finding new ways to hop on the disabled list with the Dodgers.

Were they that crucial to the team that the Cardinals ended up winning the whole thing? And if not -- which I suspect is the case -- then how'd they get so lucky? When is a random assortment of "nothing specials" going to formulate on the Dodgers' roster and bring my team a championship?

I'm getting more and more impatient that the Dodgers haven't won a title since 1988. Yeah, I know. Cubs fans. Blah, blah. But there really aren't a ton of teams that have waited longer to win the World Series than the Dodgers. The Cubs, Indians, Pirates, Orioles, Tigers, Royals, Mets, Rangers, Astros, Brewers, Padres, Mariners and Expos/Nationals have waited longer. You might think that's a lot, but I don't like that the Dodgers are keeping company with expansion teams.

It's in times like these that I start making lists.

This particular list is almost the opposite of the list in which I chart the unfortunate players who left a team right before they won a World Series.

This list keeps track of the lucky former Dodgers on each World Series championship team since the last time the Dodgers won the World Series.

I will be keeping this list until the Dodgers win again. I hope that means you won't see the list ever again after 2012.

So here are the ex-Dodgers who ended up winning rings -- NOT WITH THE DODGERS:

1. The 2009 Yankees didn't have any ex-Dodgers on their team when they won, but Angel Berroa and Brett Tomko did play for them before getting the boot before the postseason.

2. The 2004 Red Sox also utilized ex-Dodger pitchers Terry Adams and Pedro Astacio, but very briefly, and neither made the postseason.

3. Mike Sharperson also played for the 1995 Braves but only in seven games.

1. I remember the 2007 Red Sox team well. Former Dodgers all over the place. I'm glad there was a team like the Rockies that I disliked to distract me from how pathetic the Dodgers looked letting players go who would go on to win rings.

The Red Sox, in fact, have had a lot of key players who are ex-Dodgers, specifically in 2004.

2. Chad Curtis, Darryl Strawberry, Dave Stewart, Mariano Duncan, Alfredo Griffin and Dennis Cook have all won multiple Series rings since the last time the Dodgers won a championship. I'd throw Jose Vizcaino in there, too, but he didn't play much for the 2006 Cardinals.

3. The A's pitching staff in 1989 is an ode to the Dodgers' farm system with Stewart and Welch.

4. When I look at the 1997 Marlins team, it's amazing how many went on to play for the Dodgers very soon afterward. Devon White, Gary Sheffield, Charles Johnson, Bobby Bonilla, Jim Eisenreich and Kevin Brown. FOX florked that one up.

I'm not ready to say that there's a black cloud hovering over Dodger Stadium. Not after the team rallied in the second half of the season despite the doom and gloomers all around them.

But until my team can win a championship, I'm going to attribute this list less to a World Series team finding the right chemistry and more to ineptness by the Dodgers.

Hope the new owner has got a clue.

I'm pretty pleased with the way everything is arranged now. Kershaw gets a little more play, and Mr. Met a little less. You can see the all-star star on Cey's card. Halladay is hanging out on the corner now and we can see just about all of Jackie.

I've decided that I'll probably be interchanging banners every few months or so. They're pretty easy to make now and I'm happy that even though I change the cards, the feel of the blog stays consistent.

So, you'll see Thumbs-Up Billy back eventually, along with a few other characters.