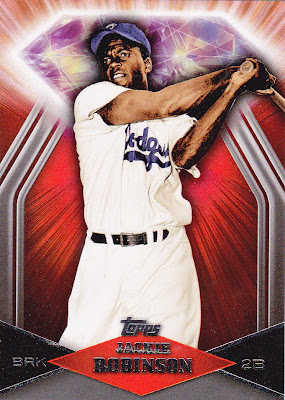 I received this card from Cardsplitter a little while ago. He's the same guy who's threatening to throw out cards (don't treat the threat lightly, he's already done it once).

He guessed that I owned about four of this red diamond Jackie Robinson already. It turns out this is the first one I've owned, which is a bit surprising to me as well, considering how well I've done acquiring Jackie Robinson cards lately.

Not a day goes by without a Robinson finding its way to my door. A couple even arrived in my mailbox yesterday. I have a few more cued up and ready to go from recent trades. I landed a handful at the card show last weekend, and went over 100 unique Robinson cards with my purchases there. I fully anticipate acquiring another Robinson today. I don't know how or when, but it's going to happen. It's Jackie Robinson Day after all.

I'm acquiring so many Jackies because Jackies are everywhere. I can be as cynical as I want about it, and I have, but the truth is I've rethought it, and it's a good thing that there are so many Robinson cards. Unlike some of the athletes that Topps is forcing down collectors' gullets, Robinson deserves to be recognized as often as he does. His claim to fame isn't hitting legendary blasts or being able to drink anyone under the table. His claim to fame is taking the viewpoint that everyone had about race and humanity and "can and can't," flipping it in the air with quiet, dignified defiance, and saying ever so effectively, "here is how you should evaluate people now. Please note that skin color isn't on the list anymore."

And just about everyone listened ... eventually.

So, really, Robinson deserves as many cards as Topps, and whoever else is in the business of printing cards, wants to print.

A year ago, I was whining that I did not own a card of Robinson that was issued during his career. I've since landed one of those cards. I suppose if I didn't have one of his '50s cards, I might not be as comfortable with all of the posthumous card releases of Jackie. They would only remind me of the hole in my collection. But envy and want are terrible things to associate with Robinson's legacy, so I'm glad that's behind me.

That leaves me to happy little tributes to Robinson by recognizing his uniform number.

Robinson never played for the Los Angeles Dodgers, which is the team that I am recognizing with my uniform number series. But if you're addressing the number 42, then you have to mention Robinson. Because going back to the 1930s, when player numbers became common, only three Dodger players have worn the number 42.

The first was pitcher George Jeffcoat. He pitched in 62 games for the Brooklyn Dodgers between 1936-39. He wore No. 42 only in 1939, a year in which he pitched just a single game.

The number was not used for a major leaguer again until Robinson in 1947. He wore it every year through 1956 when he retired after the season.

The Dodgers would eventually retire his uniform number in 1972, 10 years after his Hall of Fame induction and a few months before his death. Nobody for the Dodgers has worn it since, and, famously, Mariano Rivera is the only player in the majors to still wear the number.

But there is one player who wore the number for the Dodgers after Robinson's retirement. I actually picked up a card of the player at the card show last weekend, totally unaware of the significance. 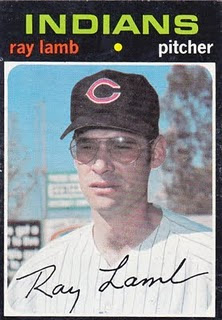 Ray Lamb was a pitcher for the Dodgers and Indians between 1969 and 1973. He threw mostly in relief. He was dealt to Cleveland in 1970 with pitcher Alan Foster in exchange for catcher Duke Sims.

But Lamb is forever recorded in the Book of Semi-Interesting Facts That You Should Know as the only Dodger to wear the No. 42 since Jackie Robinson wore it. 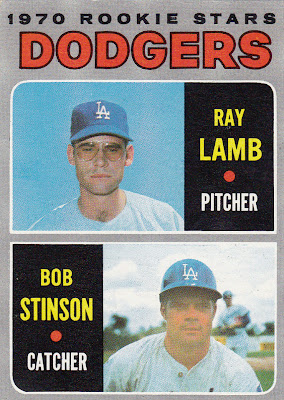 So those were the inhabitants of No. 42 for the Dodgers, two pitchers who barely made a dent in their Dodger uniform, and a guy who turned the entire, freakin' world upside down.

Enough of this No. 7 Mantle crap. Topps should be dedicating No. 42 to Robinson every year.

carlsonjok said…
Since I got two former Negro Leaguers from the Transmogrifier, I have been toying with the idea of trying to collect cards from the players who made the jump from there to the Majors. But, Jackie Robinson card's are probably a little too rich for my wallet.
April 15, 2011 at 7:26 AM

1967ers said…
I'm normally not a real fan of modern cards of vintage players, but I like that one. Very nice.

Though I focus primarily on OPC and that's enough to keep me busy, I wanted to pick up a few cards older than '65. I refused to get anything until I could get my hands on the one I wanted most - and that was #42.

Jim from Downingtown said…
Ray Lamb? That's weird. Usually, the clubhouse guy is the keeper of the "unofficial" inactive numbers.

With all the "good" pitchers (since pitchers usually wear the numbers in the 40s) playing for the Dodgers over the years (Don Sutton, Bill Singer, Ron Perranoski, Claude Osteen, Jim Brewer, Bob Miller, Phil Regan, Stan Williams, who else?) how did they all avoid getting #42?

If the clubhouse guy was holding it back, how was someone of Ray Lamb's stature able to score it?
December 6, 2011 at 1:59 AM