July 08, 2010
I received these three "Vintage Legends" cards recently in a couple of trades: 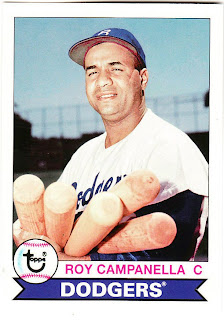 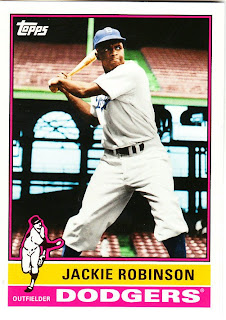 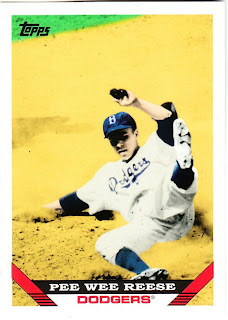 The Campy card came from Marie at A Cardboard Problem, and the Robinson and Reese cards are from Brian at Play at the Plate. I don't have too much to say about them. I already expressed my views on the Robinson card.

The Vintage Legends cards are semi-annoying/semi-fun. Depending on your viewpoint, I guess. Topps is a little too giddy about playing the "what if ..." game lately, and I think it's time to stop now. But I can't get too cranky about these.

Instead, just to amuse myself, I wondered how well these cards would fit in with the sets that they resemble. Robinson is pictured on the 1976 Topps design, Campanella on the 1979 design, and Reese on the 1993  design. How would they look (or "stack up" as the back of these cards say) with other "real" 1976, 1979 and 1993 cards.

Let's get a looky: 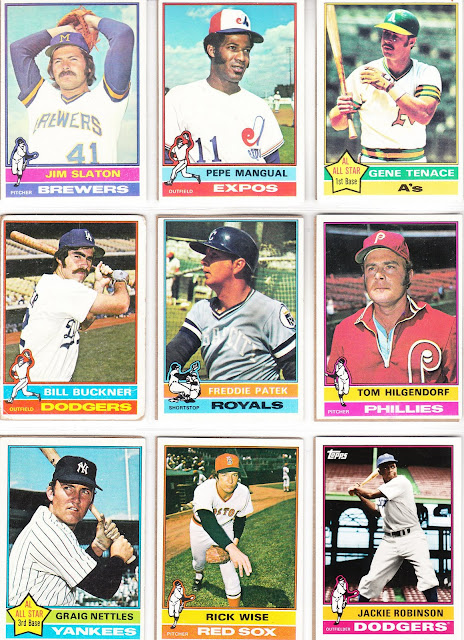 Here is the Robinson card with eight cards in the 1976 set. Note the pitcher's logo Robinson features even though he never pitched. The Robinson card also displays the Topps logo, which '76 Topps did not do. 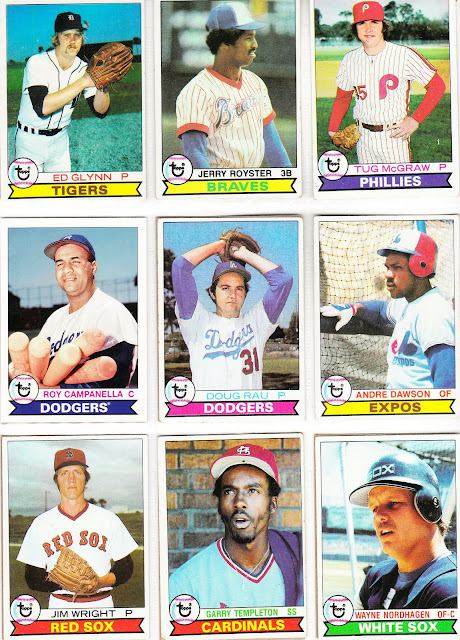 Here is a sheet of 1979s, with Campy peaking out in the middle left. Again, the color scheme is off for the Dodgers. Doug Rau, at center, shows that the 1979 Dodgers cards featured a pink bar, not purple. Campanella's purple bar was used in '79 by the Phillies, as you see by the Tug McGraw card. 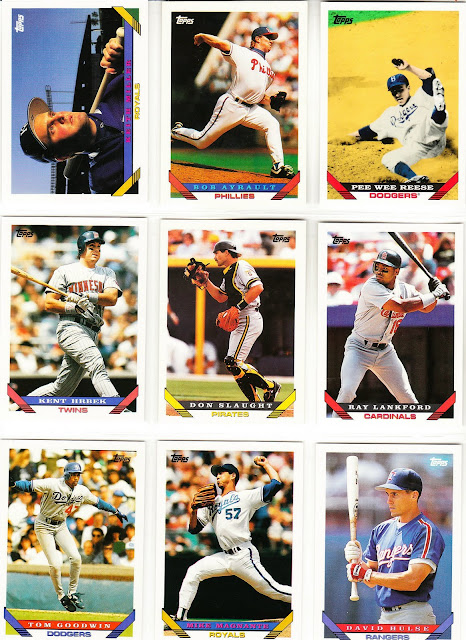 Same deal with the "1993" Pee Wee Reese, sitting in the upper right corner. Down in the lower left corner is an actual 1993 Dodger card, Tom Goodwin. The Dodgers' color scheme in 1993 was blue and red. But Pee Wee is featuring red and brown. If you look below the Reese card, you'll see the Cardinals' Ray Lankford, displaying red and brown. So Topps used Cardinals colors for the Reese card.

My question is why did Topps use different color schemes than what was used in the original sets?

My only answer doesn't hold up. I thought it might be so collectors wouldn't confuse the Vintage Legends cards with actual cards from the sets they represent. 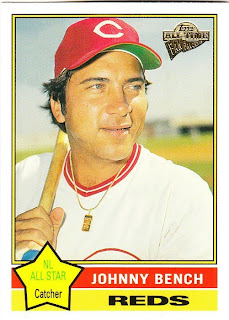 I was looking on ebay one time and I saw that card displayed. But the ebay seller was claiming it was the 1976 Topps Johnny Bench card. 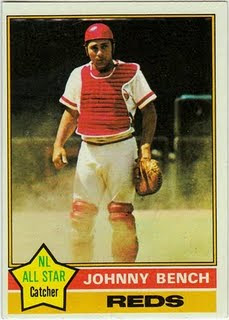 Now, it certainly isn't the first or only example of an ebay seller attempting to deceive someone. But I can't help but think: what fool wouldn't notice the "All-Time Fan Favorites" stamp on the 2004 card?
Perhaps, changing the color scheme of the Vintage Legends cards was Topps' way of saying, "These aren't real 1976, 1979, 1993 cards!"
I don't think that's the reason though, because I don't think that's enough to differentiate those cards from the actual 76-79-93 cards. I mean, there was probably some dip who ended up buying that Bench Fan Favorites card because they thought it was the real 1976 card, foil stamp or not.
And then there are all those Vintage Legends cards in which the set didn't have a particular color scheme for each team (2001 Topps, for example).
So, I have no idea why the color schemes are different for the Vintage Legends cards.
Is it so Topps can get some fool blogger to babble about it for 700 words? Maybe so.

Orioles Magic said…
What a great breakdown about these cards. You always take it farther than I do, and it make for a great perspective on everything.
July 8, 2010 at 4:17 PM