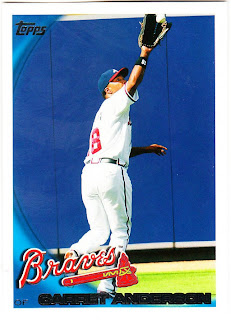 Well, the poll has spoken. The 2010 Topps set is now known as "the wave set." I'm still partial to "binoculars set," but "wave" works for me, too. I'll add it to the Define the Design sidebar list soon.

I'm featuring the Garret Anderson card because he is now wearing Dodger blue. The Dodgers signed him as a non-roster invitee and are looking to either him, Brian Giles or Doug Mientkiewicz for some left-handed pinch-hitting.

I always liked Anderson when he was with the Angels. He's not even close to the player he was then and is on the verge of retirement. But as long as the Dodgers don't put him in the outfield regularly, I'd be happy to see him make a contribution for L.A.

Anderson is the only one of the three who isn't coming off an injury issue, which is important because I'm already skittish about injury news this season. Russell Martin, you may have heard, is out 4-6 weeks with a pulled groin. 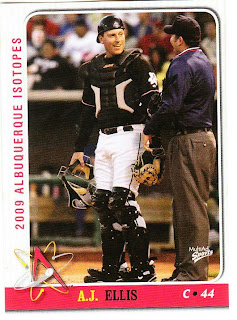 Fortunately, he didn't spend all of 2009 grounding out, like Russell J. did.

Captain Canuck said…
I'm not sure if you're a drinking man or not, but if at any time you see Garret looking for his leather and heading out to left, start. With a bottle. Forget the glass...
March 8, 2010 at 4:33 PM

dayf said…
Ha! I changed my vote from Tsunami to Wave yesterday to push Wave over the top! Lookit that Braves logo surfin' away!
March 8, 2010 at 7:08 PM

dfwbuck2 said…
I was shocked reading the sporting news yearbook that jamey carroll and casey blake are starting this year for them. I'm hoping for your sake that that lineup is the victim of a very early press deadline.
March 8, 2010 at 10:39 PM