March 16, 2010
(After eight straight days of work that included an energy-sapping switch to Daylight Savings Time, I FINALLY HAVE A DAY OFF! Now, if you don't know what I'm appreciating, then there is no hope for you. Time for Cardboard Appreciation. This is the 56th in a series): 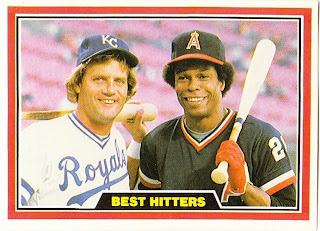 I didn't have much respect for Donruss in the early '80s.

That's a lousy thing to say, but put yourself in my shoes, circa 1981. One spring day, we went to the corner market, looked to our left where the gum and candy was, and saw these wax packages sharing rack time with Topps. One said "Fleer" and the other said "Donruss."

This was before you could find baseball card news whenever you wanted. We knew nothing about Fleer's successful court win against Topps or that it allowed other companies to create cards. All we knew was that these other cards magically appeared with our familiar Topps.

We decided to test them out. The Fleer cards looked bare bones compared with Topps. But they were acceptable. I had a vague recollection of hearing about Fleer cards of the past. That made them legitimate in my eyes.

But Donruss? For one, we had never heard of this Don-russ dude. Secondly, the cards were printed on index-card like stock. They were the flimsiest cards we had ever seen. Third, blurry photos infested the set, and 90 percent of the pictures appeared to be taken in front of the ivy in Wrigley Field. Finally, there were typos and factual errors everywhere.

Donruss was a pretender. I looked at them as pretenders until it produced the 1984 set, which I like a whole lot to this day.

However, the '81 Donruss set, as well as the '81 Fleer set, had something that I had never seen before.

They brought back the "combo card," as we would call them these days.

Those who collected cards in the '60s knew all about the cards that would pair up two or more teammates or all-stars from separate teams. But by the 1970s, when I started collecting, those cards were gone.

So the concept behind the '81 Brett-Carew card was new to me. And I liked it a lot. Brett and Carew were the biggest stars of the day. Thirty years later, I look at it and I can tell they committed some photo magic as Brett and Carew seem to have been pasted together from two (or even three) different photos.

Also it's about the worst caption for a card ever. "Best Hitters"? Why not call it "Two Dudes"?

But the card remains my favorite from the 1981 Donruss set. Even if I could practically fold it into a paper airplane.

madding said…
Nice... I'd never seen this card before, and I bought a few packs of '81 Donruss back in the day. It was actually somewhat affordable even for a kid, probably due to its overall crappiness.
March 16, 2010 at 3:24 AM

zman40 said…
I thought about getting that card signed by George at Fanfest. Then I decided against it. Since it was so hard to get George's signature, I didn't even want to worry about Rod's.
March 16, 2010 at 3:51 AM