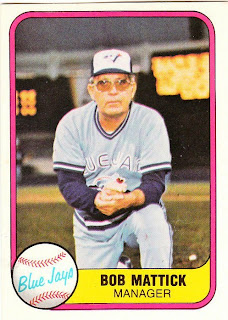 Bobby Mattick, or "Bob" as Fleer liked to call him, wasn't really a manager kind of guy. Oh sure, he managed some in the minor leagues. But he was more of a behind-the-scenes person.

Organizations coveted his ability to evalute player talent, and he worked for a number of teams as a scout or in a player development capacity.

But after three straight seasons at the bottom of the American League East, the fledgling and foundering Blue Jays needed a change. So the Blue Jays named Mattick, their director of player development, as the manager for 1980, replacing Toronto's first-ever manager Roy Hartsfield.

Mattick was 64 at the time, the oldest rookie manager to start a season in baseball history.

The Blue Jays improved slightly in 1980, but still lost 95 games. The following season, strike-shortened 1981, they lost 32 more than they won and Mattick was done. The Jays brought in Bobby Cox the next year, a guy who seemed destined to be a manager. Mattick went back behind the scenes and help find players that led to the Jays' early '90s glory years.

The reason I bring all this up is that when I look at this card, I totally get the feeling that Mattick has no idea what he's doing out there. A random guy with a camera came up to him, said he was taking pictures for some new bubble gum card company, told him to get in a genuflect pose -- because don't you know managers genuflect all the time -- and snapped his picture while the Yankee Stadium scoreboard glistened in the New York night.

Mattick was probably used to sitting in the stands or behind a desk, wearing a polo shirt or a tie and sport coat. But for two seasons, he was a guy in powder blue jammies and a two-tone cap.

As someone who is in a job that doesn't really resemble the job he once had, I totally understand. People ask me to do something I've never had to do before, and I wonder if it is in the job description. One day I'll be asked to wear powder blue jammies to work.

Who am I? Why am I here? I get the feeling that was Mattick.

Maybe it really wasn't him. But that's who Fleer says he was.

Play at the Plate said…
Bobby Mattick, forever memorialized by Fleer AND the Night Owl. He looks like one of the "older" ball boys you see retrieving foul balls at some parks.
March 12, 2010 at 4:25 AM

Dennis said…
From everything I've read, Bobby Mattick sounds like he was a real good man. I believe Toronto's training facility in Dunedin is named after him.
Anyways, cool card!
March 12, 2010 at 9:48 AM