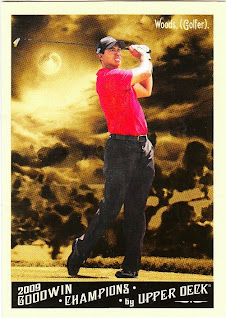 I have been picking up a Goodwin pack here and there lately, even though I am not collecting the set and have all the Dodgers already.

The reason is because I wanted to see if I could snare a couple of moonlight variation cards or whatever they're calling these things. What I call them are "night cards."

I think it's rather fishy that after I start a blog celebrating night cards the following things happen:

a) Topps blacks out the backgrounds of its base set for a variation series that makes it seem like all the photos were taken at night.

b) Goodwin Champions comes up with hard-to-find variations of cards that feature a moonlit night background.

Go, ahead, tell me I have a God complex. But when I want to feel better about myself, I envision Topps and Upper Deck lackeys feverishly scouring my blog, taking copious notes, and reporting back to their superiors who are breathless with anticipation.

The Goodwin moonlight cards seem like night cards to me. So I want a few of them. And wouldn't you know it, the one I pulled is of serial cheater pants Tiger Woods.

I'm not sure whether the interest in Tiger's cards has tanked since the recent unpleasantness. But I know I'd be happy to trade this to anyone who wanted it.

Meanwhile, I'll continue my quest for a Goodwin moonlight shot of a BASEBALL player.

Now, if the Tiger card featured Elin chasing the cheater down with a 9-iron raised high under a moonlit Thanksgiving night, that is a card I'd keep.

capewood said…
I bought a hobby box of Goodwin and didn't get a single one of the moonlight cards. I bought the Ryan Howard one on eBay.
December 24, 2009 at 11:09 PM