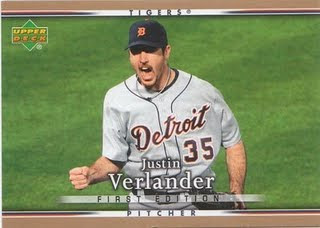 On this date a year ago, I posted this night card of Justin Verlander and started a blog called "Night Owl Cards."

Even though it was just 12 short months ago, I don't know if I can give you a straight answer on why I started this thing. The short version is: I was inspired. After months of reading other blogs devoted to nothing but baseball cards, I couldn't help but think that this was something I could do. I was a writer, an avid baseball fan, and a collector of cards. It seemed like a calling.

And that's what it is to me -- entertainment. I write about what interests me in a way that interests me. The blog is therapy, too. And I've noted the benefits of that aspect, as well. In many ways, this blog is my personality. I try not to get too deep with it -- this is about baseball, after all -- and by nature I am easygoing and have a sense of humor. But I also have a strong sense of right and wrong, can be direct and abrupt at times, and have always been introspective. It sounds strange, but I am a quiet, thoughtful, humorous guy, who also can get loud once in a great while.

And all of this filters into the blog.

I know I never expected to draw the readers I have or make as many trades that I have. For people who care about numbers, I average around 240-250 unique visits a day. It's not a big number, but it still blows my mind. As for trades, I went back through some of my trade folder stuff and figured out I have traded with people in 28 states and three countries. I'm not sure how many blog trades I've made, but it's over 100.

That's the important part for me, the connections I have made with other collectors. This blog is like an oasis within my immediate world. My immediate world couldn't care less about trading cards or even baseball. Football and television and politics and money and general meaningless garbage dominate the landscape of my world. But when I check out the blogs, it's a group of people that only cares about baseball and collecting and (*gasp*) are willing to talk about it for hours. With you, I don't have to argue endlessly like I do with non-converts, saying, "BASEBALL IS NOT BORING! YOU THINK IT'S BORING BECAUSE YOU JUST DON'T GET IT!" That's because you folks on the blogs get it. And thank goodness I found you.

The feeling is mutual, judging by the trades and notes I've received. I enjoy getting notes in card packages. I enjoy getting emails from people who have gone out of their way to do something or create something and then send it to me.

Andy, of Traded Sets, sent this "unlicensed" creation to me the other day in response to a post I made over the weekend, about how Upper Deck should go "oddball" in 2010. 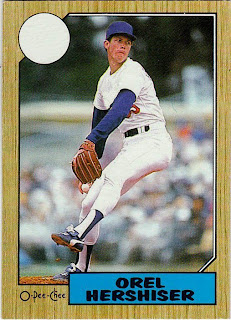 Ouch. 1987 Topps would really suffer with the no-logo treatment, wouldn't it? 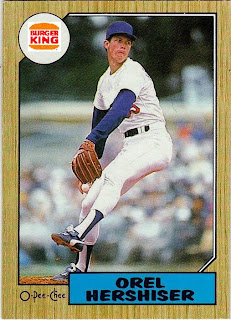 I love a junk-food logo on my card. Notice that I went with the old-school Burger King logo.
Quite some time ago, Cliff of Capewood's Collections, sent me some of his own card creations. And I haven't posted them until now. 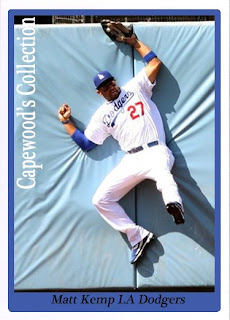 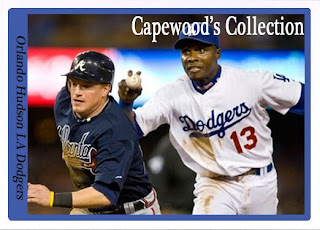 It's a wonderful design, and Cliff picked out some great Associated Press photos to use as subjects. 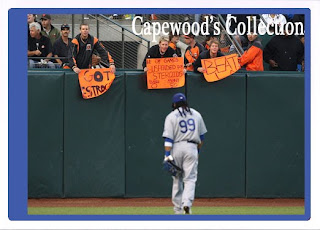 But I guess he couldn't bear to write Manny Ramirez's name on this card. Incidentally, I'd like to remind those Giants fans there in the outfield that they once had a guy with a giant head named Bonds patrolling left field. Glass houses, guys. 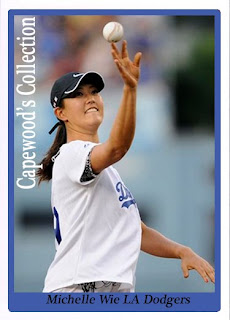 One just for fun, Cliff said. 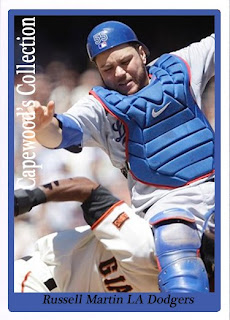 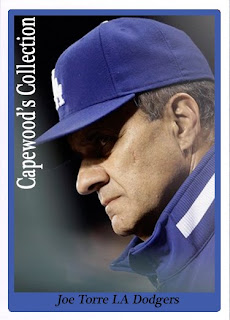 The last two of Martin and Torre are my favorites. Thanks, Cliff!
People also send me photos they've taken at games they have attended. People actually appreciate my interest in night games and use the phrase "night card"! That is so cool!
Jack of All Tribe Baseball has sent me photos a couple of times. He took some photos of an early August game that he attended at Jacobs ... er... Progressive Field. (The "er" is part of the official name). 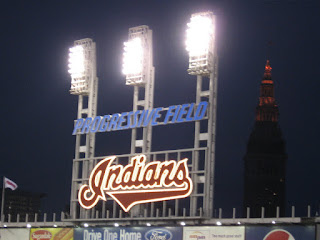 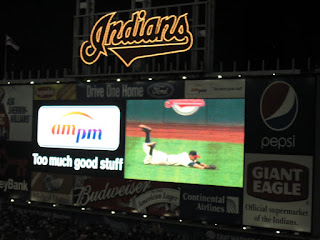 Aren't they great? That's Grady Sizemore making the diving catch on the video screen.
The point to showing all these images is that I appreciate the communication between collectors. I'm not a person who is drawn to large crowds or has to be the center of attention. But I do like people. It's why I am a writer. People fascinate me. Their stories fascinate me. That's why I like history and historical ballplayers, because their lives and histories are more interesting to me than any scientific breakthrough or mathematical problem.
That's why I am still going after one year of doing this blog. Yes, it can be difficult to post sometimes, and, yes, I run out of ideas just like everyone else. But like I said before, I'm meant to be here. A community of baseball fans who collect and trade and enjoy writing and reading other people's writing? Wow.
I'm not going to list my favorite posts from the last year. There's a "Best of ..." link. That pretty much sums it up.
I'm also not going to list everyone who has traded cards with me, given me advice, answered my questions, corrected my mistakes, made me laugh, touched my heart, or simply been a pain in the ass. Because I'm too lazy for that.
So, to everyone, a simple, "Thanks." Don't ever change. And all that other yearbook stuff.
And, also, thanks for reading.
Here's to year two.

SpastikMooss said…
Didn't realize is all started with a night card. Love it, and I'm glad you keep blogging!
September 13, 2009 at 9:32 PM

Nachos Grande said…
Congrats on 1-year...and I agree, I pretty much keep my blog and my "work friends" apart, which I think is for the better too! Blogging needs to be fun or else the blog suffers...and judging by how excellent your blog is on a daily basis, I'm fairly confident that you are having fun!
September 13, 2009 at 9:32 PM

Matt Runyon said…
I couldn't agree with you more about the reasons for blogging. I'm having fun researching the players of the 70s and 80s for my blogs. The only people who know about the blogs in "real life" are my wife and my father.

Play at the Plate said…
Congratulations on an excellent first year of blogging and like many others, I look forward to year 2 and beyond (ok, I'm a little greedy AND I know a good thing when I read it). Thanks for sharing the good stuff with us.
September 14, 2009 at 2:14 AM

beardy said…
Congratulations! This is one of my favorite blogs of all time, and it's been an honor to read your ramblings for the past year. Here's looking at year 2!
September 14, 2009 at 11:32 AM

Collective Troll said…
Senor Owl, For some reason I imagined that you had been doing this since Al Gore invented the internet... I was somewhat that it is only a year. It was been a great year for us readers as you have an amazing blog and we all appreciate that you take so much time to post. I agree that this is therapy, it is to me, too. I don't think that I have ever told someone out in the real world that I blog, but I do love the connections that I have made through blogging with all the great people out there. Here's to year 2!
September 14, 2009 at 1:10 PM

Tom said…
Keep up the good work! I know exactly what you mean by not wanting to tell everyone you know about doing a blog; it's easier to say what you want to say without having to worry about their comments.

While you were posting your first blog I was just beginning a week of not having electricity thanks to Hurricane Ike. Sounds like you got the best out of that deal!
September 14, 2009 at 1:28 PM

Spiff said…
Congratulations on a fine first year. Your blog quality and readership levels are to be admired.
September 14, 2009 at 5:54 PM

steveisjewish said…
Congrats - This is always the first blog I read and in my opinion, hands down the best in terms of content, humor, and just being awesome. when i grow up, I'd like to be like you.
September 14, 2009 at 6:29 PM

BASEBALL DAD said…
Happy Birthday Night Owl !! Congratulations on your first year with many more to come.
September 14, 2009 at 10:54 PM

Anonymous said…
Congrats on the milestone and "Happy Birthday", Night Owl. I certainly hope there are many more years to come...
September 15, 2009 at 3:00 PM