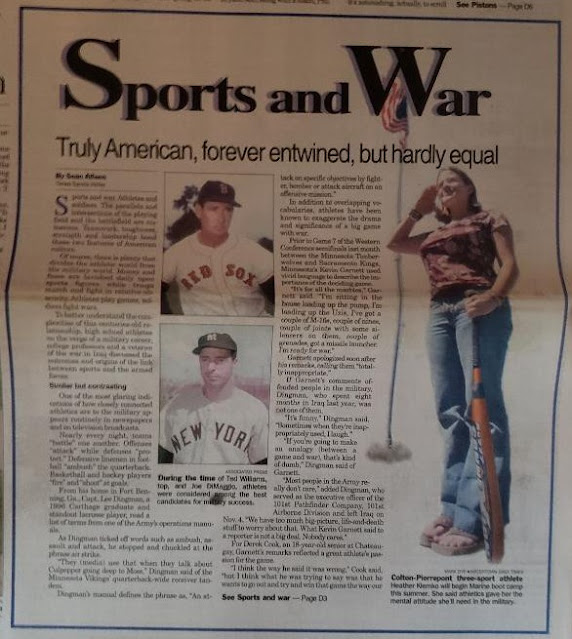 Happy Veterans Day to all who have served our country, including my departed dad, who was a veteran of the U.S. Air Force.
I haven't written a Veterans Day post every November 11th, but there are a few, here and here and here.
For this Veterans Day, I thought I'd do something a little different, and take another cue from a reader. It's the second time this week I've acted on a reader's suggestion. I must be running out of my own ideas!
Anyway, after I posted the layout I created for the Dodgers' World Series victory, someone suggested that I should show off some of the layouts that I've saved over the years.
I didn't think anyone would be interested in that -- we're all about cards here you know -- and I still wonder if I'm boring people who consider newspapers a relic of their grandfather's era or whatever. But newspapers are very alive on a daily basis in my world, so let's take a look at a few of my favorites. (You're going to have to settle for snapshots of actual newspaper copies -- none of this fancy backlit stuff that the kids are used to was available in most cases).
The above clip was a story written by a former sports staff writer around the time of the "War on Terror" when many high school graduates were considering the military for a career. 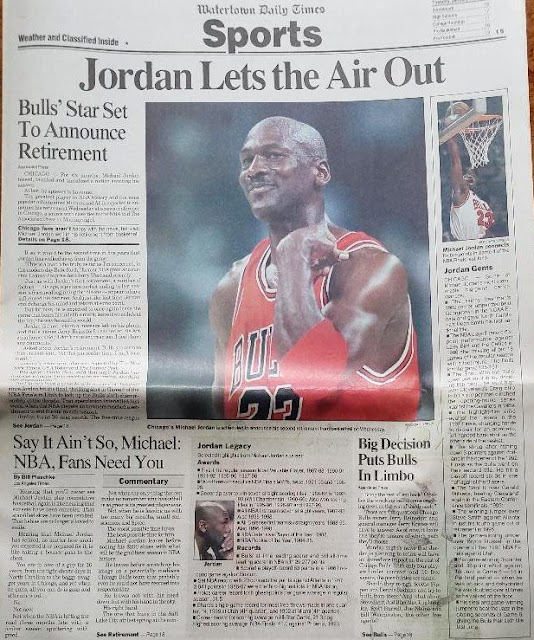 But let's start almost from the beginning.
I've been helping design sports sections since 1994. I had no idea what I was doing when I started out. I didn't go to school for design, I was a journalism major. I had to learn on the fly, through trial and error. We've just past the 25-year anniversary of the moment in which I felt I arrived as a designer. That was when Cal Ripken Jr. ended his consecutive games streak. But I don't have that newspaper copy anymore.
I do have a copy from 1998 when Michael Jordan retired from the NBA. It's one of the oldest copies of something that I designed that I've kept. 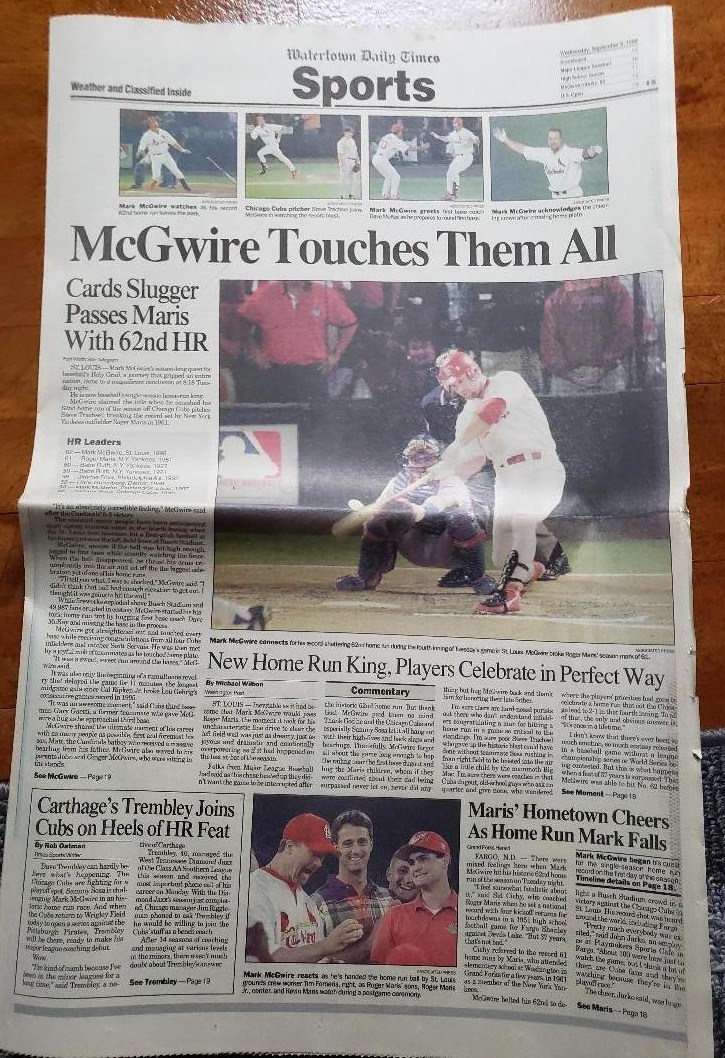 Here is another one from 1998. I showed this on Twitter during the time when the ESPN show on the McGwire-Sosa home run chase was airing. This is the edition I designed when McGwire broke the record (P.S.: these editions look quite primitive to me, as the paper has evolved and my skills have changed). 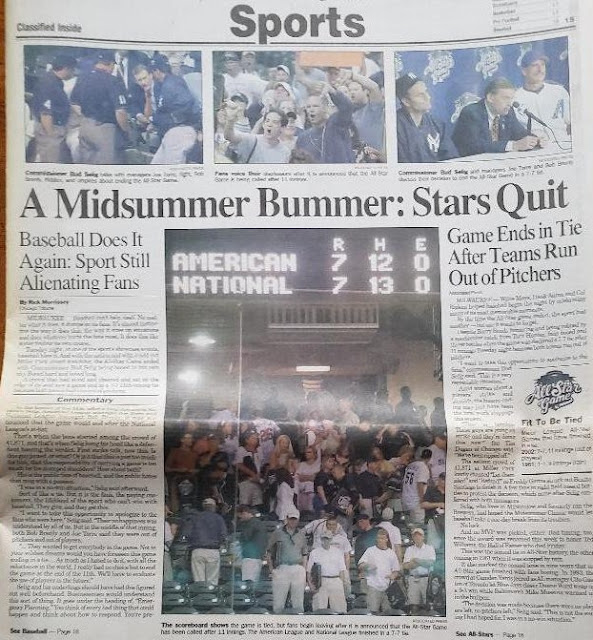 This is from 2002 when the All-Star Game ended in a tie and everyone flipped out. This was back when the newspaper came out in the afternoon. I had to get up very early for my work shift but we had more time to react to what had happened the night before. 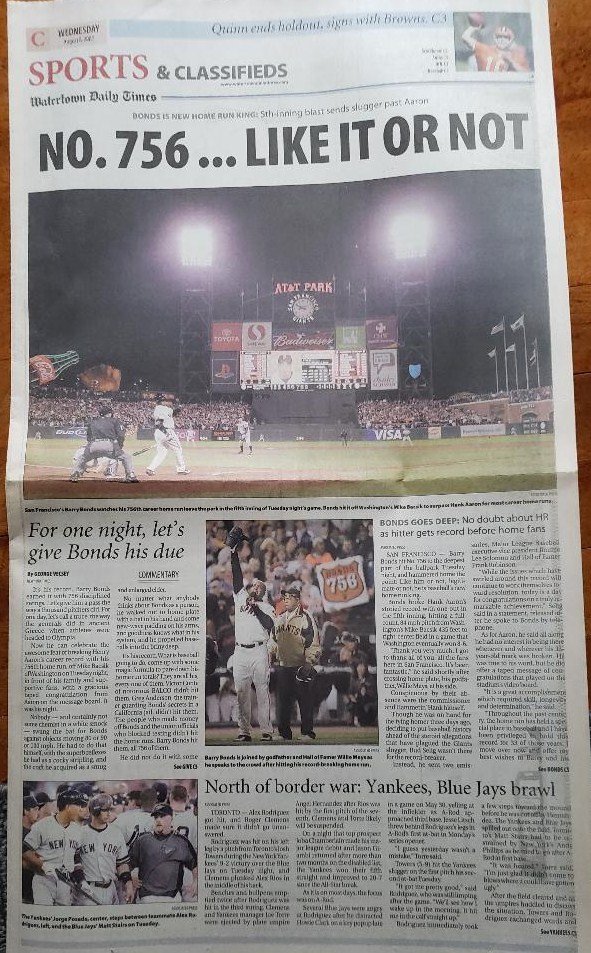 By now -- 2007 -- the newspaper had become a morning edition, meaning I was working in the evening as the games were coming in (the way it still is today). This is an edition that was completely made over at around midnight, between editions.
The earlier edition of this section, which I still have around somewhere (collector's edition!), has the Yankees-Blue Jays brawl as the lead story and photo and some other stories on the page that I don't remember. Hectic night! 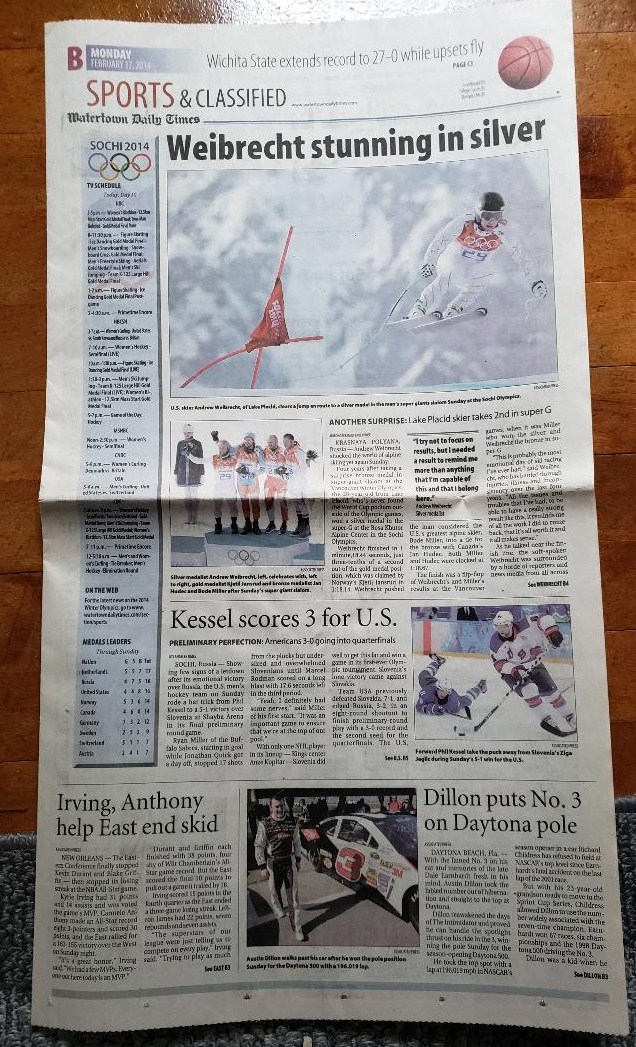 This is a fairly typical Olympic edition at our paper. It's a little scary realizing how many Olympic Games I've designed for the paper over the years.
We treat the Winter Olympics as prominently as the Summer Olympics, if not more so, because we live in a winter environment -- Lake Placid is just down the curvy mountain road -- and there are a lot of locals who wind up competing in some bizarre sport like skeleton or ski jumping. 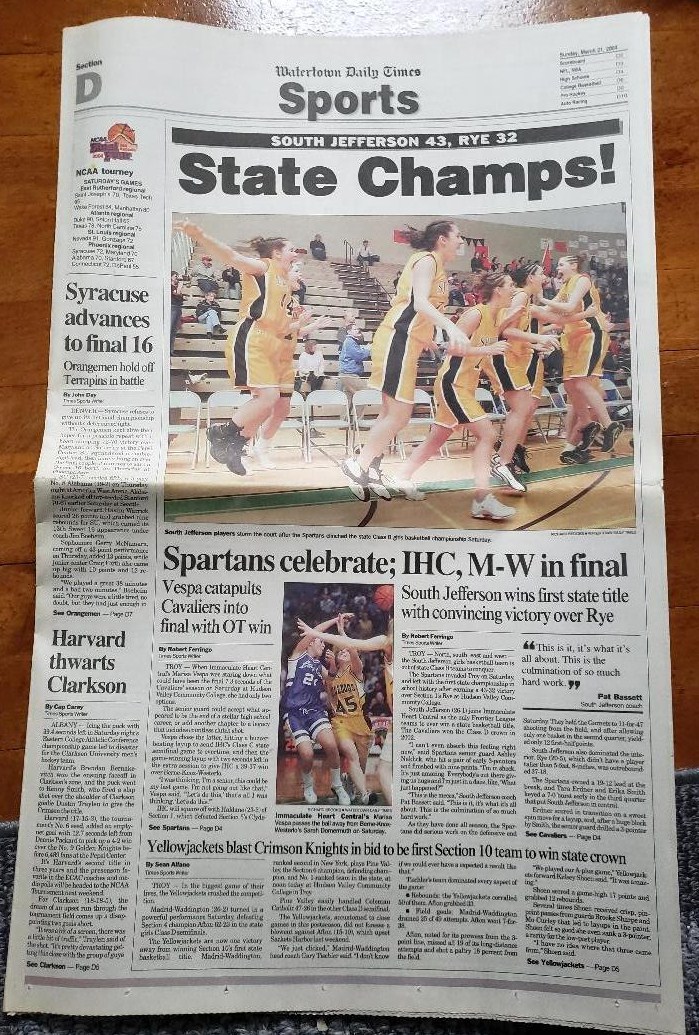 For any newspaper, local news far outweighs national or international news. We try to be as local-focused as possible in the sports department. I didn't scan most of the local-themed papers that I've saved, although that's the majority of what I have, because you guys can't relate to a high school team you've never heard of winning a state title. 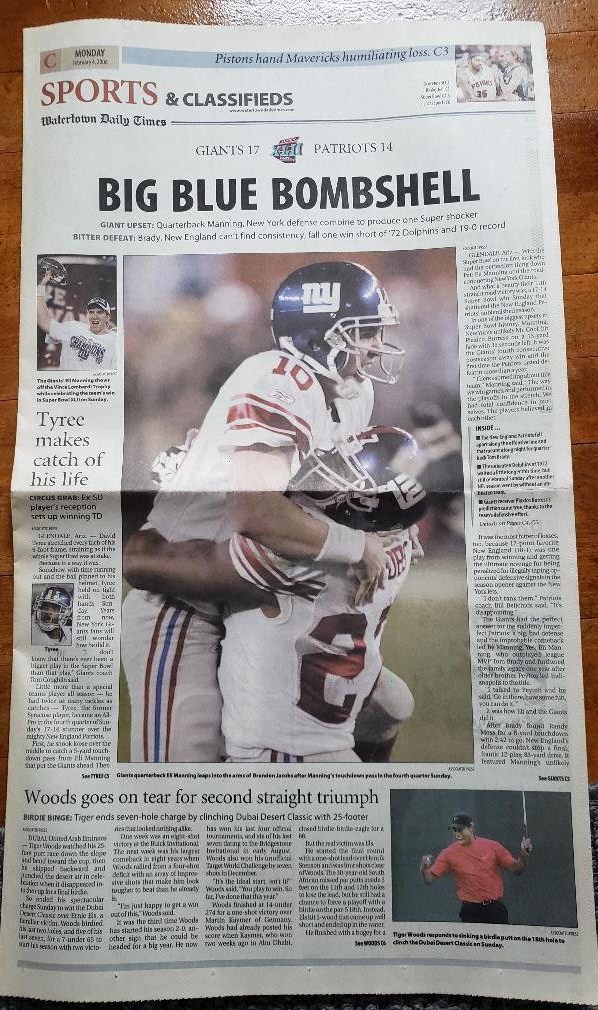 I have designed many, many Super Bowl editions as well. It's one of the easiest nights of the year, since the Super Bowl is one of the last remaining big sports events that starts at a reasonable hour and because the rest of the sports world gets out of the Super Bowl's way every year.
That means the sports staff finally gets to sit back, watch the game and then go to work when it's over. Newspapers, in their continuing fight to stay afloat, go through all kinds of changes and we now have people whose specific jobs are to design the sections. I no longer do that most days.
I still have a say in what the section looks like (I choose all the stories and page positions, select all the photos, decide graphic elements, etc.). But most of my satisfaction these days comes from a well-written headline or story. One of my favorite headlines was when the Kentucky Wildcats and Connecticut Huskies reached the NCAA Tournament final in 2014. 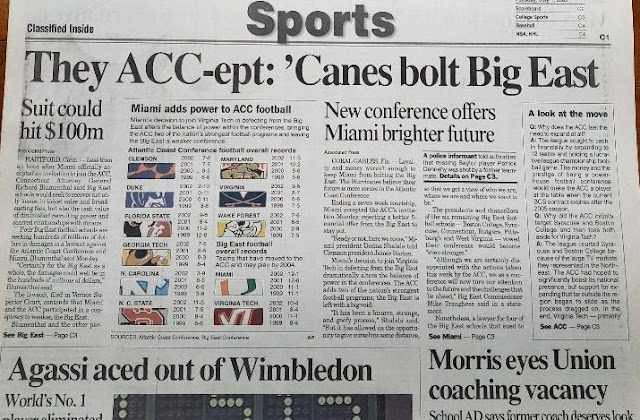 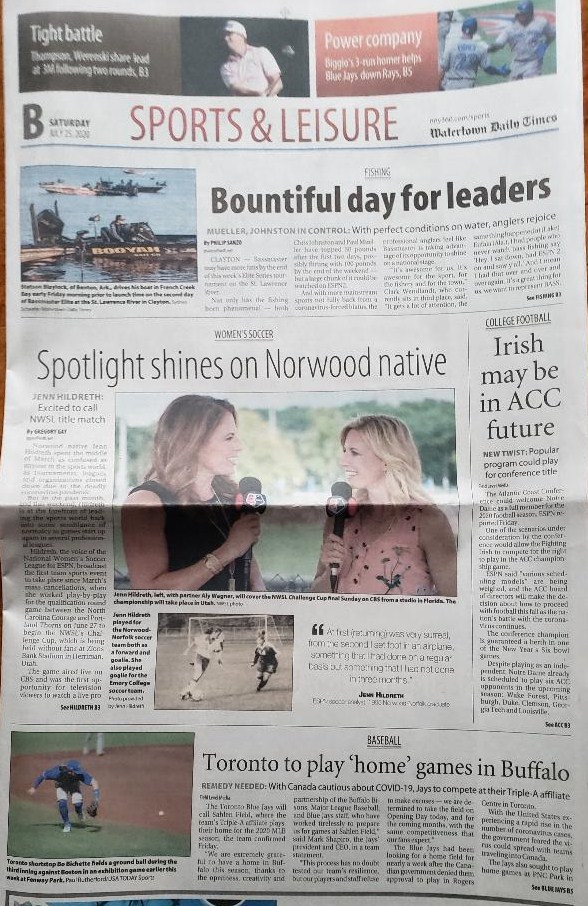 Some of you may have noticed that the sports section has changed its look over the years. That's very observant of you.
It has. It's smaller, obviously -- not in terms of page count (we have far more space in our section than even sports sections twice our circulation size) -- but in width. It's also more colorful. And some of the very strict rules that dominated our newspaper, regarding headlines and layout, have been eased.
The above section gives you a good idea of how it looks now. It's from this past July. I wrote the story on the broadcaster. 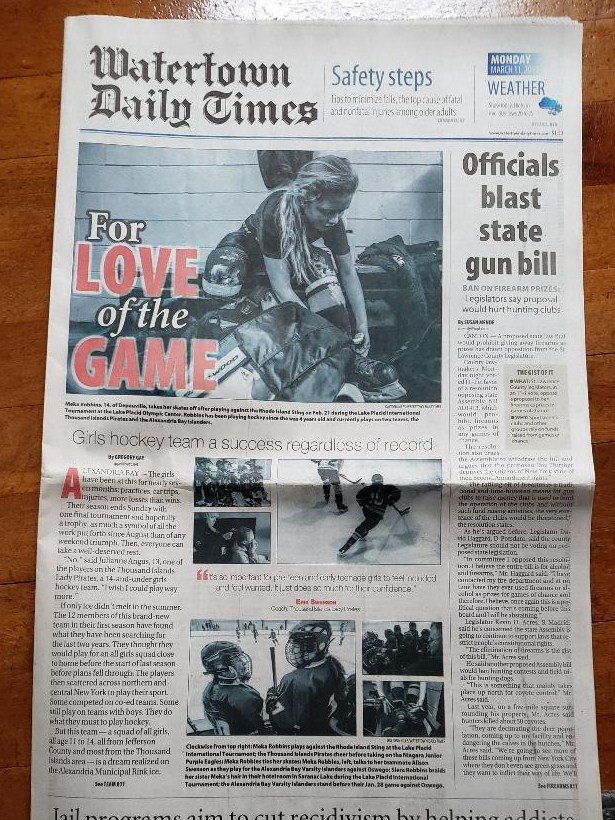 Those are the editions that I save these days -- stories that I wrote that I like. The above, about a girls hockey team, appeared on our cover in 2019. 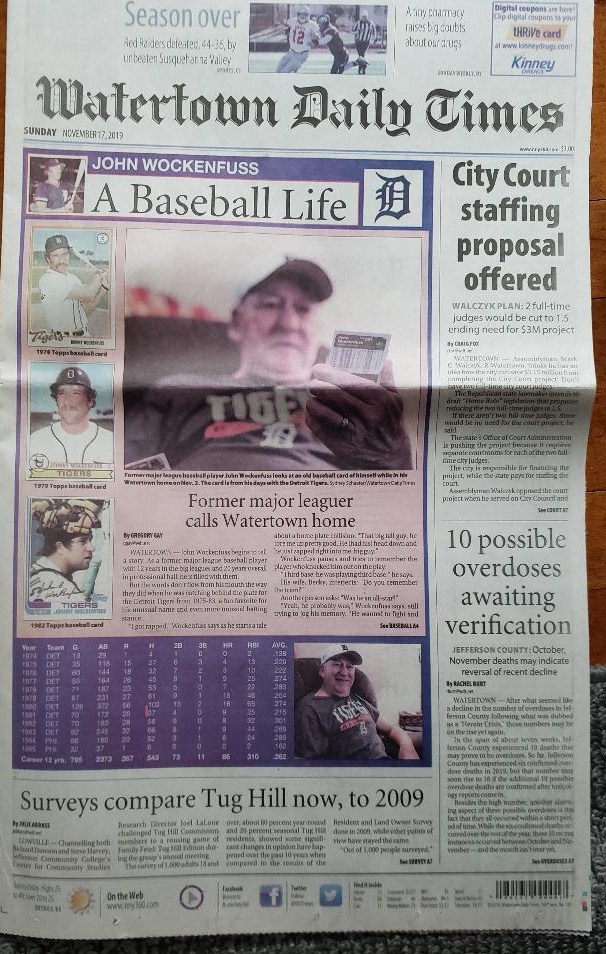 This is the story on John Wockenfuss, which I wrote right around this time last year. Notice my baseball cards, including the one Wock is holding in his hand!
So, that's a little look at what I do, and have done for the past 25 years. Or, that's a look at what I do when the section is at its best (I don't save the clunkers).
I have been in this business in one way or another for 33 years. I hope that I can continue in it until it's time to retire.
Every once in awhile some former co-workers who have moved on will mention on Facebook how long it's been since they left the paper. There are always comments from others who have also left that say something to the effect of: "5 years for me, don't miss it!" "3 years, it had run its course," etc., etc.
I hope I never feel that way. It's not the greatest job in the world for several reasons. But for someone who writes, it's hard to beat. And it's cool to have a timeline in newsprint.

Nick said…
I will be forever jealous that you got to show your baseball cards in a newspaper article you wrote. That's something close to a dream for me.
November 11, 2020 at 8:20 PM

Nachos Grande said…
Your job "show and tell" is way more interesting than mine would be...who wants to see scans of a bunch of Calculus III exams?

Mike the History Teacher said…
I really like a lot of your creative headlines, but my favorite page here is the high school "State Champs!" One of the things I like the most about sports is seeing the sheer unbridled joy that pours out during a championship victory celebration. That moment every athlete dreams of but few are able to realize. When it's a high school or college championship, it means many of them are playing an organized game of their favorite sport for the last time -- and going out on top. What a moment.
November 11, 2020 at 8:37 PM

Steve at 1975BaseballCards.com said…
I have no idea why you’d think this wasn’t interesting to readers. Maybe I’m the odd man out but found it to be one of the most interesting posts you’ve written this year.
November 11, 2020 at 9:27 PM

Nick Vossbrink said…
Very cool. I was absolutely done with my printing job when I left it yet I still miss it. Something wonderful about making things and seeing them all the way through as they get designed to coming of the press.
November 11, 2020 at 9:55 PM

Fuji said…
I grew up reading the newspaper while eating my cereal in the morning. Miss those days. It's been over a decade since I've subscribed to my local paper, but whenever I visit my dad, I'll read the sports section and battle him in sudoku.
November 11, 2020 at 10:35 PM

Billy Kingsley said…
Aww I was hoping you'd break out the microfiche.

I wish my local paper still had a decent sports section. It's mostly down to a single folded sheet these days, two on weekends.
November 12, 2020 at 3:17 AM

bryan was here said…
This was very interesting to me. My daughter is a journalism major as well as editor of the college newspaper, so I understand how everything works. It gives that "fourth dimension" to something we take for granted every day. And as much as online news has proliferated our society, there will always be a market and audience for the printed medium. I am one of those people.
November 12, 2020 at 1:21 PM